We look carefully at this movement of inclusion and hope it will be part of a broader one, towards many other group and solo exhibitions, texts and research projects organized by Indigenous peoples. 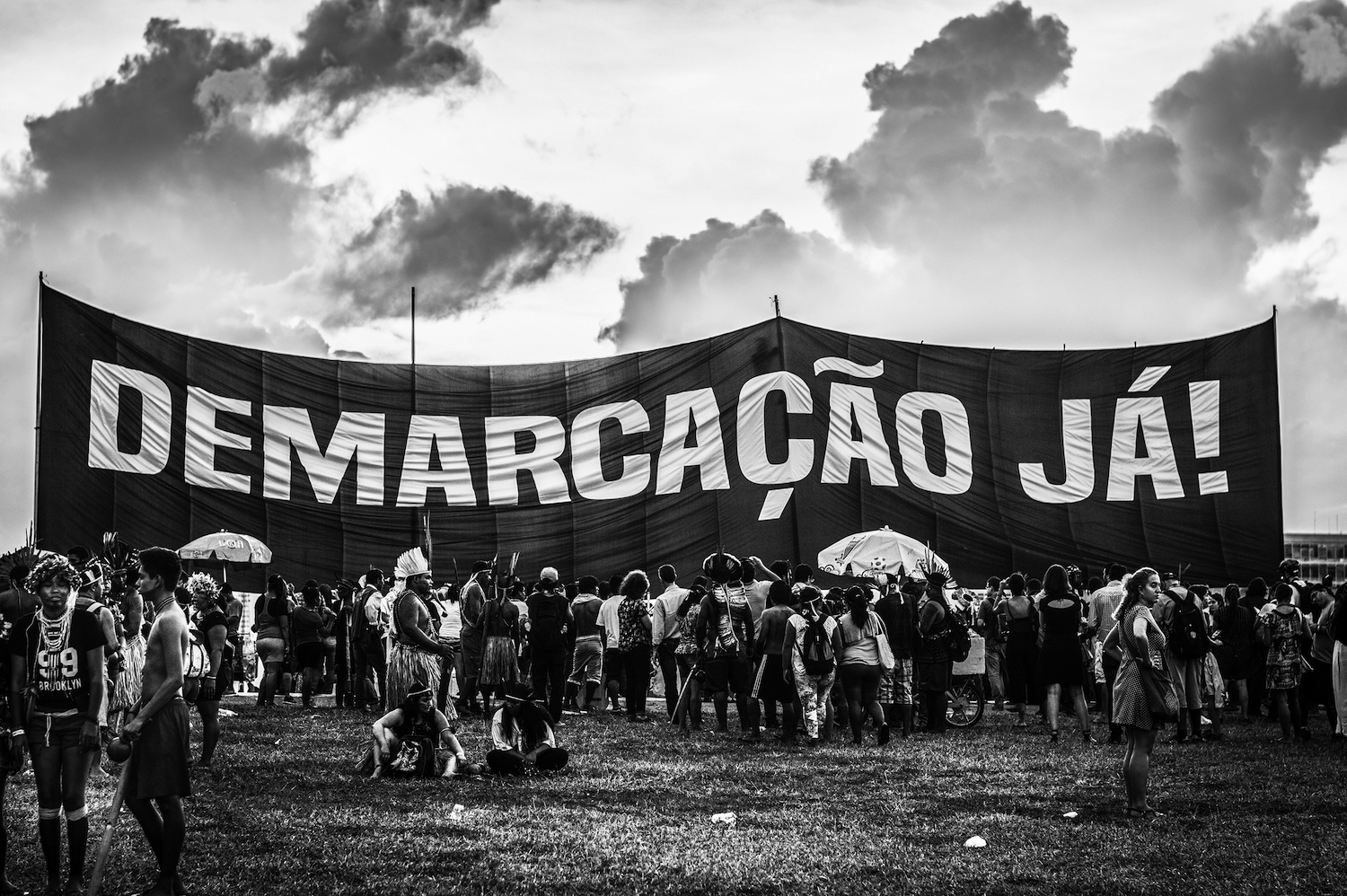 We Know, We Learn

Véxoa: nós sabemos, an exhibition curated by Naine Terena and recently inaugurated at the Pinacoteca of São Paulo, though it was scheduled to open in July. In these three months between that plan and now, we have seen many tragic changes in Brazil: the effects of the COVID-19 pandemic are increasingly visible in a number of deaths that fluctuates but does not stop; the unemployment rate reached a record 14.4%; the fires in the Amazon and Pantanal are regrettably becoming routine and we’re still under the presidency of a man whose private interests and inability to articulate democracy have been known worldwide for almost two years.

There’s a tragedy directly related to the artists participating in the exhibition: the spread of the coronavirus among the Indigenous population of Brazil, which caused around 40 thousand people to be infected, almost a thousand deaths[1] and testifies to the continued inaction of public authorities with regard to the native peoples of this territory that we now call Brazil. Among the various names that could be mentioned, two gained a considerable following in social media due to collective mourning: Vovó Bernaldina (grandmother Bernaldina), a Macuxi teacher from the Raposa do Sol Indigenous Land (state of Roraima) and Feliciano Lana, from São Gabriel da Cachoeira (state of Amazonas).

Véxoa: nós sabemos, therefore, can be seen in the light of these recent events. The opening of the exhibition is combined with a reconfiguration of the permanent collection of the Pinacoteca, one of the largest public art collections in Brazil and with a historical burden from approximately the 19th century to contemporary art. In recent years, the institution has made an effort to decolonize its collection by integrating more Afro-Brazilian, Indigenous, female and decentralized artists from the southeast of Brazil. This exhibition, therefore, echoes other recent exhibitions such as those dedicated to Rosana Paulino, Grada Kilomba, Marepe and Di Cavalcanti. 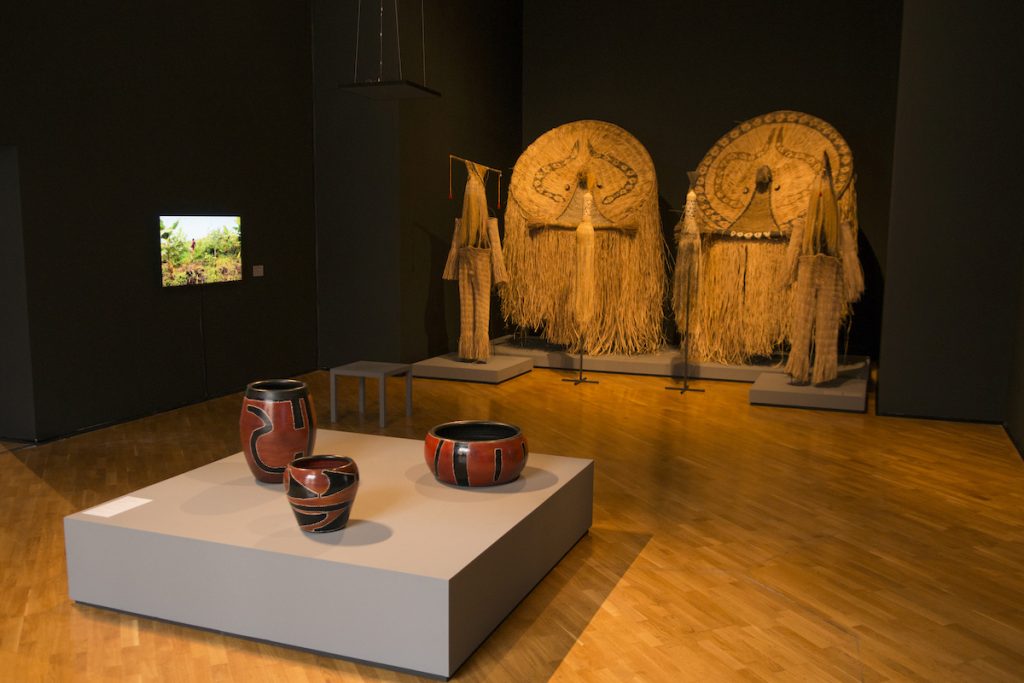 Upon entering the exhibition, the public is presented with two sets of works that seem to activate an obvious expectation of what the production of indigenous art in Brazil would be: the garments made by Wauja artists (from the Parque do Xingu) and the ceramics produced by Yudjá artists (from the Parque do Xingu). Both series of objects are handmade and refer to secular traditions: Wauja masks are used in Apapaatai healing rituals involving dance and different social positions. Made of buriti fibers, their presence at the back of the room attracts the spectator’s body, while reminding us that these pieces find themselves in a context far from the ritual. In front of them, three Yudjá ceramics also attract attention with their paintings made with genipap and urucum, materials that unfortunately are increasingly scarce in the villages and that currently must be harvested near farms, an example of the dispute for land in Indigenous territories.

It’s important to observe these ceramics and masks because, on the one hand, they go against an artisan elaboration that is historically associated with the production of art of the original peoples, and on the other hand, they make visible that one object will never be the same as another. In other words, this curatorial perspective goes against the white gaze and its conception of traditional practices as repetitive, serialized and stagnant in a conception of time based on a modern and colonial time; each vase has a different shape and painting, just as each action in the Apapaatai ritual will be different from the other.

Along with these objects, the intersection between mediums stands out due to the inclusion of Olinda Muniz Tupinambá’s crucial video. Kaapora: o chamado das matas (Kaapora: the call of the woods) surprise the viewer for twenty minutes. How do we classify these narratives? The film shows the body and voice of the director narrating different aspects of her life in the Indigenous Land Caramuru Paraguaçu, in Pau-Brasil, in the state of Bahia. What appears to be a biographical narrative that records everyday aspects of her life quickly takes a turn when her body meets the “enchanted” and the film takes on a tone that seems less documentary and more focused on her cosmologies. 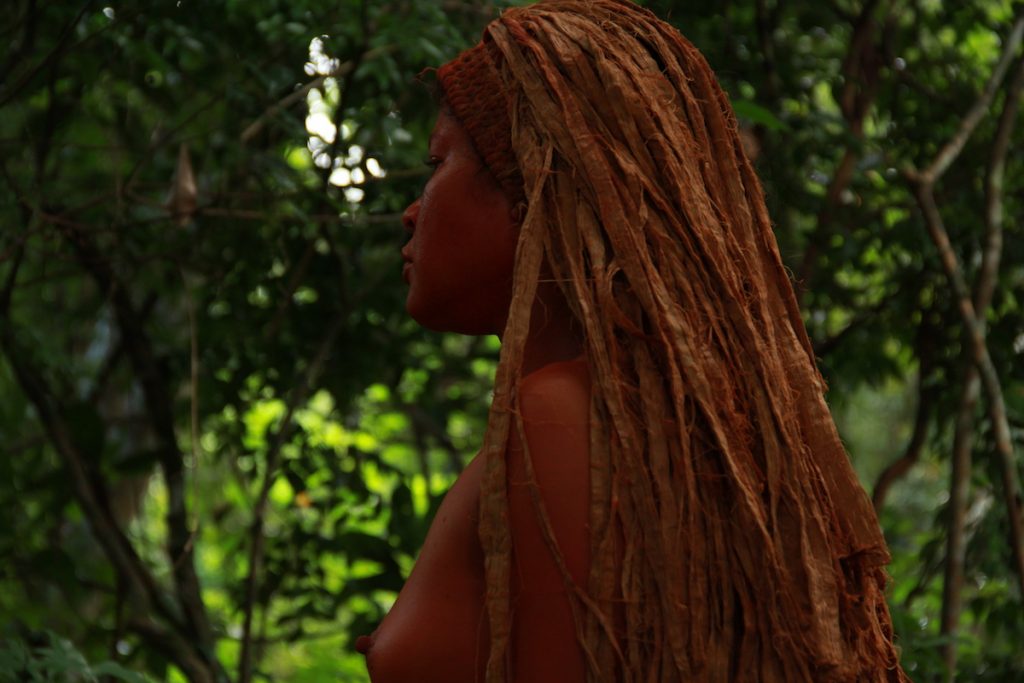 It is in this zigzag between times and spiritual planes where the images make us doubt that a filmed turtle is “only” a turtle or that the roots of a tree are just what a camera can show. The narrator’s body is transformed, an animated fire is sequenced with images of fires and, when we realize it, we are wrapped in a soundtrack that mixes traditional songs with Gilberto Gil, body painting and activism. The limited time of an audiovisual work is the time necessary for a forest to be reborn after its destruction. The capacity of this work to articulate so much traditional knowledge through a medium as globalized as digital video seems to me to be exemplary in terms of the curatorial possibilities of the exhibition: the facts and knowledge of the native peoples of Brazil, transformed into images to compose an exhibition, can take the most diverse forms and move away from a pamphletary, literal and monochordic character.

In the three rooms that make up the exhibition, the audiovisual presence is most notorious and is in line with the trajectory of curator Naine Terena, who has spent many years investigating the relationship between the audiovisual and Indigenous education through her own work as a visual artist where she also uses digital technologies. Some good examples of this are the video series of the Cultural Association of Indigenous Directors (Ascuri), which is made up of Guarani-Kaiowa and Terena directors who produce dozens of videos on traditional practices and the struggle for land. The collective also organizes audiovisual exhibitions and develops web series: knowledge can and should be publicly visible. Conversely, there are also videos by Jaider Esbell where the artist takes advantage of the resources of live video format to perform, produce images and encourage collective creation with his Macuxi family. As you sing in one of the videos, Bem-me-quer, mal-me-quer, quem é que güenta o cajado do pajé? The question remains in the air, but the image in the same video seems to answer with a painted phrase: bosque en pie, fascismo en el suelo [forest in the air, fascism on the ground]. 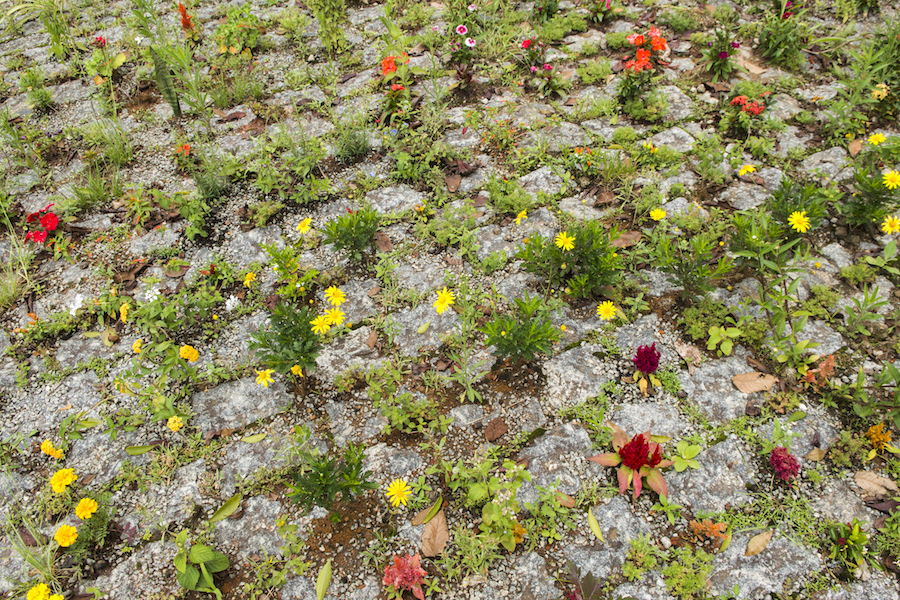 There are other elements announced in Olinda Muniz Tupinambá’s video that resonate in the exhibition: the notions of destruction and rebirth. Denilson Baniwa made a work from the ashes of the National Museum fire in 2018, representing an orchard outside the Pinacoteca, right at its entrance. His gaze seems interested not only in contemplating what turned to dust and which referred to the stories of different peoples of Brazil, but also the possibility of planting new futures. Another curatorial option that also addresses this notion of trauma and iconoclasm was to show the Tamikuã Txihi ceramics that participated in the Regional Plastic Arts Exhibition M’Bai, in Embu das Artes, in 2019, and that were vandalized during the exhibition.

To show these small ceramics that trace images of jaguars and that were fragmented by a racist act is a gesture that seeks not to forget the daily violence that harasses the native peoples, as well as to remember that destroying the material will not be enough to erase images and ancestral knowledge.

Finally, there are a number of artists whose research seems to be related to the possibilities of establishing connections between different agents in time and space on the basis of cosmogonic narratives that, when oralized and/or embodied in images, continue to be constantly transformed. What comes to mind, for example, is the interesting dialogue between the mirages of Daiara Tukano and the extensive series of drawings by her uncle, Pajé Gabriel Gentil Tukano. Daiara Tukano’s transcendental geometry allows us to connect her with other artists in the exhibition such as Kaya Agari and Ailton Krenak, while Gabriel Gentil Tukano’s more anthropomorphic options generate an approximation with the paintings made from traditional MAHKU songs and in Gustavo Caboco’s transgenerational seams. The transmission of knowledge can also occur in images that seem static to our eyes, but which articulate memories and new iconographies. This exhibition reminds us that there are messages with a specific target that escape the universal and global desires that articulate the museum and the art system that sustains it. 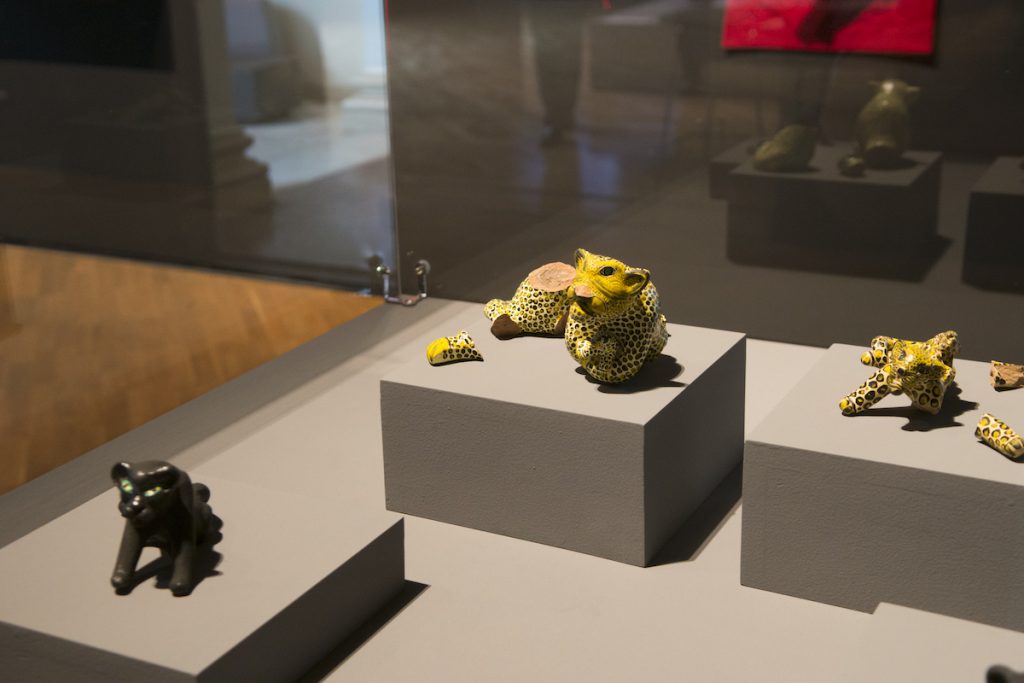 That is why Véxoa: nós sabemos is an essential exhibition for the history of recent art in Brazil; interpreting its title, we could understand this nós (us) as a way of saying “we, the original peoples, know”. From my place of researcher and public which is not part of that speech, I can say that we learn from this exhibition and we hope that this project is not an isolated episode in the narratives of “contemporary Brazilian art made by Indigenous peoples”, as Naine Terena likes to say, but rather part of a broader reparation movement, towards many other collective and solo exhibitions, texts and research projects organized by Indigenous people.

We—all of us—are watching this movement of inclusion with caution and hope that this will be the case. In the way the winds have been blowing in the last years of the visual arts systems in Brazil and in the world, this expectation seems to be confirmed. We need, as Véxoa teaches us, to continue acting in the face of the adversities that accompany the imposition of a post-COVID-19 world.