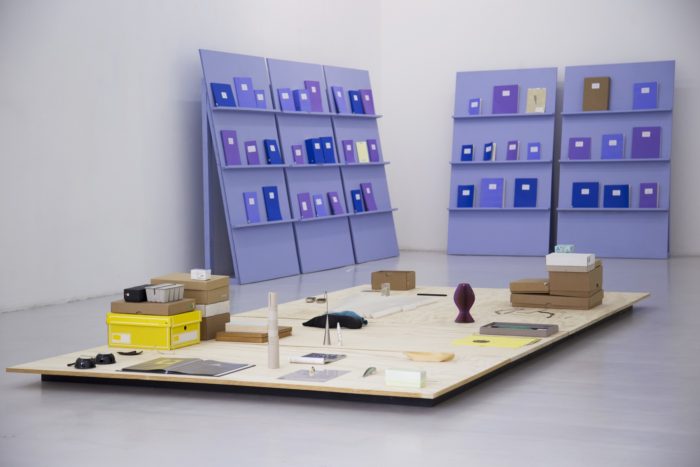 Descent to the limits of language is the ideal (and as such the support) of every true artistic act. An operation that reaches the bottom of that surface cannot claim any other status for itself than that of artwork; but in this case, we’re speaking of an artwork in its eminent and fundamental sense. The show currently on view at Chile’s Galería Gabriela Mistral, entitled Los libros y las cosas, (Books and Things) manages to conform to that dictum in exemplary fashion: it establishes its (visual) world and in the end, displays it as a world made of language. Each and every element in the installation Martín La Roche has produced lead it to be one of the most consistent and beautiful exhibitions now showing in Santiago. After some five years living in the Netherlands, and with various projects completed abroad, the artist now presents work in which the temporal dimension of the world of objects unfolds and places the still essential desire for critical understanding of contemporary art into the phenomenon of art collecting. What we appreciate in La Roche’s work is not just organization and his placement of countless things that express both selection criteria and prodigious accumulation; but as well, a way forward in the construction of a system of relationships that —at the same time it puts certain chromatic and immaterial limits in place— sets up an unusual equilibrium between the quotidian and the artistic realms. 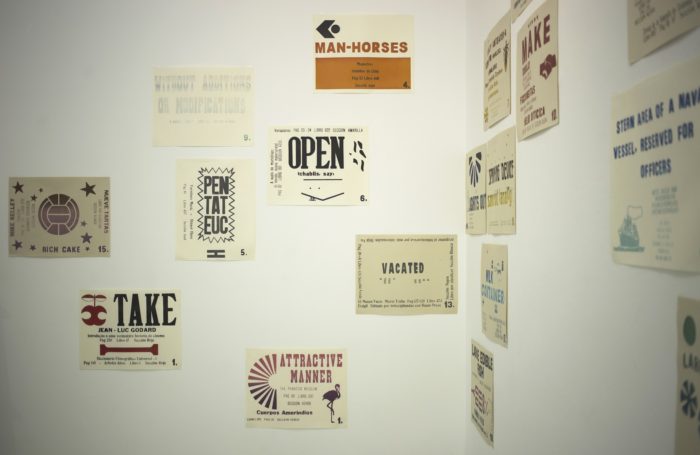 The display strategy is insuperable in its intelligence, simplicity and sincerity. Arrayed just a few centimeters from the floor, three different wooden stages have been set up, to support three sets of objects. This entire layout extends its projection outside the gallery and visually connects with the everyday world of street stalls and peddling. In effect, the gallery building (on Santiago’s central pedestrians-only street) and its oversized storefront-like window that separates it from everyday comings and goings only further intensifies a threshold-like character that connects —and at the same time separates— the everyday and the banal that lies on that side of the street from the everyday and the banal that has been laid out inside the art world. However, the matter is more complex than just a simple game of in or out, since what really kicks off signification is that here this is produced and we can see how that production emerges in the field of relations by which human —too human— things signal, with their banal presence, a withdrawal from an affective world. Artistic experience as an experience of language tells us that all our objects, books, photographs, records, etc., have been engaged for the duration of that withdrawal and therefore simply come to occupy a place, a space, a definitive visual-ness. 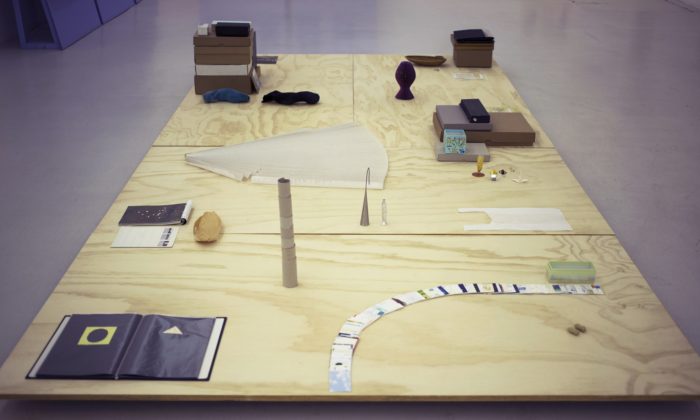 I believe La Roche’s installation, mounted according to its own, cabinet-of-curiosities logic, is not there to expressively attest to whatever theme it is that thrills the collector (including the artist himself), but rather to activate experience itself, an experience that involves the phenomenon of collecting per se, i.e., the desire to accumulate treasures that does not hide the finity of its interior. This artwork, like few others that are part of the local reality, manages to rise higher in its subjective construction of a proprietary aesthetic realm. It weaves together a place for the viewing subject that —once captivated by the smallest of objects— is immersed into the limits of the object-related order that each of the cabinet’s classified spaces possesses. As the exhibition curation so well expresses, “La Roche doesn’t just collect things, he also creates collections to later array them in way that is theirs alone. Using numbers, words and images, he suggests a classification system that has something of the cryptogram’s inimitable logic.” When we say La Roche’s work moves toward language, we say it in the spirit of expressing the reflexive density that orders his collections’ internal creation-procedure, i.e., how the collections live based on the organization of an entire system of signs and classifications. Language, in the artist’s work, is not the extension of the visual world or the place we have to reach to understand what he proposes; on the contrary, language emerges as the immanent cipher that makes ingress to the world of his objects possible, to that place narration leaves behind, that the objects have abandoned, and the place they reach through the story they establish by appearing now as the objects in a collection. 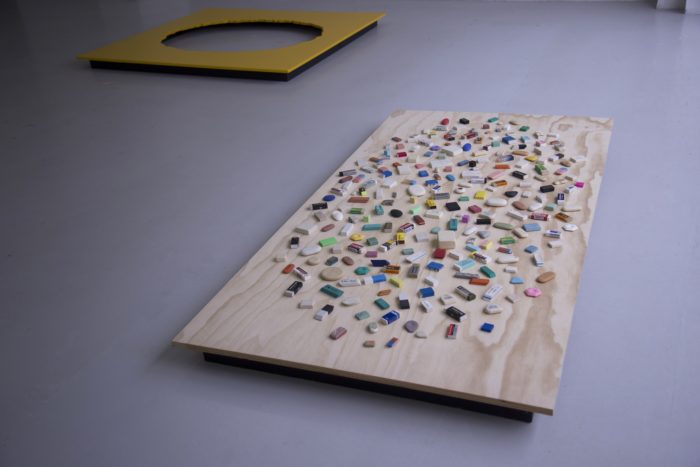 As part of the show’s development and to the degree possible (i.e., before he returned to Holland), La Roche undertook a series of “performance arrays” in which he was able to show audiences some of the 27 boxes that make up his collection. If I’m not deceiving myself (or even if I’m deceiving myself), I had a chance to attend the most intimate and private of these performances and I can assert with entire critical self-satisfaction that what I saw at that opportunity was the construction of an artwork in its complete system of relationships, in its complete articulation of a visual language supported by the simplest act of invitation: letting things be the object of our gaze. The crucial point of the relational moment the artist provides was not simply that he told us about his work or its various objects’, miniatures’ and postcards’, etc., provenance, but rather, the subjective integration process the artwork freely demanded and that there was no way of avoiding. It was the irrefutable proof that whatever we entered into and whatever unfolded before our eyes was a world made of language —a world in which the transcendental force found anchored to things themselves was made conceivable and visible. The artist became a sort of medium through which language used as a means of communication was slowly effaced by the emergence of language as condition, obviously a condition of the artistic experience the artist lived and provided. 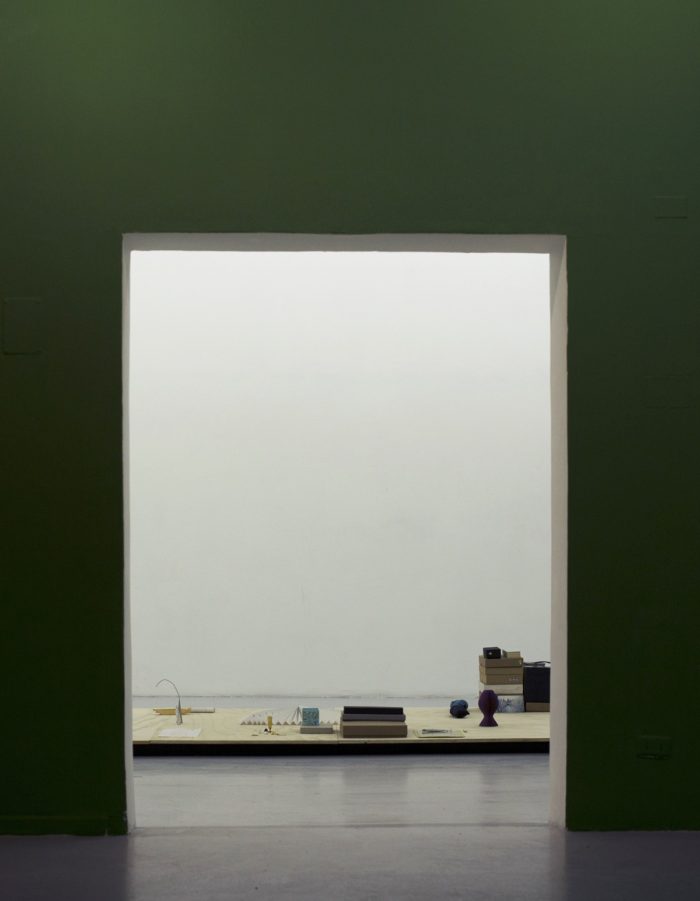 What La Roche’s artworks involve is nothing less than the subjective activation inherent to the visual sensibility of things, to that anonymous condition through which any subject can charge an object with historical/personal value. It goes beyond the object in itself so we can attend to our own relationship with it as a meaning- and value-creating act. The limits of classification can be seen on a material level through the different wooden structures that support the collection’s sundry objects, but one can also appreciate the internal and conceptual ruptures that separate different classification modes. From the floor to the bookshelves that lie near the posters on the opposite wall, a change to the compositional model and the ordering system occurs. Here, at the rear of the main gallery, a structure finally emerges and brings together the most faithful expression of what I believe understanding an artwork as a system involves. This piece that unites books and posters is the outcome of the residency La Roche completed at Cali’s Lugar a Dudas and presents itself as a mini-library that notably synthesizes a singular cataloguing effort. Using the model of that building’s library and commercial posters’ type-printing, the artist produced books according to a strict chromatic order where a mere single sheet is printed: the visual key. What’s more, in the commercial posters, he also incorporated, again according to a rigorously chromatic palette, the textual figure that looking for the book and its revelation organize.

Beyond its aesthetic and conceptual beauty and no less than others, this piece additionally establishes an unusual coherence between language as used in crossword puzzles and the visual design in which is resolved the field of relations that activates this work of archiving and classification. La Roche’s visual artistry is the production of a space and of a simple —and simply notable— experience, because he manages to produce, like some immaterial architect, a unique aesthetic and conceptual construction; a model where objects can return our gaze, exactly as the love poem inscribed on the wall at the entrance to the exhibition states: You don’t need things to see / To be seen, things need you. Within the space of a library sit our objects and our collections, books and things; they are the artworks that, in their withdrawal from the world, move through our lives from the infinitely large to the infinitely small.

César Eduardo Vargas (Santiago de Chile, 1982). Graduated from Art History and Theory from Universidad de Chile. He has collaborated as researcher and theorist in several contemporary art projects at a national and international scale. He is founder and curatorial co-director of the chilean project space Sagrada Mercancía. He lives and works in Santiago de Chile.