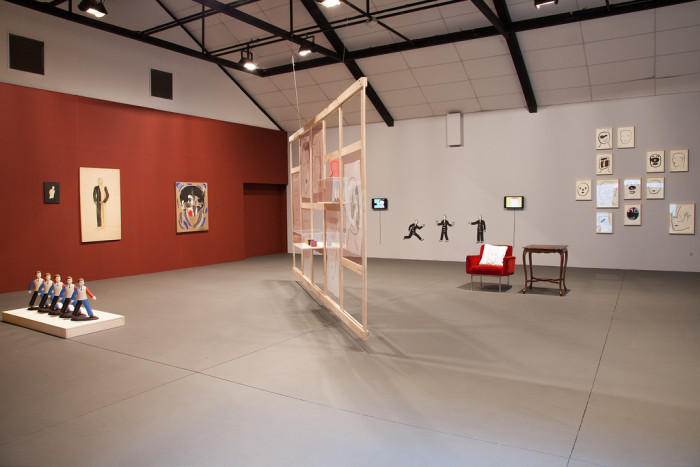 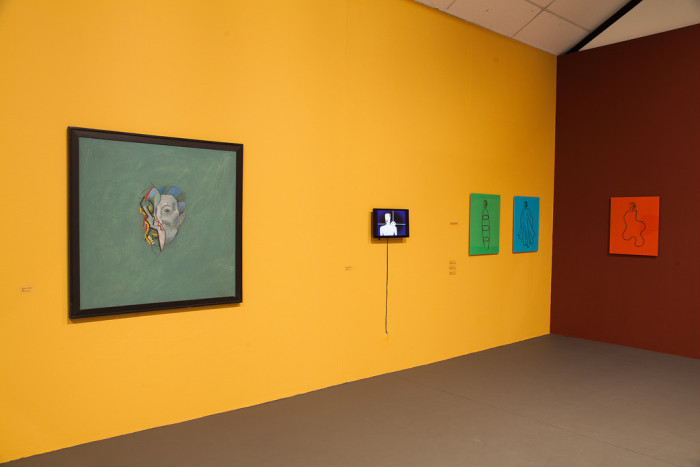 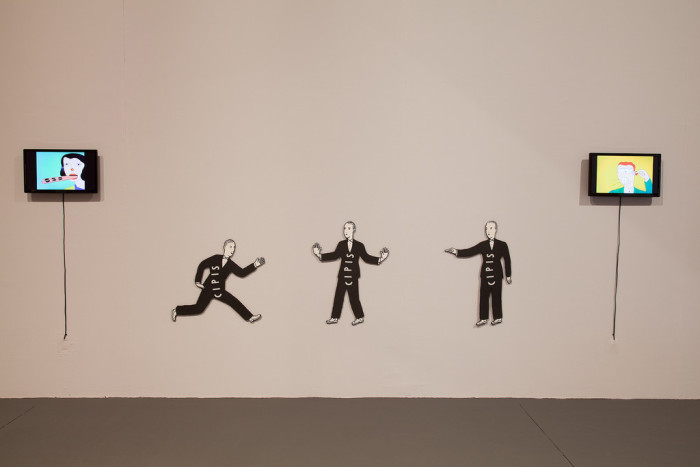 During the last 15 years I have moved six times from country to country, lived on three continents and passed through several different cultures during leisure travel, work and research. There is always a difference in the way people look or do not look at each other, observe or avoid each other and hence the way in which they portray each other.
The principle of the exhibition Marcelo Cipis: faces looking for a face is based on a series of portraits. Over the last decades, São Paulo based artist Marcelo Cipis has produced many illustrations for magazines and the texts of other writers. However in parallel Cipis also developed a body of little known paintings and sculptures.
When the artist participated in the 21st Biennial of São Paulo (1991) with a large installation, he departed from drawings of the ’empire’ Cipis Transworld, featuring a company logo alongside imaginary products such as tires, soap, floor wax, cigars and even chrome chairs. Cipis Transworld followed the logics of advertising, product sales and mail-order catalogs. Largely inspired by the catalogs of the Sears convenience store and with technical support buoyed by his father who owned a printing house, Cipis developed a series of works that appropriated the business empire theme: Perfil Publicitário (Advertiser’s Profile) (1990); Objetos para Franchising (Objects for Franchising) (1991) and the recent series Exército de rostos a procura de um rosto (An army of faces looking for a face) (2013), which lends the title to this show.

The faces present in this show are characters that the artist encounters in real life, or that represent a memory, or a combination of imagination and dream such as Pequeno pesadelo infantil (Small children’s nightmare) (1988). Cipis also refers to artistic influences by creating artist neologisms such as the canvas Pablo Picasso / Diego Rivera (1987) or Reinhardt Newman painted (1987). All these works demonstrate an extraordinary sensitivity in relation to the ‘other’ and the manifold possibilities to portray.

Spanning between an intimate studio production and public presentations, Cipis adopts books, exhibitions or television broadcasts as vehicles for communication. The artist employs various media to give form to his portraits. Bringing together works from the late 1980s until today, the exhibition faces looking for a face includes works produced from oil and acrylic paint on canvas, digital print on methacrylate, painted fiberglass, and even embroidery on fabric. In style and color palette, some paintings evoke the spirit of pop art, while more recent works were developed in black and white.

Thus for example the series X-Ray (2013) and the series An Army of faces looking for a face (2013) evoke the spirit of masks rather than illustrations of real characters. These masks are the expressions that we wear in our everyday encounters sometimes unintentionally; they could be carnival masks or even protest masks, as some works are reminiscent of the Guy Fawkes mask used in the Occupy movement and other recent protests in the Arab world. What unites them is a delicate brush stroke that gives body to the characters and the gentle humor, which permeates these works from different decades.

In addition to the sculptures and works on canvas and paper, animations are presented on small televisions. The animated trailers Voiceover, Dial, Vinyl and Vampire orthogonal were originally produced in 2005 for broadcast on the Planeta Cidade (Planet City) program of TV Cultura. Breaking into the universe of TV and radio, here the artist refers to characters directly engaged with audiovisual production and thus transforms the face of a red-haired presenter into an FM radio of pastel and pop colors or places a vinyl on the tip of the tongue of the ‘vitriol presenter’.

While these synthetic animations repeat on a loop on four television screens, other works with embroidered faces extend the sensation of a domestic context. Emitting a welcoming comfort, these pillows are exhibited on couches brought from the nearby artist’s studio.

For this exhibition Cipis has been collaborating with the São Paulo based architect, poet and writer Joana Barossi on different levels. Works from the series X-Ray (2013) were mounted on the windows of the artist’s studio, functioning as membrane between public and private space. For the exhibition Barossi developed a space divider, which resembles the studio set up and allows the visitor to experience the faces from both sides. Thus, the works of the series earn a third dimension and gain a constant physical presence within the space.

Instead of illustrating texts, on this occasion a series of texts were commissioned that function in analogy to the oeuvre of Cipis. Joana Barossi accompanies the pieces selected for this show with a number of poems, texts that emerged from ideas during the many conversations with the artist. Her literature works – presented in the exhibition space and also forming an integral part of this publication – thus develop a parallel universe to Cipis’ characters.

We have therefore two occasions where faces meet and ‘talk’ to one another: On the one hand there are Barossi’s texts that trigger a complementary reading, at times inspired at times diverging from Cipis’ work titles. On the other hand, there is the imaginary dialogue led by the each visitor when confronted face to face with the portraits on view.

Tobi Maier is a curator and art critic. He lives and works in São Paulo.