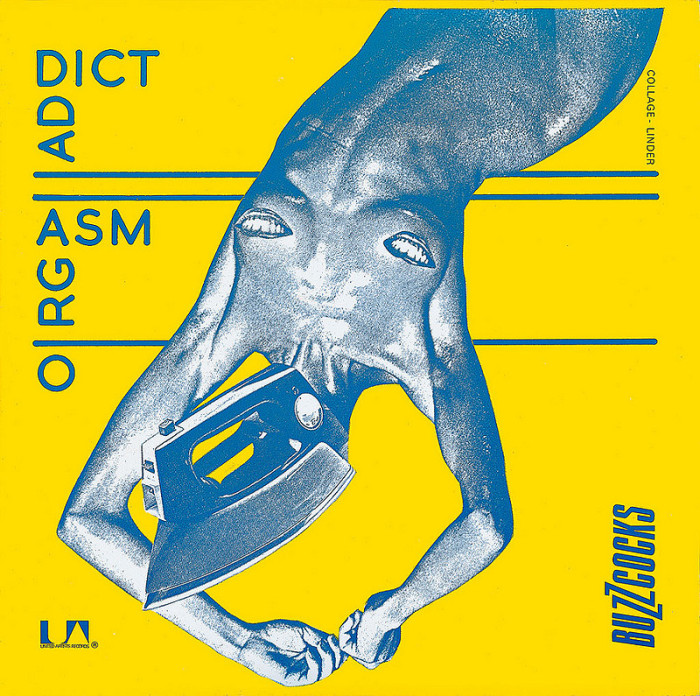 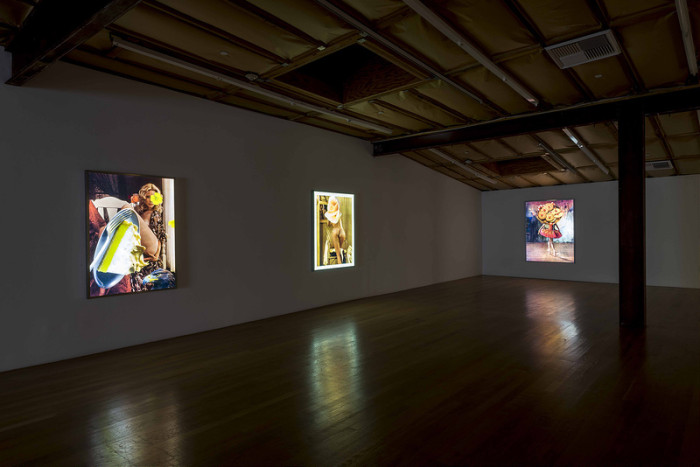 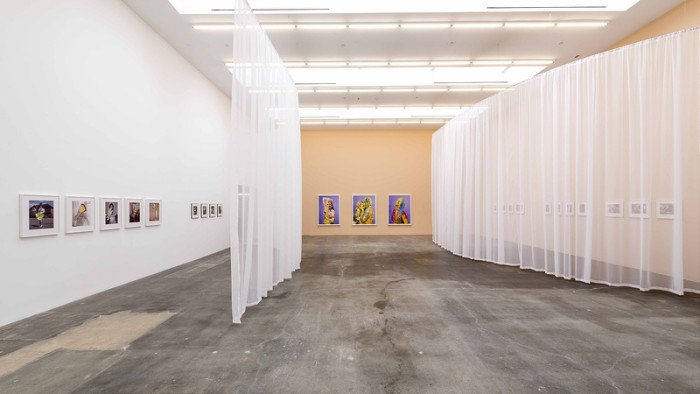 Blum & Poe is pleased to present our first solo exhibition with the English artist Linder, who is internationally renowned for her collage technique, radical feminism, and punk aesthetic. This exhibition marks Linder’s first solo presentation in Los Angeles and includes works never before seen on the West Coast.

Linder’s production from the 1970s demonstrates her early interest in gender performativity and the commodification of the body. Several photographs document the transvestites at Manchester’s Dickens nightclub, a relative oasis where Linder (and Pete Shelley from the Buzzcocks) would visit to escape the hostile city. During this time she created the iconic cover for the Buzzcocks’ single Orgasm Addict, a collage of a female nude whose head has been replaced with a hand-held iron. Linder combines magazine images of women’s sexuality and domesticity to openly criticize conventional female roles and representation. In a suite of twenty-four collages, titled Pretty Girls, female models are merged with household objects in jarring juxtapositions. The women in various softcore poses are mirrored in small, fluid drawings sketched from men’s magazines of the same period.
In 1978, Linder formed the post-punk band Ludus, applying collage techniques to songwriting and performance. Forceful in her demeanor and stage presence, documentary footage taken at The Hacienda club in Manchester shows her wearing a dress made of raw meat. In several 1980s black and white photographs from the SheShe series, Linder uses provocative props, such as bandages, keys, and corsets from the 1940s, in conjunction with her own likeness as a critique of the fashion industry. Additional photographs of the singer Morrissey, who Linder met in 1976, record their enduring friendship and form the basis of her book Morrissey Shot (1992), an intimate portrait of his life on tour in the early 90s.
Recent collages continue Linder’s preoccupation with fashion and dance, such as in a series depicting the famous Russian ballet dancer Léonide Massine and a collaboration with Vogue fashion photographer Tim Walker. In her “splosh” photographs–a fetish term used to describe images of women covered in fluids and/or food–Linder returns to using her body as a performative element to examine the current state of female representation within the media.

In conjunction with the exhibition, Stella Maris Atelier announces the publication of Olfactory Code D4, a new series of scents developed following conversations between Linder, the perfumer Persephenie, and the ethnobotanist Maria Blum, director of Stella Maris Atelier. Linder, who has worked with the principles of collage throughout her life, approached perfume making in much the same way as she might create a montage, choreograph a ballet, or edit a film.
Olfactory Code D4 exists as three separate codes and is a blend of botanicals and aroma molecules. Designed to complement each other, they can be worn singularly, collaged onto the body, or used to scent the environment as mood warrants.
Code I: Mitti Attar, sandalwood, oud, and vetiver.
Code II: A single chord of linden blossom and waxy rose.
Code III: English rose and earth.
For the duration of Linder’s exhibition, the gallery will be infused with the Olfactory Code D4 series at sunrise and sunset, and sample bottles of the individual codes will be on view. Additionally, Three Flower incense, handmade by Syed Mujeeb in India, will scent the galleries throughout the day.
Olfactory Code D4 will be published in an edition of 31 with an original silkscreen signed by the artist. The scents will be the first in a series of diverse publications from Stella Maris Atelier to include ethnobotanical research papers, auric perfumes, chapbooks, and Vedic gemstones. Maria Blum considers product and personal empowerment as being indivisible.

Photos of the installation by Joshua White.
Courtesy of Blum & Poe.