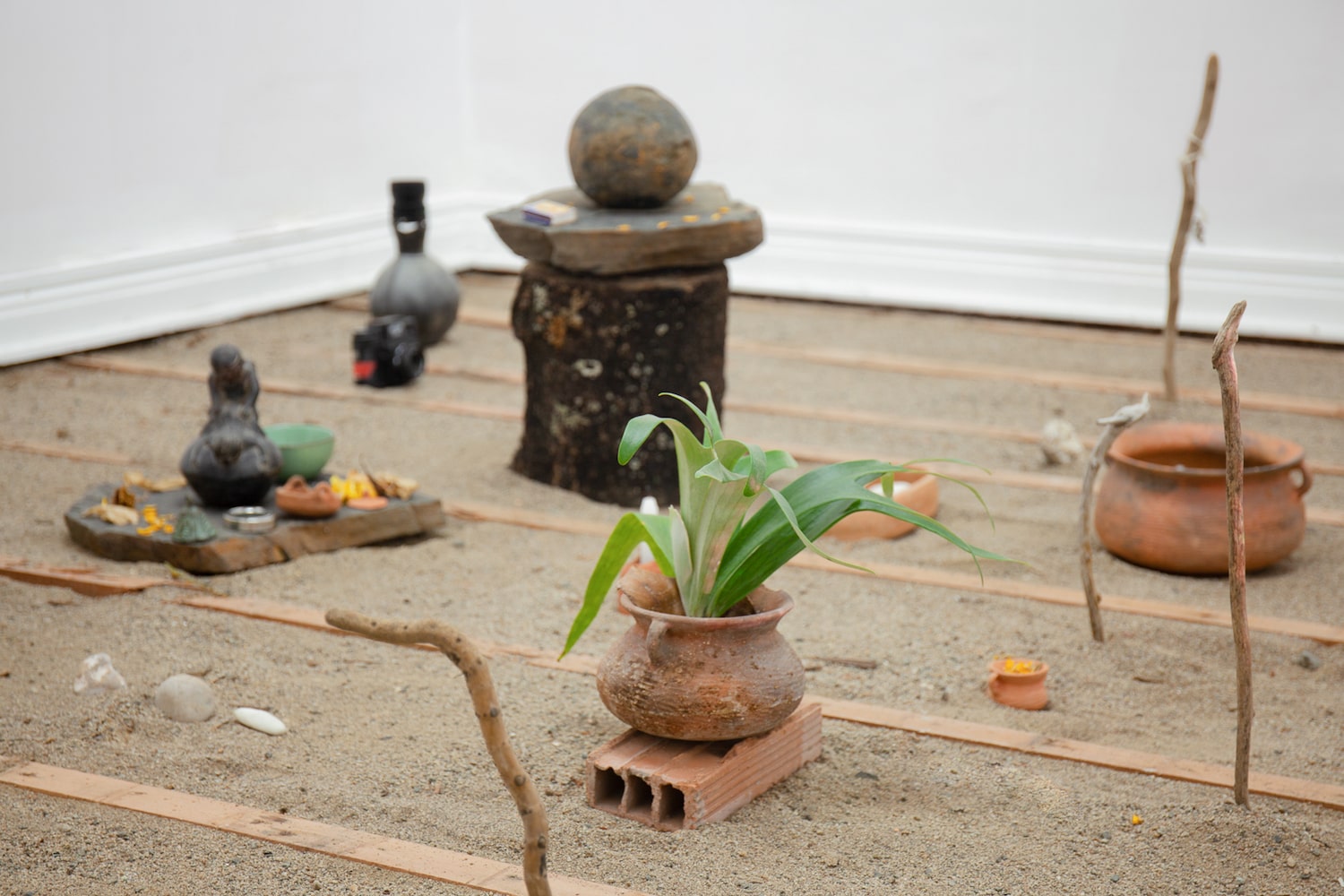 These songs are made melodies that tell a des
census

Paiján and PaijánEXPRESS present Cantos Matrios by Ingrid Pumayalla (Trujillo, Perú, 1989). A research project that traces the latencies of a personal migratory experience and that of the family, from a sound-poetic portrait that includes performance, photography and video installation. Cantos Matrios is the heart of inherited stories and borrowed voices, allowing us to be part of such an intimate and collective action of registration and emancipation. These four song-stories1 are an offering to the earthly womb. It includes detachment as a ritual of mourning, in which oral tradition, as an ancestral way of transmitting knowledge and memory, reaffirms the tensions between rural and urban; the ghost and the body. Just as weaving is an imperative component in her practice as an artist, Cantos Matrios weaves stories through voice and intonation, aware of the political agency that their declamation involves.

Ingrid Pumayalla grew up in Contumazá, Cajamarca, surrounded by nature and guardian spirits; being precisely the farm of her grandfather in the town of Parcate what makes her roots throb. At age 11, after spending a season between Cascas and Trujillo, she emigrated to Lima. A process that, for being gradual, reflects the territorial transit from the northern Andes to the coastal city. It is also at this time that her mother is elected as a member of congress for Cajamarca. Pumayalla remembers that having witnessed her mother’s political dedication and having accompanied her in proselytizing campaigns, incorporated her as a solid reference of woman-power. A voice that symbolically demands the cessation of the hegemony of male voices in the political and public geography. It is from this small biographical summary, so anecdotal that it is related to the furtive processes of her training as an artist, as a daughter and a woman, that voice, orality and its dissemination are transversal to the project.

During the early morning, Pumayalla travels from the Mansiche neighborhood in Trujillo, where her family home is located, to Paiján. Using the PaijánEXPRESS megaphone, such a recognizable and strident device of the popular economy, she aligns to a visual reference of the rally and political preaching. Through this concerting device, demagoguery is abandoned owing to the tenderness of the songs, as a liturgical-bucolic act occupied by nostalgia unfolds.  These sound recordings move away from anthropocentrism to be testimony to the oxymoron: tangibly fictitious and immaterially real.

Ingrid Pumayalla approaches her photographic practice as a medium that allows her to recognize the reciprocity between the interior and exterior of a body. In this sense, creating correspondence between two or more elements condenses the artist’s intention to bodily generate new images and mythologies. The video-installation, Nuevas Criaturas, is composed of a performance made in the forests of Parcate in melody with relocated elements that were extracted from natural and domestic environments (throughout the trip between Cajamarca region and La Libertad region). While discussing their origin and alienation, they assume the role of relics or totems that protect a ubiquitous spirit of the place.

In classical antiquity and frequent in native peoples of America, such as the Mapuches and Aymaras, the concept of Matria refers to the land of birth, roots and unwavering sentiment in contrast to the paternalism incumbent on the state as a colonial heritage. Cantos Matrios is a declaration of freedom and a bond of union from affection and femininity to the maternal warmth of the earth.

She graduated as a Photography Technician from the Centro de la Imagen Institute, 2012. She has completed an MA in Fine Arts at the Central Saint Martins school, obtaining the Daniel Ford International Prize 2015, in London.

Paiján is an artistic research platform for the development of context-specific, exhibition projects in northern Peru.