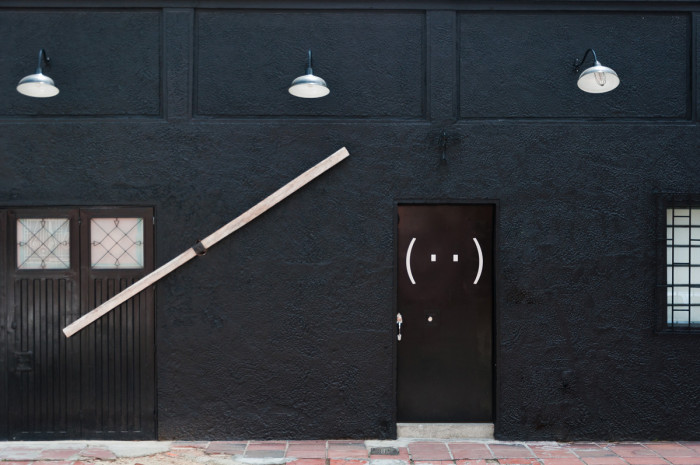 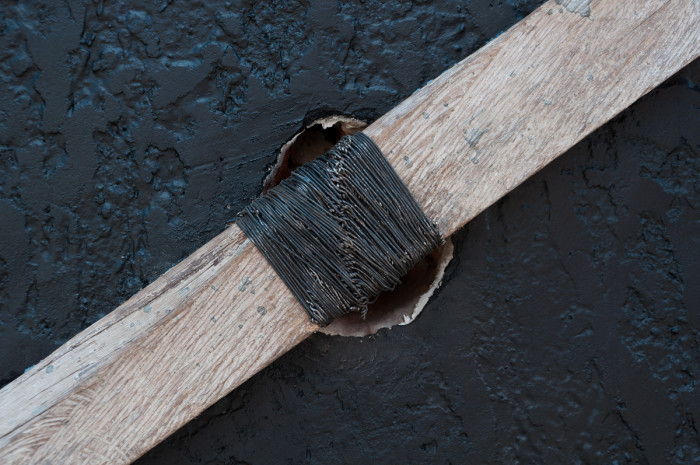 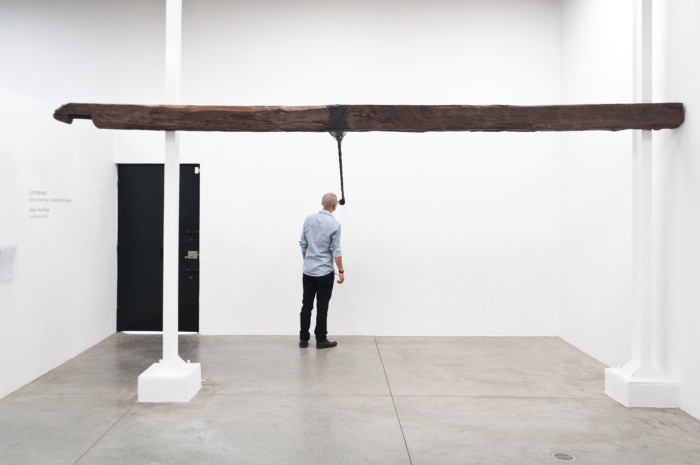 Instituto de Visión opens its 2015 programme with Contramuro, an exhibition by Marlon de Azambuja and Santiago Reyes Villaveces in which concepts of tension, compression, fragility, resistance and subversion are explored.

Contramuro confronts the viewer with tensions created between the fragility and rigidity of materials, between order and subversion, reality and fiction – offering a re-reading of the metaphorical and formal relation between structures of thoughts and the informality of sculptural and architectural materials.

Marlon de Azambuja (San Antonio da Patrulha, Brasil. 1978) presents works that, from diverse approaches, have the capacity to challen- ge notions about modernity, sculpture, urbanism and eroticism. Primavera (Spring) is an installation where order is altered by a subtle but nonetheless subversive gesture. Similar to the functioning of ideas, as a subtle alternation, agitation, or vibration in our minds, Marlon de Azambuja’s gesture of disobedience is lifting the veil to reveal make the beauty and power of chaos.

Herencia, is a living sculpture that questions in some ways the basis of art itself. A painted plant acquires the qualities of an art object, of a sculpture; however with the passing of time it strips itself of its artistic value to return to its essence.
This almost performative act, capable of displacing the artistic quality from the plant, generates a vital question: ¿ where does art remain? In the painted leaves gathered and kept in a urn next to the plant o in the artistic value contained in the act of returning to one’s own nature? This act of pure resistance is comparable to the way in which artists of a globalised world resist being catalogued by their geographic origins o historical tradition. Through micro-revolutions, these men and women refuse to comply to expectations imposed by viewers searching for “regional art” to explore ideas related to their daily life and personal experiences, without nonetheless erasing their political, social and aes- thetic postures.

From its most primitive structures, architecture has privileged a certain phallic quality. Through totems, obelisks, skyscrapers -all these, clear structures of power- a connection has been made between power and masculinity. This becomes evident in Concrete Movement, a video that shows, in an ironic way, the relation between economical power and sexist constructions. Different buildings of Av. Paulista , Brazilian economical centre of power, become the penises of a masturbatory plan.

Santiago Reyes Villaveces (Bogotá, 1986) intervenes architectural structures by achieving tensions and transgression within spaces and their fundamental elements. Beams, posts, walls and tensioned drops construct geometries that alter the structures of the buildings that contain them. Creating a space within a space, Santiago manages to produce a defiant balance through the presence of these objects sus- pended in space.

A wooden beam suspended between two columns, sustained by a braid of wire that crosses the gallery’s wall, constructs a tourniquet of extravagant dimensions that questions the existing systems of construction and the laws of physics.

In Column, a vertical wooden structure rests on the upper part of a metal cradle. The optical and physical tensions generated around the fragility and carefully measured balance of this installation rising above the spectator becomes a counterpoint to the stability of structures of power such as obelisks, towers or skyscrapers.

Repertoire (15 colour photographs) constitutes the route of a simple portable machine capable of transforming one movement into another, of changing the direction and multiplying the magnitude of the applied force. These cradles, embedded, adjusted, nailed, and nested, divide, point at, block, hold up, destabilize and press.

Traino’s photograph reveals the loads generate between perspective and tension. The installation is constructed as a projection -an opening up from the beam to the gallery or a centre that concentrates and holds the vanishing lines in a unique spot.

All these interventions make visible the informal structures that proliferate within the accepted parameters of Latin-American constructions; they reveal their capacity of constant adaptation and their insistent act of persisting throughout adversity.