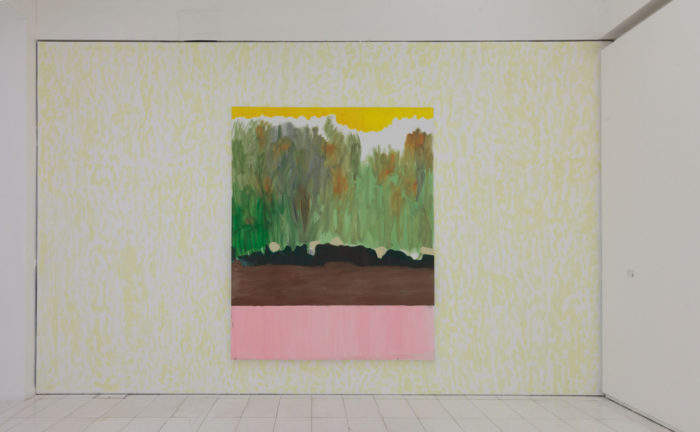 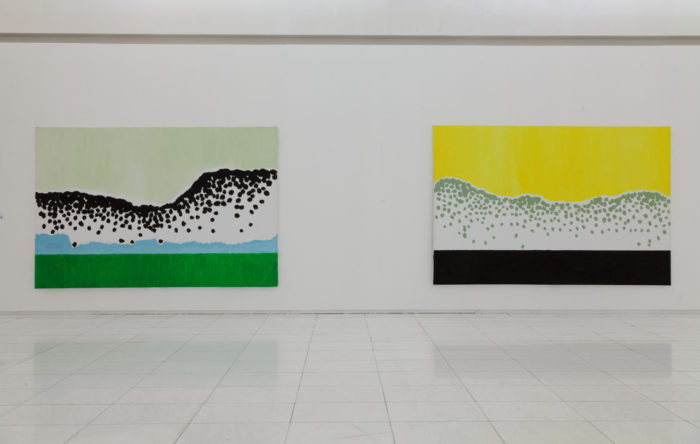 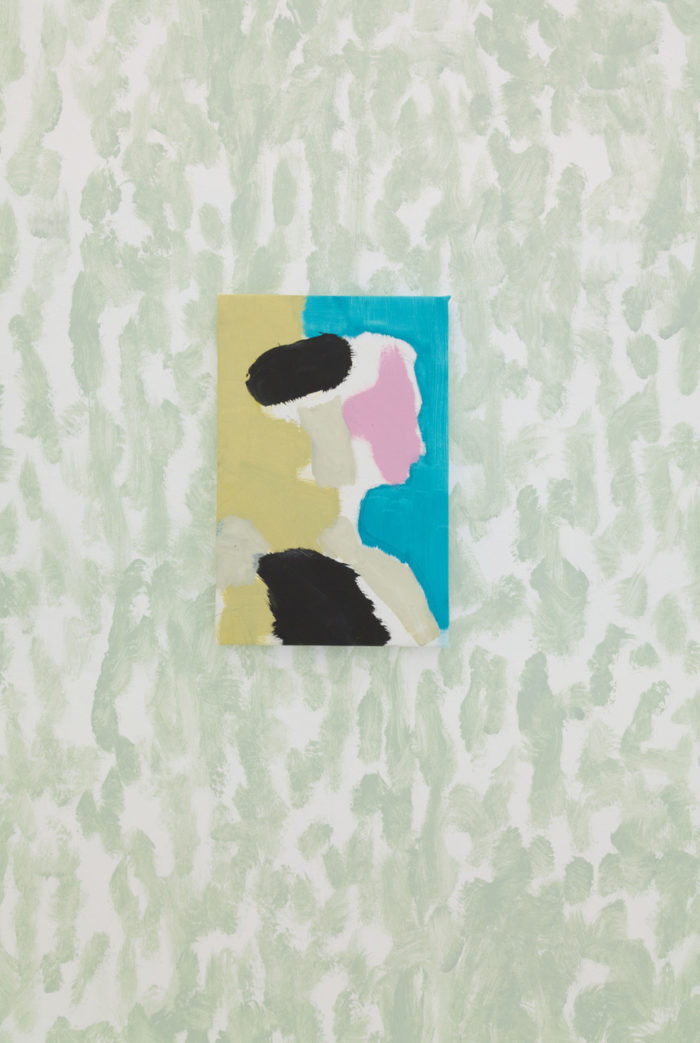 Walking towards the canvas, the approaching distance does not fully render a greater definition of the image in the painting. The haze-like quality of the artist’s brushstrokes and color palette remains blurry as one comes close, yet the marks and lines with only a slight wave of movement evince the subtlest footprint of a brush. Small and large canvases, ranging from an A4 paper size to large scales stretching beyond three meters. Bright, contrasting palette: blue, yellow, green, blobs of black and grey cutting across or below. The assertive use of oil gives the impression of flatness, of the lack of dimensions, the chance of figuration deeply lost but not quite settling into abstraction. No matter how sharp the contrast of color, the illusion of trompe l’oeil remains shattered. A subject might roam within the otherwise domineering, formless composition. Can the viewer find the slightest glimpse of herself within the fixed space? Can the subject in the painting come forth?

Morten Slettemeas’ new body of work—exhibited at the Museum of Contemporary Art in San Luis Potosí—strikes with an acute difference when compared to his earlier paintings. The Norwegian artist has shifted from an aesthetic approach that relied upon heavy narrative values: the development of action in a fixed timespan encapsulated in the canvas. Earlier paintings showcased dynamic brushstrokes leading to a sense of movement and agitation; color and form made the hierarchical order of elements distinctive: subjects claimed a first layer of import whilst backgrounds were pushed back. Subjects were embodied in actual characters born out of oil, a matter that seemed to shape reality and experience. The automatic conceptual reading became the sense of empathy towards the mundane aspects of life, where the viewer clearly caught her own overcast projection within and beyond the canvas. The gestures wrought by it belonged to the represented central characters captured in fore, inhabiting the clearly subordinated background. The viewer confronted the painting to find an easy access to narrative: as self-centered beings, living by way of subjectivity and ego, the viewer must always find herself at the fore of her activity, mundane as it could be.

But do we exist before our environment? Or are we a complex microcosm that is part of a wider, vital whole?

The use of mundane objects and subjects continues to be the main source in Slettemeas’ new body of work, but it is the process in which these elements are treated that makes for a compelling technical and conceptual step forward. Such subjects are placed and redeveloped in the constant tension produced by the painter’s new process: an assertive and equal use of color applied to both subject and background seems to blend into complete abstraction, a hinted mirror of reality in which subjects are as important and mundane as the places they inhabit—neither background nor foregrounds, but an environment that completes them because they inescapably exist within it.

Thus a clear intention is revealed: the artist’s confrontation with the visual quality of images as a blatant demand for true contemplation in order to decode the otherwise abstract figures. The artist’s process connects with a representation expressed by way of simple ideas that evade the assailment of predetermined optical, visual, or even ideological constructions within the viewer. By employing a more lucid treatment of elements, Slettemeas concentrates in still figures that are neither figurative nor abstract. The narrative value is synthetized—action is hidden amidst the singular use of color. Movements and gestures happen, yet they are shrouded from immediate perception. By grazing the foundations of still-life painting, the landscapes and subjects seem to suggest only the barest traces of motion, marginally above a freeze, slightly grasping the frequencies of movement. The paintings arrive, more and more, to a brittle state, where every element is simplified to leap towards unrecognizability, lending itself to alternate readings when integrated with other colors in the canvas. The backgrounds take a step forward, joining the subjects in a new, sole and universal ground.

It is at this specific point that the assertive use of color dilutes narrative further. By eliminating the direct representation of the subject and clinging to the crucial aspects of abstraction, the artist manages to question pictorial purity, urging an explicit responsibility in the viewer, asking for a response which completes the painting’s information, a narrative pulse from her mental activity or involuntary unconscious jolts. The employment of absence calls upon the audience: the filling of throbbing conceptual voids awaiting individual subjectivity.

It is through the awareness of his process that Slettemeas finds room to dig deeper yet, and he does so through an acknowledgement of subject and background that might not seem obvious: by reducing form and color to a minimal state, he is able to integrate them. Despite there being subjects that are somewhat defined in the paintings, the treatment employed to both crucial components is equal. The lack of hierarchical attributes becomes a conceptual stint in and of itself, hinting at an alternative perception of reality, of the inherent sameness between us and what shares our material plane—perhaps acting even as a projection of where we head as a species: the planet deserves the treatment as subject as much as we do. And, if we were to push this idea forward, we might question whether this seemingly organic merging of subject and background might hint at the understanding of an inner background, our concealed inner landscapes.

An added and final filtering trait towards Slettemeas’ end product is the overlooking of his previous experience and formation in drawing. To equally treat every element in the painting, he ignores and forgoes previous penciled outlines and relies purely on the oil, gradually eliminating the aforementioned boundaries between figuration and abstraction. The process weaves the image rather than a preconceived, rigid, former version of itself.

This technique has led Slettemeas to seek and inhabit contradictions and polarizations in his work. The spontaneous gestures led by the material generate the elusive dynamism in the paintings: if the work dwindles down the path of the figurative, the artist tugs back in the opposite direction, seeking a state of limbo—of subtle balance—between the representative and the abstract, the active and the passive, signifiers and materiality, outlining and improvisation, even negation and acceptance. As the subject blends into the background to eliminate hierarchy, figuration blends into abstraction to eliminate both itself and its nemesis.

In this way, the new collection of paintings aims at the core of mimesis: the testing acceptance of complexity, of existing beyond the limits of immediate congruence. In this regard, and perhaps not as easy to perceive for the brisk, naked eye of our time, Slettemeas’ work, as much as it remains an artifice, truly becomes the closest thing to life.