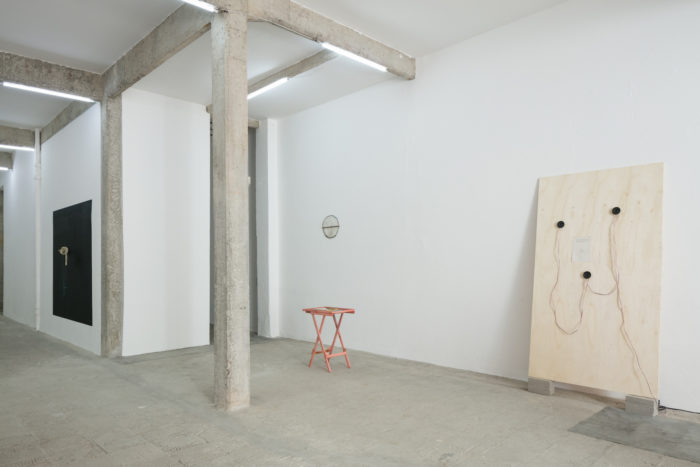 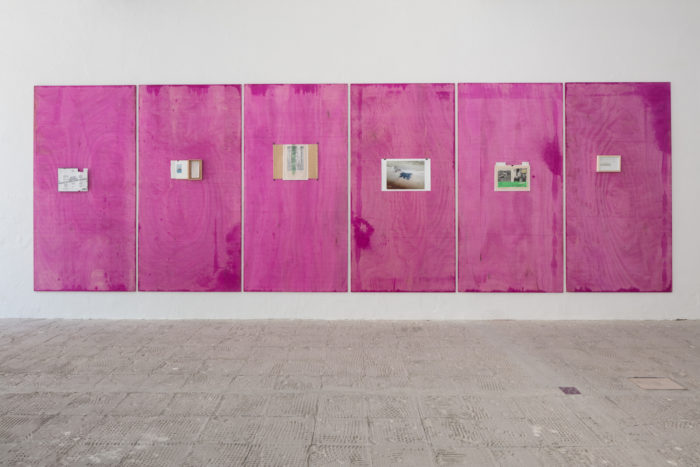 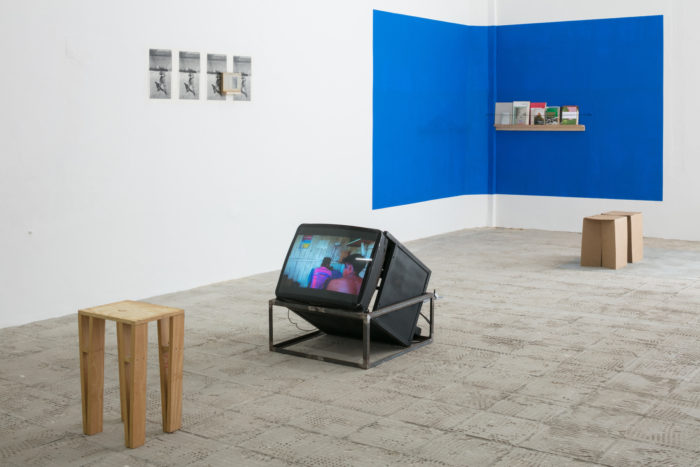 Recently opened in São Paulo, Frente de trabalho (Work Group) by Ícaro Lira (1986, Fortaleza) is the artist’s first solo show at gallery Jaqueline Martins, and a great opportunity for delving deeper into the connections that art can build with myriad social, political and cultural contexts. Amid the vibrant, festive feel of events held alongside the SP-Arte fair, this exhibit brings us the entire grammar the artist has been constructing for almost ten years now, inciting us to look at the – not entirely optimistic – interstices in Brazilian history.

Following Desterro – expedição etnográfica de fição [Desterro – ethnographic expedition of fiction] (2014), Museu do Estrangeiro [Museum of Foreign] (2015) or Residência Cambridge [Cambridge Residency] (2016) – long-term projects which enabled Ícaro Lira to consolidate an art practice that transcended the “studio-gallery-institution-collection” circuit –, Frente de trabalho takes on a more decanted or filtered down character, foregoing text and historical reviews and dealing with the visual plasticity of materials in its set-up. In Lira’s work, unlike that of any Brazilian contemporary of his generation, one can grasp how the “art object” notion gives way to precariousness or “material poverty”, not in the sense of the dematerialized propositions of 60s and 70s artists, but in direct affinity with an “aesthetic of underdevelopment” of those same years, put forth by artists like Glauber Rocha, Artur Barrio, Horacio Zabala, Luis Ospina and Carlos Mayolo, among others, to oppose the colonizing narratives of “developmentalism” (conveyed by alliances with the USA) [1]. In this sense, Frente de trabalho lends continuity to the artist’s greatest “obsessions,’ his drive to unearth futures from among the rubble of the past, to suture the fissures of language and to restore meanings that are on the verge of disappearing, amid the political “obscenity” taking place in Brazil. Additionally, it shows a sensitive arrangement of materials (mostly scraps, “trash,” objets trouvés), in a critique of art as luxury commodity.

In the words of curator Gabriel Boghossian (who wrote the exhibition text), Frente de trabalho “prompts reflection about labor and the act of working – an activity as run-of-the-mill as it is universal –, all the while taking into account issues pertaining to artistic work and the system that both feeds and exploits it”. But instead of weaving up a pamphleteering commentary on labor in Brazilian history (thereby making the proposition a mere illustration, like so many around), the exhibition consolidates the idea that history and memory are “topographies” of images, knowledge and places. The biggest risk in operations of this sort, which shed light on characters and subjects that were left out of history (the Benjaminian perspective of the “defeated”), is that of creating vain utopias, ones whose preferred vessel of denunciation is art, for its supposed ability to transform the world, which is untrue. On the contrary, this exhibit by Ícaro Lira reiterates the notion that art thinks (not the same as provokes thought), featuring a scheme at once sensitive and intelligible whereby matter and form combine – special care was taken in framing up the materials (“Objeto encontrado #1” and “Sem título, parts #1 and #2, from the ‘Frente de Trabalho’ series”).

And since this – like all of his – is a script-less project, one gets the sense that Frente de trabalho delivers bits of “debris” (like those found on a beach after a storm) and invites us to rely on them as compasses to navigate the exhibit. The occasionally casuistic, nihilistic way in which objects refuse to fixate into definitive forms is deliberate. It stems from an acute perception of the colonial obstructions that still operate in the present, and is visible in the “hide-and-show” of the velatures, the boxes, the superimpositions, the audios distorted to the point of cacophony, the stones and unexpected objects, seemingly displaced from context (like the milk box the Italian government gives immigrants and refugees).

But to me, one particular set among these “castaways” sums up the entire show. It’s a composition of postcards from dictatorship-era Brazil, advertising the “great achievements of the regime” ((the Rio-Niterói Bridge, Itaipu and the Castelo Branco Mausoleum) and “snapshots” of stone breakers, taken in the 30s as writer Mario de Andrade (1893-1945)’s “Folk Research Mission” toured the Northeast documenting folk culture. And although both of those image sets were born of an utter belief in the technology of photography, their natures are very distinct. Whereas the postcards express the incursion of technology into the domains of politics – propaganda had to be spread in order to build national cohesion –, the stone-breaker “snapshots” are testimony to the urgent need to catalog professions and cultural traditions that were on the verge of disappearing. As Mário de Andrade wrote: “[Brazilian ethnography’s] practical orientation must immediately become based on strict scientific norms. We don’t need theoreticians (…). We need young researchers to knock on doors and to collect, in a serious and complete way, what these people put away and quickly forget, rendered directionless by invasive progress”.

Dissemination and resistance, propaganda and “time capsules” walk hand in hand in our historical present and in this Frente de trabalho. In a time of over-visibility when it doesn’t seem to be up to neither artist nor art to play ethical roles of any sort, perhaps we must betray, as does Ícaro Lira, the dictatorship of labor… Lavorare Stanca [“to work is tiresome”].