Our editor, Diego del Valle Ríos, talks with Verónica Gerber Bicecci, a visual artist who writes, about the relationship between imagination, language, and writing that is presented in the book «En una orilla brumosa» recently published by Gris Tormenta as an effort to speculate on the futures of art and literature. 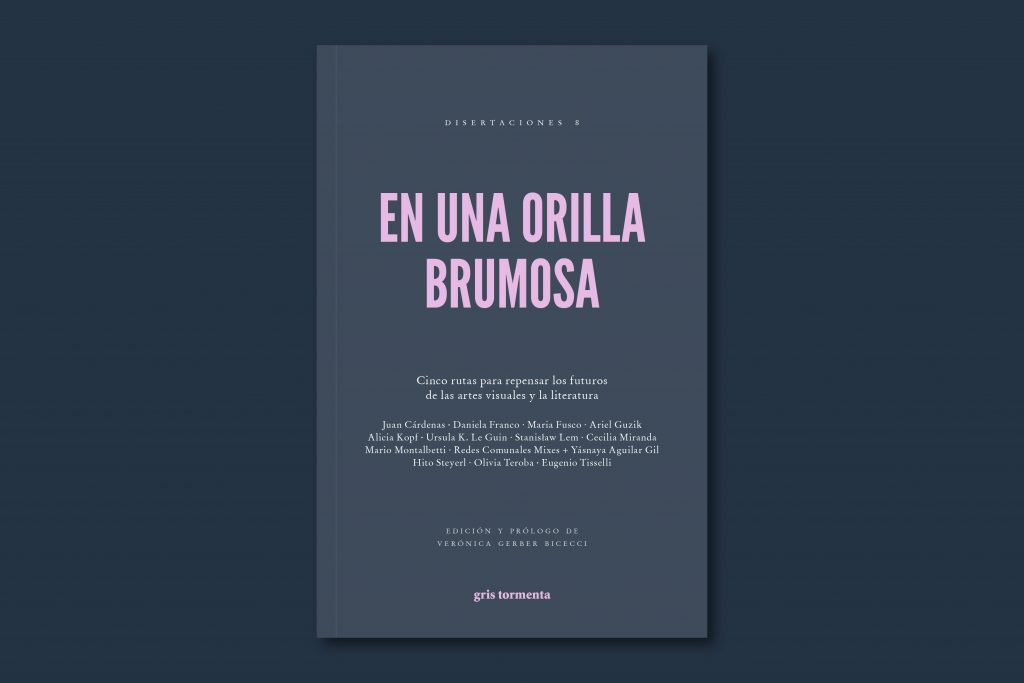 Diego del Valle Ríos (DdVR): En una orilla brumosa [On a misty edge] was recently published. A book you edit for Gris Tormenta in which you weave “fourteen voices that imagine the futures of writing and its relationship with the visual arts through the speculative essay.” It is a book that, as its title indicates, inhabits edges, limits, the in-between, the yet-to-come. Each of the texts constellated therein, subverts the codes of language in search of opening portals, that when crossing them, tickle the vital sense of existence: to express beyond what is to introduce what could be, paraphrasing the writer Walidah Imarisha. I would like to begin by asking you about the triad imagination-writings-language in relation to the idea of futures, which limits allow us to inhabit the encounter between these words?

Verónica Gerber Bicecci (VGB): I try to visualize the relationships in the triad you propose and the first thing I see is this: (see drawing 1). We know that everything leaves a trace or some form of writing: pencils and charcoal, but also living beings in movement, the landscape, the rings on tree trunks, etc. I would like to think that those writings are the source of the imaginations that shape our languages. But the reality is, for the time being, a different one, and if I think about that reality then I see this: (see drawing 2 below). Language is a system that delimits our imaginative possibilities, and writing ends up being found halfway between language and imagination. But it tries to approach, at least as far as En una orilla brumosa is concerned, the margins. In search of possible futures, in my opinion, the writings that are contained in this book wish to cross those margins. Or at least they are the testimony of that attempt.

DdVR: Why insist on dreaming the future collectively?

VGB: A few days ago, Juan Cárdenas and I presented the book at SOMA Wednesdays.[1] Juan made a comment that I think is important to repeat here. He said, “a good part of the impasse that capitalism has thrown us into […] is that people do not desire but desire to be desired.” And he added a proposal: “It’s interesting to ask oneself an elementary question when facing a work of art: does the person who made this object desire or wants to be desired? That elementary question gives many answers about present-day capitalism and the possible escape routes.” In this sense, I propose that we understand that the book insists on collectively desiring the future. That dead-end to which Juan refers was also built from individualities that wish to be desired and are unable to enter into contact with otherness. Attempting plurality is part of those escape routes or a form of resistance. 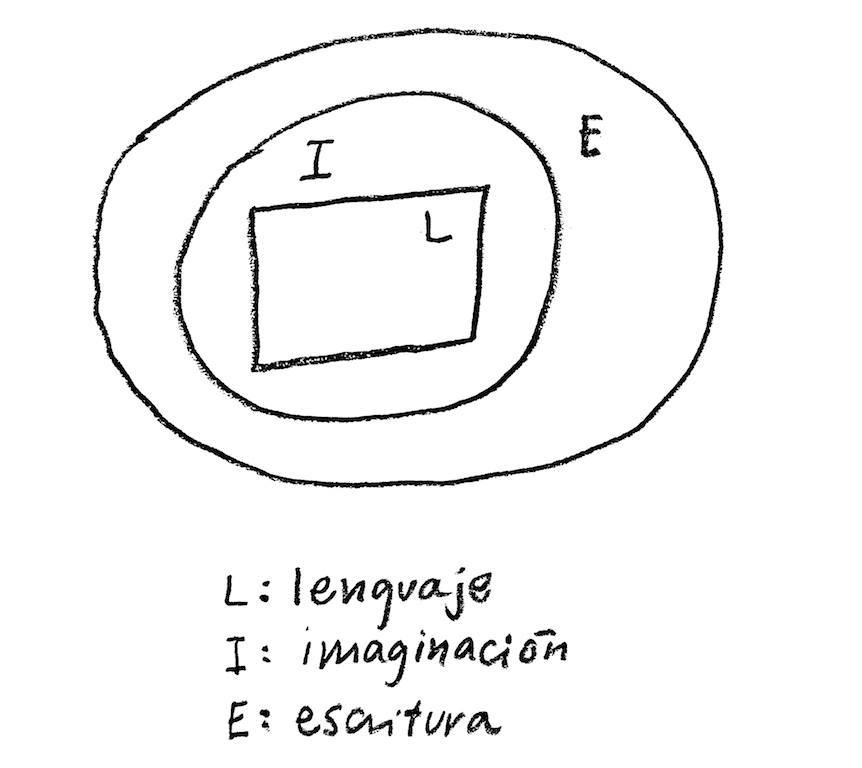 DdVR: Each assembled text incites us to defy the sensory relationship with the environment we inhabit and that inhabits us: they are proposals to sabotage the very language with which we create worlds. In coexistence, these writings remind us not to underestimate the power of contradictions. In the prologue to the book, you share that the texts were written by explorers of the calligram: “That is, artists who unfold verbal language, visual language, or both, and who assume and confront the discordances or tensions that result from that action.” Each text is, then, an inhabiting of the contradiction implicit in the calligrammatic era in which you say we find ourselves. Could you talk a little more about this era?

VGB: I started thinking about a calligrammatic era by rewriting a visual essay by René Magritte called “Words and Images” and working in my classes with what Foucault wrote about the calligram. It’s an idea that is still under construction and that for the time being allows me to weigh or analyze the image-text hybridizations that saturate our environment: advertising, media formats, memes, the structure of social networks, works of art, books, magazines, etcetera. It is also a tool I propose which is useful when thinking about critical practices with image-text hybridizations of some authors I admire, in this case, those who participate in En una orilla brumosa.

DdVR: What relationship do you find between the collective (dreaming in plurality) and contradictions in terms of the creation of worlds in this context?

VGB: Contradiction is often a mechanism that tends to be hidden in artistic manifestations. More than inhabiting contradictions, because we have always inhabited them, I think it’s about opening them up, making them visible, facing them, discussing them, or even assuming their consequences and implications.

Talking about our complex and contradictory intersections seems to me an urgent exercise in any project or practice of plurality.

DdVR: The image-text hybridizations, as well reflected in your description of the environment, point to language as a force of commoning. However, this same environment, aggravated by the social distancing due to the pandemic and the trap of algorithms, has conditioned these hybridizations to the individualistic atomization allowed by the capitalist-colonial system we inhabit: from loneliness, fear, and selfishness, everyone understands the world as it best suits them. There are important image-text hybridizations to be able to imagine different futures—such as “justice”, “love”, “feminisms”, “coloniality”, “capitalism” or “identity”—around which there seems to be no shared understanding that doubts said assumed language in order to give way to a fruitful collective grammar of imaginary relations, that is, in the words of Daniela Franco that is part of the book, “speculating on a reality that we could imagine”: strategically preparing ourselves for that which we (do not) know is coming. Therefore, dissent is avoided. It is better to stay out of trouble. What consequences and implications is this book taking care of and discussing in terms of the sensorial relationship with our surroundings? In other words, according to the fourteen texts that make up En un orilla brumosa, what do we need to take care of today in the field of language to be able to imagine ourselves collectively against the abuses of power that threaten vitality? 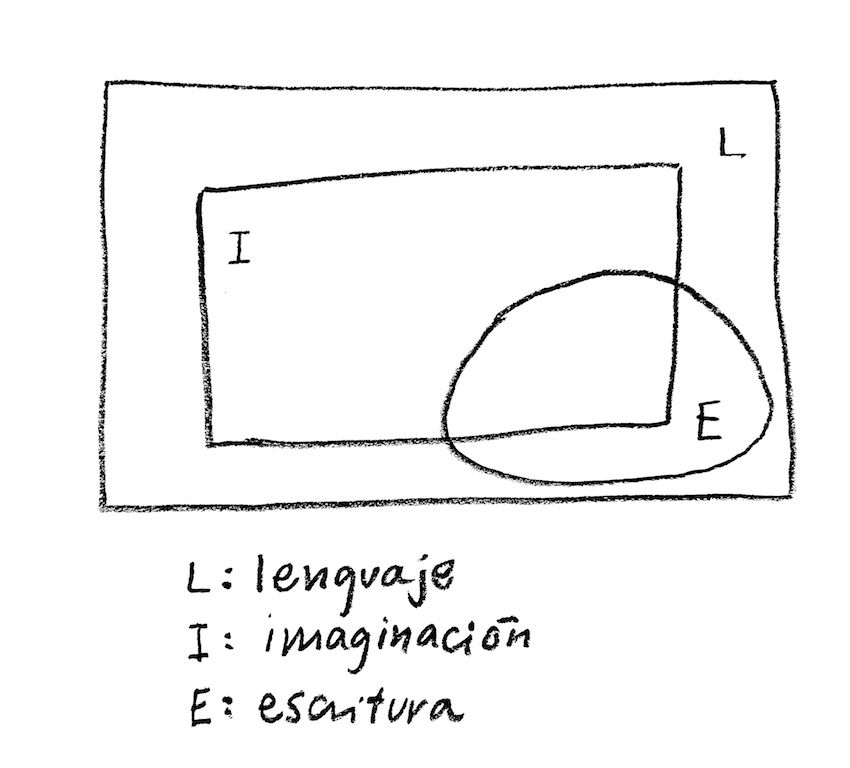 VGB: Perhaps the proposal outlined in this anthology is more on the side of “how” rather than “what”, that is, how do we take control? In that sense, I tried to make the prologue a direct result of an in-depth reading of all the texts that make up the anthology, as well as a space to record the editing process as completely as possible. What I discovered, and what I propose to readers, is to imagine a kind of compass with five cardinal points: autonomous and unintelligible writings, non-human writings, migrant writings, antonymous writings, and unearthed writings. I say it’s a kind of compass and not a compass in itself because these writings do not try to be isolated strategies or unique Norths but spaces of possible intersections to answer the question of how. The calligrammatic strategy, which I understand as a way of doubting the assumed language, could be the sixth point of intersection.

DdVR: What I really like about the book is that it is a constellation of imaginations where existences are manifested in their diversity of creative capacities: in each singular writing we can find an experience that wonders on the vitality they share with each other. The book is definitely a strategically important “how-to” for survival because it is the action of autopoiesis referred to by Suely Rolnik: “the reappropriation of the creative drive” to cure us of the vital anemia to which the colonial-capitalist system subjects us.[2] On this basis, “writing” is to imagine possible futures, recognizing the signs that produce the intersections that the world provokes in one’s own and other’s vital experiences. What power is there in disordering language from an ethical sense? What makes it possible to carry out this disorder from art and literature?

VGB: Disordering language, or going towards its margins, can be a tool to try to evacuate the fixed or conventional molds of literature and the visual arts. Non-binary language is a good example of disordering: the linguist Violeta Vázquez-Rojas Maldonado says that we can understand it as a poetic license but also, why not, as a political license. I think that is where the potency you are asking me about lies. I hope I am not erring on the side of naïve optimism but seen from this perspective,

messing up language is the possibility of seeking and proposing poetic and political licenses with which, little by little, our ways of thinking and experiencing the world could be transformed. 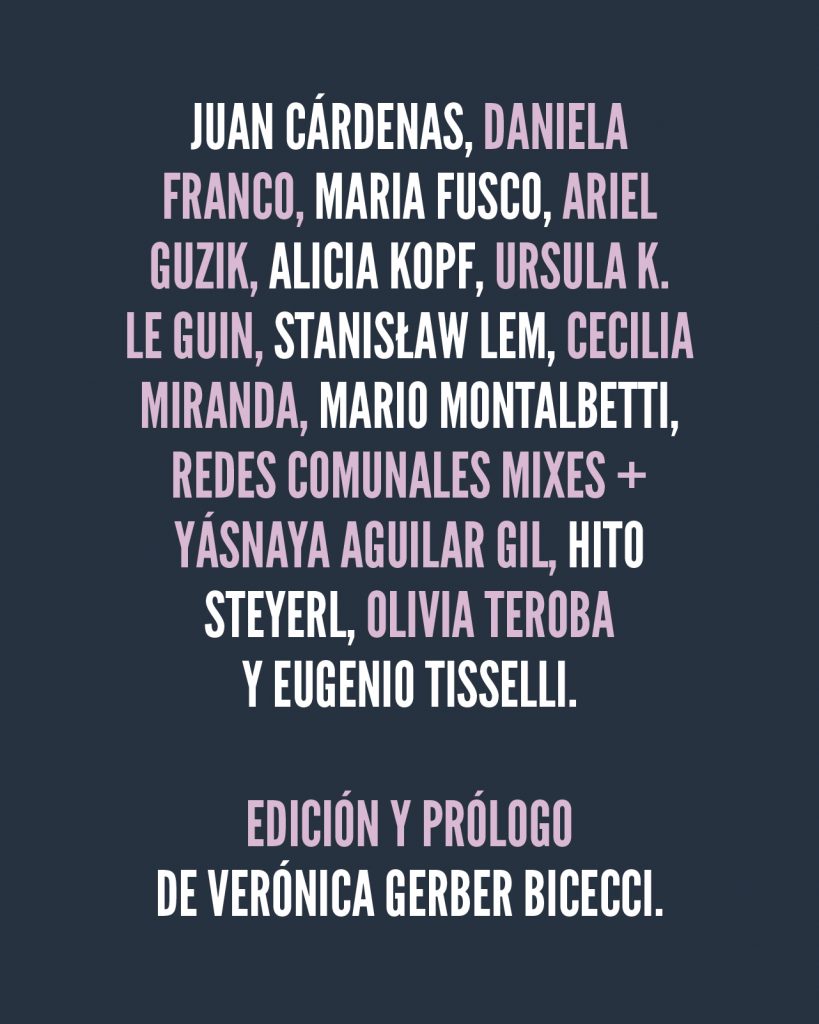 DdVR: I don’t think you are being a naive optimist. When you mention the possibility of poetic and political licenses in relation to non-binary language as a power of disruption, you are referring to a question about the autonomy of imagination that inevitably entails an ethical sense. To better understand this, the proposal made by the Ludditas Sexxxuales on ethics against the tyranny of the ego, the individual (heterocapitalist language) is useful: “An Ethics is opposed to morality. Ethics, following Spinoza and Deleuze, is the discipline of what is good for my body, that is, that which stimulates and increases my joyful passions and my potencies, that which combines me with more bodies and more affinities and joys”.[3] A proposal that leads me to this last question about your relationship with “contemporary art” and “literature”; categorical systems of imagination capture indissolubly linked to capitalism and colonialism, as the text of the Redes Comunales Mixes written in the year 2172 and that springs from the pages of En una orilla brumosa points out. What discomfort do these systems arouse in you today to motivate your proposal in this book?

VGB: I believe that anthologies are indirect spaces for collective thinking. That is why the invitation of Jacobo Zanella and Mauricio Sánchez, editors of Gris Tormenta, to deploy a space for indirect collective thinking seemed to me extremely important and a once-in-a-lifetime opportunity (which I am deeply grateful for). I proposed speculations about the possible futures of the visual arts and literature because I have the impression (though maybe I am wrong) that there is not enough essayistic speculation about the future of the artistic disciplines. And also, because I needed to think and imagine those futures with others. The how’s or cardinal points I mentioned earlier are ethical questions; strategies, hopefully, for defying and even confronting or resisting categorical systems.

To purchase the book, visit the website of Gris Tormenta.