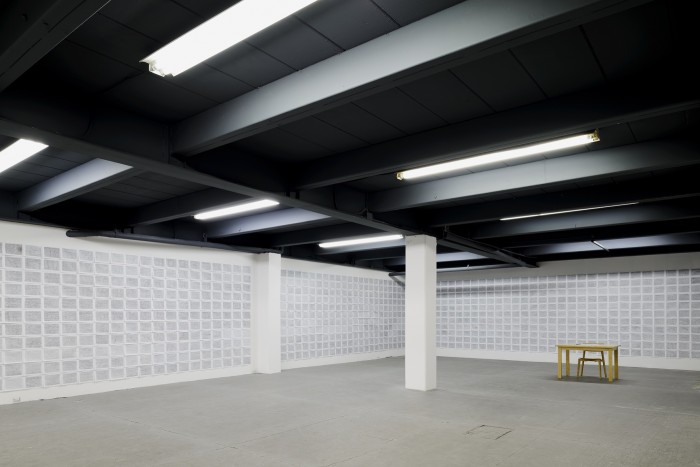 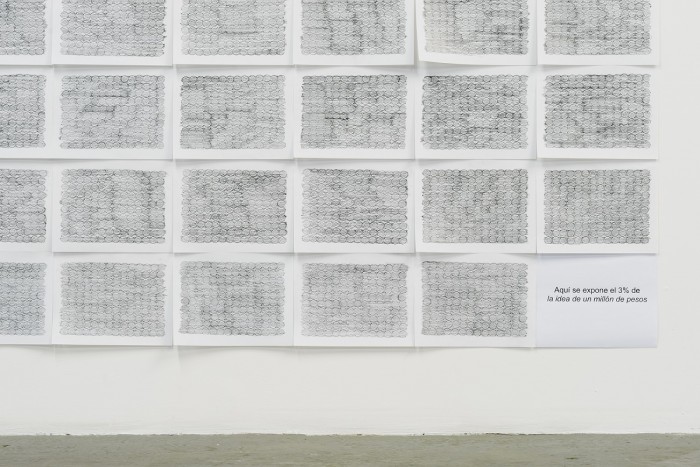 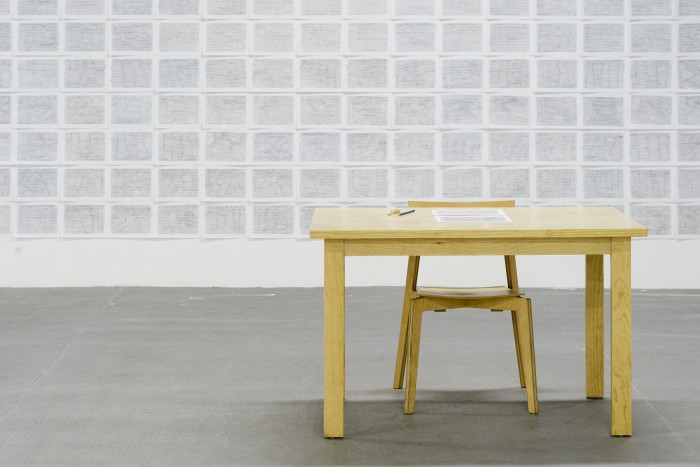 In the midst of the mælstrom of desires produced by imagination, one can make an analytic distinction between those that are achievable and others that, due to physical or moral conditions, turn into mere illusions. The exhibition El panorama, sobre todo si uno lo ve desde un puente, es prometedor [The view, especially if one looks at it from a bridge, is promising] belongs to the first category. Here, Chantal Peñalosa (Tecate, Mexico, 1987) enables the unfolding of a common desire through her work entitled La idea de un millón de pesos [The idea of a million pesos].

In a repetitive gesture that finds in frottage its means of expression, the desiring subject accumulates coins on letter size paper sheets. Each template contains fourteen pesos, while the installation in the exhibition features approximately three thousand sheets. What we see here is barely a small percentage of the process to reach the million.

At first sight, we feel confronted with an absurd scenario. The spectator finds himself surrounded by walls covered in countless sheets of paper reminiscent of posters that can be found in teenager’s rooms. Here we also stand in front of an image: the money is a drawing, a representation of a successful future that some day might come. Nevertheless, how far are these desires of adulthood from those of our younger days? Maybe the key is in the title of the piece, which indicates not the accumulation of a million pesos itself, but the idea of it. Given this panorama the absurd begins to dissolve.

The Occidental philosophic tradition has had great debates about the gap between the truth and the way it is performed. Generally there is no questioning on whether or not a desire is true, simply because of its abstract nature. Peñalosa points to the delicate threshold of this apparent immateriality. No matter how verifiable or universal, the birth of desire sprouts a force that leads us to construct a specific reality in which it can be manifested. Thus, money becomes a metaphor of desire itself, of repetition and the constant sacrifice that we perform. Looking beyond the limit of the rhetorical figure, we find everyday life: desire implies labour, one of the main concerns in Peñalosa’s artistic practice.

Desire is a force that leads to an action that in turn results in labour. How many hours will it take the artist to draw enough coins to achieve a million? Is the effort proportional to its result? What do we actually work for?

What seems to be a poetic and almost philosophical investigation of desire and its manifestation, finds a sudden interruption within a materialistic gesture. While visiting the installation and discovering all the details and differences between the countless representations of the coin, we will reach an empty, almost theatrical setting, with a wooden table and a chair. There, we will discover a pair of sheets representing 28 pesos. On a daily basis, the quantity represented on those sheets, will be modified according to the exchange rate between Mexican pesos and American dollars. La idea de un millón de pesos is modified depending on inflation and changes within the global economy. Even if the artist reaches the representation of a million, what does actually determine the value of this quantity?

Desire therefore seems not only to depend on subjectivity, but on an economic framework that shapes its apparition, as well as the possibilities of its realization. Peñalosa’s project operates on the edge of these two poles: on the one hand there is the desiring subject with its liberty, with its potentiality for thought, for representation and action, and on the other hand, it becomes evident that imagination develops itself within specific structures where history and economy act as determining forces that constantly modify that liberty.

The question behind the question, that is, history’s determination in relation to the subject’s liberty, makes us return to the title of the exhibition. El panorama, sobre todo si uno lo ve desde un puente, es prometedor is a neutral phrase. Every visitor has its own view, its own idea of promise; the show does not intend to resolve whether we are condemned to economy or whether we can actually carry out what we wish for. The presented coins are drawings, they are formal mirrors that within their representation frame a specific situation that points towards a general question: why do we desire what we desire?