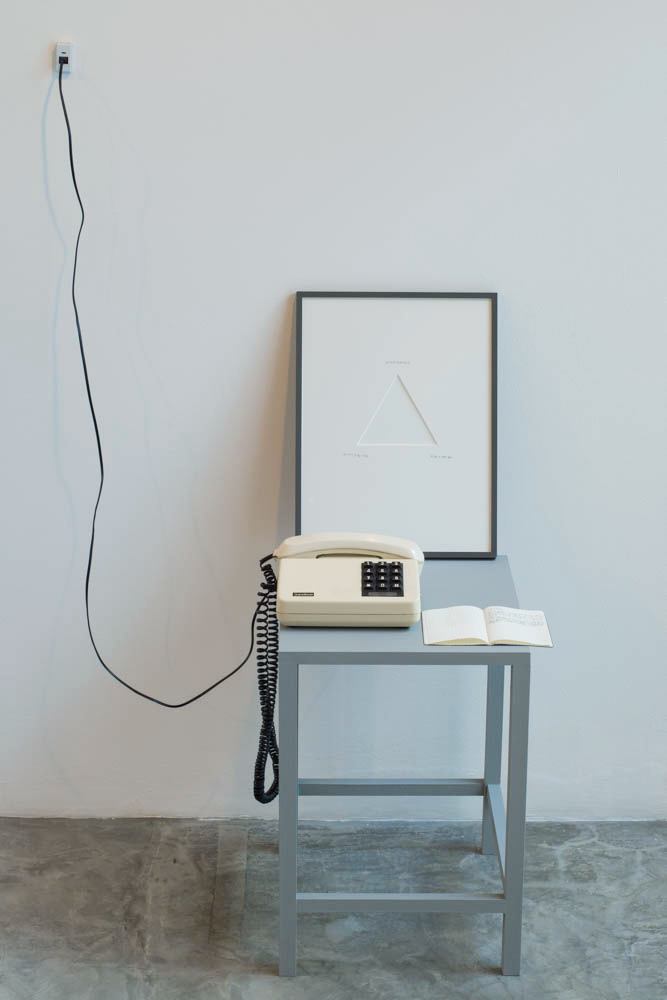 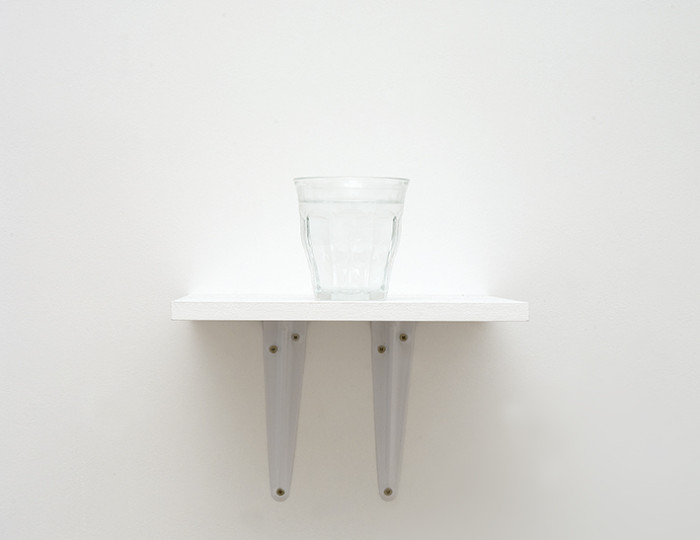 In his first solo exhibition at the Jaqueline Martins Gallery, the Lebanese artist Charbel-joseph H. Boutros presents a constellation of earlier and recent works. These genuine investigations put into practice operate fluidly between the conventional categories of sculpture, installation and performance.

By clustering mixed media pieces the immediate space is turned into an interface where distinct pieces come together to generate complementary interrelations, mirror effects and overlaps.

The exhibition further reflects the performative character of his stripped-down installations, its power to act upon the cognitive, sensorial and affective domains. They are primarily centered on the experiential, on offering the visitor the possibility to encounter immersive situations which meddle and engage with perception, memory and evocation. The longing for what is missing and the attempt to supply it are recurrent topics in his practice.

Because of the fragmentary and open-ended nature of Boutrosʼ work, viewers are encouraged to create their own narratives and mental images. By modulating the display and proximity between stark, yet highly allusive pieces, he explores analogies and oscillations between visible and invisible; as well as the interrelationships between presence and absence, tangible and volatile.

Take A Removed Stone, for instance, which recalls a period and a place by means of a stone accompanied by a short descriptive text. The stone was removed from a Lebanese forest where the artist used to wander and play in his childhood. This work refers to something that goes beyond representation: a distant landscape and a vanished episode. It exposes a lacuna and, for this reason, it offers a surplus of meanings and motivates the observerʼs intuition. However, this gap can only be filled with something whimsical, purely potential, which does not literally fit.

A fundamental point of this work is that the stone functions as a ready-made which was not taken from the consumer market. Historically the ready-made has questioned the definition of art, imposing itself between commercially branded artifacts and art. This operation granted it the definitive rank of an art object, but in the case of the stone it will only occupy this place momentarily. Therefore, the work raises a few questions. What will be the status of that stone after it is returned to its original location? Will it carry an imperceptible memory? And remain the same, but invisibly accommodating in itself a constitutive other? In other words, will it be supplemented by an extra ring, a layer of otherness, alien to its primary identity?

In this work as in others Boutros deals with an aesthetic discourse that also demands the imagination and presupposes a historical art knowledge in which it is reflexively embedded.

At the close of the exhibition the stone will be returned to where it was found. Hence, the work will miss one of its integral parts and its metonymic component. Structurally, it mirrors its incompleteness as a signifier since it simultaneously points to its future, by proposing the implications of such an absence for the ulterior ontological state of the work.

In addition, A Removed Stone functions as a metaphor for the immigrant’s condition of displacement and for constant negotiations of the alterity that stem from the changes of the original socio-geographic place and the self.

Another work included in the exhibition, Days Under Their Own Sun, consists of calendar’ pages that have been exposed to the sun in specific places with which the artist has emotional ties. The central issue of this piece is that the calendar’ sheets represent, so to speak, and contain different suns or their amounts as well as bygone days.

Like On Kwara’s Today series, Days Under Their Own Sun also involves the personal and historical consciousness of place and time. One work is hand painted with calculated precision and the other is primary the outcome of a contingent action of the electromagnetic radiation given off by individual suns of specific places. Furthermore, Days Under Their Own Sun continuously displays its evanescence as each time it is exhibited it will react to the local incidence of artificial and natural light. These sheets are fugitive relics, fleeting physical remains of expired suns and days.

The successive exposures will alter the work turning it into a kinetic register of an indiscernible swelling process. It conjures up what Henri Bergson highlighted in Matter and Memory: “Practically, we perceive only the past, the present being the invisible progress of the past gnawing into the future.”

In his actions and relations to things in general, the artist seems to be in tune and react to what Walter Benjamin conveyed in On Language as such and on the Language of Man. In this very peculiar essay he reflects on the silent, magical and material language of things. Such as the language of a mountain, of a lamp, of a stone, of a fox, etc. At a certain moment Benjamin poses the question: “And who is going to translate them?”

Due to the layered striations of Boutros’ works and the non-hierarchical coexistence of interlaced subjects, the socio-political realities are addressed in an oblique manner. In Drink Europa and in No Light In White Light, for example, he conflates conceptual gestures with autobiographical, geopolitical and lyric elements.

Drink Europa alludes to the European Union by means of a glass of water filled up with 28 equal quantities of mineral water from its member countries. The cultural and political diversities of 28 nation-states are here symbolically dissolved. As if the individual portions of water invisibly absorb one another in a “collective phagocytosis” – a term coined by Roger Caillois in his essay Mimicry and Legendary Psychasthenia. Nonetheless, the glass and its content show no visible pattern of anything other than its transparent matter, paradoxically the work hints at something that cannot be structurally articulated in clear images. By doing so, it presents a supplementary poetic space for reflection about the arbitrariness of the EU and its imaginaries of unification and boundlessness.

The video No Light In White Light features a Syriac priest in a forest in Mount Lebanon during twilight reading the genesis in Aramaic. He occupies the liminal stage between day and night. Gradually, his body, the surroundings and the bible sink into the thick darkness. This scene enhances the sensation of something spectral, of a haunting presence, the past and its ghostly semblance, which appears to subsequently disappear. All at once, the video coalesces different temporalities and crosses timescales including the archaic, the contemporary and the future. It signals the time lag between the ʻnowʼ of Aramaic language through the priest performance and the ʻthenʼ of its complex socio-cultural history. This work proposes a gaze into the past that is not just led by a nostalgic desire. Rather, it expresses the critical intention of a historical inspection.

In the past several Aramaic dialects were spoken especially in Mount Lebanon and in the north of the country. Most names of Lebanese villages and cities derive from Aramaic, including the village of Bickfaya, where Boutros’ parents live. This fact provides the evidence that the past is, as it were, indelibly engraved on the present and it too attests that memory has a geography. Moreover, No Light In White Light embodies personal, collective and politically affective visions of a particular cultural memory.

Paradox is a frequent element in Boutros’ approach. 1 CM3 Of Infinite Darkness suggests this as clearly as No Light In White Light.

On the first floor of the exhibition space the visitor finds a minute cube on a plinth in the middle of a dimly lit room. Given the substance of the work, the penumbral atmosphere produced by the low light level is incorporated into the act of viewing. The obscure illumination seems to have leaked mysteriously from the work to come to pervade the tone and mood of the room. By juxtaposing the physical and metaphorical 1 CM3 Of Infinite Darkness presents self-contradictory tensions. All at once, it lodges a gleaming and unfathomable darkness inside its minuscule space made up of mirror planes.

By evoking the insoluble it goes beyond the believable, and the representable, opening a singular space of perception. It thereby renders an enigmatic riddle which can only be dealt with by developing another way of thinking. Additionally, Boutros has mentioned that the absence of light implied in both works is also an allusion to a certain discontentment with the historical present.

In our daily lives we often use mental shortcuts that produce and reinforce distorted pictures of reality. All the above-mentioned works and several others form a galaxy of alternative shortcuts which further challenge and expose the limits of our perception and bias, allowing us to imagine and step outside their boundaries.