Gabriela Novoa’s video weaves a genealogy between knowledge, sensations, healing, the need to speak and subjectivities. This interweaving shows the power of one’s own desire that sprouts, resistant and disobedient, despite the abuses of History. 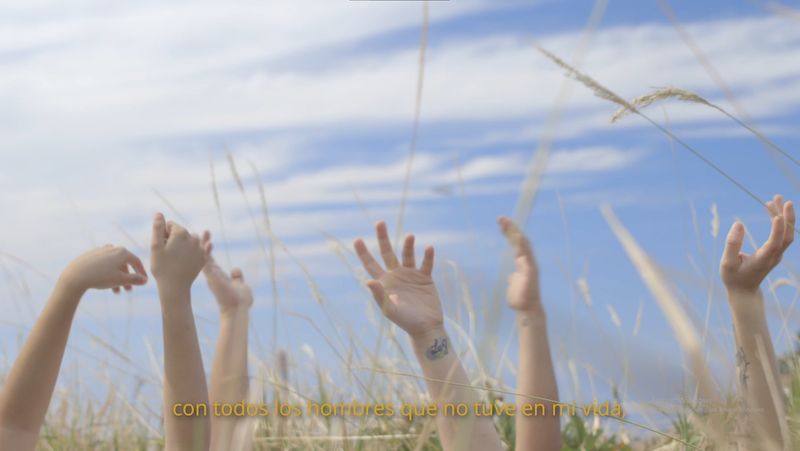 Poetry with symbolism, bodies and matter meet in celebration of a diversity of femininities, without repression, shame, or guilt; Drawing desire provokes an effect of intimacy, friendship, and strength. The video developed from a group of people self-identified as women, participants of the Laboratory of Desire, a project currently in its third iteration, collectively ran by Gabriela Novoa from the need to talk about female pleasure and to imagine and validate a plurality of ways of living sexuality. With wanderings through the earth, the seas, the grasses, the mists, between supportive silences and lively laughter, even with violence and pain, they trace their desires in complicity, with their feet walking through the textures of the sand, with their arms dancing with the power of the waves and the breeze and between bodies that caress each other with intensity and tenderness.

I came to know about Gabriela and her work from a still from the video that was circulating on social networks as a dissemination of the recent video-art exhibition, Desires and Fantasies (2021), curated by Josseline Pinto at La Galería Rebelde. The image, impactful, shows a half-naked young woman, reclining on an armchair. By holding a rifle, she redefines the reclining; in a position of alert, she insinuates death to the heteronormative and patriarchal system of desire.

The image described is preceded by a rapid sequence of classical paintings of female nudes made by men. Anticipating the gaze that undresses to provoke the desire of the man-subject and the historical gaze that singles out and applauds these paintings as aesthetic mastery, Gabriela prevents the audience from staring at each painting. The sequence of the whole creates a complicity between women with names and desires of their own. Victorine Meurent is one among many more yet to be named, objectified and marginalized by art history as muses.

Through the sequence, they detach themselves from the reclined pose, and the idealized forms of their bodies are transformed into movement, confabulating a dance of disobedience that accumulates momentum towards the awakening of a young woman. The woman bends down to take a rifle, caresses it and sits in position with it, but she senses that the weapon is not her strength; her energy comes from the feeling of a desire of her own. The woman departs from the place of object and there she leaves the other and foreign desire.

Speed highlights a link between the women in the foreground; in Drawing Desire, they do not disobey alone, but in a sisterhood that is woven through time and space. However, these women are not the only ones in the paintings. The gaze of the male artists created a social, hierarchical, and taxonomic order, by means of planes and contrasts, thus, for example, they painted black women servants as bodies camouflaged with the background. How to explore female desire, also questioning the racist colonial gaze present in these paintings?

From minute two, after the paintings are introduced as moving images, the video is worked as a series of paintings. Semi-still images give rise to a rhythm without hurry with which desires of one’s own blossom creatively and experimentally. Between planes of tactile moments and individual and collective sensuality, desires are intertwined with experiences of abuse. After minute five, a second sequence of classical paintings appears, this time depictions with greater rawness. Here, the act of sequencing is reiterated, pointing out the normalization of this violence within the history of art. The speed of the images returns, but the voiceovers resist the alacrity.

A third and final sequence shows the diversity of the gazes of portrayed women, some by female artists. The gazes on the canvases meet a filmed woman who closes her eyes in safer sensuality. The video, influenced by the language of painting, composes a genealogy and weaving –as Gabriela has mentioned– between knowledge, sensations, healings, needs to speak and subjectivities. This interweaving shows the power of a desire one’s own that still flourishes, resistant and disobedient, from the abuse of History.