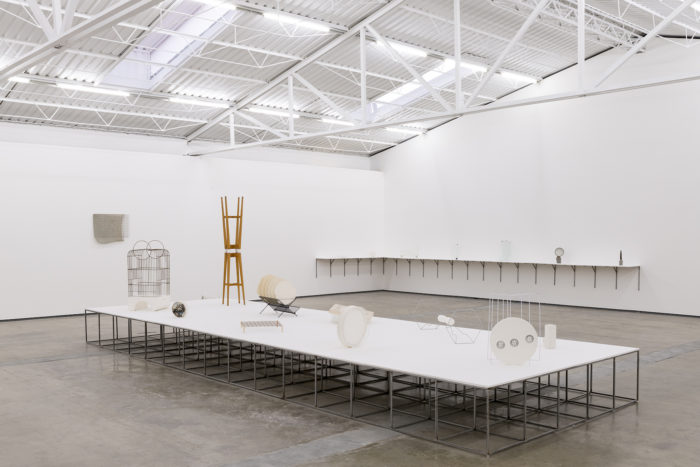 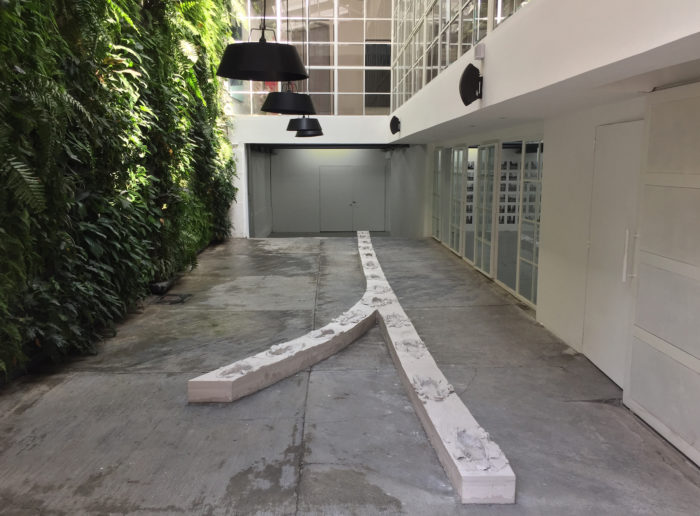 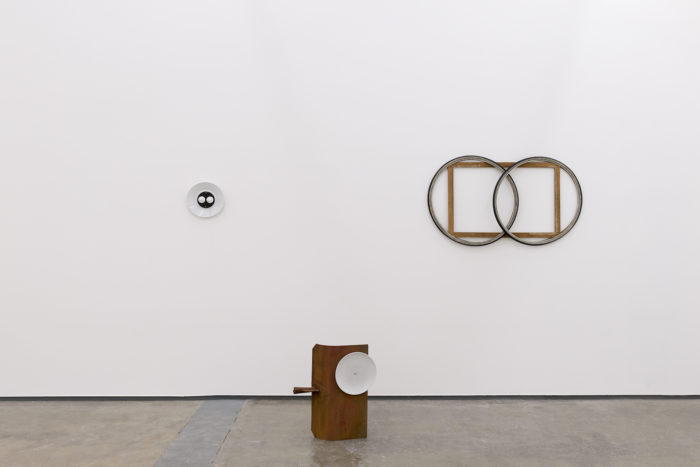 De Métrico a Imperial is an intensive dialogue between Ištvan Išt Huzjan’s poetic experiments and the exhibition space. Continuously flirting with avant-gardes and neo-avant-gardes, Huzjan’s work always reflects his ability to create multi-layered structures in terms of both content and form. In this respect, Huzjan’s work is not a revival of Dada’s attack on the nature of exhibition as a medium of expression but rather refers to the approaches and presentations of practices that have impacted exhibition methods and means by which art is received by an audience.

It is no coincidence that the exhibition begins in the gallery’s foyer patio with Huzjan’s ongoing project Subterranean Walks as this piece represents a symbolic culmination of artist’s experience related to his journeys. This work, an object with the artist’s footprints, can be understood as a collage of his past projects as it references separations, which directly link to the symbolic measurement of ‘emptiness’ created during the artist’s travels.

The intertwinement of architectural space and artworks continues in the lower gallery with Daily Chores on 5th Avenue, a performance he carried out in New York City in 2017 a few days after Donald Trump’s inauguration. In the performance, Huzjan walked the entire length of Fifth Avenue from north to south, cleaning the gutter using a small broom and a dustpan. Stretching over Manhattan from the Harlem River in the north to Washington Square Park in the south, Fifth Avenue led him from the poorer parts of the city to areas that become globally infamous for financial, political and media power.

The hallway leading to the gallery’s main exhibition space can be read as what anthropologist Marc Augé would describe as a nonplace, a transitional area that lacks the identity to be recognized and where people remain anonymous. Huzjan here has filled it with projects linked to movement. These projects are not static rather they slide between the public and the private, between geopolitical places, cultures, histories, people and their relationships. Suddenly the gallery’s nonplace is brimming with untold stories, a reminder of those that are always among us if only we wish to notice them.

Through the nonplace, the viewer finds the main gallery, where intimate objects made in the shelter of the artist’s studio are showcased. These so-called conceptual objects combine found materials (objects from Huzjan’s everyday life) with generic construction materials displayed on pedestals of 45 cm, 90 cm and 157.5 cm in height, respectively. The objects seem to create a poetic narrative that echoes the artist’s toying with different formats, materials, and functions. While it may seem that the artist is caught in a loop of self-sufficiency of form and mannerism, this is not the case. The objects hover between public and private spheres, between their (former) function and their translation by Huzjan to an exhibition context. The history of sculpture has always been the history of the relationship between the material and immaterial. In Huzjan’s case, this relationship has emerged as an exploration between the object and space, which is why the placement of his works at different heights, symbolizing human growth is essential.

Ištvan Išt Huzjan is an artist whose works create tension between opposing poles: avant-garde and neo-avant-garde, public and private, material and immaterial. The artist’s personal narrative facilitates his examination of different media, while also revealing Huzjan’s need to be on the move and explore the media’s boundaries. Therefore, the viewer is sometimes left with an impression that Huzjan is a wordsmith whose verse may at first seem finite but really offers a proliferation of infinite meanings and forms: poems that somehow exist at the end of words.