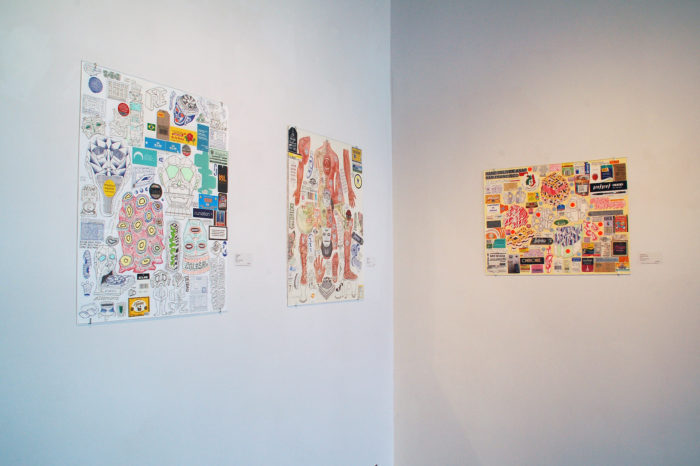 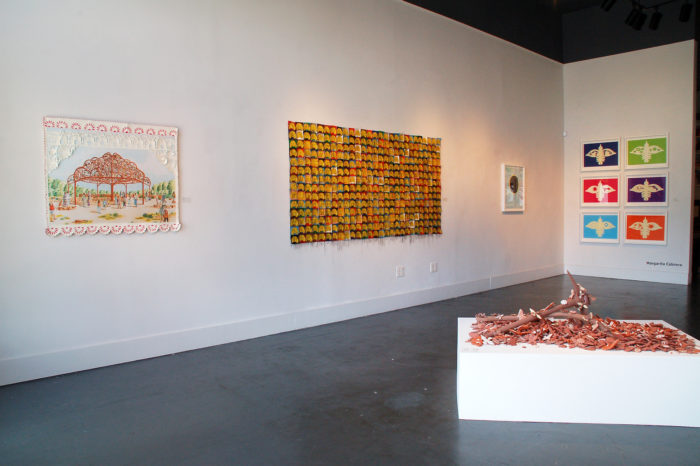 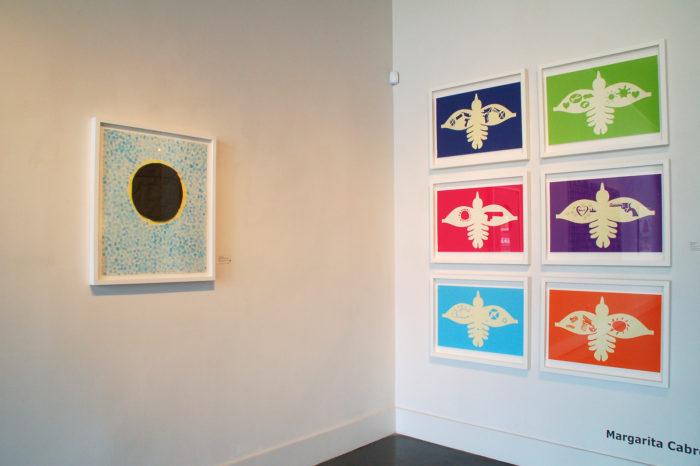 Both alumni of Artpace’s International Artist in Residence program, Jiménez in 1995 and Cabrera in 2008, their works are conceptually based in Mexican cultural objects and traditions and strongly connect with concepts of the collective/community. Director of Ruiz-Healy Art, Patricia Ruiz-Healy states, “I selected the work of Margarita and Cisco because of the dialogue they share with the hand-made and the conceptual way they converse issues of violence, migration, and memory.”

Margarita Cabrera: Collaborative Work presents sculpture, textile, watercolor, and prints that highlight the artist’s work produced collectively. Currently, Cabrera is working on a public art piece, commissioned by the San Antonio River Foundation, Árbol de la vida: voces de la Tierra near Mission Espada in San Antonio, Texas, which incorporates up to 700 participants. The massive public artwork is scheduled to be unveiled in October 2018, but Ruiz-Healy Art has correlating artworks from the project on display, along with some of the artist’s other community-centered projects. Margarita Cabrera received an MFA from Hunter College in New York, NY. Cabrera is an assistant professor at the Arizona State University Herberger Institute for Design and the Arts. Her most recent exhibitions include a show entitled The Lotus in Spite of the Swamp, at the New Orleans “Prospect 4” and The U.S.-Mexico Border: Place, Imagination, and Possibility” at The Craft & Folk Art Museum.

Cabrera’s work has been included in the Los Angeles County Museum of Art, the Smithsonian Museum of American Art, the Museum of Fine Arts Houston, the Contemporary Arts Museum Houston; the McNay Museum San Antonio; the Sweeney Art Center for Contemporary Art at the University of California, and El Museo del Barrio, NYC. In 2012, she was a recipient of the Knight Artist in Residence at the McColl Center for Visual Art in Charlotte, NC. Cabrera was also a recipient of the Joan Mitchell Foundation Grant.

In Sounds from the Archeological Time Machine, Cisco Jiménez presents a new body of mixed-media works that are filled with drawings referencing ancient Mesoamerican artifacts and items of urban culture such as boom boxes and record players. Jiménez synthesizes these cultural references with the use of everyday detritus and in doing so he creates a pseudo-archaeological account of the products, food, and materials we consume daily. In essence, Jiménez makes a time capsule that breaks the boundaries of any specific time period to include the indefinite continued progress (and halt) of existence.

Cisco Jiménez was born in Cuernavaca, Mexico in 1969. Academically trained in fine art from the Instituto Regional de Bellas Artes in Cuernavaca and in Industrial Design at Universidad Autónoma Metropolitana in Mexico City, Jiménez also studied under the tutelage of Bruce Dorfman and Jose Manuel Springer. He has exhibited widely at The Modern Art Museum of Mexico City; the Contemporary Art Museum of Oaxaca, Mexico; and the Museum of Contemporary Art of Guayaquil, Ecuador. His work can be found in the permanent collections of the Jumex Collection of Mexico City; Museum of Latin American Art, Long Beach, CA; McNay Art Museum, San Antonio, TX; USC Fischer Museum of Art, Los Angeles, CA; and the British Museum, London, U.K.

Cisco Jiménez: Sounds from the Archeological Time Machine and Margarita Cabrera: Collaborative Work will be on view through June 30, 2018.