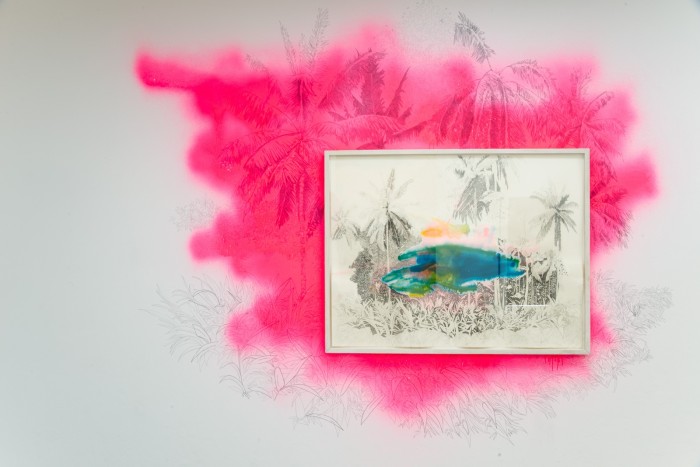 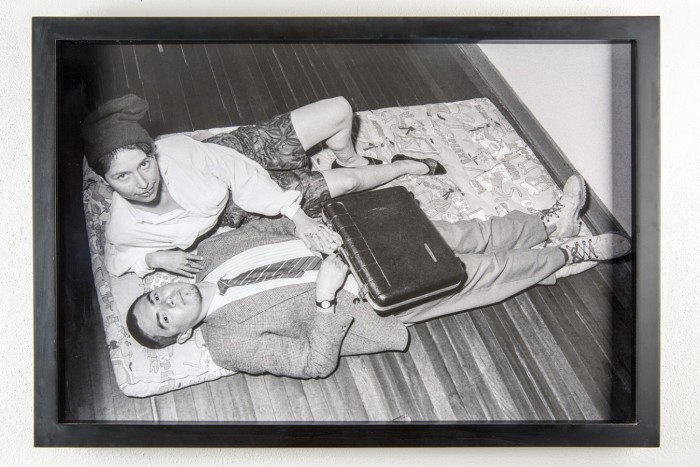 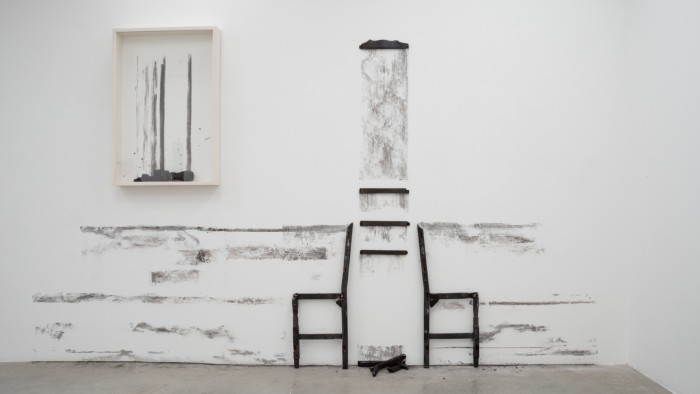 Zero Normal is a curatorial project by Magdalena Arellano that links the common aspects that characterise Latin-American artists working with the themes of territory, landscape and representation.

In this sense, the artworks are presented in different categories, -the categories are not mutually exclusive and there are practices that roam between several of them-:

Public and private actions with the group Los Dudosos (Silvia Ibarra and Wilson Díaz) and Wilson Díaz who subtly question roles, gender, sexuality and social status and analyse the territory of improvisation as a fictitious space that re-questions, through intervention and appropriation, the act of inhabiting spaces, individually and/or socially.

Sara Milkes’ Jardínes Zen contemporáneos (Contemporary Zen gardens) (2015) are amorphous, colourful and improvised creations expressing the visual complexities of our daily life. Oscillating between public and the private spheres, they combine visual elements belonging to urban sectors, such as graffiti or publicity with elements of our daily lives such as wastes or invasive plants.

From appropriation and superposition of cumbia music videos, images of violent acts or catastrophic events of the recent national history of Salvador, Nadie reveals how sceneries for laughter and disaster are sometimes the same: the Sheraton Hotel, the Monumento al Divino Salvador del Mundo (Monument to the Divine Savour of the World) and El Salvador University.

Through his piece, Escala de valores (Scale of Values) (2015) Karlo Andrei Ibarra establishes relationships between social and economical classifications and the Pantone chromatic identification system used by diverse creative sectors since the 60s.

By the conceptual action of putting garbage bags in front of the gallery, Adriana Martínez, questions the concept of beauty, ephemeralness, sublime and truth. She pushes the boundaries of the concept of representation beyond aesthetic images or categories.

For example, in Estériles estéticos: Estructuras triangulares and Corona fúnebre para mí misma (Sterile aesthetics: triangular structures and Funerary crown for myself), Sara Milkes uses directly and symbolically different visual categories to try to constitute works that question the relevance of aesthetic definition in the artistic object. Milkes integrates visual elements belonging to comic, graffiti, kitsch or even cooking to art traditional languages to create a expression that does not project any judgement of value.

In Sobre la superficie (Over the surface) (1994), Wilson Díaz uses improvisation as a method of composition. His nude photographs present an exploration of the body whose aesthetic value lies on the privacy that they allow to reveal.

In her paintings, Paola Vega randomly creates colour stains to obtain abstract, utopic and pleasant landscapes. Through the constant repetition of oil layers, she drifts into spontaneous and unconscious states of expression and creates atmospheric compositions that incite contemplation.

Víctor Garcés series of drawings are made from discarded furniture or architectonic ruins, found in the San Felipe neighbourhood of Bogota, that are later, in an introspective and violent act, seared to be converted into charcoal. Tarde y temprano. Mediación #6, Recuerdo con nombre or Polvo y Gas, (Later and Sooner. Meditation no.6, Memories with name or Powder and Gas) extends itself onto the exhibition space creating a composition of materials, objects and bodies combined with the intention of establishing a dialogue between presence, architecture and history.

“Improvised landscape” is the theme of investigation through which the artworks of Sebastián Fierro, Adriana Ciudad and Antonio Castles are presented. All three investigate the way in which contemporary landscape became the result of multiple crossroads between invention and practice and obeys to the constant urge to project a notion of internal order.

In Esquina (Corner) (2014) Sebastián Fierro proposes a revision of the conjunction between the natural world and architecture. The curved corner, reminiscent of natural forms was made popular by art deco style, while the floor tiles with the Necker cube creates an optical illusion; behind the walls, blurring the separation between inside and outside, Sebastian places other elements: trees, big stains of synthetic colours to create an optical illusion of space.

With her installation Matorrales (Shrubberies)(2015), Adriana Ciudad reveals the contradictions hidden behind landscapes. Her utopian representations of the Amazone – pure, wild and primitive, are covered by colour stains to recall the violence and the wars in which that territory has participated as witness and actor.
The stains can also be read as a metaphor for the hidden truths lying sometimes under different layers.

Antonio Castles’ piece A lo largo y ancho (2015) is an in situ installation that confronts rural and urban landscapes. The rural landscape could be understood from two different perspectives: as an idyllic place, a rural paradise free from the cities’ vices, the utopia of a perfect space where a reconciliation between man and nature can happen, or the territory of underdevelopment and oblivion. Between those two poles, Castles pieces reflect, through photographs and videos, on the development undergone by the landscape surrounding Bogota, revealing its history and its economical and social transformation.