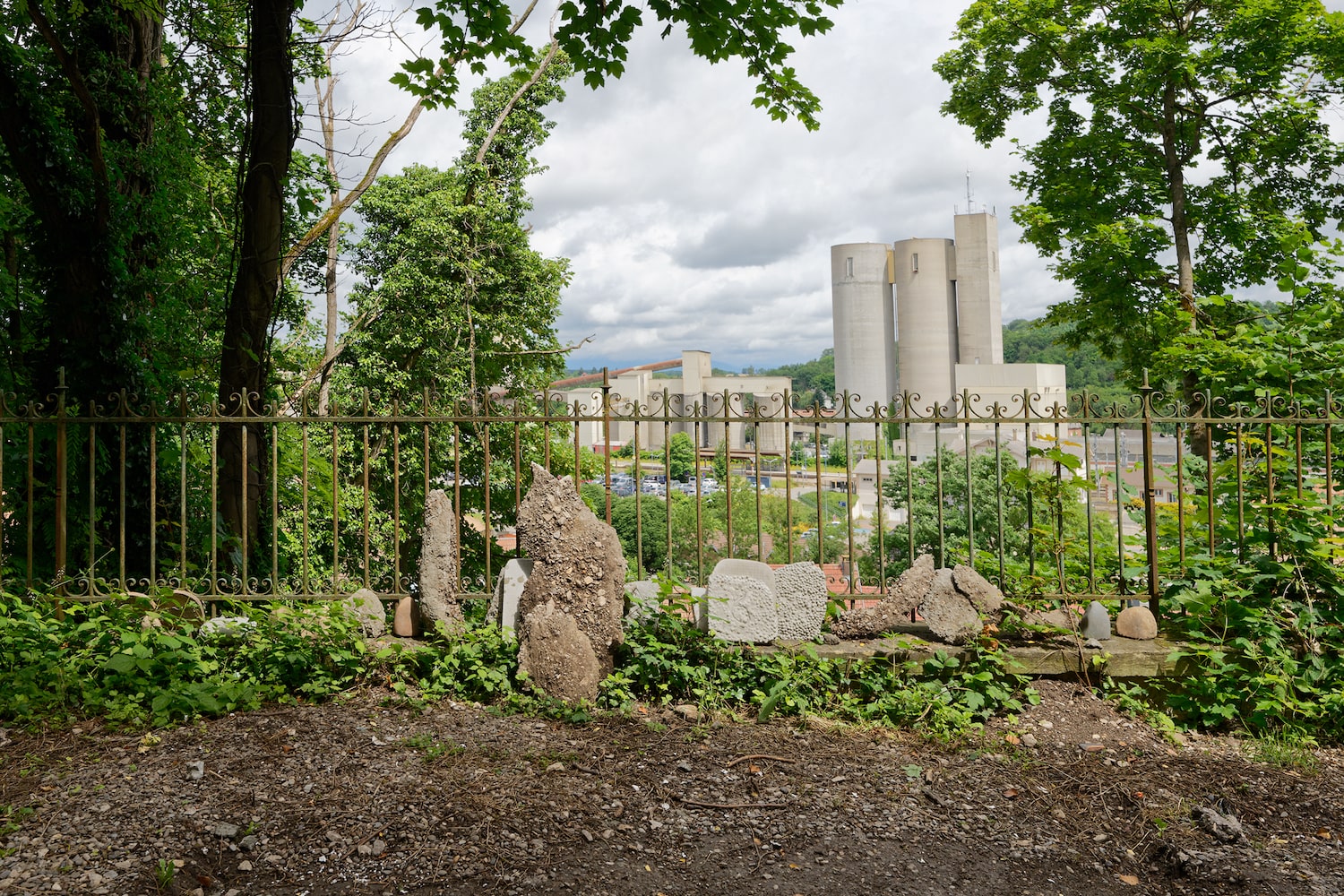 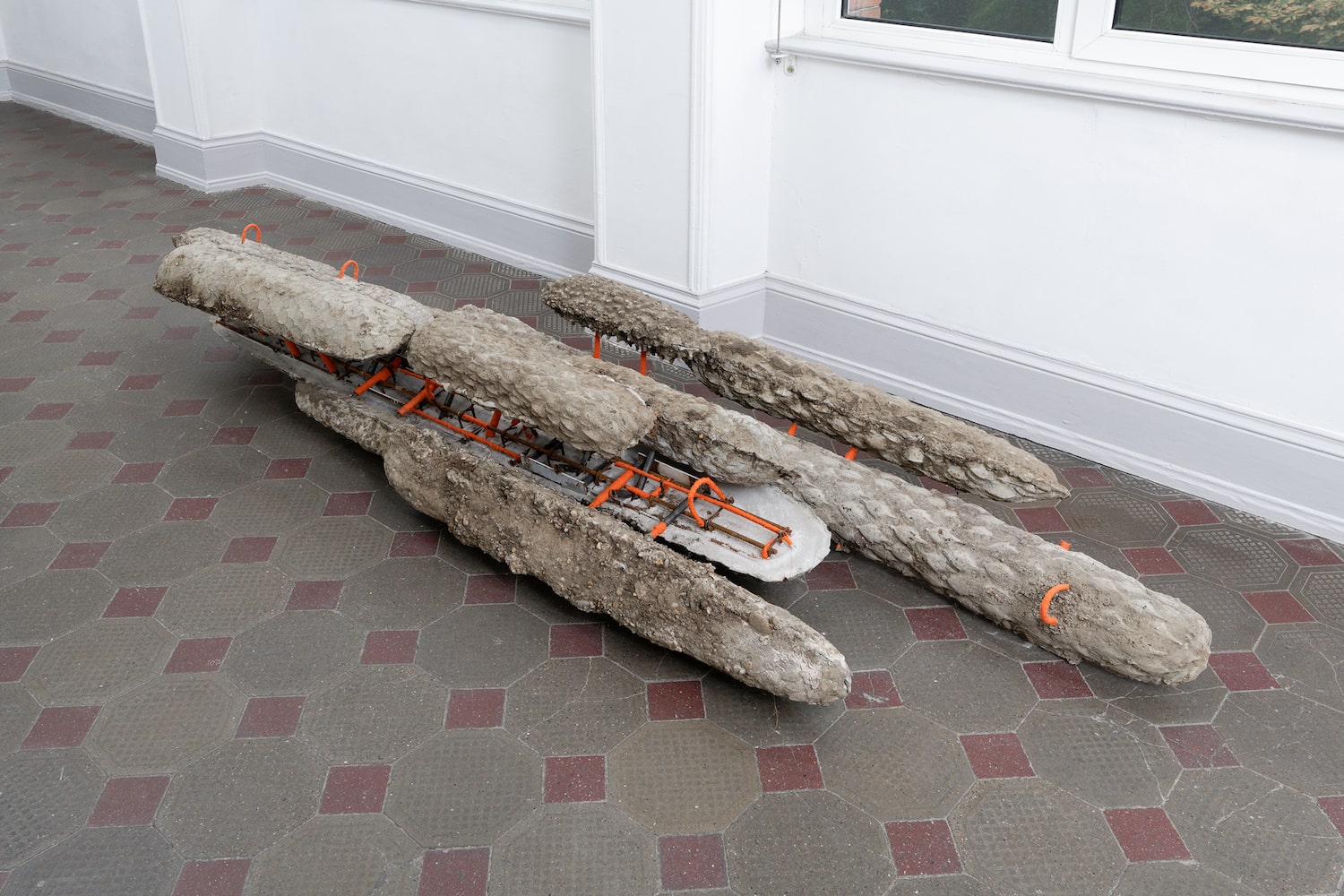 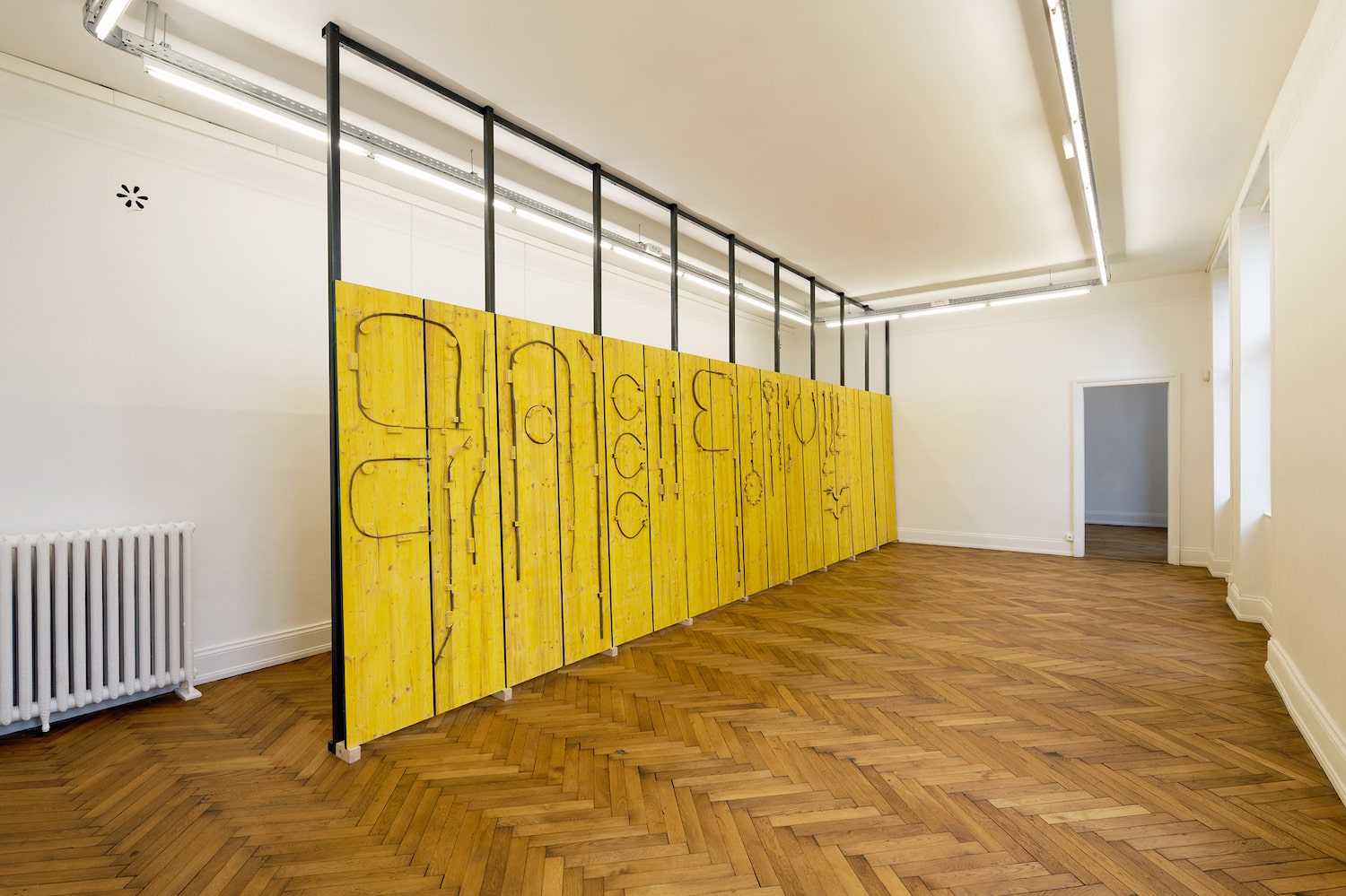 Black jacket, gray sweatshirt is an exhibition generated by interlacing narratives and vernacular practices that Jorge Satorre both experiments with and literally unearths in Altkirch. The exhibition’s matrix is comprised of a series of 22 drawings created by the artist according to observations that he wrote in Mexico City’s Bosque de Chapultepec, a site of frequent romantic encounters, one day in October 2019. Jorge Satorre created these drawings over the course of four months by only referring to his notes. The resulting 22 drawings cover 7.5 hours of that day and each correspond to 20 minutes. A couple appeared around 1:45 pm and left as it started to rain.

This series is inspired in part by the play El Acero de Madrid (The Steel of Madrid), written by Lope de Vega in 1608. The comedy recounts a specific practice—initially in vogue among Spanish high-society women in the 17th century but later becoming more widely popular—which consisted of ingesting small bits of clay pots called búcaros for the supposedly beautifying, skin-brightening, slimming, and possibly contraceptive qualities of their decorated surface. These búcaros originated from Badajoz and Cáceres in Spain as well as Estremoz in Portugal. The most prized, however, were those that hailed from the province of Santiago de Tonalá, located in today’s state of Jalisco in Mexico. To counter the harmful effects of clay eating, it was recommended to “drink and stroll the steel” (tomar y pasear el acero), i.e., to go to the woods or the countryside looking to drink ferruginous spring water. Spanish Golden Age society quickly eroticized this practice, assigning a sexual connotation to the expression by insinuating that these curative walks led to furtive love affairs.

Jorge Satorre ties this history to another practice recounted by Iván Gallegos, a blacksmith with whom he worked in Cuenca, Ecuador: when a tool is worn out, its damaged edge is cut off in order to sharpen it. The residues thus obtained are gathered, made red hot, then cooled down in a glass of water, infusing the history and strength of the work accumulated by the metal. The resulting infusion can be used as a remedy for all kinds of deficiency and loss.

Eating the decorated surface of functional objects produced on colonized land to brighten one’s skin—a symptom of classism and racism—or to prevent pregnancy; drinking the energy accumulated by laboring bodies in blacksmith workshops; partaking in non-reproductive sexuality by flirting in the woods: emerging here are practices of resistance or adaptation to class relations based on processes of appropriation, accumulation, or extraction.

These narratives and 22 drawings, gathered inside a book and brought to CRAC Alsace, enable Jorge Satorre to connect the interior of the art center, protected by its thick defensive walls, and the exterior, a garden that runs alongside. Indeed, these drawings document in detail the various positions of an anonymous flirting couple dressed in a black jacket and a gray sweatshirt, and serve as models for molds dug directly in the ground of the garden, holes in which concrete is poured and from which fragments of bodies, arms, legs, butts, hands, hips, stomachs are extracted. Remnants of desire that, split from the earth, will be laid out throughout an open art center now exposed to the elements.

Acción Cultural Española (AC/E) supports the exhibition through the Programme for the Internationalisation of Spanish Culture (PICE), in the framework of the Mobility grants.