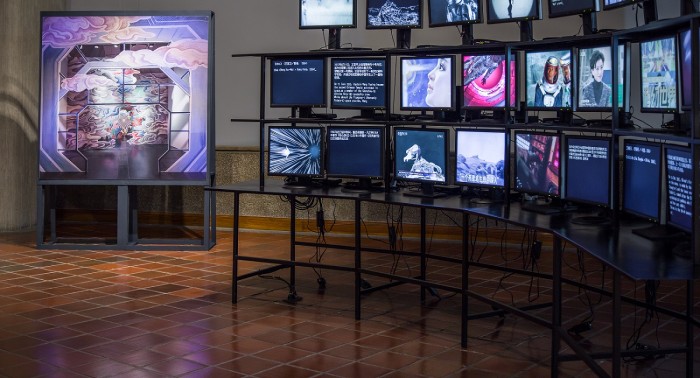 To represent or perform the path? 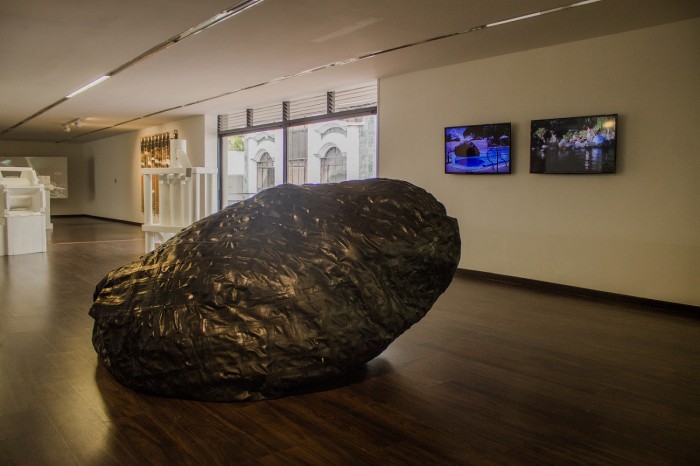 Initially, the Salones Nacionales (instigated by the Colombian government in 1976) were merely an attempt to represent the nation’s art production; a jury selected what was best and most representative. The initial format was based on certain principles, such as the belief that territory is a physical entity, defined by and reduced to geography. Given that such was the case, the faithful representation of territory was understood as a feasible task. Lastly, there was also the belief in something like a Colombian “identity” or a specific type of “Colombian art.”

Given the problematic nature of these positivist and essentialist ideas on territory and the possibility of representation, the government changed the format some ten years ago, granting curatorial research fellowships by region, charged with investigating each of the nation’s regions based on conceptual hypotheses. At least in theory, the most interesting aspect of this new model was that first, one would no longer speak of “the nation’s best artists” but rather, each salon edition would be conceived of as a constellation of research-based ideas and forms. Second, the model sought to change what the notion of territory signified for the salones. It was no longer a parcel of land defined by geographical limits, but instead a network of practices, affects, discourses, institutions, etc. In this sense, we are dealing with a more performative vision; something progressively constructed, rather than established, that takes form as it unravels. Looking at the notion of territory in this fashion also dismantles notions of identity in general as well as identity understood as tied to geographic place. A final interesting point is that the new model (again, in theory) problematizes what it means to represent.

The text with which the curators of the latest version of the Salón Nacional presented their project [1] has specifically been structured on this performative and non-essentialist vision of territory. It emphasized “clearing path” (“ir por la trocha”) as a method. Notably, this latest, forty-fourth version of the salon may be the first to concern itself in the most serious possible way with the network of problems and concepts that the salon’s model-change sought to overturn a decade ago —and that has ever been an object of unending debate and polemic among Colombian art-world players. 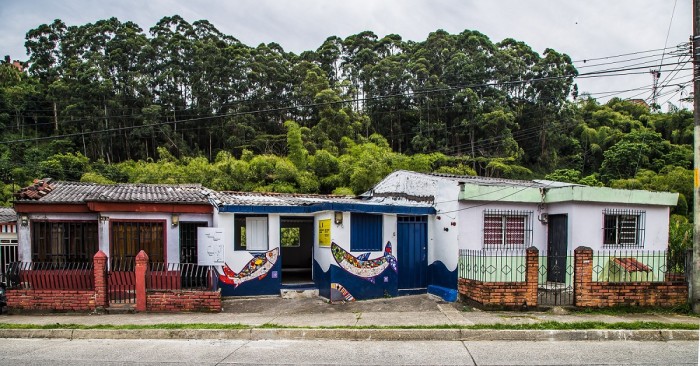 We find Colombia’s typical themes and materials in the current Salón Nacional: coffee, cacao, coca, scythes, fallen logs, confiscations, prostitution, plastic surgery, guerrilla warfare, rivers, sicario-style assassinations, gold and mining; leftist politics and failed democracies. At first this is presented with a certain hint of self criticism and mockery, or as an exacerbation of nationalist/essentialist criollismo; but these quickly fade away. At first, viewers may feel as if they are observing a landscape, a picturesque representation of Colombia’s creole culture. Then everything gets more complex as you make your way through Pereira’s old Rialto Club. The curatorial proposal calls to mind an idea I read in a text by Colombian writer Juan Cárdenas: “the history of the banana (or any other natural resource) in the Latin American tropics also means pointing out intricate and often obscured connections between exoticizing images and neo-colonial exploitation.” [2]

Thinking about the way natural resources and the economy configure the landscape turns out to be a conceptual network quite in line with Colombia’s current political situation, of peace accords with FARC guerrilla, that update the urgency of this issue: land, its distribution and use lie at the heart of the matter. As you climb higher through the main exhibition building, layers are added to the idea of landscape that is itself the proposed object of problematization. 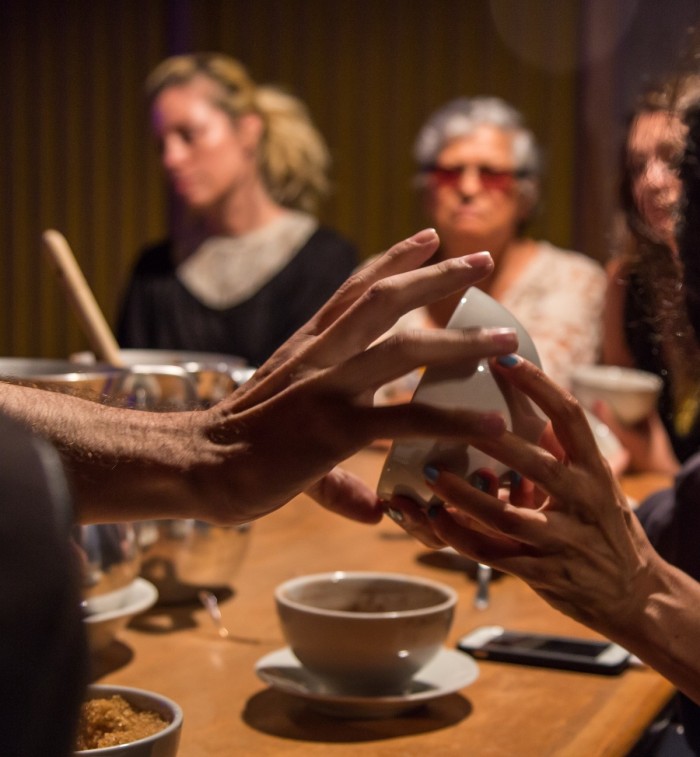 In one gallery, work by Luisa Ungar and Milena Bonilla is nothing more than photographs of the residue a substance leaves in a teacup accompanied by phrases that make its images both ambiguous and suggestive. The photos are from a performance where the artists “read the chocolate,” i.e., carry out a mystic practice, a practice we could also call feminine, from another time and part of other logics and economies, in which magic and speculation had a place in an explanation of the world. The act of reading the images of the residue chocolate leaves behind in a teacup is a subtle gesture that goes against the putative “science-ism” and objectivity that some art scholars take on in their work. This work, framed by this show, allows for a twist in the curatorial script: throughout the exhibition we see cacaos, a video of Cuban poet Nicolás Guillén speaking of coffee plantations, research on mining —using methods more academic or advertising-related than poetic— parcels of land, fallen tree trunks, a scythe that sports part of a tree rather than steel blades; yet in the middle of it all is this work by Ungar and Bonilla that de-instrumentalizes and un-frames the issue of “natural resources” from the predictable and merely representational. A short video by Rabih Mroué, on the same floor, explains how to make art politically, instead of art that speaks of problematic issues, fancying itself political for that reason. The artist plays with the limits between truth and fiction and alters hyper-codified reception formats like theatre or video; plays with questions like transmission and real time; all as a means of creating confusion among viewers with regard to good and bad, official historical accounts and fixed identities. 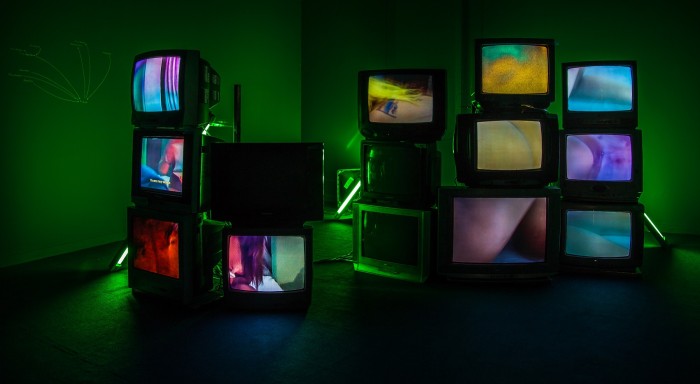 A piece by Edwin Sánchez comes out of research on the prostitution economy among agents of armed conflict (members of the armed forces and guerrilla fighters). This is notable because while the artist has come to be known for investigating Colombia’s most sordid problems, his installed works’ latest strategies attest to a de-construction of the pornographic image, a mechanism increasingly needed in Colombian art.

La Decanatura (Elkin Calderón and Diego Piñeros) goes to the Chocontá Center for Exterior Spatial Communications —where the parabolic antennas that connected Colombia to the outside world before the advent of the internet stand— to stage a children’s orchestra performance. The video seems to be the representation of a science fiction landscape where the past is confused with the future. It is an expertly produced aestheticization of ruin. Performing ruin is a gesture that —by being so fashionable— could be seen as banal and over-done; but the images’ power rescues the gesture. El Colectivo Maski seems to start out from the salon’s institutional motto of “coffee region as cultural landscape” and undertakes research on the city of Pereira’s public space. They discover a state policy where the local government bought public-space lots and marked them off with yellow lines designed to prevent street vendors from setting up within them. The artists reproduce such lines inside the museum in allusion to the administered territory that is public space. 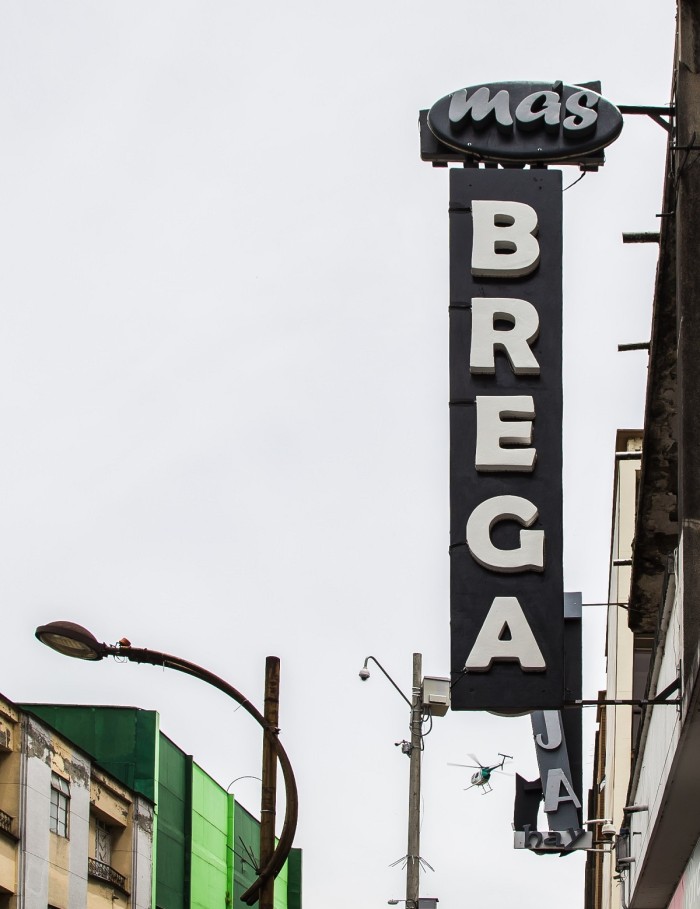 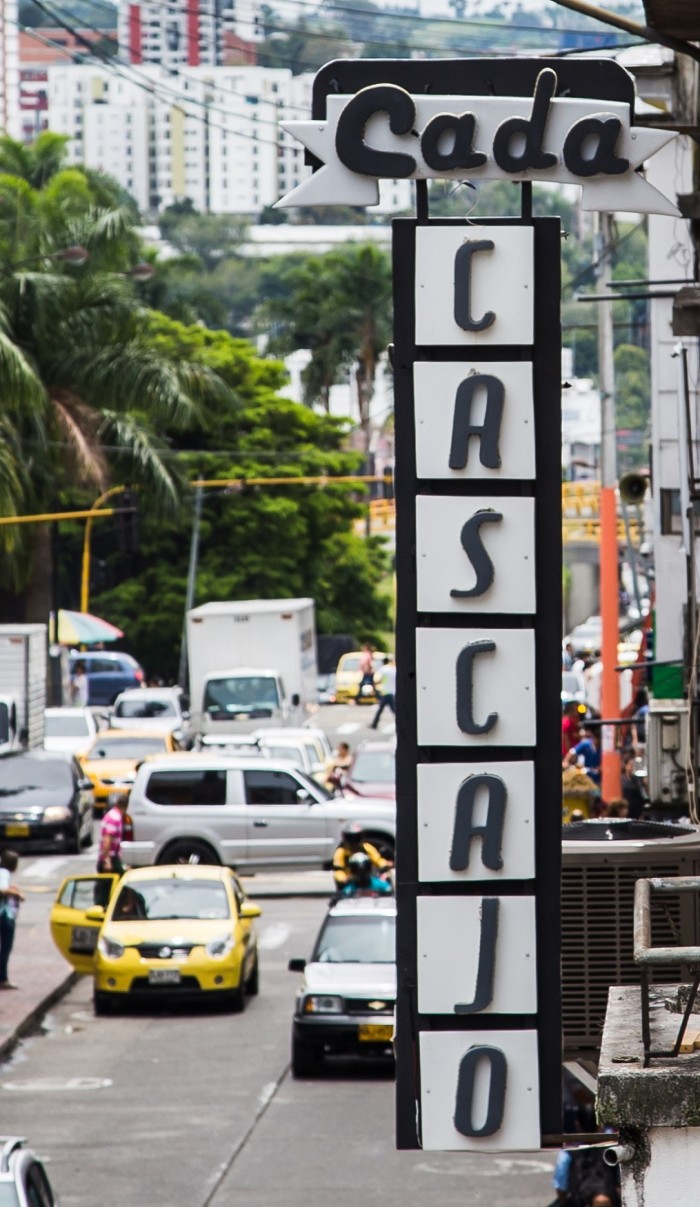 The curatorial script gets all the more complex at the Museo de Arte de Pereira where, among other artworks, we find in the first gallery an in situ sculpture by Andrés Felipe Gallo that resembles an avalanche (recalling the historical catastrophe in the town of Armero and its sculptural effects) and up front, an artwork by Carolina Caycedo that seems to be an investigation into dams/reservoirs as a kind of motionless water —a dead reflection in aqueous stagnation. What is marvelous about this artwork is that it was not a screed-like denunciation, but rather a poetic and visual exploration of the dam as a terrible sculptural exercise. Work by Fredy Alzate also explores the changes mining inflicts on the landscape. Related to this category of nature as creator of forms, elsewhere, outside the museum in the Zea neighborhood’s community center, Grupo Otún develops an artwork to look at rivers as sculptors of stones. The Museo de Pereira exhibition ends with a grandiloquent installation by artist Ming Wong, executed through studies of Chinese Opera set design and oscillating between myth, progress and science fiction. It’s a fortunate ending because it adds contrast as it takes discussion of space-creation complexity to a higher level.

The curatorial project’s other components also serve to nourish proposals enunciated in a prologue to the show: the “Psicotropismos” seminar whose object was “to understand that it is possible to adopt different points-of-view and discuss drugs and their consumption as elements of world-development and Colombia’s [3] recent evolution,” an intriguing notion that supports the basic curatorial thesis of thinking of landscape in a material fashion, as everything from production modes to the economy. 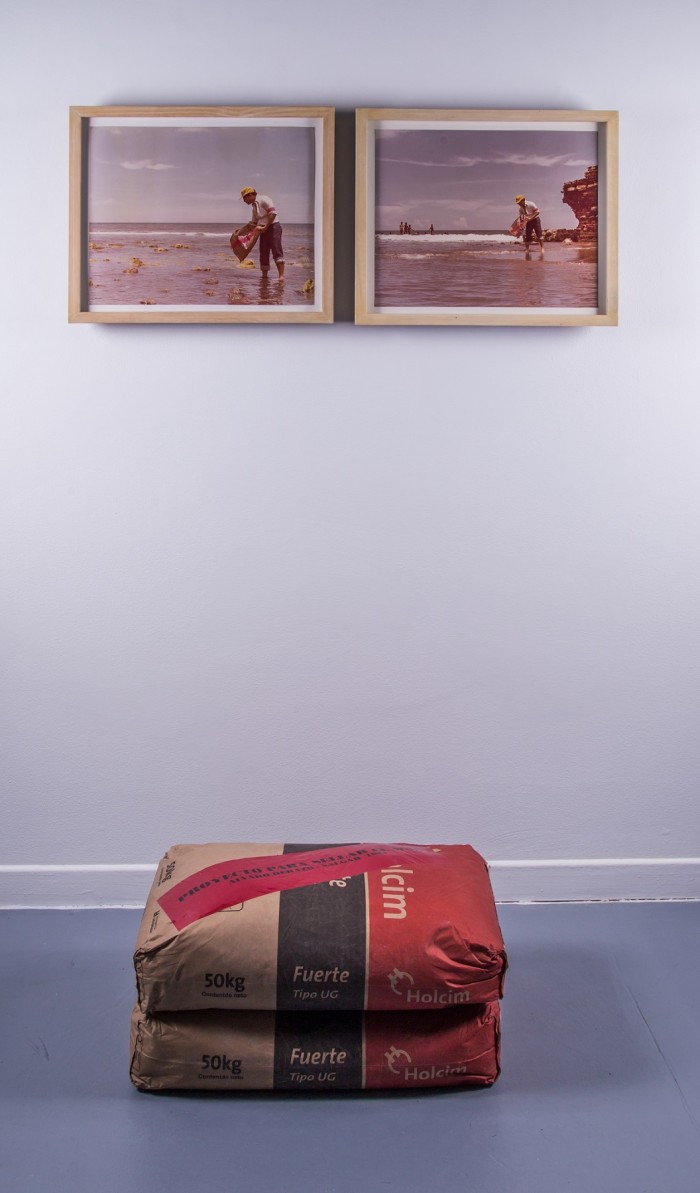 There was guest curation, including that by La Usurpadora (María Isabel Rueda & Mario Llanos) on two artists from Colombia’s Caribbean, Alvaro Herazo and Alfonso Suárez, who have not been extensively studied. It was an utterly unpretentious and simple, yet juicy exhibition that rescues artworks with poetic strategies that are worthwhile and unusual within the framework of Colombian art history. The 44th Salón Nacional includes a rich publications series and numerous performances by Wilson Díaz that no doubt (alas, I could not be present for them) added additional layers to the curatorial proposal.

If we assume curation is creating an essay in form (as artist Herlyng Ferla described the present curatorial project), then this is a very good essay indeed. It is legible; it takes viewers by the hand on every passage between this thing and that. The natural resources chapter, divided into cacao and coffee, banana, agrarian reform and social struggle sections, slowly leads us to a section on social problematics and minorities (prostitution, insurgency, the LGBT community, etc.) as elements that configure landscape. Then it’s on to a territory and transport section (“artists move through their territories”); the territory and bureaucracy section and the section on nature as a sculpting agent. The show completes the task of making viewers think about landscape, and in a nation that has lived a problematic approach to territory, nature and its resources, considering landscape in terms of production modes is an important contribution. It was an idea that was ultimately quite well represented; an argument whose complexity increases as viewers make their way through the exhibition.

That said —given the curatorial essay promised “clearing path” as methodology [4]— I might have expected less hand-holding and more feelings of being in the middle of the jungle; that there had been moments when, deep inside that wilderness, the machete blade had dulled. That there had been instances when words were insufficient to detect the precision and control with which the argument was constructed.