arteBA 2016: FOR THOSE WHO RESIST THE DESERT

Art fairs are a mirage in Buenos Aires. As if on a stage set, artists, gallery owners and collectors prepare for months to put on a series of events for the arteBA week, exhibitions and parties that portray an active, restive scene that, year by year, evinces considerable growth in terms of total art-space numbers and overall market interest. The truth is that once art week is over—between the exhaustion and the euphoria hangover—the city goes back to its normal course; the international visits and frenetic days come to an end.

Buenos Aires is a cool city to live and work in, with a small but active art scene that still supports a certain bar culture, a culture of clashing ideas and confrontation, explored in independent spaces. Galleries are a misfit format not always chained to the market and to moving merchandise; they can be anything from a space for parties and exhibitions to a study center or storeroom.

This year arteBA celebrated its twenty-fifth anniversary, and the interesting part of analyzing that process is not just what impact the fair had on the market, but as well, a number of modifications and changes that it brought on in the art world, in exhibition formats, in artworks and in artists, since it seems inevitable to think of a fair as an isolated, protected space. Every edition leaves behind its echoes and consequences.

If we look back at the first image arteBA presented in 1991, we see the fair entrance topped off with two columns and urns, as well as a long hallway with white drapery that falls to the floor. It looks like a wedding photo from the 1990s—some sort of neo-liberalism celebration from back in the day—but it’s unfair to condemn and crystallise the fair with this image. In the ensuing twenty-five years there were numerous changes, yet inevitably something from that image sticks with me every time I attend a new edition. “Pizza with Champagne” was one of the Carlos Menem presidency’s mottoes back in the 90s, a mix of fast-food and fine drink that defined the era’s culture and politics, marked by privatization and unemployment. That image and champagne as the drink of the illusion of social mobility persists at the fair; Chandon is the event’s principal sponsor. We make our way through arteBA with all the joy of that half-filled flute, at once forgetting and remembering what’s happening right now in Argentina, where a neo-liberal right-wing governs. We ended the night at Kentucky, one of Buenos Aires’s most famous pizza joints, at a branch just across the street from the fair venue.

In 2001—the year of one of Argentina’s greatest economic crises—one of the spaces that stirred up the greatest resonance in the art world emerged from the fair. The Barrio Joven section was born as an initiative in which emerging galleries could participate in the fair at a lower cost. Year after year, a group of some twenty Latin American galleries and “young” exhibition spaces clustered in smaller areas toward the back of the fair venue, to establish their first market contacts and make a handful of sales. These spaces undoubtedly defined certain artists’ production in the years that followed. Barrio Joven’s stands became shop windows packed with little framed and unframed objects, alongside an urgency to sell, at whatever price, to at least cover overhead and pay the Fundación arteBA. This year the section seemed a little less cluttered; though the structure is the same as in the early years, there are fewer, but larger, artworks, at higher prices. Some galleries, barely months old, take part in the fair as a way of making themselves known; others that have been around longer take out booths in this section to reduce outlay; certain non-gallery-format spaces adapt the space during fair days as way of participating. Curated by Raúl Flores and Manuela Moscoso, the 2016 edition featured some proposals that distinguished themselves in comparison other years, such as that presented by UV estudios—a space that for a year has operated out of a rented house in Buenos Aires’s Villa Crespo quarter—and which managed to re-create a festival-like atmosphere that has been absent from the scene for some time. UV puts on one-day shows, theme parties, some artists have workshops there, and some of the rooms are used as temporary residences. They presented a video by the Uruguayan collective known as Básica TV, in which three members walk through a comfortable, middle-class apartment, parading about, tripping over one another and turning into household objects. 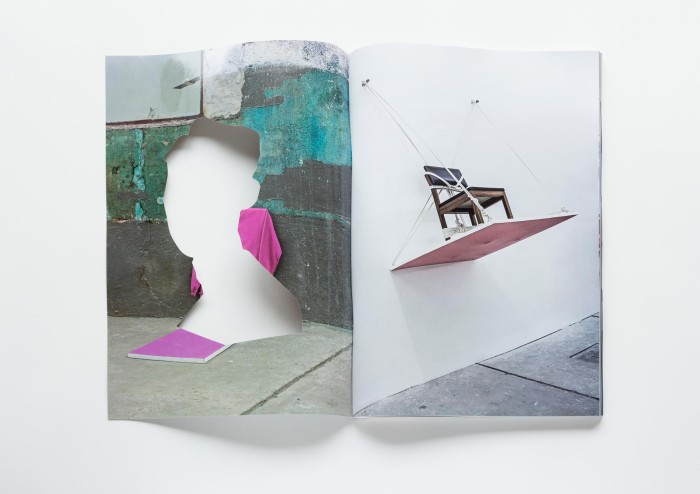 The usual evocation is that the fair replaces an “absent biennial”—makes up for the lack of some mega-event that might bring together artists, be a forum for debate and mobilize the scene. For that reason, arteBA includes a large area given over to art publications, a number of photography-focused booths (curated this year by Patrick Charpenel), and a space for individual projects, curated by Manuel Segade, who revisits the topic of body and gender. There was a debate and conference forum, coordinated by Victoria Noorthoon, and the fair even boasts its own magazine. Edited by Santiago García Navarro, Rafael Cippolini and Inés Katzenstein, it is to be published twice yearly and will seek to document work by artists in Argentina and abroad, in a review-based format not unlike Artforum’s.

The section that arguably gave rise to the most intense discussion this year was DIXIT, a fair space realized for a third consecutive year, that invites curators to select participating gallery artists as well as certain privately held artworks to develop a hypothesis that also aims to present an “historical” exhibition as part of the fair. The two previous editions, curated by Andrea Giunta and Julieta González respectively, privileged an international agenda that positioned Latin American art between conceptualism and its legacy, between politics and denunciation. This year the section seems to have taken an at-least 180-degree turn to take up strictly local concerns, solely inviting Argentine artists to participate. Entitled Oasis. Afinidades conocidas e insospechadas en un recorrido por la producción artística de nuestro tiempo (“Oasis: Known and Unsuspected Affinities on a Tour of the Artistic Production of Our Times”), curators Federico Baeza, Lara Marmor and Sebastian Vidal Mackinson ask, “Can contemporary Argentine art be defined by some possibly insular condition? Can we still imagine a place of withdrawal, an oasis, on the map of global flows? A separate, unclassifiable artistic landscape?” The premise was presented spatially through an accumulation of artworks, many supported by a series of wooden structures similar to those used in billboard advertising, with others suspended from the ceiling in such a way as to interfere with visitors’ movement through the area. The first impression this year’s curation presented was one of moving on to the rest of the fair, without interruption. Elsewhere, certain projects recovered something of the interventions some artists made at recent years’ arteBA editions, like the prize the Rosa Chancho collective organized, or work Axel Straschnoy presented at one of the first Petrobras prizes. “Oasis” subtly provided an historical perspective on the fair, gathering a series of artworks that were affected by art market’s evolution and slow growth vis-à-vis arteBA.

Once again the fair was a success. Its presence as an oasis has never been better defined.