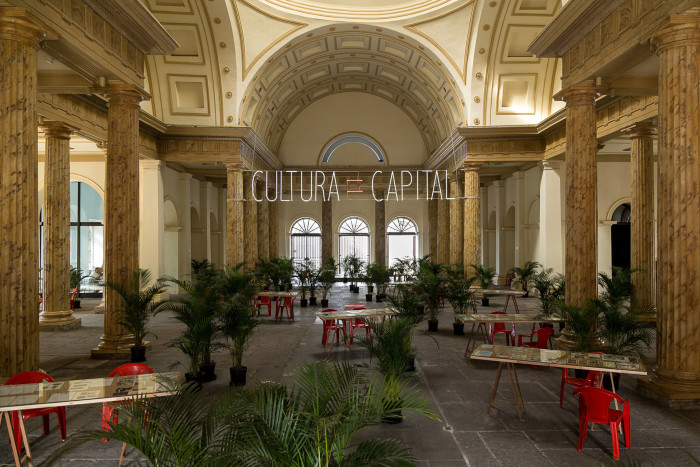 ArtRio 2015 Week: Under the shadow of a cultural renaissance

The morning of Wednesday, September 9th greeted the early guests of the preview of the carioca fair with grey, heavy clouds that darkened the sky and threatened heavy rain. This was undoubtedly a dire omen for the fair, as Brazil’s economic boom is by now a thing of the past and the country is battling feeble economic growth while facing serious political turmoil. Accordingly, the fair was smaller than its previous editions and hosted fewer galleries, especially from the international scene. Located on the previous site of the Port of Rio, it occupied four pavilions on Pier Mauá in the Guanabara Bay. In the first two pavilions, the booth of Parque Lage and the Bradesco Award, curated by Bernardo Mosqueira stood out: . In a careful arrangement, the award displayed the work of the three winners: Carla Hage Chaim, Carlos Melo, and Beto Shwafaty, each having received a six-week production residency, respectively in Lugar a Dudas in Cali, Colombia (Shwafaty), Pivô in São Paulo (Melo), and Galeria do Lago, Museu da República in Rio de Janeiro (Hage Chaim). Balancing the formal concerns of Hage Chaim, the mystical and nature driven investigations of Melo and the politically engaged practice of Shwafaty, the award was an adequate sample of contemporary Brazilian production. 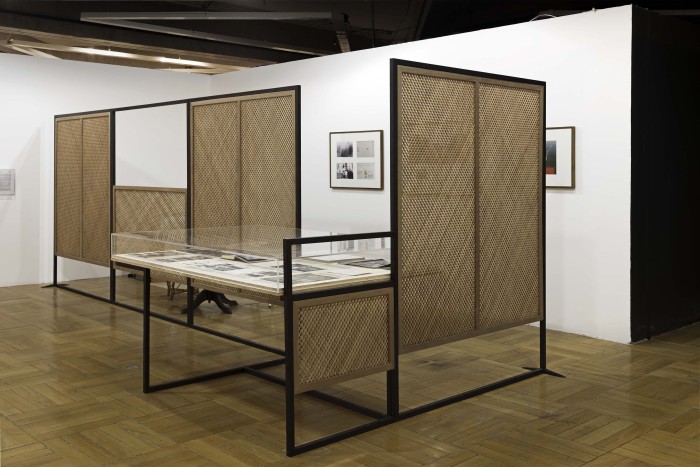 Pavilion 3 had the biggest concentration of heavyweight galleries including White Cube, Nara Roesler, Luisa Strina, Galeria Vermelho, Fortes Vilaça, Galeria Triângulo, and David Zwirner. A real highlight was the work by Opavivará! at A Gentil Carioca, entitled SOFARAOKÊ (Karaoke Couch), in which the audience was invited to sit, sing (and dance). By the last hours of the fair, the volume was rising and a spontaneous party began at the booth. Clearly, such a subversive act during the fair was not so thrilling for some booths and for the organization alike. Security personnel permanently tried and (fortunately) failed to end the karaoke. It was incredible to see Opavivará! demonstrate that even in a highly commercial context, relational works can function. For those less willing to sing or dance, the joyous booth also showed a beautiful wall piece by Laura Lima, Anônimo.1 (2015), built out of fabric and wood parts. At A Gentil Carioca’s headquarters in downtown Rio (Centro), José Bento had a solid solo show which included the presentation of works in the surrounding streets of the paradoxically named Saara neighborhood. The sheer energy produced out of the movement of people, the diversity of items on sale, and the soundscape built out the mashup of the different shop music and salesman armed with microphones was truly exhilarating. 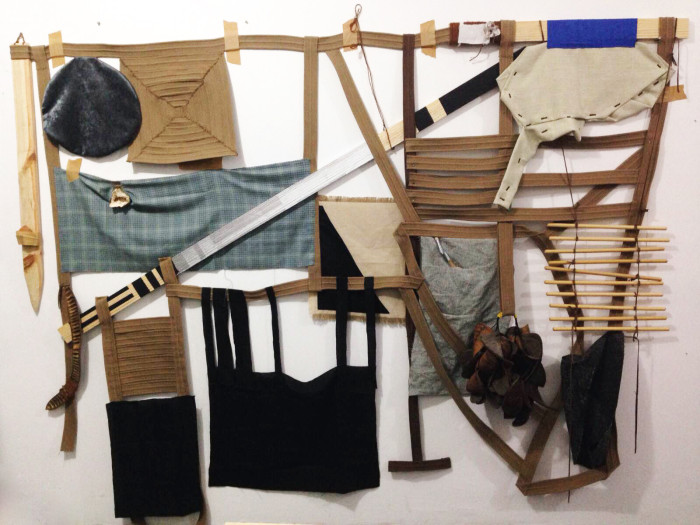 In terms of its approach to booth making, Mendes Wood DM’s proposal was in a league of its own. The São Paulo gallery offered a group show of four artists haunted by shards and spectres, dominated by Maria Loboda’s ruin-like structures. One wall displayed Celso Renato’s beautifully fragile work combining old wood parts and painting over them, whereas the opposite wall presented photographs by Francesca Woodman and the magnetic drawing-like canvas of Solange Pessoa. It was a truly impressive curatorial gesture that combined different generations and styles in a coherent show. Albeit different, Galeria da Gávea’s solo booth by António Guerreiro was also quite compelling. Guerreiro is particularly known for his work in the 1970s and 1980s during which he documented the glamorous universe of soap-opera, cinema and theatre actors, as well as musicians and other famous characters. His photos are full of sensuality, humor and mystery, and were a refreshing presence in the event. 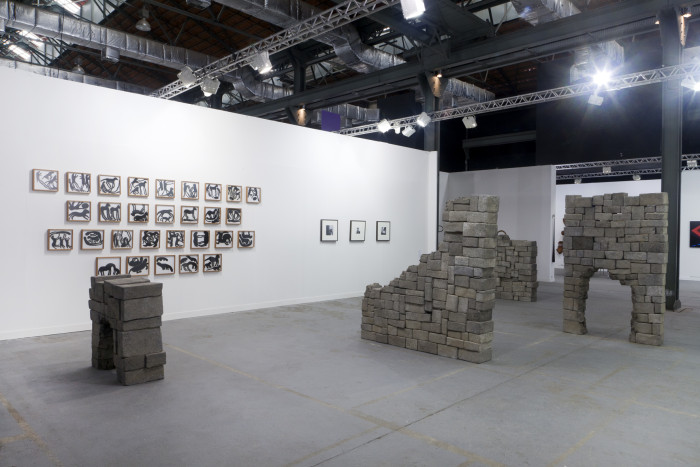 The fair also included a group show curated by Carolyn H. Drake and Bernardo de Souza in the section Prisma (Prism). Entitled Through a glass, darkly, the exhibition included works by Elmgreen & Dragset, Erika Verzutti, Gabriel Abrantes, Keren Cytter, Liz Magic Fraser, Luiz Roque, Neïl Beloufa, and Opavivará! Exploring the friction between representation and reality through works that reassess our daily engagement with our highly mediated environments, the show’s primary analysis was the study of how disparate entities such as desires, ideas, objects, and bodies are given a similar position as commodities. Witty and enigmatic, conscious of its commercial context as well as a willing to subvert it, it was one of the most stimulating proposals of the event. Its dark and yet humorous ambience added a much needed break from the rigidity which usually stamps art fairs. 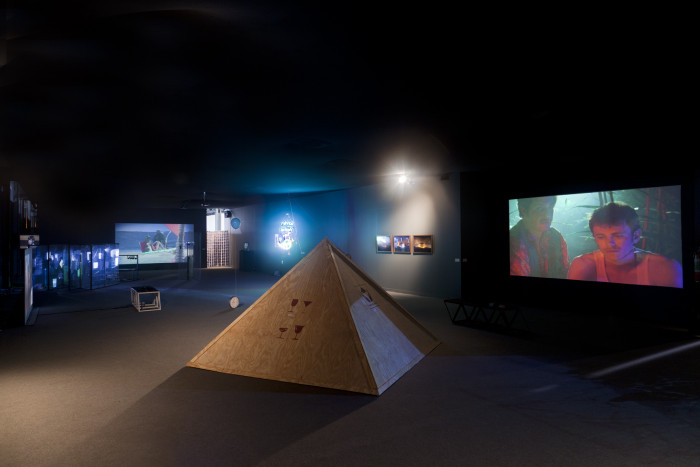 Arguably, the success of a contemporary art fair is linked to the amount and quality of parallel events and exhibitions. The surprise award needs to go to TRIO, the new contemporary art biennial of Rio. TRIO focused on tridimensionality, by using the iconic, intricate, and stunning city landscape as well as its rich art history heritage whose better known examples include Hélio Oiticica and Lygia Pape. However, the actual show was somehow disappointing and much less multidimensional than the press release would have made us imagine. Even though it presented strong works by the likes of Diango Hernandez, the general feel was that its first edition will not be a memorable event, neither locally nor internationally.

Almost a week before ArtRio, the Modern Art Museum of Rio (MAM) opened a duo show by Daniel Steegmann Mangrané and Philippe Van Snick, curated by Marta Mestre. The choice to exhibit work on cubic wooden structures at waist level left the space open, thereby fruitfully using the architectonic features of the building and the garden. Delicate and precise, the dialogue created a powerful symphony in which Mangrané’s small sculptural pieces were three-dimensional answers to Van Snick’s photos and vice versa, building a coherent whole that also echoed the outside landscape of Burle Marx gardens. 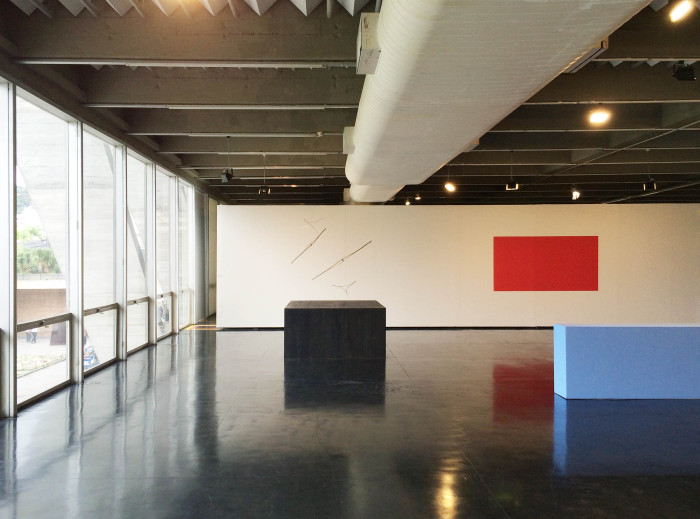 At Parque Lage, one of the most dynamic art schools in Brazil, currently directed by Lisette Lagnado, Luisa Duarte curated Quarta Feira de Cinzas. The group show tested a less visible aspect of Carnival: the day after or Ash Wednesday, understood as an image for a post-utopian time. It presented an impressive list of artists such as Adriano Costa, Jorge Macchi, Lais Myrrha, Laercio Redondo, Rosangela Rennó, Miguel Rio Branco, and Matheus Rocha Pitta. Its high point was arguably Marcelo Cidade’s Confortável conformismo 1” (2015), a haunting narrative about absence with magical echoes built out of a burned mattress whose precise installation in a less visible location added drastically to the work’s monumentality and impact. Casa França Brasil hosted a number of small shows curated by the recently appointed Director, Pablo León de la Barra. Highlights included the display of research exploring the history of the institution, and Beto Shwafaty’s solo show, an extraordinary reflection on the modernist narratives that still influence Brazil today – Brasilia standing as the highest symbol of a development plan based in order and progress, a motto from which love, originally part of the phrase, has been removed.

The Museu de Arte do Rio (MAR) currently hosts four exhibitions about Rio in the 1700s, the work of Rossini Perez – the female presence in the city through the figure of Tarsila do Amaral – and the photography of Kurt Klagsbrunn. As such, it offers a multilayered portrait of the city. The multidisciplinary and non-chronological posture, mixing goldsmithing with candomblé items and paintings from the 18th century with contemporary art, echoes the complex symbolic reality that is met in the city streets, making it a successful solution for its mission and identity. Amidst some controversy regarding its role within the larger regeneration plan that has hit central Rio in the wake of the Olympic games, MAR has quietly and steadily created a remarkable place for itself that has made it an fascinating example of a museum of the future.

From a somewhat abandoned city turned towards its glorious past and losing importance to Brasilia or São Paulo, Rio de Janeiro is currently experiencing a renewal that is extraordinary to witness. The appointment of figures such as Marcio Botner, Lisette Lagnado, Pablo León de la Barra or Paulo Herkenhoff as directors of different institutions signals a dynamic movement which will be exciting to observe in the near future.

Assuming the Risk of Imagining: A Brief Review of the Institutional Cultural Landscape in Morelos

Davo Valdés takes the case of Morelos as an example to problematize: how can we justify the existence of cultural apparatuses that pay for positions in which nothing is proposed or carried out?