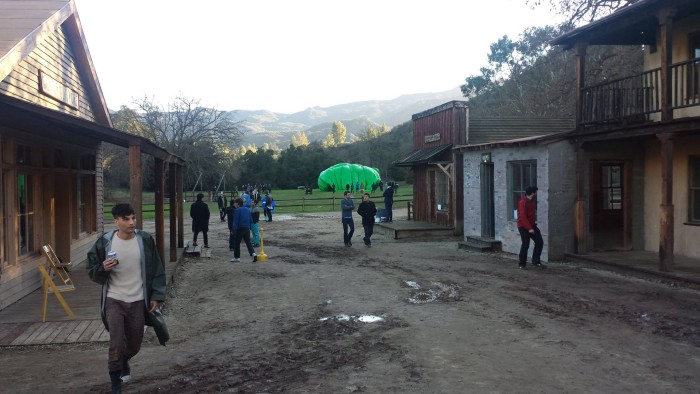 When you go off to art fairs in towns that aren’t your own, it’s always best to let the locals call the shots, turn yourself over to those who know where to be and let go of the idea you need play God who sees everything at all times. Fairs give rise to soap bubbles, people on the verge of collapse because they’ve got to get from here to there; to the parties, the gossip, the buying, the visits. We all want to post our discoveries on Instagram, make sure everyone knows where we were and with whom. At least in the hours leading up to passing out from so much art, so many drinks or a lot of whatever has lately replaced cocaine (as to what that is, I haven’t got a clue). 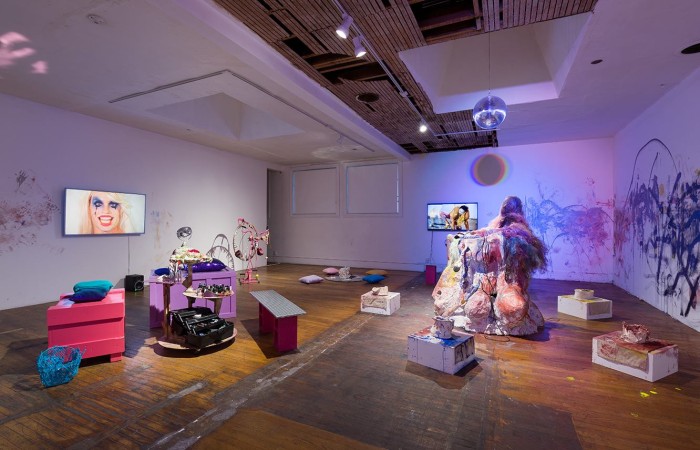 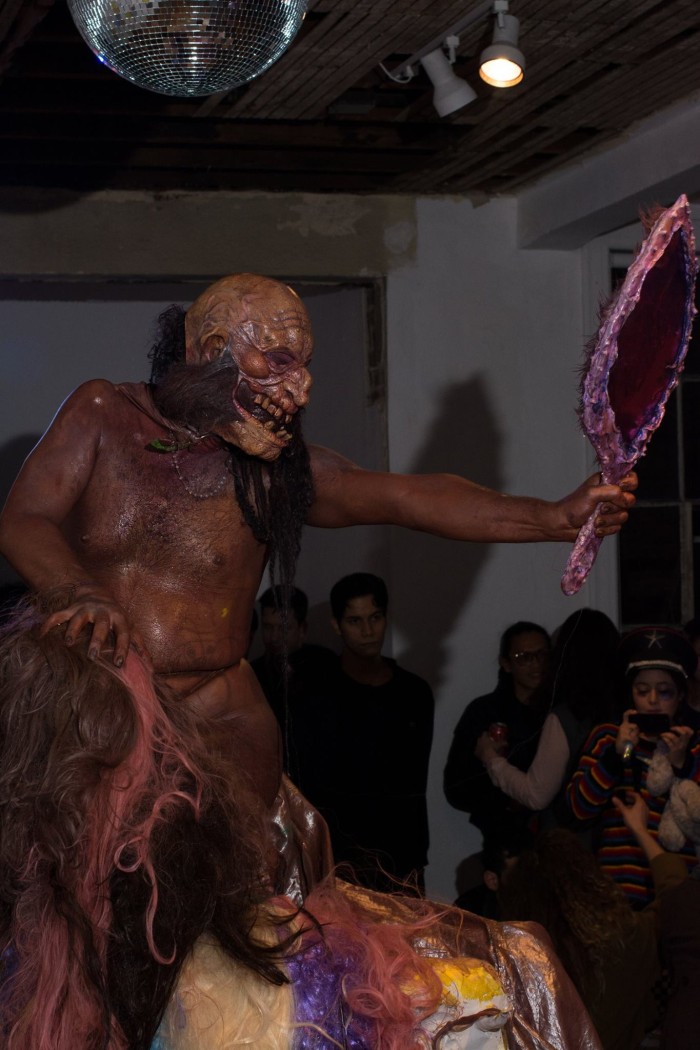 I arrived in LA one week prior to the fairs, so I got to see the opening of Sexorcises by Mutant Salon, a project consisting in a beauty salon, astrological consultation, tattoo shop, performance laboratory or participatory sculpture, monster queer, trans and post-everything which opened at Commonwealth and Council, a space run by Young Chung for the past five years and lately always crowded and reviewed by the press. For Sexorcises, Mutant Salon had involved in this event a wide group of collaborators that twisted, ran, fell, touched, tattooed, fornicated and many other things, over streaks of fat, gel, vaseline and undetermined viscous fluids. All this haphazardly took place among video, props, sound and sculptures arranged chaotically in the space. The intensity of this action that lasted for hours in a crowded ground of people drinking, paying attention and cackling intermittently, left at the end of the night a riot of waste, clutter and indiscernible elements, which, I suppose, will stay on display during the remaining month of the show.

Due to the aforementioned decadence I missed the opening of Meg Cranston, Pizza, Bagpipe, Carburetor, at Meliksetian/Briggs, a small gallery in Fairfax that usually presents small and refined shows. As I could see a couple of days later, this one was an exercise in visual representation of a list of words that Cranston had built from an online random name generator. Elegantly composed of paintings, collages and objects ranging gently between pink and pale blue, the exhibition was a haven of peace and a perfectly sentimental and full sting of irony without fuss, which is structural in Cranston’s work, as the precise insult is always saying the sweetest way. 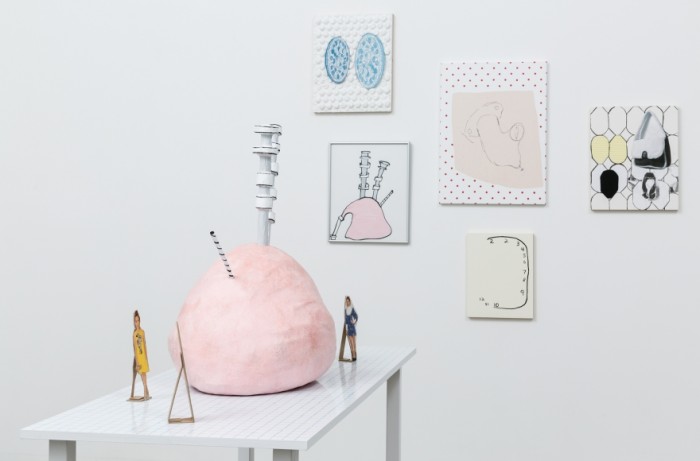 Erwin Wurm presented at Schindler House a reiteration in his long standing series of One Minute Sculptures. And yes, you had to put the stuffed dog on your shoulders, move the sponge out of its shelf, sit on a stick mimicking the pose given by the artist; you had to put on a sweater by inserting both legs on a sleeve and both arms on the other, and so on. Although the show emphasized that these were one-minute sculptures, some took ten seconds and other up to five minutes, either by its intrinsic difficulty or by the endless search for the perfect selfie. 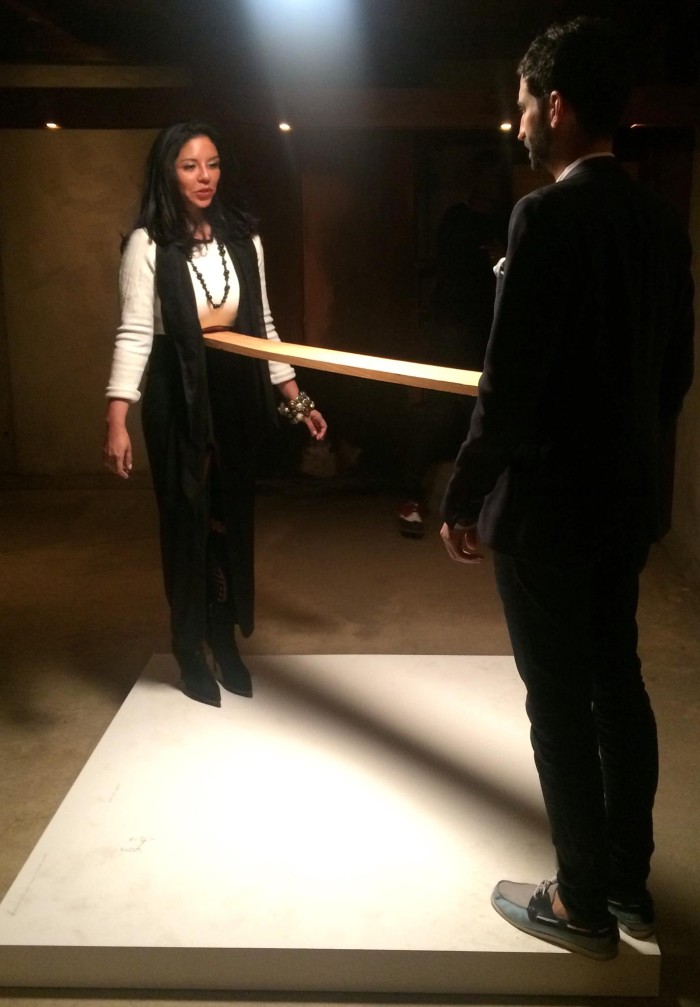 The fairs’ opening days arrived. There was no tension or freak-out, despite the fact LA Art Show, Art Bandini, The Independent Art Show, Art Los Angeles Contemporary and other shows I never found out about all opened the same night. I missed the opening of Art Los Angeles Contemporary (ALAC)—the fair with the city’s most historical relevance, with more than twenty editions to date. The evening’s headliner, a performance by Compton’s Centennial High School Marching Band came straight out of that spot that in art fair attendees’ white imaginary smacks of suspicious ethnicities and dusky streets to be avoided. The Centennial Marching Band collaborated with the always magnificent Alison O’Daniel to produce a powerful and discomfiting performance.

The next day, after spending the morning listening to gossip from some that had indeed gone, I got my friend to take me to see ALAC with my own eyes. LA’s best established contemporary art fair is miniscule—so miniscule it inspires tenderness, surrounded, as it is, by a city built on an obsession with limitless gigantism. There are just a handful of booths on a handful of aisles that did their job—looking like a standard fair found anywhere else in the world—quite well. There were very few elements in general; and even fewer for generating a critical opinion on the city’s contemporary art. ALAC presented an interesting program of events, with Kenneth Anger talking about his influences and Charlie White in conversation with Amanda Ross-Ho about the status of the image in the Internet age. For a good part of the afternoon, the fair was all but deserted, with just some couples here and there, wandering through the hangar’s corridors, with no indications of enthusiasm or good cheer. Gallery owners and their assistants yawned, drank coffee, stretched and fiddled on their devices, awaiting buyers who did not show. At the end of the day, everything looked a little less dramatic; but the scant visitor flow did give you a lot to think about. 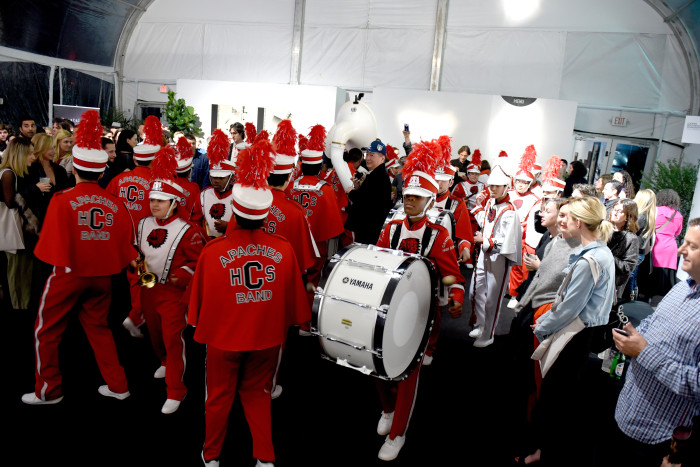 Are art fairs dying out and is ALAC the harbinger? Is LA, per se, by its nature, immune to art fair frenzy? Maybe it’s the city itself, exploding everywhere with big new galleries that pop up in zones where less than a year ago there were nothing but old bodegas and abandoned factories whose real estate values have now skyrocketed. Maybe it’s the boom in artists’ spaces, new museums opening, collections being put together and an intense influx of artists and dealers from Europe and New York, in a new taming of the Wild, Wild West, that have made the city an enormous art fair open year-round, a machine well lubed with lucre, the promise of prosperity and the hope of snapping up that piece by the artist who’s sure to be next season’s Parker Ito. Maybe at this point LA is an undivided mall where anxiety need not limit itself to one weekend and a handful of miniscule events. Despite wild growth as regards the commercial apparatus, LA fairs maintain that rare charm of disinterest, the return to human scale, the idea you can focus on a few cubicles and on one or another artwork, although naturally these thoughts are only present in my head. I can’t say what this shrinking interest means in commercial terms; I don’t know precisely if it has to do with producing events for the very few in which even fewer are able to buy; but even if that were the case, those few in LA are a great many more than ever set foot in ALAC this year. 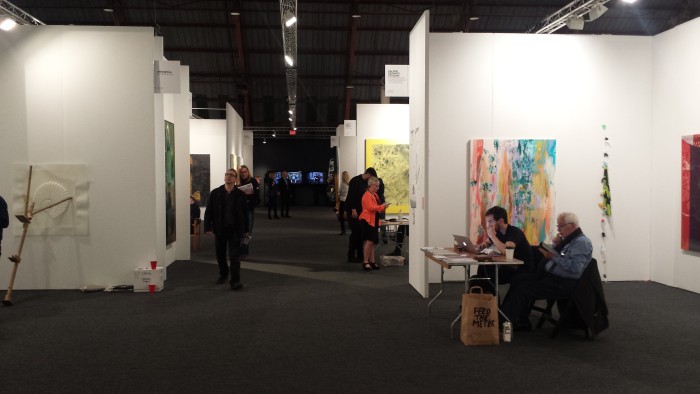 That night, far from Santa Monica, everyone was jammed into Chateau Shatto, a gallery downtown where James Ferraro presented Burning Prius—a string and electronic quartet interpreted by musicians dressed as police officers, within the framework of an exhibition of Jean Baudrillard photographs. The piece, rather a lament on getting around in a car in a city where getting around is growing ever more impossible, held up easily from beginning to end, even if most of the audience was more enrapt with their telephones and with those who were elsewhere in the gallery, imbibing and dishing dirt brazenly, unabashed by a preference for idle chit-chat over the aridity of contemporary music. 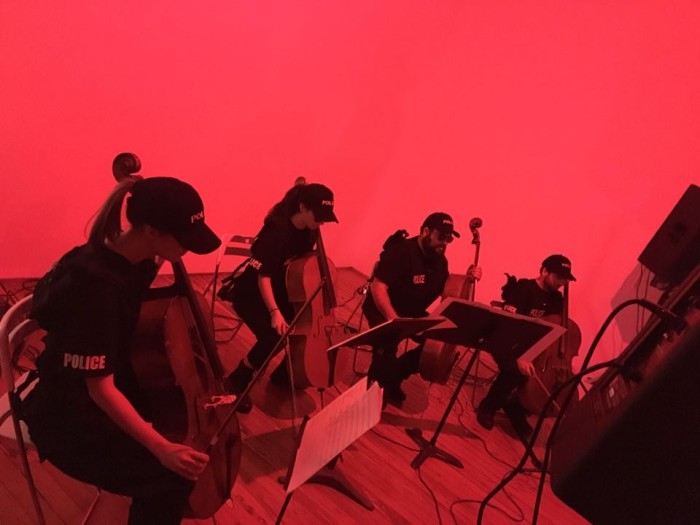 Another event said to be a must-do—at least if this review is to make any sense—was Paramount Ranch, a fair on the other side of the Malibu hills, this year in its third edition. On an Old West ghost-town set, Paramount Ranch brings together a number of galleries and non-represented artists representative of the Angelino scene, as well as enthusiasts from the post-internet generation that fill everything up with painted screen-grabs and cynical objects in contrast to their commercial and rather self-complacent nature. The day wore on amid storm alerts, traffic accidents, trees toppled onto freeways and not a little cold. Paramount Ranch promised at least one important piece, to be seen for the first time in Los Angeles: Tree (2014), by Paul McCarthy, an inflatable sculpture shaped like a butt-plug that set up the artist for quite a bit of controversy—even a knuckle sandwich or two—slightly more than a year ago in Paris. That said, life isn’t all milk and honey and merciless winds forced Tree’s deflation. Attempts to re-inflate failed, so, for me at least, the final Paramount tally—besides the grippe and muddy shoes—is an image of something big in the process of inflation or deflation without ever really knowing what was going on. Friends said it was better to stay home and maybe they were right. The tourist’s preoccupation with getting out there is not always the sagest counselor.

The weekend concluded. But the LA fair will be open every day of the year. 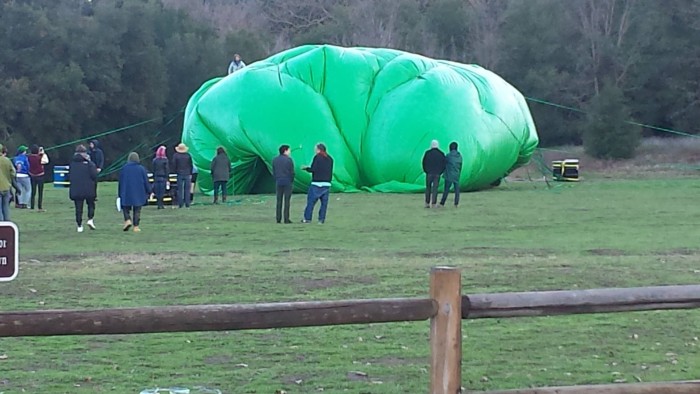 Victor Albarracín Llanos is a curator, artist and author based between Bogotá and Los Angeles. He has co-founded and been involved with artist spaces including El Bodegón (Bogotá, 2005-2009) and Selecto–Planta Baja (Los Angeles, 2014–). He was the recipient of the Premio Nacional de Crítica in 2009 and of a Fulbright Fellowship (2013-2015). He is part of the curatorial team of the 44th Salón Nacional de Artistas to open in September 2016 in Pereira, Colombia.