"And yet it rises" - Safouane Ben Slama and Samar Hejazi at Cassandra Cassandra, Canada 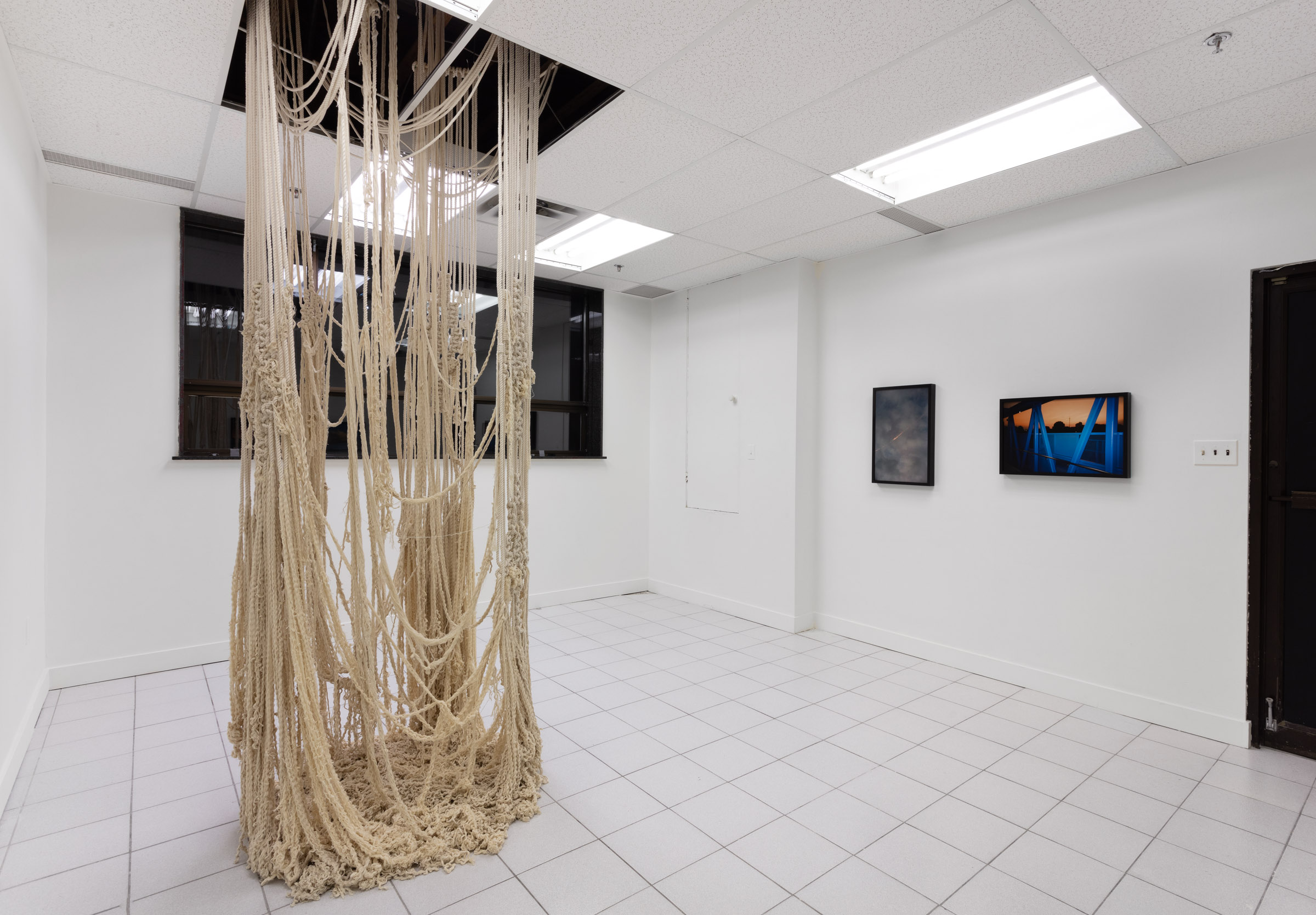 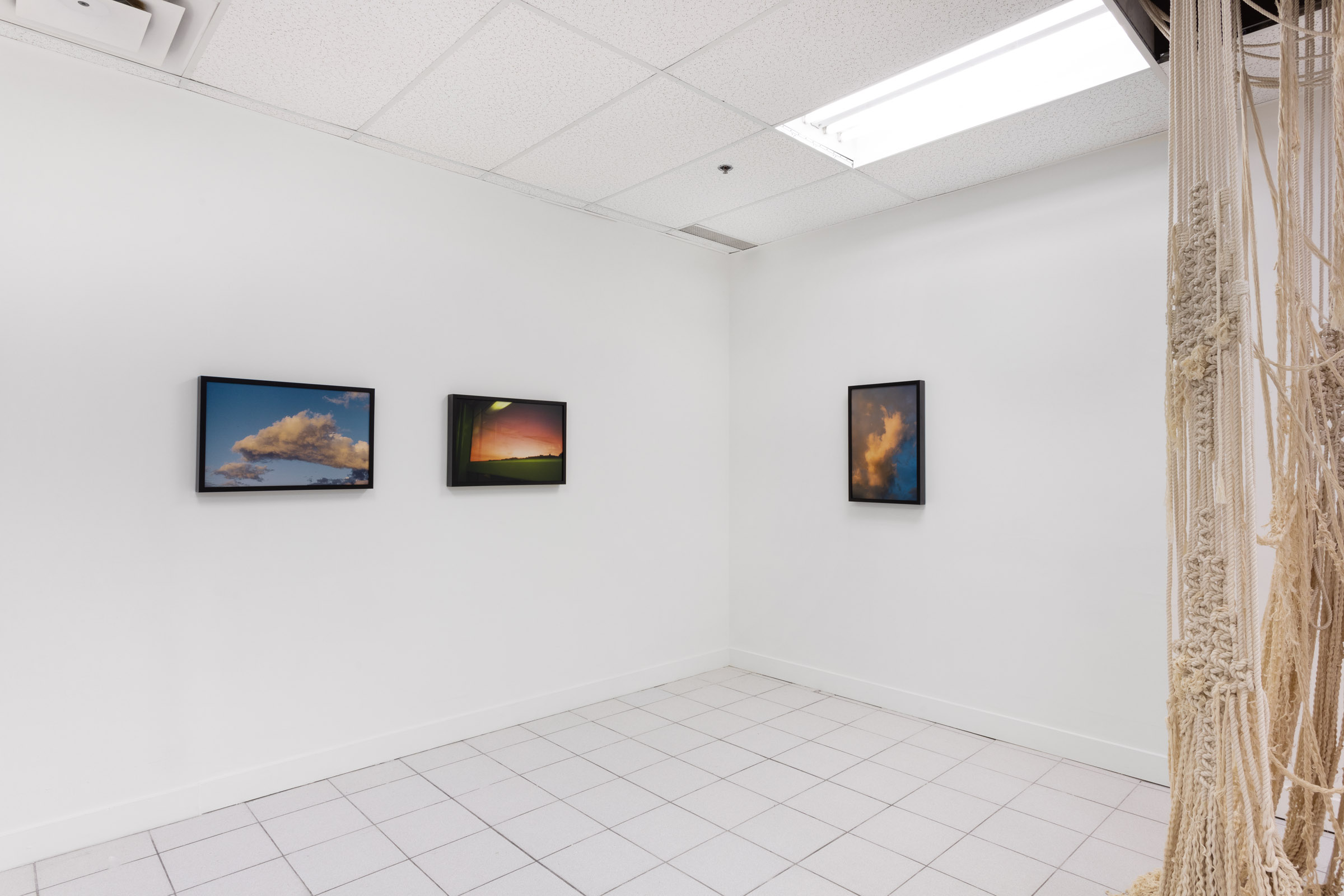 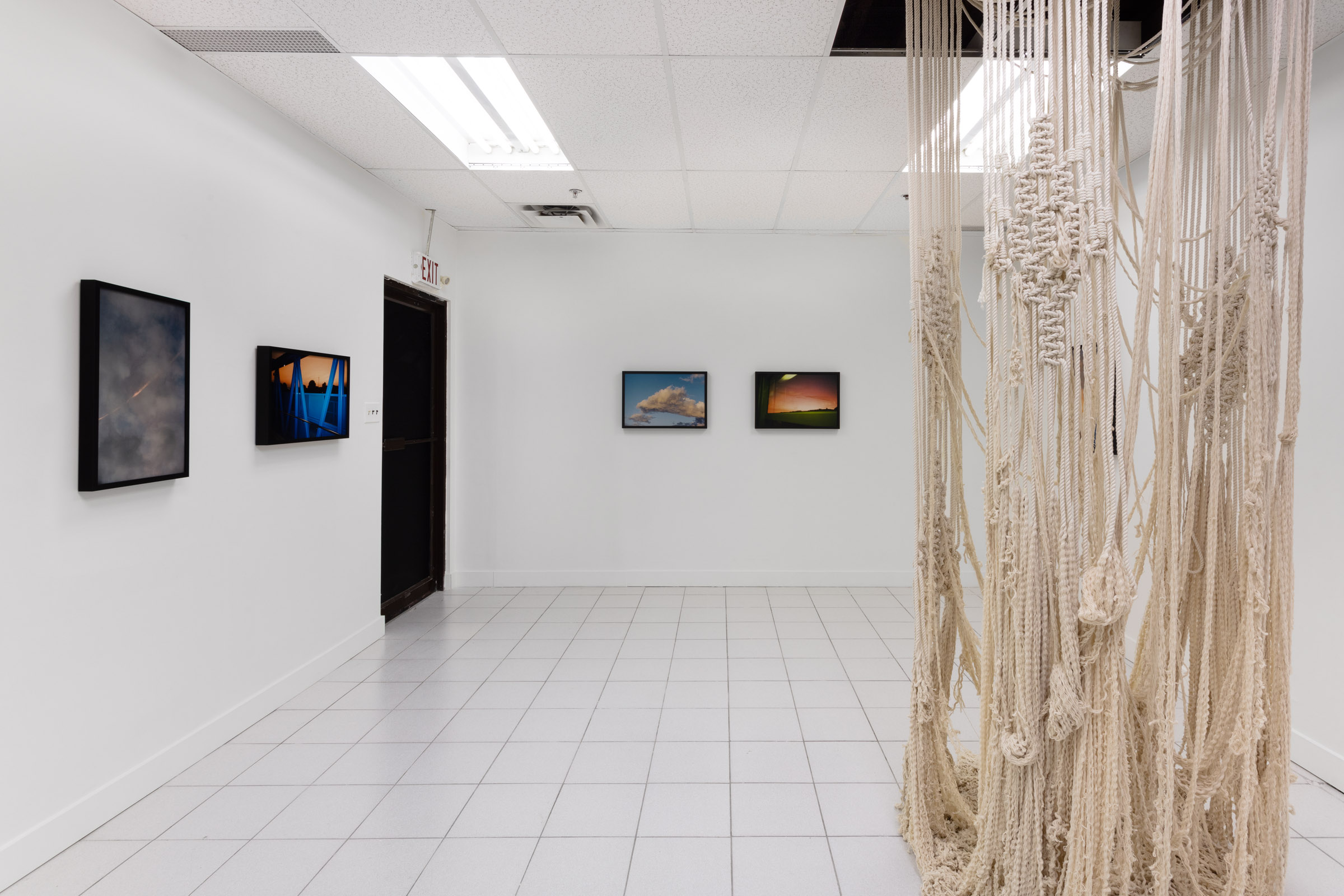 Patterns repeat like clockwork, the Sun marks the walls and makes sundials out of everything. Safouane Ben Slama and Samar Hejazi are both attuned to the movement of light and the passing of time. Inescapable and unclassifiable, attempts to control or capture it fall short. Accepting this inevitability is to embrace transformation and change, and to resist.

Hejazi connects with her Palestinian ancestry through traditional textile craft practices. Her previous series of works questioned the remnants of colonial ideologies in contemporary society through finely-sewn embroidery. In the exhibition at Cassandra Cassandra, Hejazi’s method of exploring these motifs shifts from the usage of thin and loose threads to larger and more robust ropes in macramé knots. Developed in the late middle ages by Arab weavers, macramé was used to produce elaborate ornamentation for functional objects such as shawls, towels, knife handles, and parts of ships. Hejazi’s use of this knotting technique results in large scale works, far from fragile, and proudly present.

Reifications (2021) was inspired by Benedict Anderson’s Imagined Communities (1983) in which he analyses the concept of nationalism through three institutions of power (census, map, and museum). His text argues that the nation is an abstract thought, an imagined community. Hejazi’s installation manipulates motifs as a metaphor for methods of navigating structures of power. Resisting containment, the motifs create abstractions, blurring boundaries and challenging the shapes they are forced into. The pile of rope and fibres on the ground represents the infinite possibilities in which it can be grouped and molded. Reifications resists oppressive colonial impulses of categorization and classification by embodying an ever-changing state. It explores whether freedom from this paradigm lies in the acceptance of the abstract qualities of existence.

In continuity with his previous works, Ben Slama is interested in moments of passage. His series of photographs La Dernière Heure (The Last Hour) were taken at dusk, mainly in the suburbs of Paris during the artist’s daily sessions of “conscious wandering” in a time of personal upheaval. Capturing sunsets, the artist sets himself to the rhythm of the elements in order to find his mooring through an everyday routine.

With La Dernière Heure, Ben Slama is sensitive to the experience of time. A romantic cliché, the representation of this moment that marks the end of the day is among the most hackneyed. The apparent banality of the chosen theme consists of a quasi-ritualized approach, which intends to seize the moment of change when the day falls and night appears. During this interval a set of atmospheric factors modify the decor and create a grandiose spectacle. The colours are nuanced, offering a variety of gradations, and the sky occupies a central, sovereign place. But the foreground of these photographs is often the direct environment, whether natural or urban, in which the effects of ongoing transformation are perceptible. In relation to the cosmos, the observation of which allows him to formulate reflections on the world and being, Ben Slama grants great importance to the coordinates of human existence. A universal backdrop, the sky appears as a common denominator to all people. The relationship of the individual to the collective is manifested through a shared gaze. To watch a sunset is to experience the phenomenology of time. Maintained as an image, the photograph fixes a moment without revealing that what has appeared has subsequently receded. When it is over, what saves us is the assurance that tomorrow it will start again. La Dernière Heure is a promise, that of the day that will return.

Samar Hejazi is a visual artist of Palestinian descent raised in diverse communities in the Middle East and North America. Samar questions ideas of self-identification, social construction, ethnology, and intellectual traditions. These ideas are engaged in her process and development of diverse materials and forms.

Hejazi holds a BFA in New Media from Ryerson University, Toronto. She has attended residencies at the Arquetopia Foundation, Mexico and Peru. She attended the Takt Art Residency, Berlin in 2016, and a studio residency at the Museum of Contemporary Art, Toronto, in 2019, which concluded in a group show. Most recently Hejazi was invited to take part in the international mentorship program at the Arquetopia Foundation. She has exhibited nationally and internationally at the Possum Gallery, Berlin, and Decentered Gallery, Puebla, Mexico. She has an upcoming exhibition at Warehouse 421 in Abu Dhabi in 2021.

Born in 1987 in Issy-les-Moulineaux, France, Safouane Ben Slama is a French-Tunisian artist living and working in Paris. Ben Slama graduated from Paris-I Panthéon-Sorbonne in philosophy and curatorial studies. After a theoretical curriculum, he dove into image creation. His work addresses notions of the in-between, the threshold, and the limit. In the series he shot in the US, Palestine, Jordan, Cuba, North Africa and the Paris suburbs, he explores spaces that interrogate the ideas of sidelines and territory, unveiling the marks and gestures of their occupiers as they come together.

Ben Slama has exhibited extensively in Paris, France and its surroundings at Mairie de Paris, Le Bal, Le Doc in Paris and at Galerie éphémère in Montreuil. He participated in Paris Photo, the 60th Salon de Montrouge and in the 9th International Biennale of Design Saint-Étienne at the Musée d’Art et d’Industrie de Saint-Étienne. In 2020, he had his first solo show at La Boite un lieu d’art contemporain in Tunis, Tunisia. Ben Slama has an upcoming solo show in 2022 at CAC Brétigny where he is currently in residence.