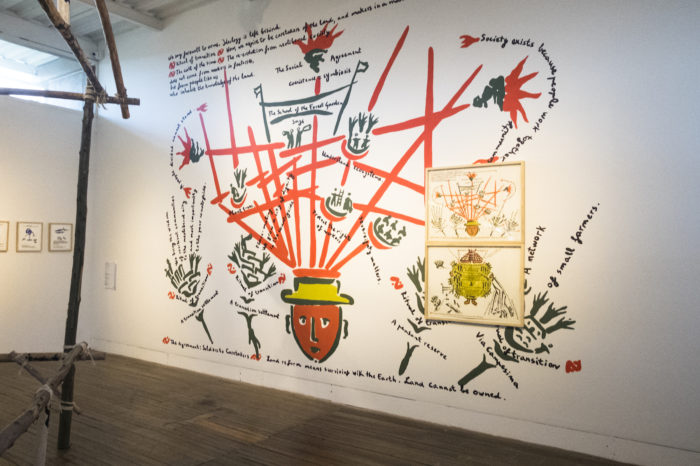 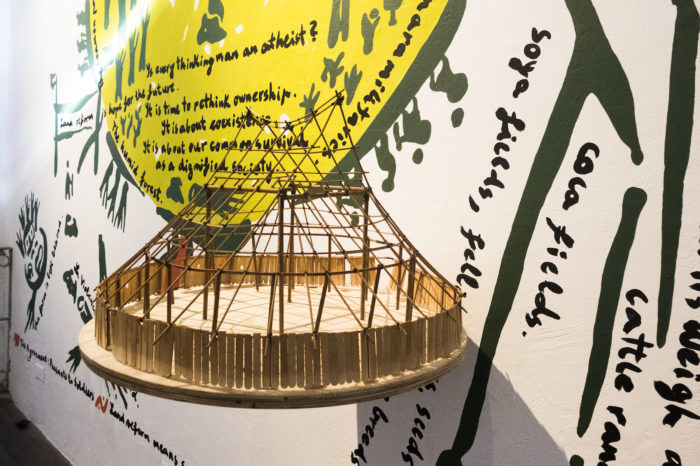 Marjetica Potrč (Ljubljana, Slovenia, 1953) was trained as an architect, and it is precisely through this discipline—where his formal, technical, and sociological concerns come together- that she approaches art practice. Her works invariably emerges from observing the building practices of specific places, and from how these practices, often of an idiosyncratic nature, respond to social relations determined by a particular culture and political conditions. Where the rational eye of the architect or the urbanist can only see chaos, Potrč identifies an alternative order -not less logic than the rational model and rather more appropriate to specific circumstances- and proposes a theoretical framework to inscribe it, often taking the shape of a manifesto. For example, when invited to the Sao Paulo Biennial, Potrč analyzed the isolated communities from the Amazon and proposed the Florestanía drawing series (presented in FLORA in 2014). Florestanía is a neologism that stands for “jungle citizenship”;  Potrč uses it to position the value of indigenous knowledge and that of the rubber tappers. The peoples who live in the jungles know first hand the vital need to maintain a sustainable coexistence with nature, as well as the positive value of relative isolation, made possible by physical distance and technological connectivity, conditions that allow the peripheries to communicate with centers when required -but on their own terms.

In September 2016, Marjetica Potrč did a residency in Honda, a Colombian city established as a river port during colonial times, and that currently survives in a situation of economic precarity and social tensions. The political context of her visit was equally challenging: it was a few days away from the plebiscite about the agreements made in Havana between the Colombian government and the FARC guerrilla, and the country was filled with an extreme polarization between ratifying or not what was agreed on the negotiation table. Ultimately, and for diverse reasons (such as a relative overconfidence from the government, an erosion of the media coverage of the process, misinformation, a targeted propaganda campaign designed to provoke indignation, and the fatalism of a majority disenchanted with the political class) the “no” won with a narrow margin. A country that achieved a peace deal after half a century of armed conflict inexplicably disavowed the agreement. This exhibition, titled Acuerdo Social [Social Agreement], is composed of two series of drawings and two wooden constructions. The diptych from which the exhibition takes its name has two parts, amplified to mural size. In the lower part, the drawing El acuerdo: de campesinos a soldados [The agreement, from farmers to soldiers], represents the past and shows a body that has spent half a century in the jungle, sheltered by the roof of a maloca, which for the cosmogonies of many peoples represents the vault of the world that keeps the ancestral knowledge. The upper part, De soldados a guardabosques (From soldiers to forest rangers), represents the future: a former guerrilla member carrying a basket in his head, symbolizing a future coexistence, a place where we will all fit.

The nine drawing series titled La lucha por la justicia natural (The struggle for natural justice), from 2017, is an account of the attempts of humanity for taming the natural world, and proposes a pathway for a society that understands nature as a living being and a subject of rights, in order to develop legal tools to protect it.

Finally, the two wooden structures present the house as a social metaphor. The larger one, an elevated structure supported by wooden logs, presents inscriptions with the diverse roles that we would play in the construction of a more inclusive society. The other one is a model* of a maloca from the Yucuna Matapí, an Amazonic community that withstood the violence of the Rubber boom at the end of the 19th century first, and then the internal armed conflict of Colombia. For the Yucuna Matapí, as for many Amazonian communities, the maloca is the universal mother, the representation of the universe, the place where all the rituals related to the origin of the world are staged.Potrč incorporates it into the exhibition to present an architecture of union and coexistence, a living example for a society where architecture is often an element of segregation, division, and stratification.

For Colombian society, tired, polarized and disenchanted, oppositions are easy: yes or no, for or against. But nothing is ever this simple: to be in favor of the agreement does not mean to be also in favor of the guerrilla (nor the current government, its adversary in the negotiating table), but rather to be in favor of a negotiated solution to the armed conflict. An agreement with a guerrilla group that could never be military defeated, but which couldn’t achieve social and political legitimacy either, that claimed to represent the interests of the people, but which ultimately perpetuated the “state of subversion” as a way of life, and as an end in itself. But every negotiation has its costs: better land redistribution, access to political participation, an acknowledgment of the victims…nothing different to what should be the norm in a democratic society that strives to a minimum of social justice. This is what we must understand to turn the page and move on.

As it has been pointed out by many analysts, the peace agreement that was reached exactly a year ago is a historic opportunity to build a better society. But while it must be articulated in the political realm, a cultural change is just as essential. This agreement must be above all a mutual understanding between citizens (and especially the ones living in cities, who didn’t experience the most brutal aspects of the war in their body). Paradoxically, it was the florestanos who voted to ratify the agreement by a great majority.

Should Colombia have mandatory military service for youth from all social classes, the war would have been over long ago. The title of a song from the seventies “if the war is good business, invest your children” never went beyond irony, as the ones who profited the most from the war (who were also the strongest opposition to a negotiated solution) never had to endure the war.

As Potrč points out, from the gaze of an external spectator, it is essential to integrate the ones who were always on the other side, and also take advantage of all the knowledge they developed by living their entire life in the jungle. There is a proposal written in her drawings: “we say farewell to arms – we leave ideology behind (…) now we aspire to be guardians of the land, as well as makers in a maker society (…) the re-evolution of the neoliberal society does not come from the workers from the factories, but from people like us, who dwell on the wisdom of our territory (…) It is time to rethink private property. It is about coexistence. It is about our survival as a dignified society”.

*The model from the Yucuna Matapí maloca was lent to this exhibition by Tropenbos, a non-profit organization devoted to the protection of tropical rainforests and the cultural practices that take place in those territories.