In spite of everything. M68: Ciudadanías en Movimiento Program

Our existence takes place in a complex web of power relations, […] memory is a battleground.
Mónica Mayer [1]

I wake up, it is October 2nd, 2018 and with a hangover, I remember that fifty years have passed since the events in the Plaza de las Tres Culturas; fifty years since the 1968 student movement. The question about the event is inevitable, and they had warned us months before: 1968 was a year rated paradigmatic whereby the concepts of order, peace and progress meant modernity for some; and control and repression for others. The armed conflicts, racial and gender inequality, as well as the economic instability, generated a climate of discontent in different latitudes that set the tone for a whole generation of youths to occupy the streets—placing the body in the public space—with the intention of initiating dialogues with the authority in pursuit of so-called democracy. It would seem that the protest functioned then as the basic requirement for resistance, but also disputed the limits of the repression—if it has limits.

In the context of the 50th anniversary of the 1968 student movement in Mexico, the Universidad Nacional Autónoma de México (UNAM) decided to launch an ambitious program that comprised of more than 100 short-term cultural activities with the aim of commemorating the events that took place in the country over five decades ago, the same that also triggered a series of social, political and cultural mobilizations in the years that followed. In this way, during the year, different offices affiliated with the university opened the program M68: Ciudadanías en Movimiento, consisting of multiple artistic exhibitions, concerts, performances, film projections, book presentations, installations, a few discussions, and choreographic pieces, as well as the launch of a digital archival framework.

To unify the numerous mobilizations, as well as the struggles of those that brought them about would entail presenting a holistic student movement that perhaps never existed. It seems to me that the range of activities included within the program gives an account of this since it gathers research that addresses the distinctive features of the movement in different formats. The scope of the present review limits itself, however, to exhibitions that have taken place, within the framework of this project, in the Centro Cultural Universitario Tlatelolco (CCUT), the Museo Universitario Arte Contemporáneo (MUAC), and the Museo Universitario del Chopo, museums located in Mexico City. 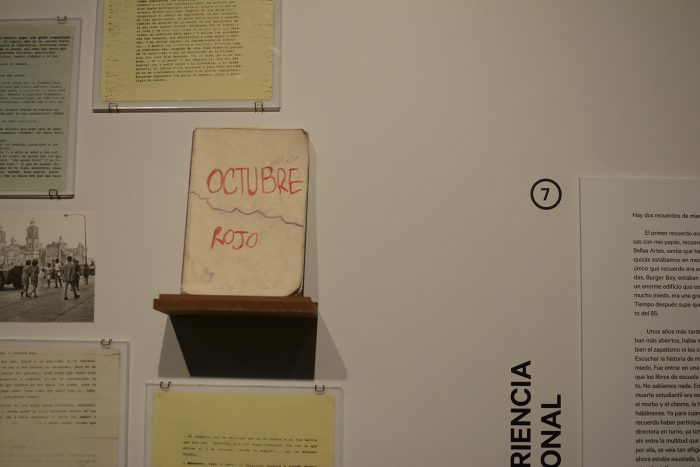 It is October 1st, 2018. Whilst a powerful wind takes the Plaza de las Tres Culturas, the opening speeches of the Monumento la ausencia are being pronounced in the center of the CCUT courtyard. The anti-monumental intervention, designed by the Israeli artist Yael Bartana, seeks precisely to commemorate the victims of repression from the movement. The recent concrete slab constructed, whose individual impressions were made by survivors of the killing, was presented as a gesture of resolution and symbolic reparation of the damages. Moments later, in the same area, the digital archive was launched: a free admission platform that compiles documents from around 30 public and private archives about the diverse social mobilizations that have taken place since 1968 up until the present day. Such an archive serves as an essential part of the Memorial del 68 and Museo de los Movimientos Sociales, a permanent exhibition in the CCUT, whose aim is to update and renew the memorial—inaugurated by the same institution in October 2007—, through new critical perspectives in terms of research and curatorship, as well as the assistance of digital devices regarding production and mediation in order to promote other readings in relation to the social mobilizations that have taken place since then.

To carry out a project on such a scale—the reconfiguration of a memorial and its rethinking as a museum of social movements in Mexico, combined with the display of a meta-archive—is a complicated task. The conspiratorial research [2] that supports it indicates the work of many voices in dialogue, willing to look with different eyes at the recent years events. It is not easy to put such content in the museum: however, if the network of signifiers intends to be critical, it becomes complicated. Neither is it, to revisit the archives and seek to trigger, through that which they protect, the representation of the unrepresentable. 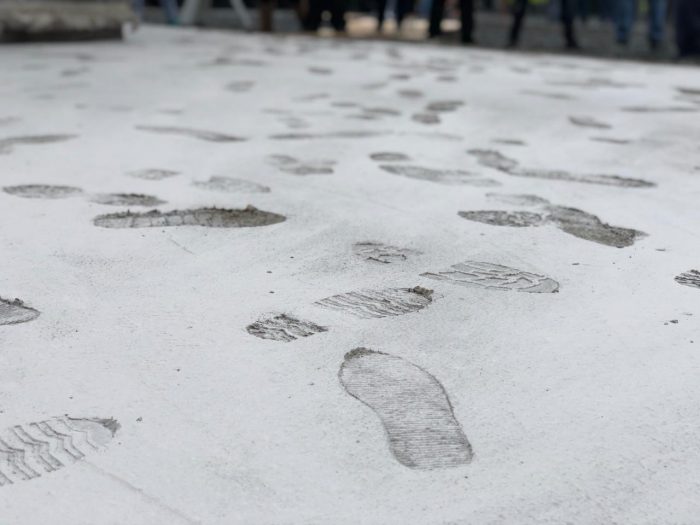 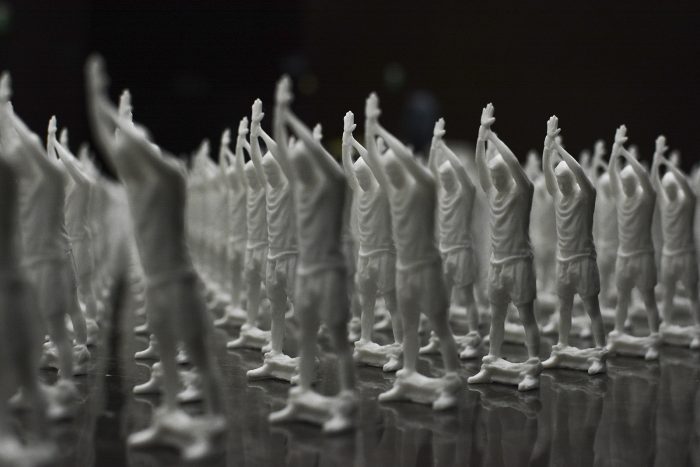 With that in mind, the exhibitions 1968/3 = Adorno + Siqueiros + Márquez in the CCUT and Gráfica del 68 in the MUAC are important, since they broaden the narrative scope of the student movement through short stories in which the position of the documents eliminates the static character that its format could bring with them, generating, through testimonies, an accompaniment that forms affection in relation to the events. Hand in hand with that, the exhibitions Alcira Soust Scaffo, Escribir poesía, ¿vivir dónde? in the MUAC,  as well as Las superocheras in the Chopo, do not only take a chance on approaching the intersections with other artistic practices within the vertiginous context, but also they give an account of the different imaginaries, poetics and emotions that came about: whilst the first compiles documents of different formats to specify the activism of the poet—as well as the poetry of their activism—and its power; the second exhibition unfolds an array of moving images superimposed through visual shots playing around within a mind-boggling dark room—that call attention to various critical positions of women facing different types of oppression. Through these exhibitions, the artistic object is revealed and distorted, to the disobedient object and document to also act as political devices.

What happened after? M68 doesn’t stop wondering about the repercussions of the student movement in the artistic production of the following years, the exhibitions Grupo Mira. Una contrahistoria de los setenta en México and Un arte sin tutela: Salón Independiente en México, 1968-1971 in the MUAC, point to the echoes of the movement through a historical revision of the 1970s and how it reconfigured the ways of producing and circulating different contested artistic protests. #NoMeCansaré, Estética y política en México, 2012-2018, in this same exhibition space, continues the historical route until today, practicing the multiplicity that the social mobilizations take in the present day and their interventions with the artistic activist practices—, whilst Desaparecidos in the CCUT, imagines a number of absent people exploded from 1968—but that runs into the present day—, which through an exchange and play of the fetish, gives the spectator the possibility of questioning the way in which official history is narrated and in this way, what about our memory could mean something today, wallpapering the marble wall that celebrates the creation of such a building under the mandate of Díaz Ordaz, the president in turn who ordered the Tlatelolco Massacre. In the same way, the framework of the project also points to a time preceding time, as happens in Operación peine y tijera. Los largos años sesenta en la Ciudad de México; which allows a glimpse at the structures that sought to forge a fictionized modernity in the country since the end of the 1950s, at the same time that visual and material culture comments on the era that until the 1970s reconfigured the way in which distinct ideologies could converge in the same context. 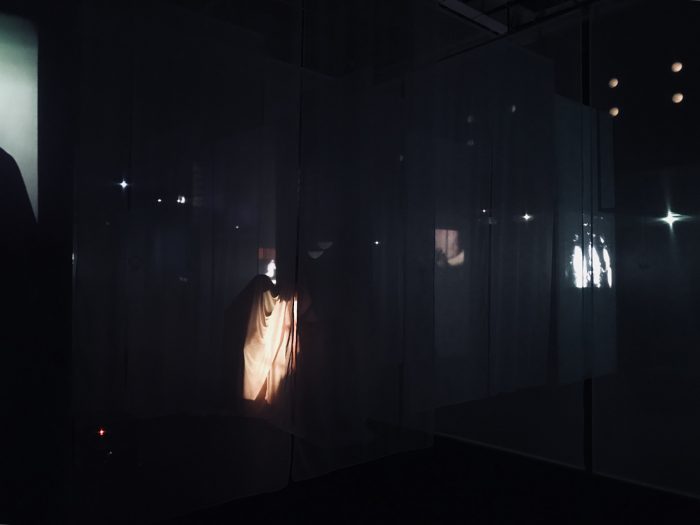 Just as the generations after 1968 questioned the power exercised by the museum space as an institution that legitimatizes discourses and artistic practices, the question about the relevance of archival exhibitions suddenly appears in the forefront. If something corresponds to us, it is precisely to generate a continued questioning of the institutions, of that which visibilizes and through what devices they carry it out. Above all, we find ourselves in front of documents that account for a distinct time and space, which find themselves now with ours. In that crazy time, how can we show these types of images and generate shifting affections between them and who looks at them, without translating or reducing their discursive powers? How can we represent the violence without trivializing the horror that it brings about? To think and work from and with the archive is violent. Its instituting order for protecting this and not that, combined with museum politics for showing certain images, forces artists to activate the events through a reasoning of the images and with that to find the conditions for a critical and conclusive experience in the present. M68 considers a reconstruction of the history, and it passes the impossibility of such a task, outlining a program that points to distinct alternative narratives, going back to other times through multiple images.

Nevertheless, it is important to think of the discourse under which they have preserved these activities.  In the game between the private and the public, under which the liminal character of the archive is used, the terms to rescue, to commemorate, to renovate, outlined by the project, tied to the proclamation of a heritage of terror, seems to be an appropriation that finishes by institutionalizing the student movement of 1968, inserting a sacred aura around itself. The question is not if the damages can be repaired, but rather how to intend to repair them? If history can reconstruct itself, and if we can think about the archive critically in a way that affection becomes a strategy to mediate between spectator and image, why not insist in those ghosts that allow, in the face of oblivion, to bring up to date the event in a more effective way?

I wake up, it’s October 2nd, 2018 and with a hangover, I remember that fifty years have passed since the events in the Plaza de las Tres Culturas; fifty years since the 1968 student movement. It is necessary to generate new dynamics of accessing the documents since it is through this that we can devise the spaces that occupy memory. It is a challenge, still today, to place images that account for the participation of women within the movements; as well as playing with the monumental character of images, that while they are effective, I ask myself to what extent do they operate as monoliths. To spark off in those that look at the documents the possibility of acting, makes sense in the face of the times in which we now place ourselves: whereby the signs of the past are so prevailing, whereby the ideas of democracy and progress are increasingly outdated, and whereby new ways of organization and mutual understanding are essential.

Ana Gabriela García is an art historian. Currently, she is Assistant Editor in Terremoto. She lives and works in Mexico City.