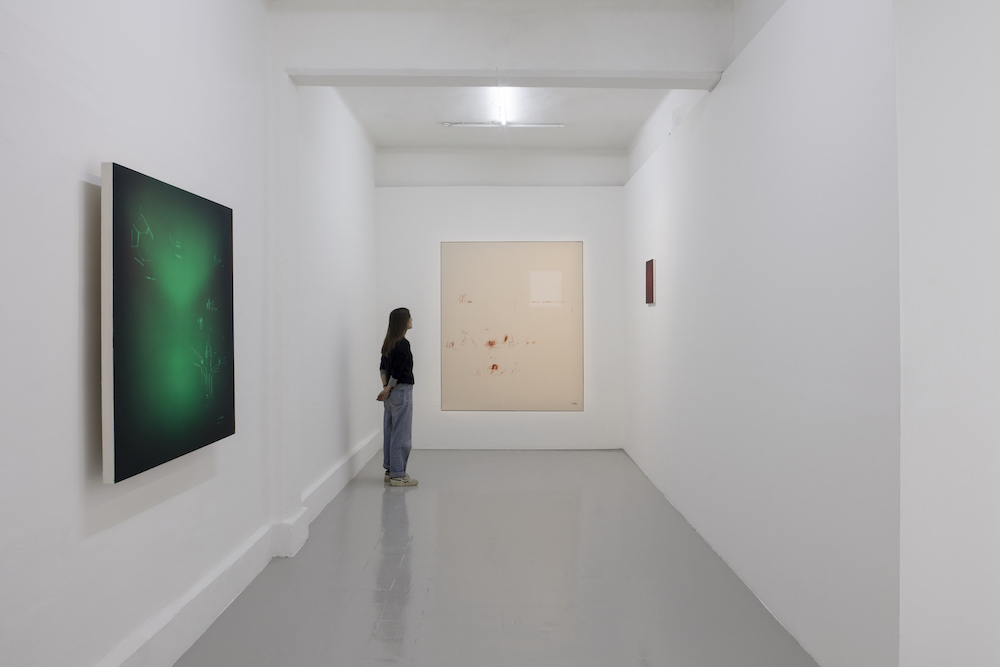 And when thy heart began to beat,

What dread hand and what dread feet?

Perhaps the tradition of iconographic analysis focusing only on forms, motifs, and themes has led us to believe that a painting is an object: a unity. As if the sum of the parts gave us the whole. The confusion of its supposedly singular character is also the effect of thinking of it as an object stretched by a frame: you take in your hands all of the painting, as opposed to a color, a gesture, or a rhythm. But no! A painting is never just a subject matter, a description, or a commodity. To say painting is to say not-everything, enigma, zone of indeterminacy, enunciation without a fixed statement, contour, and not always form or figure. The noun is, rather, porous and contains multitudes. What happens in there is linked to what happens to us outside: on this path, both the painting and a span of time are constituted.

Drawing the Boundaries of a Fire

Jerónimo Rüedi presents a dozen paintings that open up language using a subtle edge, summoning the body, and overflowing with thought. Let’s go by parts, since in order to see the flows, looking at the paintings would be sufficient.

In terms of language, each work presents a clear and premeditated statement that makes both the form and the word vibrate just as the pictorial line crosses the canvas without indulging one or the other. We intuit linguistic and visual signs, but they’re not there. What the artist offers is a damaged system—in relation to the tradition of the modern grid, obsessional neurosis, and ego composition—with unfinished functions that operate as critiques of both word and form.

The paintings do not indulge viewers with rational arguments or thoughtful optical narratives—with logical clarity and defined form—but rather open up possibilities of transmitting a meaning that is updated with each look/reading: that is, one that ends up being completed using the viewers’ imaginary referents. Although this characteristic is present in the act of observation itself, in these paintings Rüedi interrupts any conclusion or verification of hypotheses by means of abstraction, making the sign/form an impossible in terms of meaning. There is no icon or symbol, but rather a tracing that in its indeterminacy abandons the desire to dominate in order to offer itself as a shared and always-wandering path: when someone says, “I know what that is!” that then turns into something else. So, what is it that we recognize? I would go as far as to say that it’s the encounter itself: the side-by-side which in its relationship produces both a scene and an intermission.

In order to break with the figure of the painter as a solitary entity, inventing what’s new from the solitude of their studio, showing little interest in the outside world, I would like to share that among Rüedi’s many practices, repetition—something associated with personal ritual—is important. This repetition is composed of a body experiencing meditation: there are things that move and exit, so that others can enter. This flow of detachment is important insofar as it has a correlate in pictorial production. Rüedi forgoes composing: he does not want to form an image or to be indebted to a distant inheritance. His self-imposed rule is to stop painting once thought arrives and blurs the line. If the composition appears, it is not as an enlargement and refinement of a sketch, but as an effect of the practice of repetition, one in which his body confronts the painting in order to let it pass, to let it enter and exit.

The consequence is an accumulation of work in which the body’s rhythm takes precedence over the eye’s planning. In other words, pupils sprout from pours so that the eyes can close and the skin can paint signifiers without meaning: concatenations, maps, and spells. Spells in the sense of moving something away just as something else is approaching: letting go and stopping. A painter who, at times, closes his eyes because he trusts his body.

The pictochoreographic essay, accessible to us via the canvas, never reaches the same port; there is no formula or efficiency. We can confirm it in the differences between each picture. Although the ritual is premeditated, its imprints are spontaneous and dynamic. The challenge is to stop before the temptation to compose, making a form. Meddling in the power of not-doing—I would prefer not to—allows the paintings to display their elements and spaces from the perspective of a wager that is closer to tarot, fortune telling, and movement than it is to a bureaucracy of forms: a bureaucracy, that is, in which order is equivalent to prestige and technique to control.

The temptation to look at the paintings as though they were an essay…Reason wants to put things in order, to produce understandings of those layers of paint sanded down and traced with patience, of the glazes attenuating a ghostly sign, a sign that insists before an eye surrendering to the pleasures of unclarity. In the ensemble, it seeks out norms and standardizations. It wants to know something, to communicate it, to make the argument a power.

Since the birth of the public sphere at the end of the 18th century, rational argument has been in charge of granting the illusions of equality and subjectivity. Rüedi rejects modernity by resisting the thought that thinks itself via a grammatical, syntactic, or logical reduction. There is no meaning, but there is thought. Not the instrumental thought of the patriarch who presents himself as a comrade in order to dictate a sentence disguised as reason, but rather a rhythmic thought that finds in repetitions the possibility of passing from one side to another. There is no genius, but instead joint breathing.

Rhythm, as Deleuze and Guattari tell us in “Of the Refrain,” is always critical, while meter is always dogmatic. There is rhythm whenever there is a transcoded passage from one milieu to another, a communication of milieus, coordination between heterogeneous space-times. We see it again and again in interspecies relationships: the bee pollinating the flower, the tick waiting for a change in temperature in order to drop onto others’ skin, the body embracing another body—right there is rhythmic thought. Transcoding: the manner in which one milieu serves as the basis for another, or conversely is established atop another milieu, dissipates in it or is constituted in it, prepared to repeat itself and, therefore, to introduce variation.1

Certain discourses still hide rhythmic thinking—which is never individual, but rather response-able, mobile, and compostable—and yet here, in these paintings, it takes place.