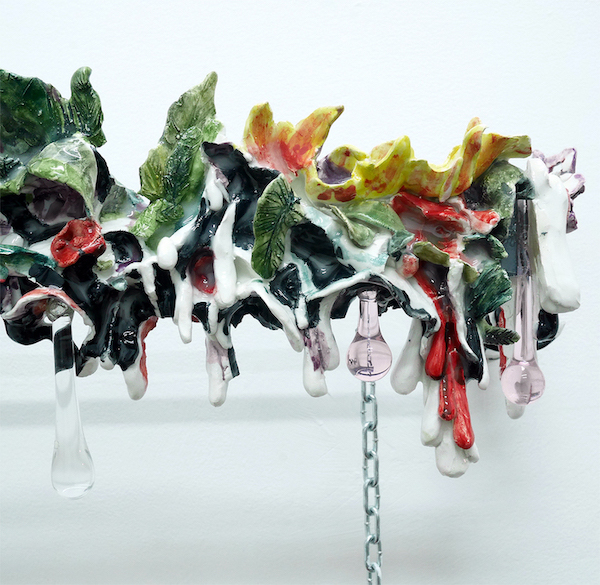 La clara luz del vacío que hay más allá [The Clear Light of the Void Beyond] is a journey through a multiverse. While the central piece of the exhibition is a painting on canvas that serves as an interdimensional portal, each piece reveals layers that in turn connect to another dimension, forming a contradictory discourse similar to the one we experience through memory. The desire to cling to what has already been, and at the same time the desire that the memory, being so fragile, would break and disappear forever with just a tiny movement; leaving us in a dispute that would trigger a return to the point of questioning who we are and where to go… Could it be that what we find most difficult to digest is what we find most difficult to let go of?

This feeling emerges when observing the set of pieces that make up the exhibition of visual artist Alejandro García Contreras. Both in its materiality, which becomes increasingly dense and heavy, and in its content. Each piece is a step prior to the next. And this can be appreciated in subtle and completely obvious ways, like a chain bridge. Going from the light, the fabric and the canvas, to the complementation with ceramic frames, to a hanging piece made almost entirely of ceramic, to a vase, Alejandro plays with the dimensionality of the painting, making it come out of its traditional format to achieve a scattering. Scattering of symbolisms, codes, dreams, deities, nature and color.

Having grown up in an environment so connected to nature, ancient cultures and the occult, due to an esoteric store his grandfather owned in Chiapas; as well as having flirted with different aspects of magic himself, the painter and sculptor’s work makes obvious his exploration of these themes, as well as myth, religion and eroticism. On the other hand, much of Alexander’s erotic, creative, intellectual and spiritual development was also through popular culture and comics, as the constant in his work Sailor Moon. The latter having marked his imaginary around sexual freedom and femininity as a path to divinity and the awakening of the unconscious. Alejandro’s work seeks to project messages that dwell within. And remember that art was once magical objects, representing life and death.

With the support of Colección Zarur, La clara luz del vacío que hay más allá can be visited until July 16 at Residencia 797.