From Missions to Mission-style to Mission-branded cubes: how Taco Bell architecture tells us the history of Southern California. 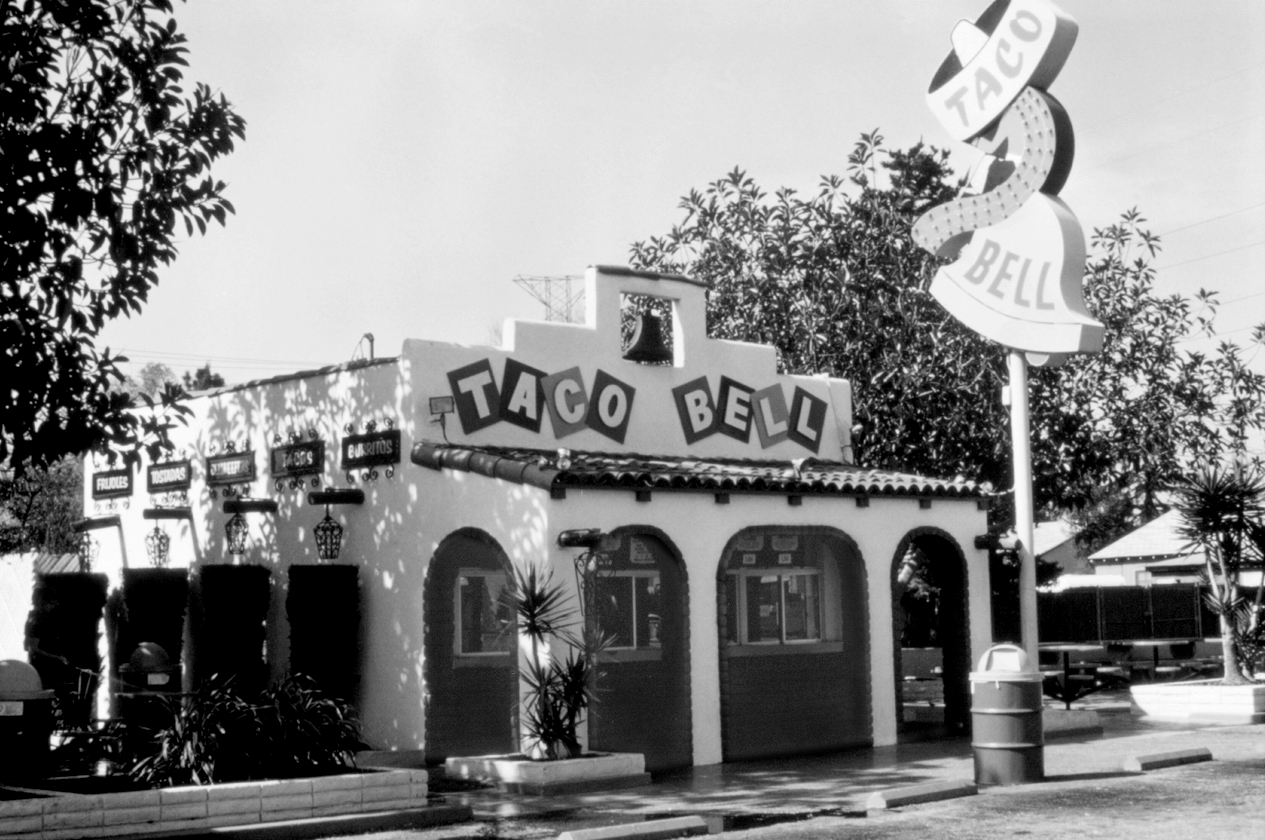 “You let the building be the sign” was architect Robert McKay’s promise. His 1962 roadside masterwork shot up at 7126 Firestone Boulevard in the southeastern L.A. County suburb of Downey. A collage of allusions to California’s twenty-one Franciscan missions, it featured: stucco painted beige to look like broad adobe walls; red clay tiles; exposed, ornamental wooden beams or vigas poking out below the roof’s edge; an outdoor corridor with three wide arches; and, set within the top of the facade, a bell, after the famous campanarios—the flat, and uniquely Californian treatments of belfries. At the time of construction, McKay and the building’s owner, entrepreneur Glen Bell, had plans to develop the adjacent lots into a strip mall version of downtown Los Angeles’s Olvera Street, a fantasy Mexican plaza imagined for pedestrian tourists. Unlike Olvera Street, this plaza would be oriented toward passing traffic.

Beginning in the 1920s and ’30s and extending through the post-war period, roadsides around the country filled with service stations, diners, and cafes that competed for a higher-speed audience than ever before. Fortunes were made and lost on grabbing their attention. An architecture of referential signage emerged, first on the East Coast as the bright orange roofs of Howard Johnson’s, then crossing the continent as coffee shops shaped like coffee pots, tamale stands shaped like tamales, and restaurants shaped like bowler hats, hot dogs, and Boston terriers. Robert Venturi, Denise Scott Brown, and Steve Izenour’s landmark architectural study Learning from Las Vegas named these “ducks”—after a duck-shaped building on Long Island, which sold duck eggs.[1] Along the roads connecting the distant real estate developments of Southern California, ducks proliferated.

The road was also a place to be themed, a California practice since at least 1904, when over 400 bells hanging on curved posts were installed along what would become Routes 101 and 82. The bells decorated the length of the supposed El Camino Real (The King’s Highway), re-branding the series of pathways linking all the state’s missions between San Diego and Sonoma as California’s colonial freeway. From 1769–1833, the missions represented land grabs and slavery. In the late 1880s, California’s self-evangelization gave them an image makeover, infusing their shared structural language—arches, clay tile roofs with projecting eaves, sandstone, adobe, and of course, bells—with the romance of travel and history.

In 1884, the Los Angeles Times hired Cincinnati journalist Charles Fletcher Lummis, whose penchant for myth and purple prose filled dispatches from the Southwest that satisfied an Anglo readership viewing Mexican and Native cultures as distant other. That same year, Helen Hunt Jackson published her novel Ramona about a Native American-Scottish orphan girl and the ostracization and racism she faced growing up in Southern California. Jackson hoped to use the novel to draw nationwide support for Native rights. Instead, her massive readership interpreted the book’s depictions of mission life as exotic and charming, and tourists came westward by rail to seek out the sundrenched ranchos they’d read about. With Lummis’s writing—like his book The Home of Ramona (1888)—and railroad-produced tabloids, Ramona-mania shifted mission-era architecture from a site-specific eighteenth and nineteenth-century building method to a nostalgia device. Mission style was made exportable, peppered around the state’s civic and domestic buildings in Mission Revival and later Spanish Colonial Revival trends. By the time Glen Bell was born in 1923, the mission was a decor that could easily laminate any location with its ambiance. Learning from Las Vegas calls this “decorated shed” architecture, where any building can be themed by ornamentation, independent of its original design.[2]

During the 1940s and ’50s atomic age, Googie-esque coffee shops blended architecture and logo into futuristic roadside ducks. From his own hamburger stand in San Bernardino, Bell watched up-close how McDonald’s Golden Arches took Googie strategy and combined it with a franchisable food factory. Looking for his own niche, Bell copied from a neighboring Mexican restaurant, adding tacos to his menu while removing ingredients too spicy for the mass and white customer base he sought to reach. Bell found traditional tacos too messy to be mechanized and adapted an existing method of lightly frying tortillas to make multiple pre-formed taco shells at one time. Borrowing from the Mc-Donald brothers, he built a taco-filling assembly line around racks of U-shaped hard shells and started the small chains Taco-Tia and El Taco.

The coincidence of Bell’s homophone name would eventually be made into both a brand, Taco Bell, and a visual motif. Despite serving dulled Mexican staples, Bell and McKay’s Downey Taco Bell would double down on the same historical revisionism unique to the region that spawned Hollywood. As used by the Franciscan missionaries, these bells—architectural crowns of each mission—sang their presence daily throughout the colonial regions as part of the church’s domination over indigenous people’s lives. Represented in Ramona-inspired movies and lyrics, the bells fueled saccharine imagery—“Ramona, I hear the mission bells above; Ramona, they’re ringing out our song of love”—motivated the Automobile Club of Southern California’s promotion of the El Camino Real as a road trip route, and gave Bell’s new venture its name.[3] 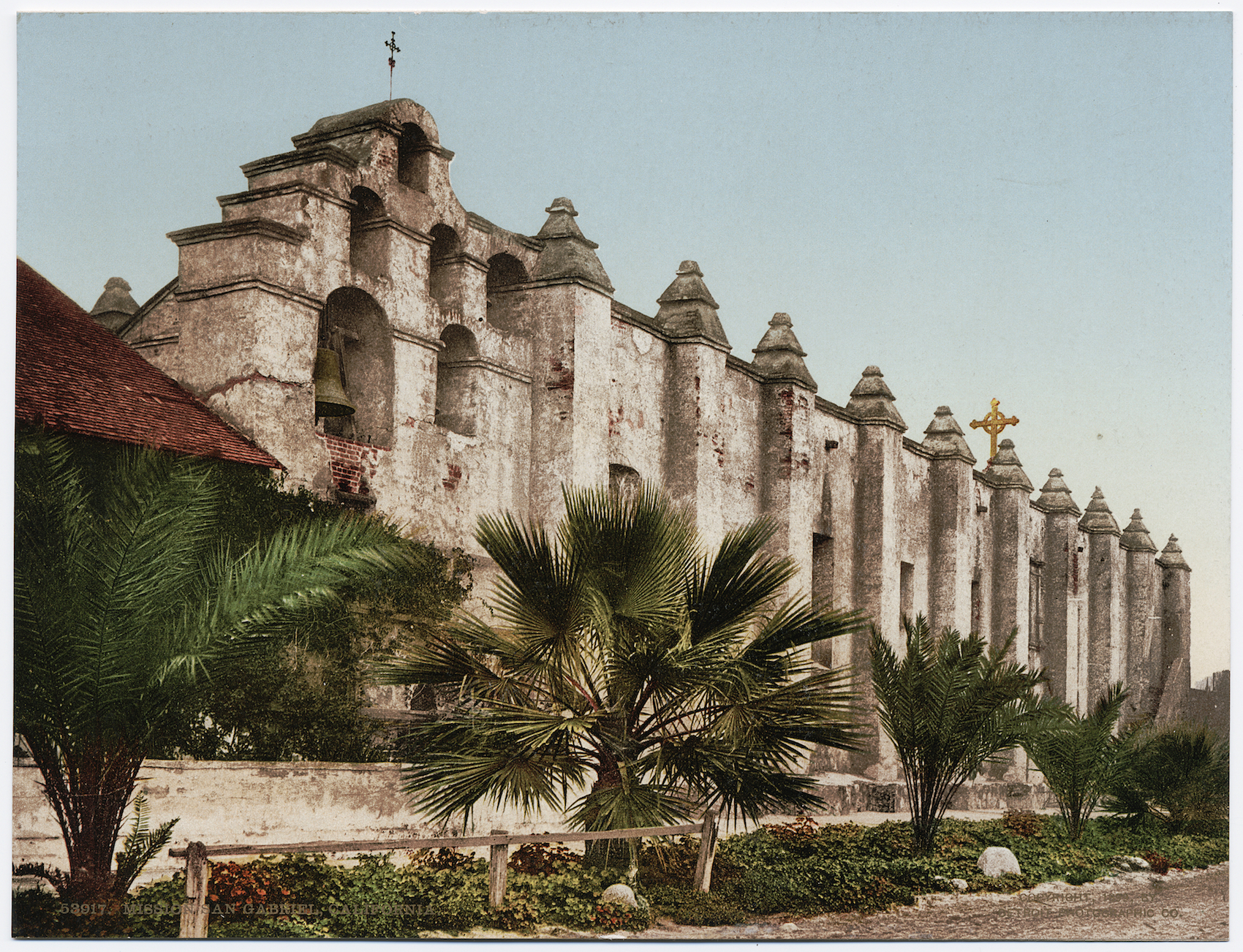 Glen Bell’s first franchise was LAPD Officer Kermitt Bekke, who opened the next Taco Bell in Torrance in 1964, soon after eating his first taco. One hundred mini missions sprang up throughout the western US in the three years that followed, with ribbon-cutting events that featured mariachis and Mexican folk dancers. Robert McKay called Taco Bells “architectural monuments” that were part of an “education process” in culture and cuisine. The company would never distinguish between its notion of “Mexican” and its mission referent, severing any lingering comprehension of the relation to Spanish colonialism in either Alta California territory or Mexico proper. Reading “Sí…Soon! another Taco Bell,” the signs at construction sites for new locations in the ’60s showed a sombrero-wearing, serape-draped caricature of a Mexican boy running with a wheelbarrow filled with a rendering of a Taco Bell building.

As freestanding structures, Taco Bells were primarily located on major thoroughfares in the suburbs. The brick buildings stayed committed to “duckness” through the 1970s, with pronounced mission style on the exteriors even as they were constructed in locations further and further from the El Camino Real. When Glen Bell sold all 868 locations to Pepsi Co. in 1978, the architecture began to feature prominently in TV commercials, opening and closing with shots of a model Taco Bell nearly identical to the original but set amid the rolling hills of Main Street USA. Slogans like “Now That’s a Fresh Idea,” “The Fresh Food Place,” “Deliciously Different” and “Make a Run for the Border” would pronounce the novelty of “Mexican” food. The menu would grow through the years to include gringo experiments like the Enchirito (c. 1970), the Bell Beefer (the mid-1970s), the Taco Salad (1984), Mexican Pizza (1988), the Cheesy Gordita Crunch (2000), and the Quesarito (2014).

As the roadside sign was supplanted by television advertising, Taco Bell architecture followed suit. In commercials, images of their buildings were abstracted and dropped into all types of settings, from Gotham City to the Arizona desert. Graphics of the arched facade were stripped down into a logo: a bell within a color-block arch. The logo commanded the interiors of each location, from adorning napkins and cups to posters and uniforms. Mission style as simulacra began to take over.

In the mid-1980s, Taco Bells switched to cheaper construction materials like wood, stucco, and sheetrock. Designs amplified a specific selection of architectural references: the arches stretched past the roof on all sides; clay tiles were mimicked with pre-formed cladding; archways became glazing, and glowing signage replaced the campanarios. Concurrently, many California towns and suburbs incorporated mission-style decorations into their official building codes, contributing Spanish-tiled Chevron stations and other decorated sheds to the overall landscape.

Growing to thousands of restaurants worldwide, Taco Bell reduced its branded architecture further. The bells and arches were powerful enough—in print, on video, or as audio through its “bong” sound, used since 1989—that planning a specific building to physically realize them became an unnecessary cost. Taco Bell opted to integrate these previously built forms into degrees of branding that could easily up-holster newer locations and designate any place as a link in the chain. Since the mid-1990s, new Taco Bell locations have been no more than stucco boxes with signage referencing an arch shape, fake bricks glued to the facade, and bell logos. After 1995, Taco Bell began to “co-brand” with other global chains Kentucky Fried Chicken and Pizza Hut, using only half of a stucco box.

Early Taco Bells are now curios of building typology. Most of the 1960s and ’70s buildings have become ruins of the first era of the Bell Empire, available for lease to new restaurants and other businesses taking advantage of heavily trafficked suburban streets. No place promotes the fact that it used to be a Taco Bell. Architectural details are sometimes renewed as “Mexican”—especially if housing a Mexican-themed restaurant—or become simply “Spanish style,” often times camouflaged or repressed with paint jobs, new signage, or a simple refusal to acknowledge the obvious.

Until 2015, the original 1962 Taco Bell in Downey operated for years as Seafood Raúl, an actual Mexican-style taco stand across the street from a newer, stucco box Taco Bell, which sits there still. When the owner opted to demolish Seafood Raúl, the Downey Conservancy announced that the building was “endangered” and proposed that it be relocated within the city for adaptive reuse as a tourist center. Capitalizing on the public’s instinct for historic preservation, Taco Bell mounted its own campaign to “#SaveNumeroUno” before buying the structure, replacing Raúl’s sign with a Taco Bell one, and trucking the monument through the night along the El Camino Real to the campus of their Irvine headquarters, roughly twenty miles north of the tourist site of Mission San Juan Capistrano.

Revaluing leftovers and selling them as vintage artifacts has remained lucrative ever since Lummis’s rose-colored writing about California’s missions. Akin to #SaveNumeroUno, LA artist Eric Wesley’s residency / gallery, The Bell (2016)—a repurposed early Taco Bell in the Illinois suburbs of St. Louis—brought the loft aesthetics and nostalgic tendencies that drive today’s urban gentrification processes out to the suburbs, a hybrid of white cube, roadside, and romantic projection. “Where customers once chomped on Chalupa Supremes in swivel chairs and vinyl-padded booths now sits a light-filled gallery space with white walls and wood floors,” writes Artsy.com in celebration of Wesley’s renewal of the Taco Bell’s “seedy, decayed version of suburban life.” 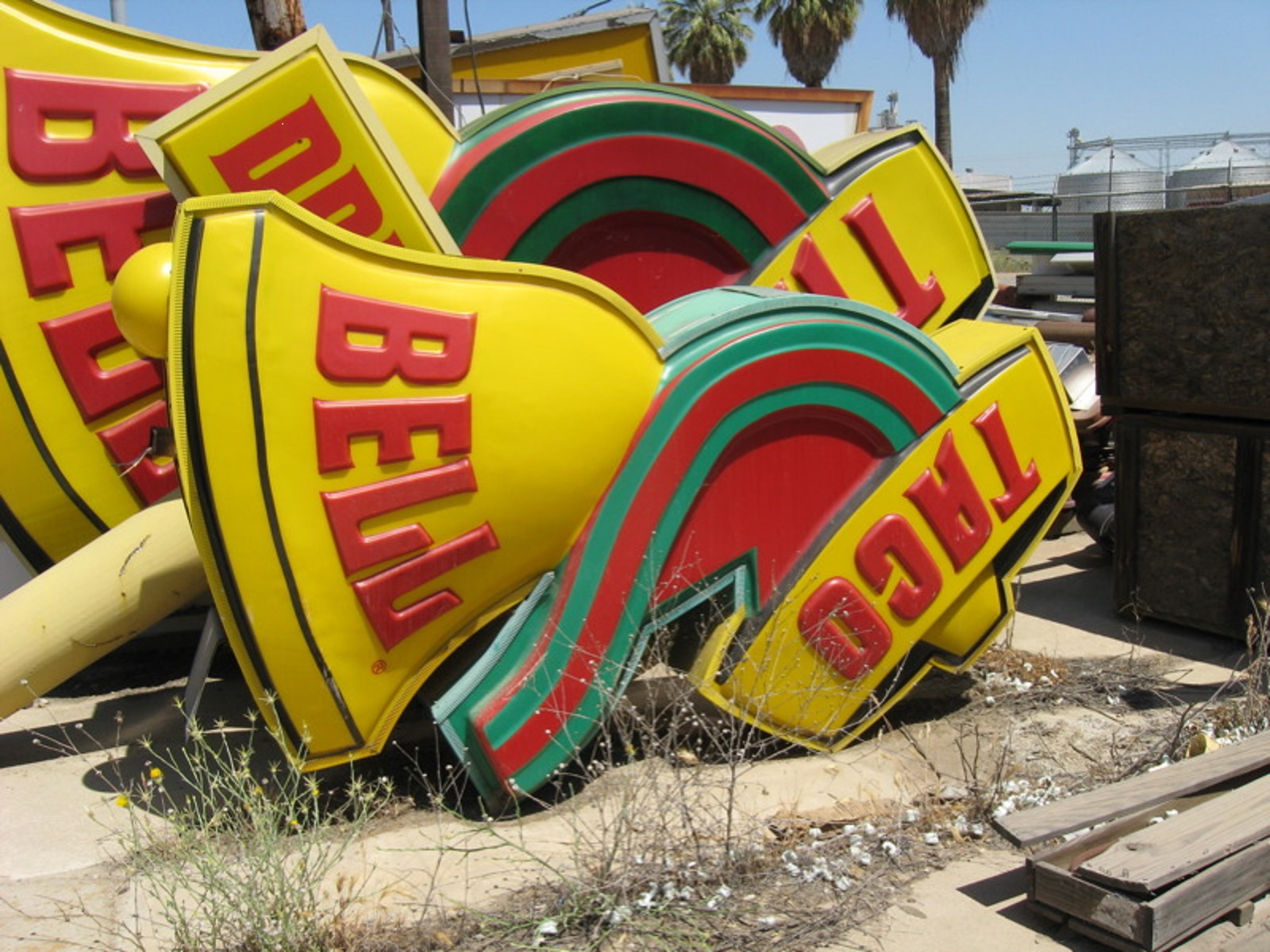 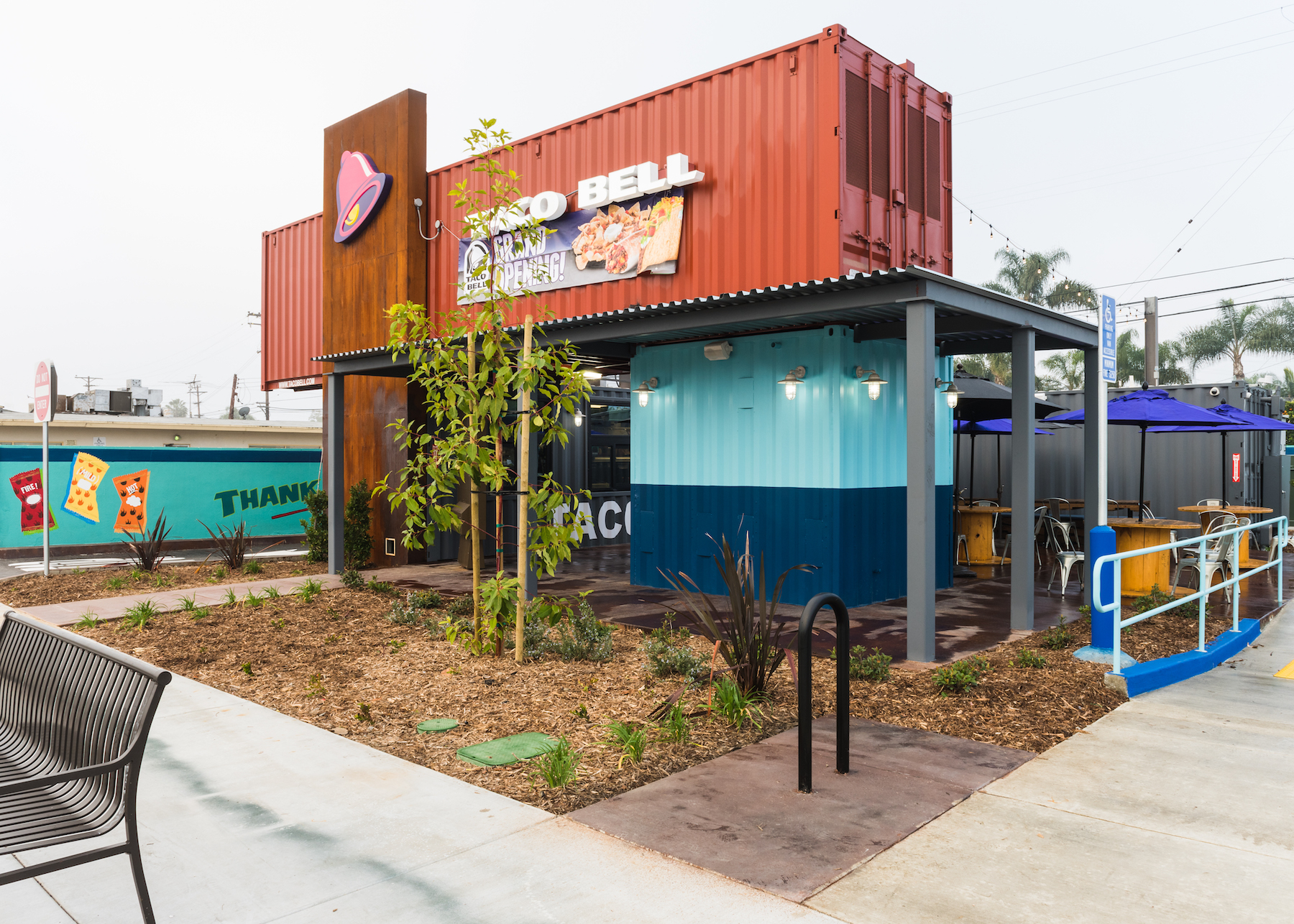 In 2016, Taco Bell revealed new building designs: glass boxes that can quickly sprout anywhere, with graphic ornamentation options called “modern explorer,” “California sol,” “heritage,” and “urban edge”—choices offered to potential franchisees as if on a menu. As McDonald’s and Taco Bell learned early on, the product of a franchising corporation isn’t the #4 combo special, but rather the usage rights to the brand name and logo. The success or failure of any restaurant is far less important to the company than its continued expansion. Ducks have given way to hermit crab shells, as individual locations can be inhabited and evacuated so long as the logo keeps moving from one home to another, multiplying and planting imperial flags along the way.

From art galleries to CrossFits to H&R Blocks, contemporary fast food franchise models have appealed to other businesses because they demonstrate the ability to decorate any shed and inexpensively impose themed architecture from the inside, using previous structures as host bodies. The 1993 film Demolition Man imagines the year 2032, when Taco Bell has triumphed in what the characters call the “Franchise Wars.” As the future cop Lieutenant Lenina Huxley informs the perplexed demolition man, “Now all restaurants are Taco Bell.”