Radical Women: Latin American Art, 1960-1985 is one of the major exhibitions to come out of Pacific Standard Time: Latin American & Latino Art in LA (LA/LA). Funded by the Getty Foundation [1] the third iteration of this regional program opened this September in over 70 museum institutions and countless galleries and performance spaces from San Diego to Santa Barbara. Its current presentation is dedicated to historical and thematic examinations of Southern California’s relationship with Latin American, Latinx, and Chicanx art and design histories.

Radical Women, co-curated by Andrea Giunta and Cecilia Fajardo-Hill, is one of many exhibitions to employ redefined understandings of female, feminist, queer, and other gender-nonconforming identities, breaking new ground for Latin America’s art histories, which have until now been largely unexplored in US museum institutions, with a few notable exceptions. [2] One could even argue that LA/LA is the first academic and cultural initiative of its scale to incorporate these alternate histories across so many institutions. Some other notable examples of this trend include: the retrospective Laura Aguilar: Show and Tell at the Vincent Price Art Museum, the first of its kind on the work of the photographer and influential figure in Southern California’s Chicanx, Latinx feminist, and queer communities; the first major retrospective of Brazilian artist Anna Maria Maiolino to be done in the United States, taking place at the MOCA Grand; and Axis Mundo: Queer Networks in Chicano L.A., a thematic exhibit organized by the ONE National Gay & Lesbian Archives at the USC Libraries, which is being held at the One Archive gallery in West Hollywood and at the MOCA Pacific Design Center. [3]

LA/LA has offered scholars of Latin American art histories unprecedented platforms to exhibit areas of their scholarship that represent lifelong professional and investigative pursuits. Additionally it has allowed another community of local professionals to turn for the first time to new subjects within Latin America’s vast and varied art histories, and examine the deep connection the region has had with California’s Latinx and Chicanx communities. As a native Angelino who left the United States some seven years ago for Santiago, Chile, and later Mexico City, the community LA/LA has prompted is nothing short of surreal. 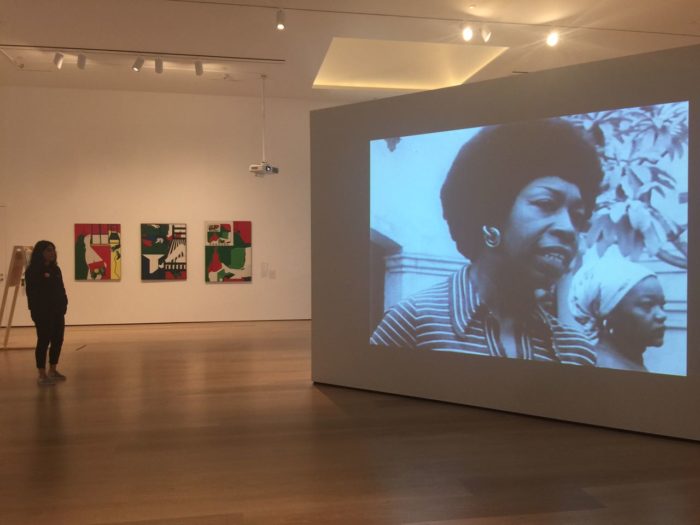 The initiative will undoubtedly uncover new territories through its myriad exhibits, tours, performances, talks, and publications.  It will be interesting to observe the effects of LA/LA in the face of the Trump administration’s explicit anti-immigrant and racist position, especially in the wake of the President’s recent Suspension of the Deferred Action for Childhood Arrivals (DACA). Among the multitude of expansive historical and thematic revisions, Radical Women stands out, offering the public unprecedented geographic, chronological, stylistic, and thematic landscapes. The 120 artists included in the show represent female and feminist driven practices within 14 countries in Latin America and the United States. To locate these near invisible histories, the curatorial team investigated an impressive range of public and private collections and archives throughout Latin America and abroad. [4]

As Fajardo-Hill and Giunta state in their joint introductory catalogue text, the focus of Radical Women is to reveal a body of work forgotten in Latin America’s cultural history, “providing it with the complex theoretical and critical framework that it deserves.” [5] The curation of the exhibit, from its general theoretical framework of  ‘the political body’, to the approach taken by the curators in the sectional divisions of that body in the show’s physical space–the curators took a different approach to their subject matter in the catalogue, organizing each artist’s work by country so as to make the resource as accessible as possible–intends to underline the subtlety and sophistication of the pioneering practices the show includes. The Argentinean and Venezuelan curators succeed here to widen the boundaries of female expression, through their investigative and curatorial methodology for exhibiting the range of practices in the show, and its many reconceptualized languages of radicality.

The curators use textual and museographical mechanisms to acknowledge the specificities of each artist’s social, political, stylistic, and thematic contexts, and create insightful connections within the show’s broader intersectional explorations of the body in a process of artistic rediscovery and transformation. 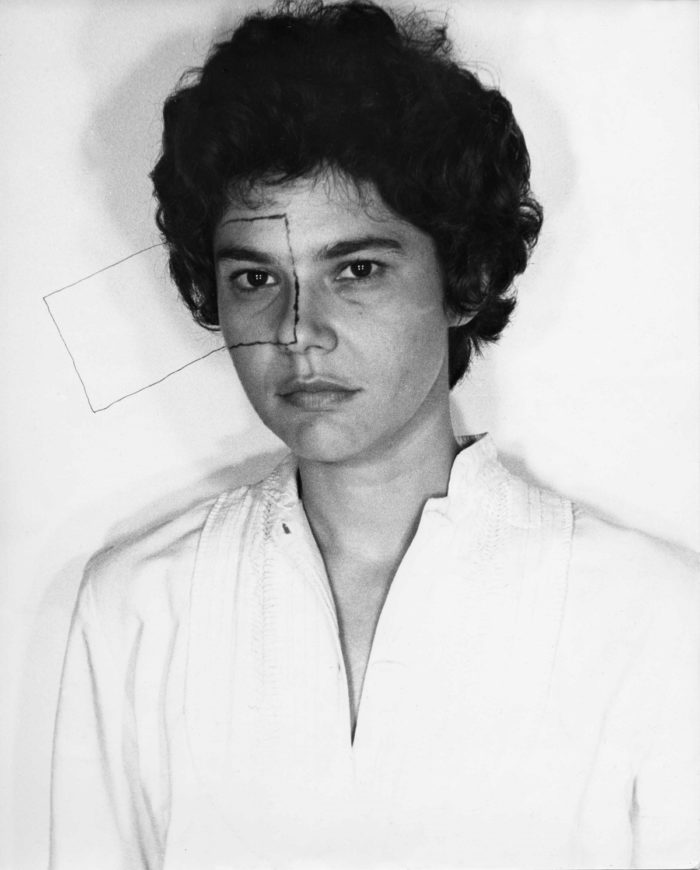 The almost overwhelming amount of painting, photography, print, sculpture, video, and archival material include some of Latin America’s most well known female artists, such as Marta Minujín (Argentina), Lygia Clark (Brazil), Damiel Eltit and Paz Errázuriz (Chile), Graciela Iturbide (Mexico), and Ana Mendieta (Cuba). However, within Radical Women’s redefined conceptual axes their works exist outside a framework for approaching Latin American conceptualism made popular in recent decades: “…heroic, political, and even militant, leaving little space for those forms of conceptualism and experimental art that embrace more subjective interjections and both broad and intimate personal and political struggles.” [7]  Instead the viewer is prompted to consider certain characteristics that define the radicality of each artist’s approach, whether it is an “intense research into subjectivity”, the “problematic status of women as biologically and culturally conditioned beings”, “the body and violence in a period of intense dictatorship and structures of oppression”, “language as a conceptual tool of resistance”, or “the reconceptualization of the female body in and of itself in relation to society”. [8]

Of the countless figures I encountered for the first time in Radical Women it is hard to single out any single artist, as each of the selected works are significant. A few of the many works that have stuck with me are Anna María Maiolino’s “Mapas mentais” (1971-76), Diana Dowek’s paintings “Paisaje con retrovisor II” (1975) and “Procedimiento” (1974), the caricatures of feminine virtue by Clemencia Lucena, and Lotty Rosenfeld’s video “Una milla de cruces sobre el pavimento” (1979).  No single work or artist is given priority over another, and the impact of each piece is felt in the dialogue created between works, within the greater collectivity of the show.

This gesture is simple and suggestive. It subverts the normative quality of the exhibit as academic text, and the hierarchy common in museum shows of the curator as expert and the work as object of study.  The curatorial voice highlights the power of each artist’s process, and the breadth of conceptual symbolic, and visual language. The space for communication across specific practices demonstrates the form of curatorial listening that defines Radical Women. In conversation with one another, the intellectual, emotional, and affective provocations of these radical women seeks to constitute a reparation, a curatorial moment of redemption.

The exhibition design functions around a graceful distribution of the works, as well as the subtle but consistent use of variety in color and material in their mounting and framing, set against modular mid-century-esque structures that invite the viewer to linger, but never deny her a panoramic view of the works in collectivity. The effect is reminiscent of domestic space, and the female histories it invokes. At every turn the curatorial hand complements the fearless confrontation of pictorial plane and the tenacity in subject matter that fills the museum galleries. As a result, the works in Radical Women defy not only the invisibility of female artists throughout region, but disrupt existing scholarly and curatorial narrations of late modern and early conceptual art practices across Latin America’s different avant-garde movements.

This conceptual approach to the latent histories revealed by the nearly ten years of research behind Radical Women, is subversive. The curators have organized the wealth of information in a manner that displaces canonical art historical categories and patriarchal characterizations of femininity and female driven art. One of the many examples of this is the way in which Giunta and Fajardo-Hill address the common misconception of female driven art as necessarily feminist.  The curators take care to subvert a characterization that plagues any curatorial endeavor that focuses solely on female artists, a phenomenon that narrows the perspective allowed for artists who use their own femininity as a driving creative force. In doing so, Giunta and Fajardo-Hill make a distinction between a specific political agenda –and an artwork geared towards the advancement of that agenda– and a greater body of work that takes up gendered histories as its focus. This work, the artists state, may align in retrospect with feminist ideals, but goes beyond the confines of any particular feminist movement, and can be situated within a greater panorama of artworks founded in a process of self-reflection and an inquiry into the systems that limit the politically or socially prescribed body. 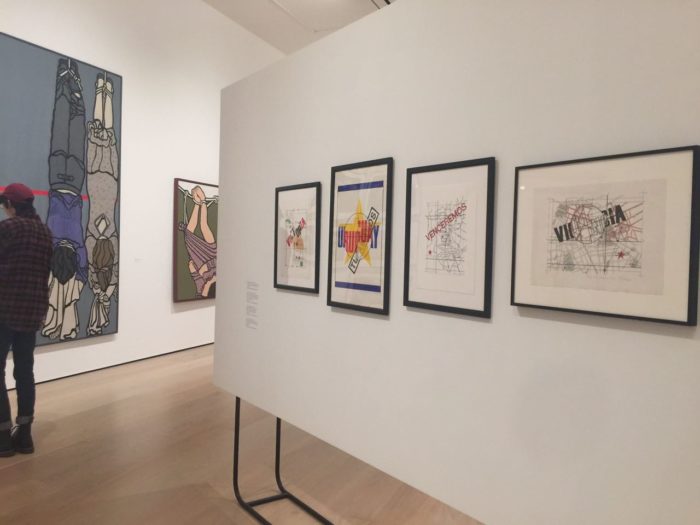 The exhibition catalogue is similarly impressive, although not bilingual, which is disappointing, as the practice of translation in the field of academic and critical texts between Latin America and the United States remains greatly lacking. The nearly 400-page anthology unites an unprecedented community of art historians, curators, and artists, with essays by the show’s two curators, as well as texts by contributors such as Connie Butler, chief curator at the Hammer Museum, Carmen María Jaramillo, Karen Cordero Reiman, Miguel Loópez, Mónica Mayer, and Carla Stellweg.

Nearly one hundred years after the white cube model was first established, Radical Women is an affirming examples that contemporary exhibition design can continue to evolve and expand the fields of art history and curation. The radical femininity expressed by Giunta and Fajardo-Hill constitutes a body of curation that not only illustrates alternative histories, but narrates from within a range subjectivities, through a situated approach and a nuanced process of deliberation that takes into consideration the diversity of curatorial and creative contexts that an exhibition can empower.

[1] The first Pacific Standard Time focused on art in Southern California from 1945 to 1980, and the second on architecture and design.

[3] These are only just a few of the countless exhibitions that incorporate issues of gender and sexual identities in the intersections they explore. For a full list consult the Pacific Standard Time Website, specifically those exhibitions that fall under the themes of “Activism” and “Definitions of Identity”. 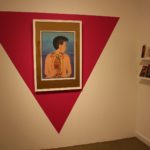 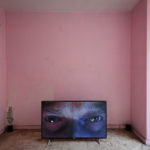 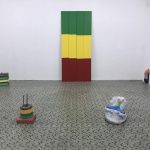