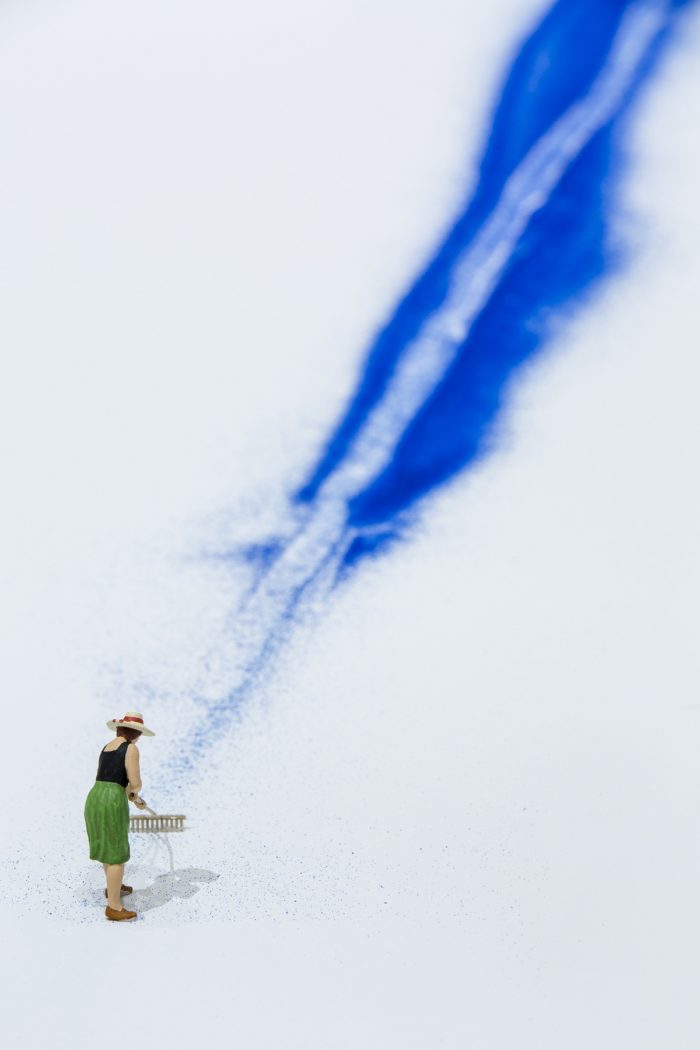 Reclaiming Subjectivity in the Museum

In the prologue of A Brief History of Curating, Christophe Cherix claims that while the “modern figure of the art critic has been widely recognized since Diderot and Baudelaire, the curator’s true raison d’être remains largely undefined.” Exhibition curation as a field of study continues to be a relatively new discipline; however, many seem to agree that the curator serves as a custodian, selector, and mediator between artist and public.

The SCAD Museum of Art is currently showing the first individual exhibition of the renowned Argentine-born and New York-based artist Liliana Porter, on view through January 2018. The museum, located in Savannah (the oldest city in Georgia), opened its doors in 2011 as a space committed to preserving cultural heritage and furthering the education of students as well as the larger community.

The exhibition Liliana Porter: Other Situations proposes, in the words of curator Humberto Moro, an historical overview of work developed by the artist over the last fifty years. Over 30 works are presented including engravings, photographs, drawings, and installations, as well as recent art objects and videos. The museum has close ties to the Savannah College of Art and Design (SCAD) educational program and seeks to promote interactive, flexible, and collaborative projects directed at students and young people. The emphasis on pedagogy is fundamental as this exhibition has been planned as a to catalyze the varying thought processes involved in different disciplines. Moro explains: “At SCAD Museum of Art we program our shows carefully, considering how these exhibitions, separately and together, will impact our pedagogy at SCAD…[where] we have majors of sequential arts, writing, gender studies, film, art history, and studio arts, to which this exhibition offers a unique opportunity to connect with the life and work of one of the most relevant cultural producers of our time.” [1] 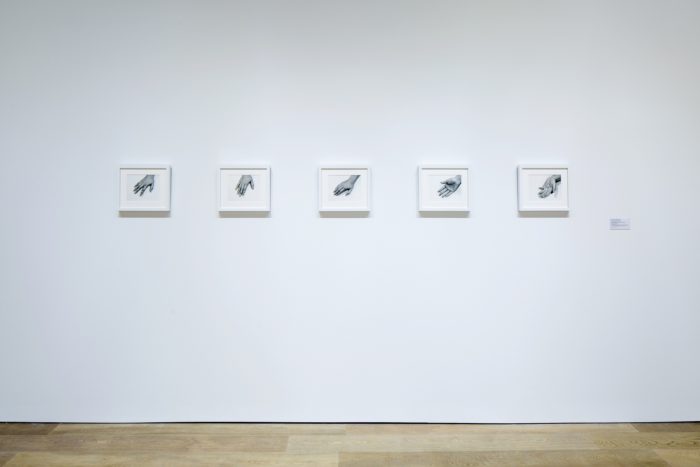 Installation view. Courtesy of the artist and SCAD Museum of Art.

Based on work made at four key junctures since 1973, the show as a whole demonstrates Porter’s early use of discursive obsessions in her practice. I refer here to the problematization, on one hand, of a linear notion of time and on the other, the relationship between reality and representation. Here, one can appreciate Untitled (Self-Portrait with Square) (1973), one of the most visible images from Radical Women: Latin American Art, 1960–1985 [2]; Untitled (Triangle) (1973), a wall-mounted installation of three photographs and a drawing; and The Square (1973), a photo-essay that explores the relationship between space and the body. This initial series is also accompanied by Untitled (Hand with Cross-hatched Drawing and Ring) (1973), Untitled (Glass + Boat) (1975), and Untitled (Drawing with Plastic Hammer) (1993-95).

Liliana Porter was part of the conceptual practice movement that began in the 1970s. Upon her arrival in New York in 1964, she found a cultural scene questioning artistic tradition and marked by the emergence of new forms of creative awareness. On the New York Graphic Workshop, founded in 1965 by José Guillermo Castillo and Luis Camnitzer, Porter said the following:

…basically, we engaged in fierce self-criticism and reflection on our artistic production. For my part, this led me to shift from making rather baroque work to more visually austere pieces, where thought appears as the protagonist over the distance between the thing and its representation, between virtual space and real space. [3] 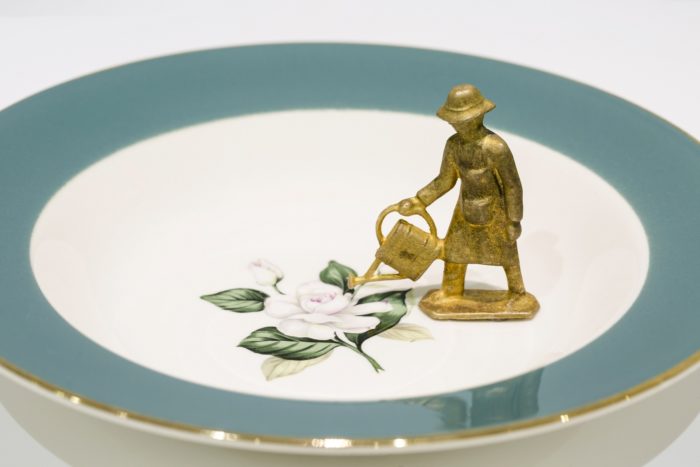 Untitled (Triangle) synthesizes this concern through the different temporalities and techniques that encompass it. The process for the piece takes as its starting point a 1973 photograph that captured the drawing of a line on a hand and its extension in space. This image became the inspiration for a photoengraving placed on a wall where the line is further extended. According to the artist, fragmentation and how we organize reality are two fundamental aspects of this project since if the engraving were to be reprinted and the line drawn from the beginning to the end, there would be a 30-year interval in the process. The extended line generates an illusion of continuity more in tune with a supposed temporal ergonomics—if you’ll let me borrow the term—while questioning how space, time, performativity, and the body converge.

The use of the term ergonomics, which comes from the Greek “ergos” meaning work and “nomos” meaning laws, is not coincidental in this context. While walking through the exhibition, you can appreciate some of the classic characters from the Forced labor series started in the 1990s. The gardener (The Gardener with Green Bordered Plate), the watch repairman (To Fix It 3:30), the painters (Man painting chair III and Man drawing II), the weaver (Weaver), the woman sweeping (Sweeping woman), and the man with an axe (Man with pickaxe). The dichotomy between representation and reality is visible in the gardening scene, since the woman working is placed on a green plate decorated with flowers. This produces a relationship between the character’s function and the represented image, establishing an associative game not without a refined sense of humor.

Forced labor presents tiny characters (toys) confronted with immense daily tasks in their proportional dimension: the man cutting an enormous wood plank or the woman who sweeps a long trail of blue dust. These scenes have an implicit lyricism that highlights the dramatic ambiguity in which the figures debate. Like the characters of Pirandello, they do not give up their condition of being forms fixed in time or in a permanent state. Objects obtained in thrift stores or antique shops have a certain character of self-absorption, introspection, and silence, reinforced by the predominance of missing spaces. 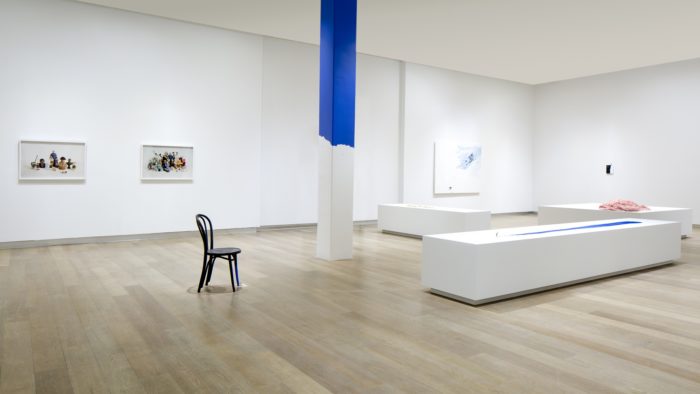 Installation view. Courtesy of the artist and SCAD Museum of Art.

This element is also characteristic of several paintings included in the show, News/The Way Out (2016) and Untitled with Fallen Things, as well as the photographs The Intruder (2011) and Memorabilia (2016), and her video production. The presentation of environments devoid of any reference contributes to the generation of parallel scenes (situations) where representation serves as a laboratory where we can think about ourselves from a humorous and ironic position. Actualidades/Breaking News, a 22-minute video, follows the structure of a news magazine or journal to narrate 30 segments with stories related to culture, fashion, tourism, and social issues. In her paintings, installations, and photographs, the cast of found objects, toy furniture, animals, musicians, soldiers, and souvenirs that represent icons of political history interact in a space only conceivable in hyperreality or in a simulacrum. At the same time, it is possible to establish a discourse about image consumption in contemporary societies based on the selection of prints with iconography of such figures as Che, Elvis Presley, Christ, and Joan of Arc Brie cheese.

Finally, one section of the exhibition lets us glimpse the importance of costumes in Porter’s imaginary, as well as the influence of Jorge Luis Borges and René Magritte in her production. One piece in particular, The Magician (1977), interests me because it features another characteristic that I think allows us to understand Liliana’s work from a deconstructivist, quasi-philosophical perspective. The fact that she makes us aware of her intervention in deconstructing the concept of veracity and revealing an ensemble of philosophical problems—involving language, time, and truth—bound by power relations.

To the roles of the curator set out at the beginning of this essay, we must add curator as producer of meaning. Other Situations is an exhibition of undoubtable methodological and museographic mastery whose merit lies in the selection of works, the use of space, and the continuity of the exhibition concept, and its effort to increase the visibility and recognition of Latin American artists in the United States. Thinking about the rise of curation as a subjective practice where race, class, and gender intersect—Humberto Moro is a Mexican curator based in Savannah—allows us to see other discourses associated with the deautomization of traditional museum management schemes, but, more importantly, it lets us foster dialogue about the role of activism in curatorial practice.

Aldeide Delgado is an art researcher and independent curator. She was the recipient of the Research and Writing Grant organized by Teor/ética.

[2] An exhibition curated by Celilia Fajardo and Andrea Giunta for the Hammer Museum as part of Pacific Standard Time: LA/LA. Radical Women: Latin American Art (1960-1985) explores the experimental art practices of Latin American female artists as well as US-born Chicana and Latina artists between 1960 and 1985, reevaluating their contribution to contemporary art. 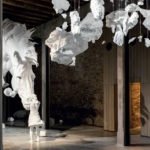 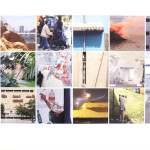