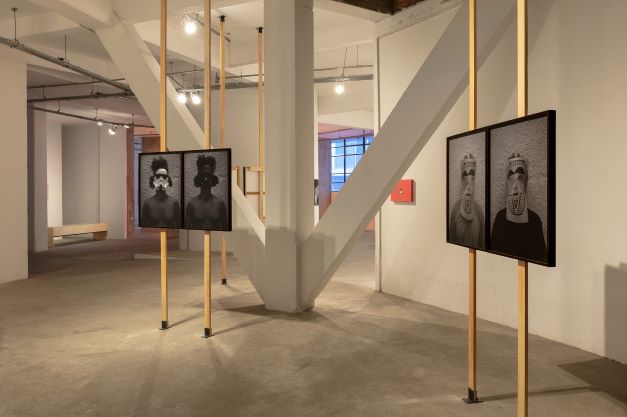 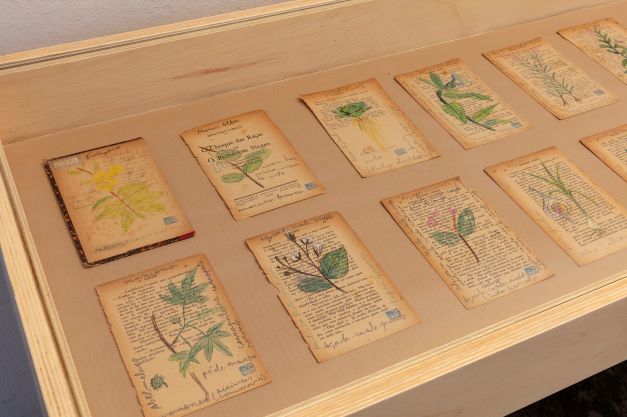 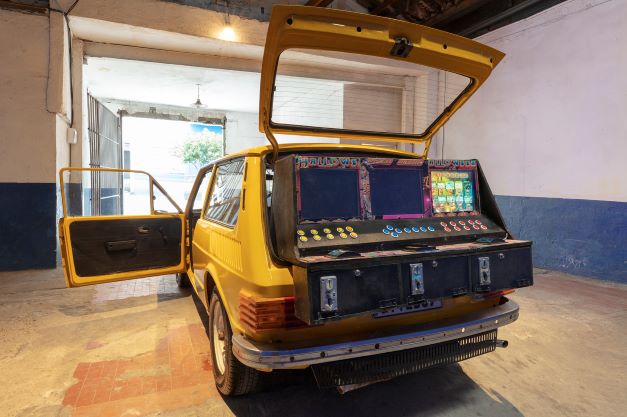 This exhibition stems from the question: how do we look back at the prolific practice of Paulo Nazareth – Arte Contemporânea/LTDA? VUADORA, Paulo Nazareth’s panoramic exhibition at Pivô, is above all an attempt to keep up with the rhythm and swing between bodies, words, and historical, geopolitical, and linguistic paths that have been the driving force behind the artist’s trajectory since the beginning of the 2000s, when he adopted the surname Nazareth, an ancestral forename:

I am Paulo. My name is Paulo Nazareth.
Nazareth comes from my mother’s mother.
Nazareth is a forename not a surname.
Nazareth Cassiano de Jesus. Born in
Vale do Rio Doce, of Borum origin.
To be Nazareth is to be my work.
To become. I carry the ancestral.
My grandmother becomes a sort of
carranca2, a figurehead, you know?
A sort of protection. An Egum entity
walking with me while offering
protection…3

The exhibition time is the spiral time that the artist has pursued across his travels in Latin America and Africa; a time that is measured and narrated via the body’s memories and performative ability, and that deliberately precludes linearity. Thus, any attempt at a chronological reading seemed pointless in VUADORA. In the show, we find Nazareth’s first and last works but perhaps this is not what they are, perhaps they are those and others. It could be that the first contains the last and vice-versa. Like the artist himself, the works on view contain many others; they are made of collective matter.

By combining emblematic works, many of them never seen before in Brazil, others that had never before left his studio in Palmital, Santa Luzia (MG), and a group of new works, we indeed confirmed the impossibility of resorting to linear time as a historical marker to explain Nazareth’s oeuvre. Above all, Nazareth invites us to reconsider grammar, parameters, and cartographies. For him, to live in a state of displacement is also to refuse the ever-violent structures that circumscribe and define him as an individual, a citizen, and an artist. In his work, scenes of self-defense complexify these markers and are updated at the same speed as the violence perpetrated by the global racial capital.

Nazareth’s visual vocabulary is deliberately fragmented, or perhaps more accurately, “in the making”. The hashtags accompanying the exhibition’s expanded subtitles are a collective effort to contribute to his broad lexicon. His ongoing series of words and images presents us with the possibility of a future that challenges the defining narrative of Black and Indigenous existence as an ‘excess that always already justifies (makes just) racial violence’4. By spotlighting power relations in non-prescriptive ways Nazareth evokes a recount of difficult histories of struggles and resistances that remain current in post-colonial societies. His pieces are at the same time a gathering of facts, stories, and characters at the margin of the historical canon, and a visual manifestation of the afro-indigenous knowledge underscoring contemporary Brazilian art. Since the beginning of his practice, the artist has been fighting erasure policies and raising awareness of the false dichotomies between what is perceived as popular or outsider and contemporary art. In this sense, by showing a rarely seen series of wood-carves and handmade artifacts, Vuadora highlights the importance of one of Nazareth’s key references, Mestre Orlando, a master carranca sculptor, and his mentor for years in the restless counternarrative Nazareth have been building for the past two decades.

VUADORA’s exhibition design and placement of the works reflect Paulo Nazareth’s multidimensional movements and fragmented thinking. Conceived as an open-ended dialogue, its format is revealing of how “escape” is a constant operation performed by the artist; an ever-spellbinding escape, fleeting and precise as the best “mandigueiros”5 do. The artist has been recurring to escape as methodology throughout his entire oeuvre. His films, found-object assemblages, performances, interventions, paintings, drawings, installations, and sculptures, like landscapes of memory, seem to gain new or expand their meaning in each context they are displayed.

VUADORA does not seek an easy way out, does not promise or project anything. VUADORA is already here, is what we already are: bodies in motion but not yet in tune. It is the game, the play, the tongue twister, the irony of a visuality felt from an Exu-ian and semantic crossroads. Taking shape in the time of the already told and experienced, VUADORA becomes new at each visit, it traverses, it splits, and like Nazareth, it is never fully revealed. As Fred Moten6 suggests: to move through and despite what encloses us also means to move the walls out of and beyond the enclosure. VUADORA is both spell and riot (arruazsa). There isn’t enough space at Pivô to enclose Paulo Nazareth’s linguistic and visual arsenal. His practice overflows out of and beyond the building, the city and, we hope, the exhibition duration.