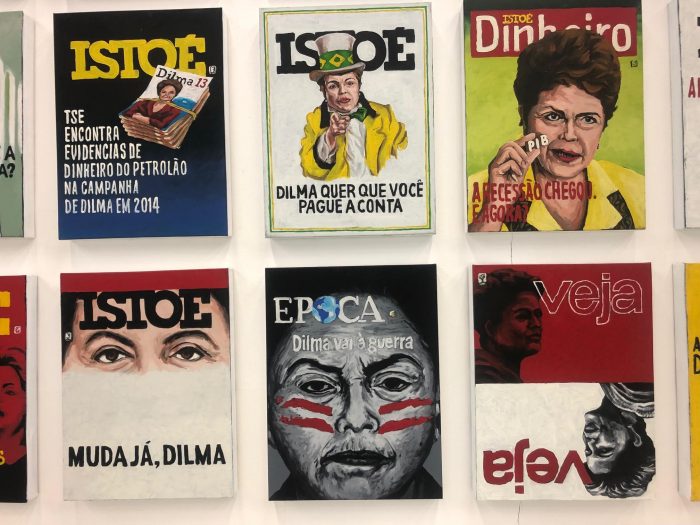 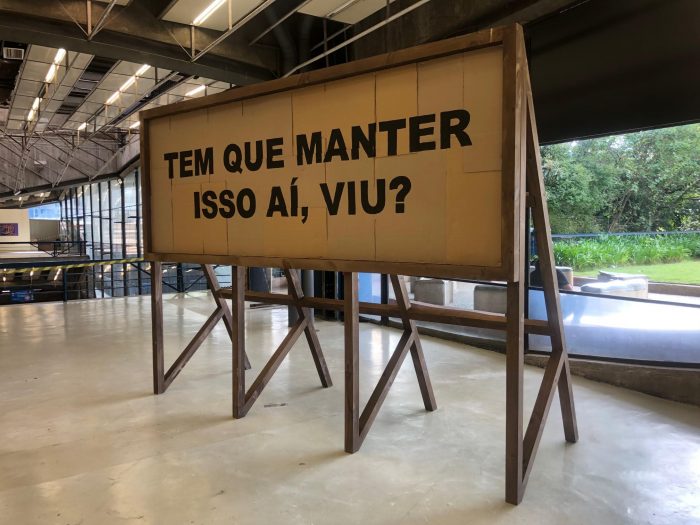 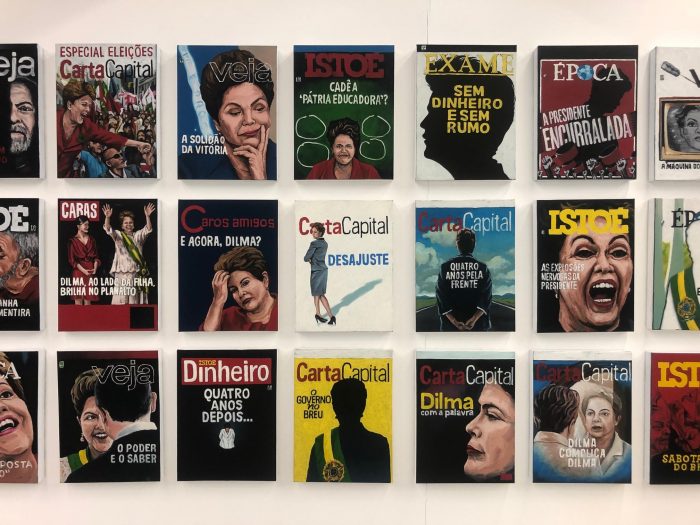 President of the Republic for two consecutive terms, Dilma Rousseff began to appear systematically in the mass media when she became a candidate in 2010 for the highest political office in Brazil. Since then, the visual artist Evandro Prado, owner of a critical interest in institutions such as religious groups, police and the press, has decided to constitute a dossier, through the index of the covers of magazines in which Dilma is the protagonist, from the beginning of the electoral campaign until her illegal deposition in 2016. Moved by personal nuisance in face of most of these covers that, articulating mainly photographic images and phrases of effect, sometimes ambiguous and not seldom direct, aimed to underestimating her—»Do you think I am a pole?» questioned a publication, confounding the notions of person and thing—the artist expetimented how these images would behave if they were paintings. It was born O Processo (The Process) / 2010-2016 (2017) series-dossier composed of 97 oil paintings in dimensions 40 x 30 cm, whose theme is the image and the social imagination of the mainstream media around the political representation of the first woman to to preside over a country of continental dimensions with a high concentration of income, a long history of genocide against indigenous and blacks and consequent hatred against the poor classes.

What can the installation Tem que manter isso aí, viu? (We have to keep it, see?)—which brings together the series-dossier of paintings with a billboard which reads the phrase said by the «president» who succeeded Dilma—teach us about the recent history of Brazil? What does it tell us about how the press stands openly to dissolve Dilma’s victory in the 2014 elections? Let us remember how this same partial media captures and defines new uses for the colors of the flag with the public: display of the mascot of the yellow duck (updated to green frog), guides the use of shirts of the Brazilian soccer team, praises military prints and, simultaneously, segregates the red color, aesthetic options that materialize physical and symbolic violence against Dilma. In A Presidente Encurralada (The Cornered President), the appropriations of visual elements of Russian constructivism combined with the fist of the Black Panther Party, tried to forge the idea that the people woke up. Banging pots and pans against Dilma is one of the reactions of the so-called «middle class» at that moment, to the fact that domestic work—exercised essentially by women—had been regulated by the Consolidation of Labor Laws.

With disconcerting objectivity, Evandro Prado creates an expressive and disturbing gallery and challenges us to never forget the interpretations conveyed by each cover weekly exposed in the newsstands. His commitment to the work urges to avoid that the succession of events that overthrew Dilma fall into the common grave of oblivion, due to new manipulations of past events.