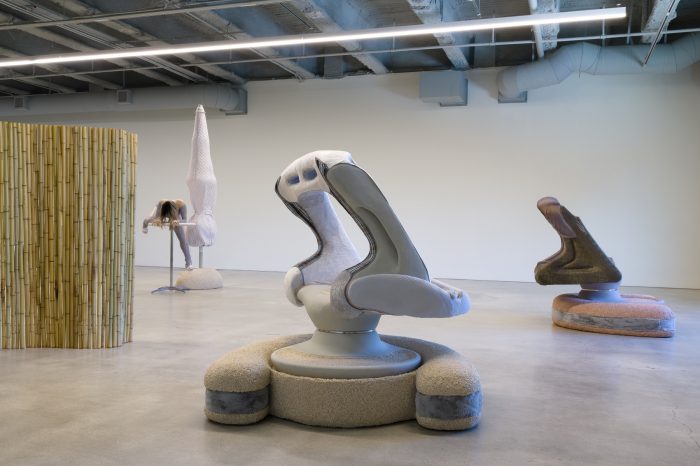 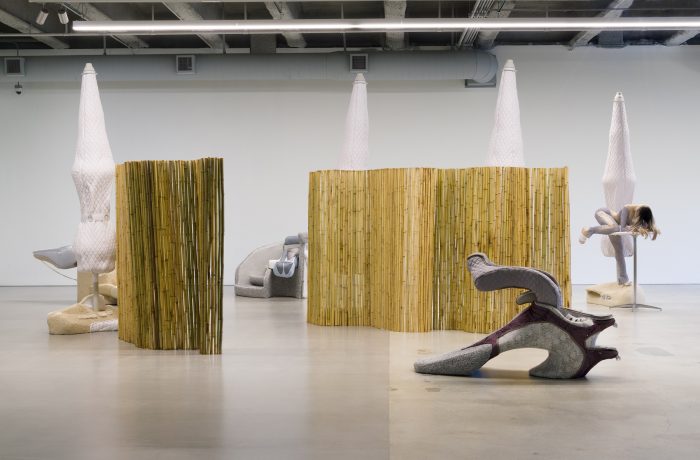 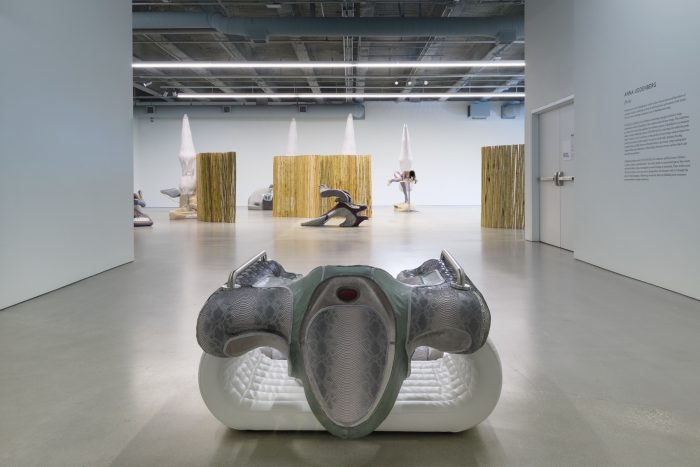 Anna Uddenberg explores social conventions and norms that are the product of consumer culture. She challenges ingrained ways of thinking and seeing as well as ideas of mental and physical mobility. Through the lens of the feedback loop that is social media, she analyzes systems of representation, the performativity of femme expressions and its cross-connection to consumer culture and gender studies. Her interest in femme as figuration is geared towards exploring power dynamics in the service domain, and disputes the idea of femininity by revealing what happens when these roles are amplified and over-performed to a degree of uncanny absurdity.

Engaging with notions of ergonomics, on view will be seventeen new sculptural works dubbed by the artist as PERVERTABLES, a descriptor where “perv” replaces the prefix “con”, as in convertible, referring to common objects that can be converted for sexual use, such as in kink culture. Uddenberg’s sculptures are rendered in forms and methods impossible to adequately function for their supposed purpose.

Uddenberg employs furniture—as a proxy for architecture—to imagine zones of leisure, comfort, and discomfort. With the desire to push the boundaries of relationships to material objects, the artist guides visitors to engage and find new perspectives of the invented functions in these newly rendered spaces, all at the intersection of utility, sexuality, consumerism, and performativity.

American philosopher and gender theorist Judith Butler’s coined ‘Performativity’ as “an act that has been rehearsed, much like a script, and that people, as actors who make a script a reality through repetition, come to perform in the mode of belief.” In Uddenberg’s work, this idea is translated into “sculptural script,” informed by the artist’s satirization of social coding.

Deviating away from the resort-like commercial spaces they inhabit, which are meant to be relaxing or intimate, these PERVERTABLES recast the user as the object, as if a seat or a harness was to demand how one interacted with it, and through such a dialogue, reveal the libidinal power structures present within everyday situations.

Anna Uddenberg (b. 1982, Stockholm) is a Swedish artist who lives and works in Berlin. Uddenberg studied at the Royal Institute of Art, Stockholm and at the Städelschule, Staatliche Hochschule für Bildende Künste, in Frankfurt am Main, Germany. Her work has been included in numerous institutional and international exhibitions, including the 9th Berlin Biennale, curated by DIS, Berlin, Germany; Manifesta 11, Zurich, Switzerland; Museum of Contemporary Art Kiasma, Helsinki, Finland; ARKEN Museum of Modern Art, Copenhagen, Denmark; Museum of Modern Art, Warsaw, Poland; in addition to other museums. The artist has also held solo shows at galleries including House of Gaga, Mexico City, Mexico; Kraupa Tuskany Zeidler, Berlin, Germany. This is the artist’s first solo show in Los Angeles as well as her first institutional show in the United States.