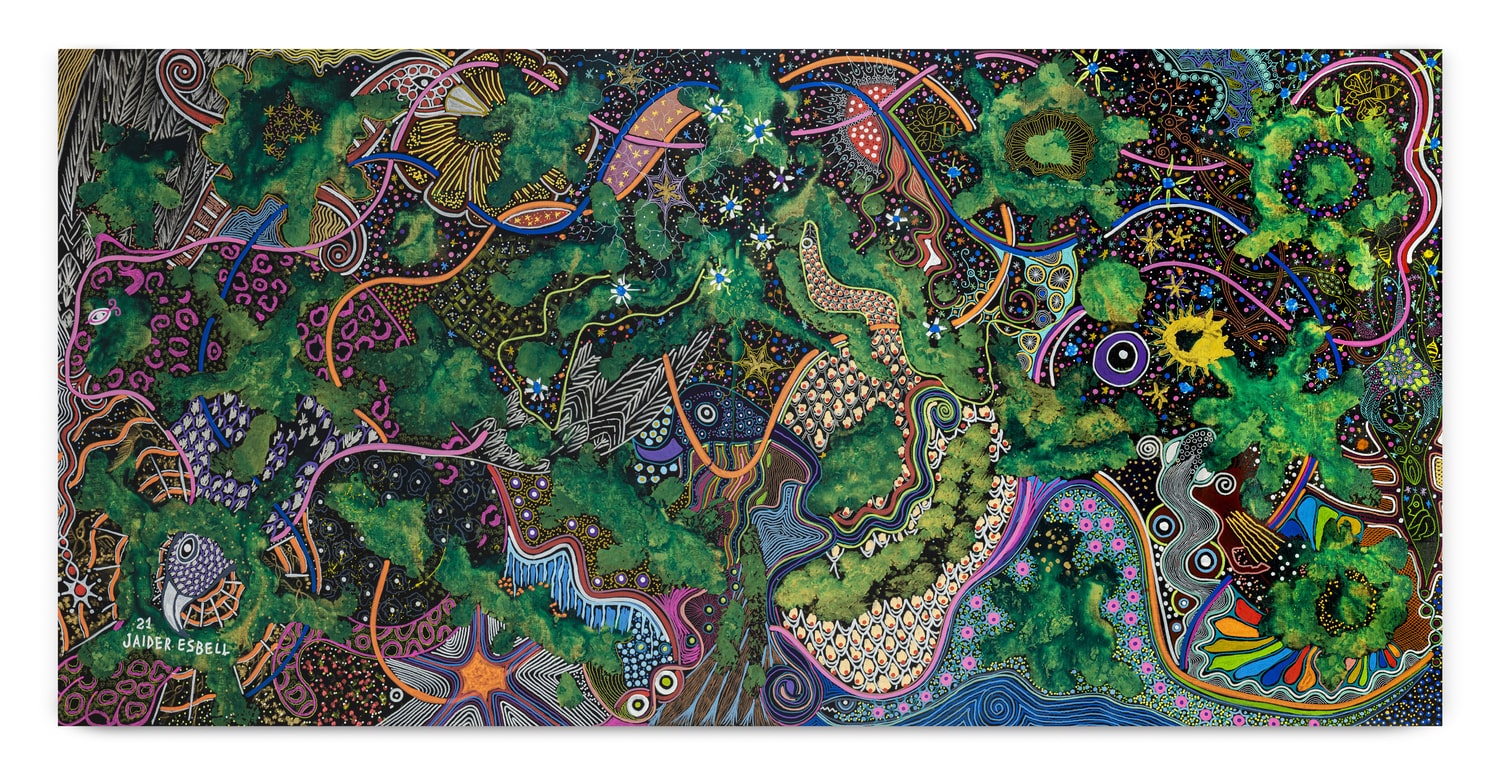 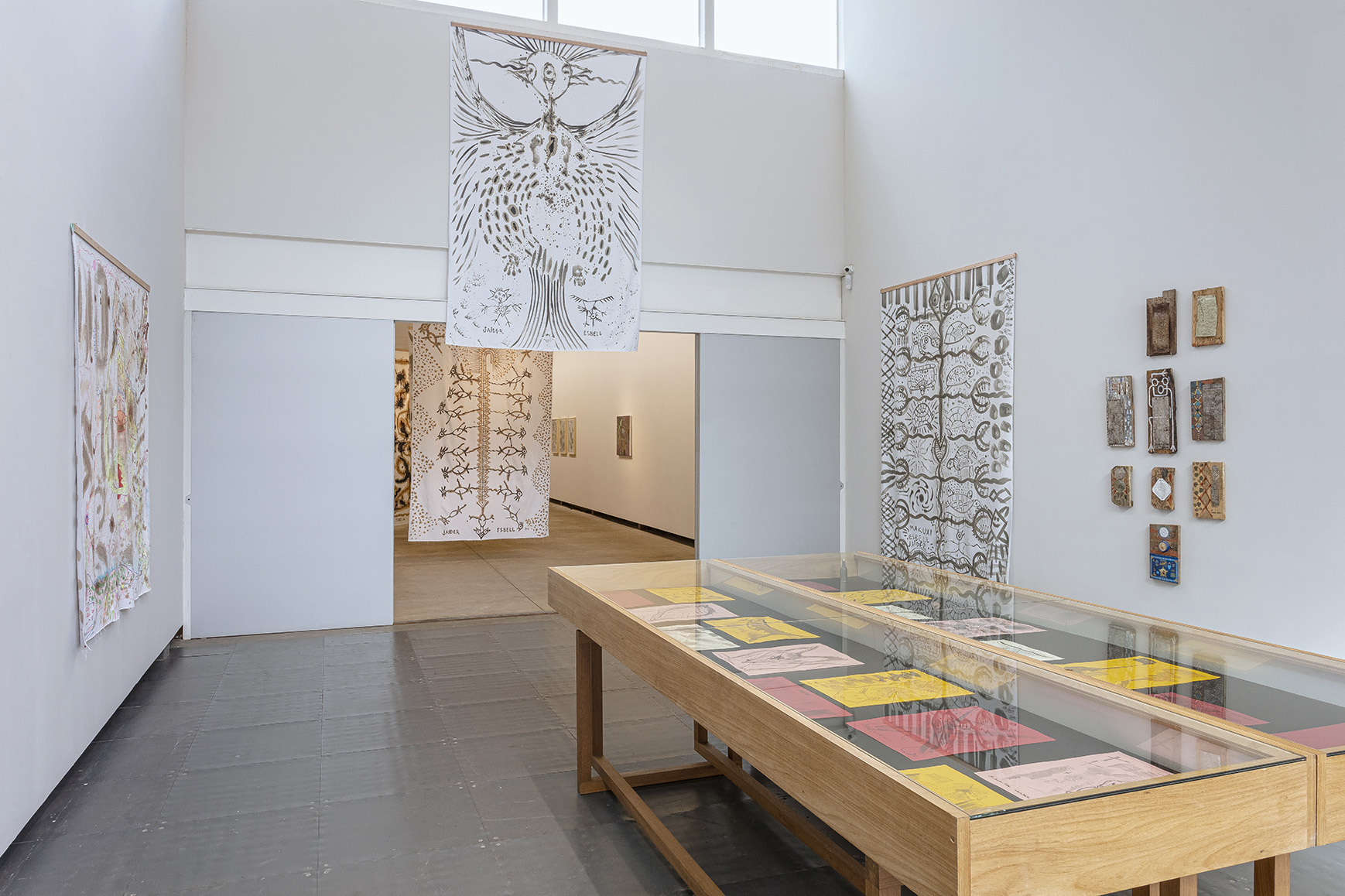 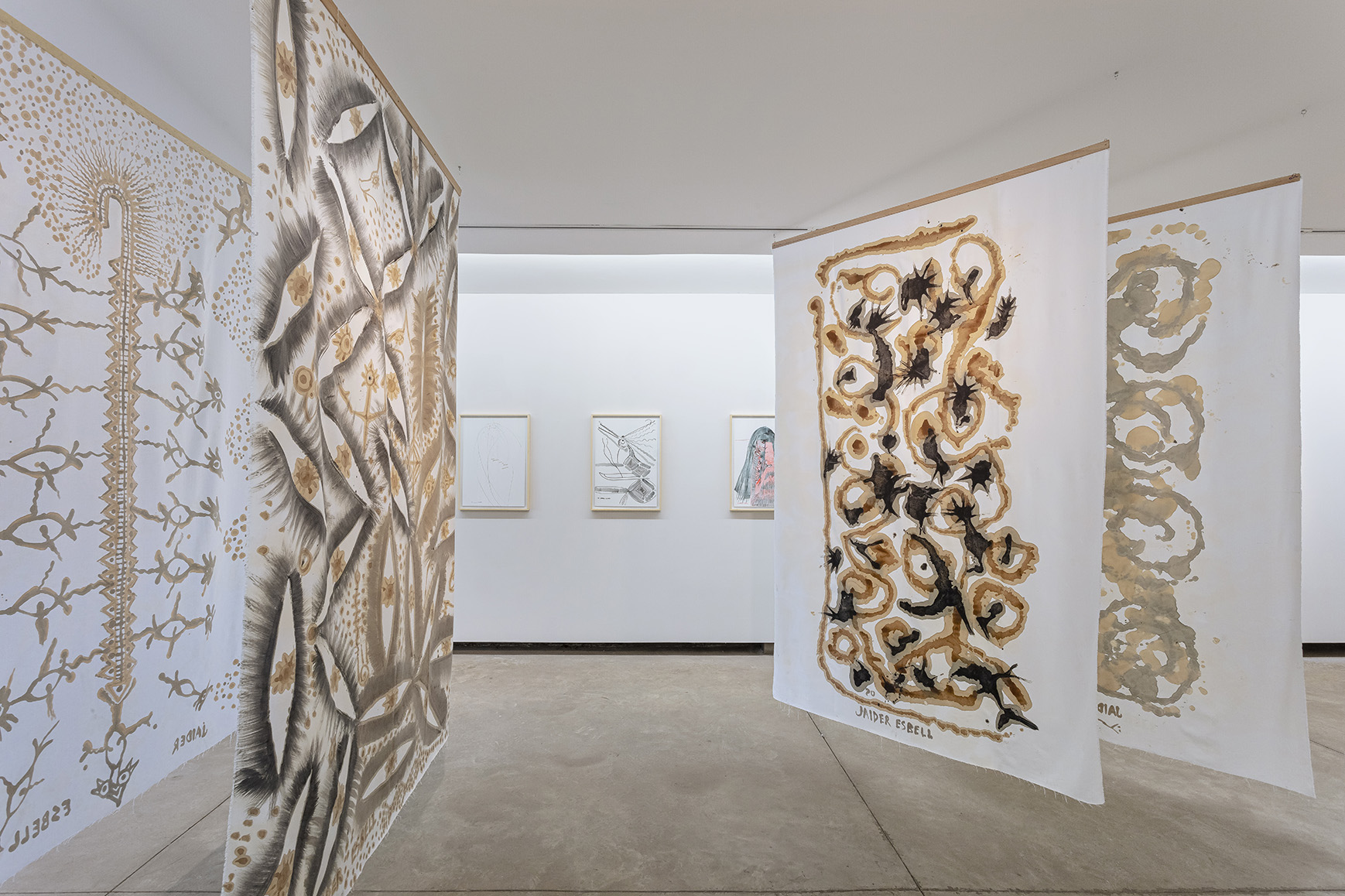 Galeria Millan is pleased to announce the exhibition Presentation: Ruku, the first solo show by Makuxi indigenous artist and curator Jaider Esbell. Curated by the artist himself, with the assistance of anthropologist Paula Berbert, the show brings together around 60 works, including paintings, objects and drawings, which highlight the artist’s diverse production.

Starting from the notion of artivism—a conceptual neologism that covers both the field of art and the social sciences—Esbell combines paintings, writings, drawings, installations and performances to weave intersectional discussions between cosmologies, original mythic narratives, spirituality, critiques of hegemonic culture and socio-environmental concerns. His more recent research has also delved into txaísmo—a way to weave relationships of affective affinity in the intercultural contemporary art circuit led by indigenous protagonism.

Since 2013, when he organized I Encontro de Todos os Povos (1st Meeting of All Peoples), Esbell played a central role in the movement for the consolidation of Contemporary Indigenous Art in the Brazilian context, acting in a multiple and interdisciplinary way and uniting the role of the artist, curator, writer, educator, activist, and cultural promoter and catalyst.

For the exhibition at Anexo Millan, the artist showcases a set of works, produced between 2019 and 2021, that focuses on his visions around the chief-tree known as Jenipapo or Ruku, a “fruit-technology and one of my grandmothers,” in Esbell’s words, from which is produced natural paint used by countless indigenous peoples for body painting and ritual ceremonies.

In a passage from his curatorial text for the exhibition, the artist states:

“I sign, as the Native Indian I am, this Presentation. After all, we are still, and finally, face to face and there is nowhere else to go. I know that I am who I present myself as and was told to take the first step. I invite you to be by my side. I have left the traps elsewhere; I stand now completely exposed. Believe me, I bring a rare gift, that which never lies. Do you want your soul back? This we understand well, for it was up to us to come first and I feel that you no longer dream.

Since before time was time, plants have shared amongst themselves the mastery of life: they are entryways to portals of further mysteries. Today in crisis, as the humans we believe ourselves to be, we still have, perhaps, the last opportunities to connect to the whole. A bush, no matter how small the branch, contains all the antidote for the poison that is the megalopolis: the overcrowding of the village, the perdition of senses. Drink tea and the fever will cease, drink tea and heal the pain, drink tea and speak to the Divine. That shouldn’t even be a secret, although it still is—segregation.”

Jaider Esbell (1979, Normandia, Roraima, Brazil) was born on the indigenous territory known today as Terra Indígena Raposa Serra do Sol, where he lived until the age of 18. As a teenager, he was in contact with social movements and participated in the struggles and resistance of indigenous peoples in the region, until he moved to the capital of the state of Roraima in 1998.

He was homeschooled by his mother, to whom he attributes his writing skills. In 2010, he received a scholarship for fostering literary production (FUNARTE / MinC), which made it possible to publish his first book, in 2012, Terreiro de Makunaima – Mitos, Lendas e Estórias em Vivências. This publication represents the consolidation of the work in art-education that Esbell has been developing autonomously in indigenous and non-indigenous schools.

In 2011, he started working professionally in the visual arts in a self-taught manner, when he held, in his native land of Normandia, the first integrated and professional exhibition called Cabocagem – O Homem na Paisagem. Consequently, the artist went from anonymity to the forefront of indigenous art and literature in the state, branching out into other media, such as poetry, photography and video. Today, his activities go beyond making art, placing him in the role of poet, writer, art educator and curator.

In 2020, the artist further expanded his presence in the national contemporary art circuit with, for example, his participation in collective exhibitions like Véxoa: Nós sabemos, Pinacoteca de São Paulo and the 34th Bienal de São Paulo with works exhibited in the main pavilion. In August 2021, Esbell will curate the collective exhibition Moquém – Surarî: arte indígena contemporânea, which will be held at MAM, São Paulo, as part of the latter’s program.