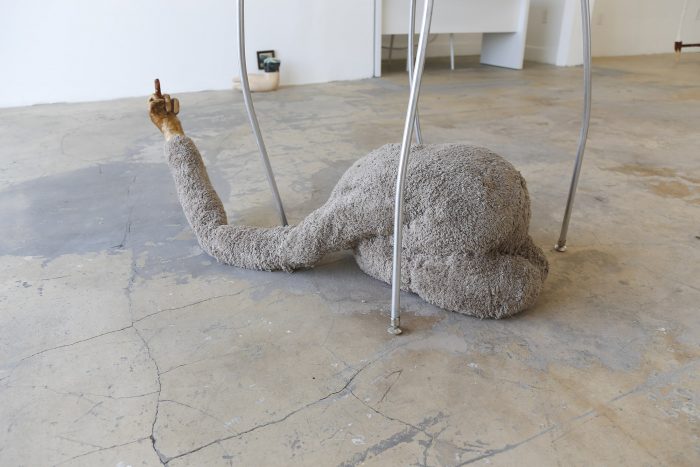 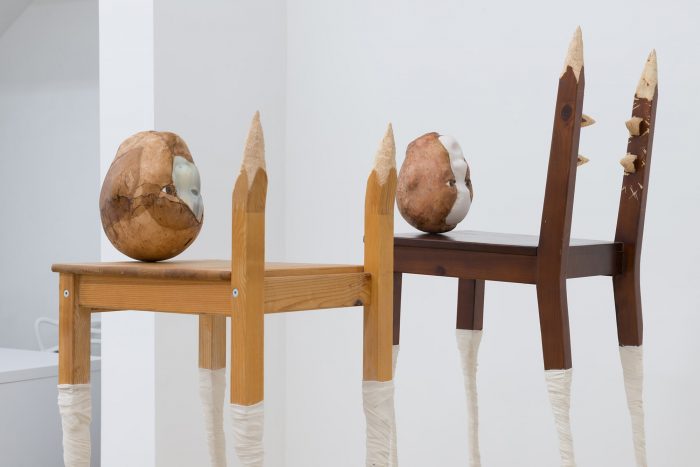 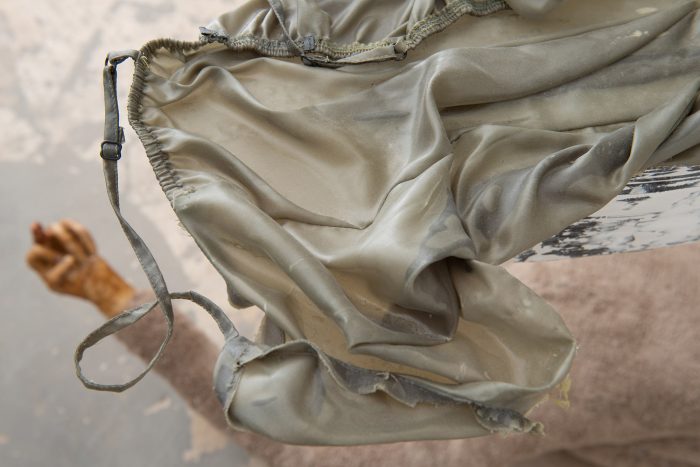 Make Room is pleased to present marrow, the gallery’s second solo show of new works by Catalina Ouyang. The exhibition includes sculptures that integrate abandoned chairs with heads made of carved stone, plaster, and bacterial skin; a soapstone figure looking into a mirror; alabaster sculptures; and a single-channel video installed on the ceiling of an unfinished attic, among other new works.

Ouyang’s oeuvre is situated in a framework of revisionist storytelling that resists essentialist metrics for navigating social space. In marrow, Ouyang builds on previous works to elaborate themes that confront language, space, and the power relations embedded within them.

Leaning on cross-cultural myths about stone and stoning—including the Gorgons, Biblical punishment, the Waiting Stone, and Ahalya—Ouyang develops a visual landscape of characters that instigate unfamiliarity and uncertainty. Ouyang carves stone as a way to feel into mythologies in which bodies are cursed or frightened into petrification, calling up questions of agency, resistance, and loss. Ouyang repeatedly returns her inquiry to the question of language and its departure from a body transformed.

In a series titled crisis management (2019), four decapitated heads of plaster and stone balance on the seats of altered chairs. Several of the heads are missing eyes, gesturing to a moment of wounding or theft. Their necks are hollowed out, creating vessels, and they are wrapped in translucent skins made from symbiotic colonies of bacteria and yeast (colloquially known as “mothers”). In a simultaneity of rupture and mending, the chair legs have been bisected, extended with steel rebar and plaster, then wrapped in white cloth. The legs and chair backs have been hacked into pencil-like points. In risk assessment (2019), resin-dipped nightgowns form the unlikely surface of a school desk. Underneath the desk, a headless figure kneels in a position of safety, lament, or prayer, extending one arm in a defiant gesture; nearby, a Pieta-like figure cradles an illuminated security camera filled with mothballs.

These objects come up to the edge of the place of where language exists, and instead of speaking, they inhabit that edge. There is the sense that this silence is at once an act of agency and loss, resistance and fatality. Within the visual complexity Ouyang creates, the viewer is confronted by a powerlessness to express what exists here: loss and violence; the darkened and illuminated corners of myth; our own avatars and unfinished attics. The viewer’s experience mirrors the objects’ rejection or incapacity of language, elevating reminiscences of the places speech cannot go—trauma, grief, calamity.

The viewer situates in paradox: agency with loss, death with transformation. The works create a constellatory effect that simultaneously builds the viewer’s informational context and perpetuates the forms’ evasion of definition. Ouyang is invested in the power relations of a scene, and the ways that proprioception is present, politicized, and usually unspoken. Though defamiliarized, the objects gesture toward the domestic and utilitarian spaces of school and home. The sculptures present conspiratorially, as though Ouyang offers them as an invitation to risk—the risk of participating in a viewing process that requires us to be with the incapacities of petrification. This is not a performance or mark of cynicism; it is a conversation among artworks, space, and viewer, instigated by Ouyang, about the forms that live after trauma, and the question of what existence is, and is capable of transforming.