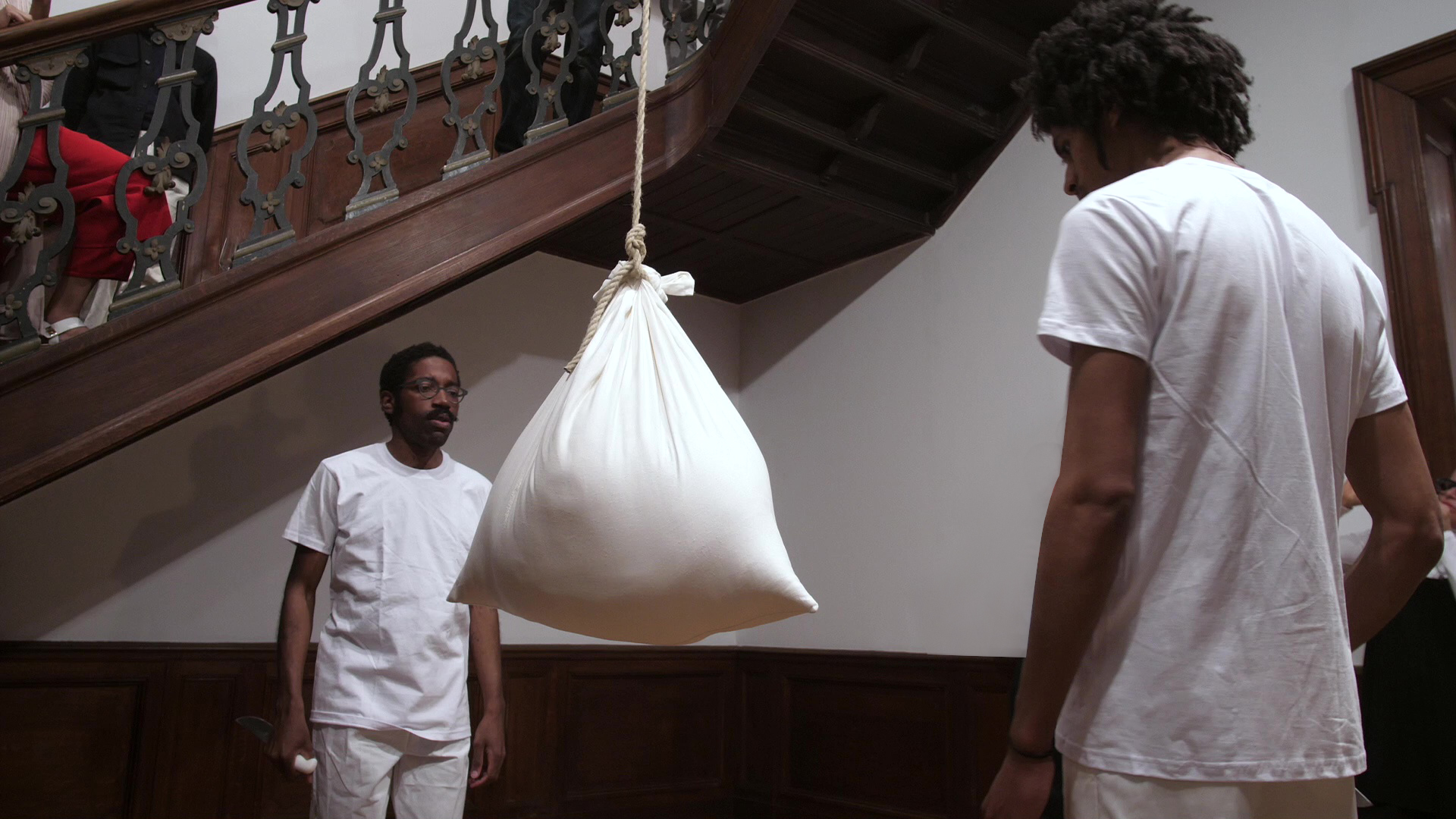 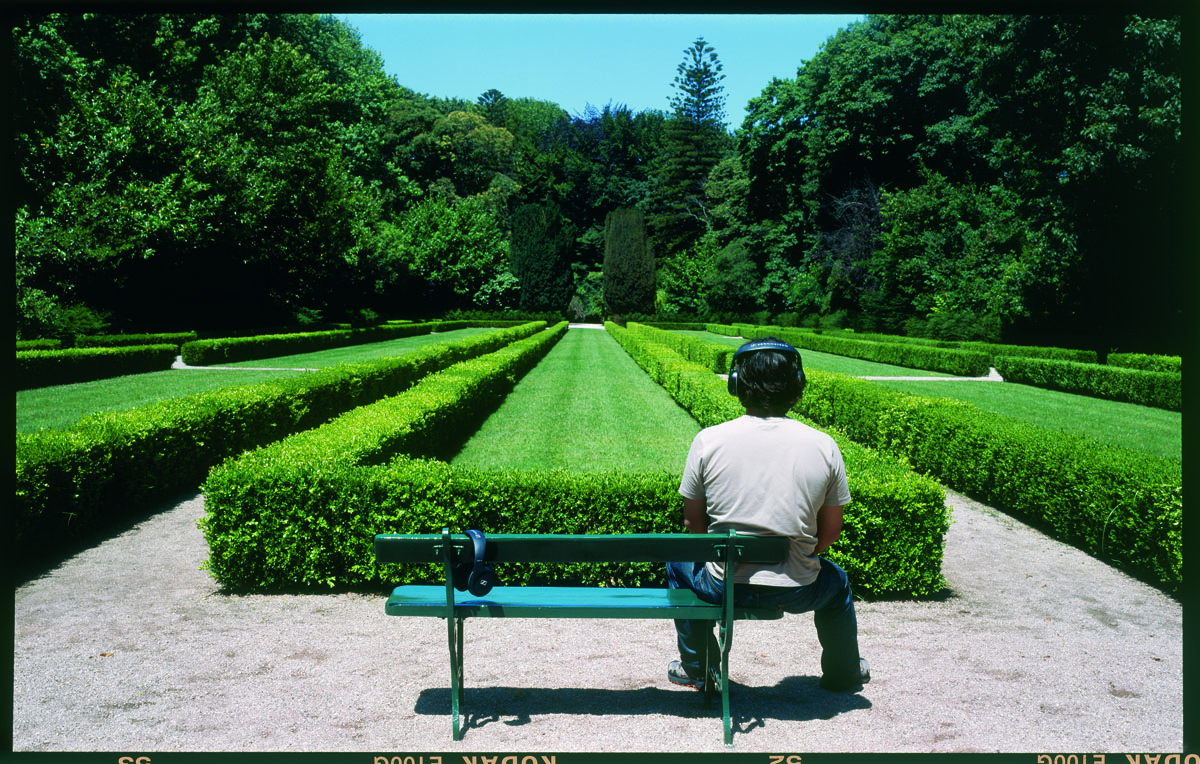 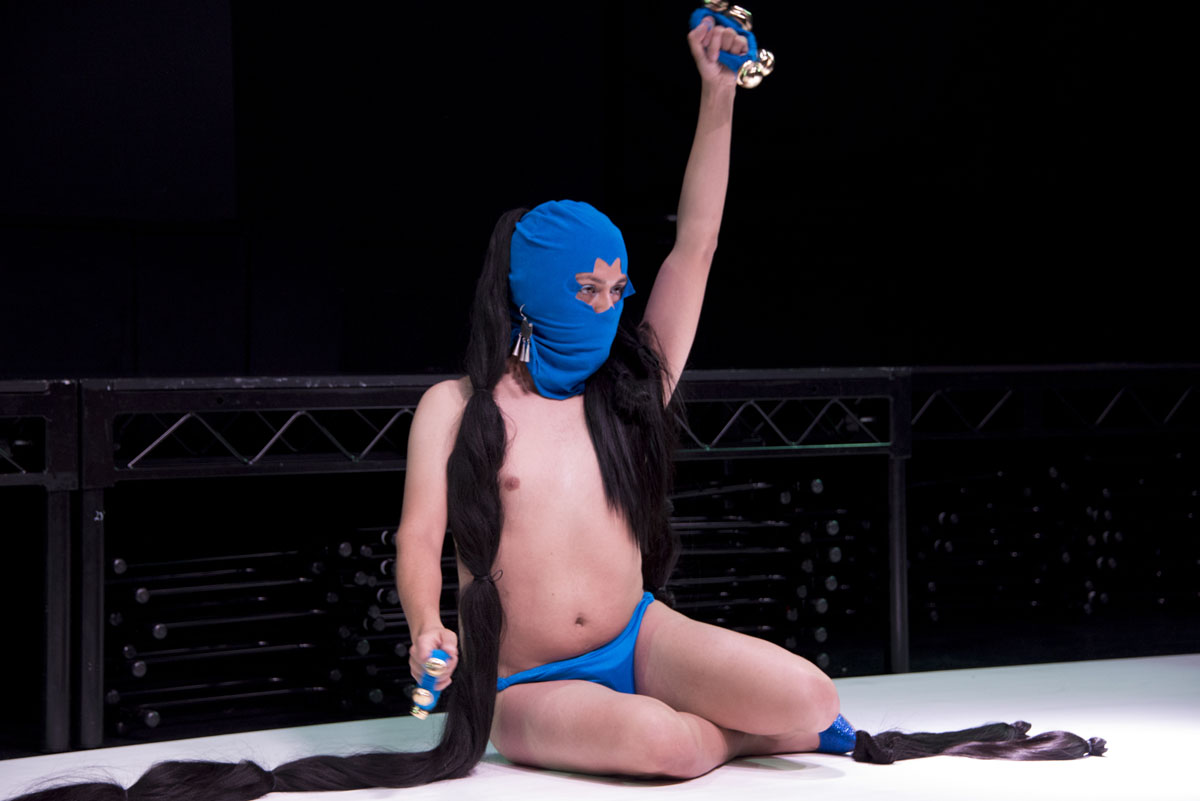 As cultural venues in the city of São Paulo start to reopen, the Fundação Bienal presents the show Vento​ [Wind], from ​November 14 to December 13, 2020​, at the Ciccillo Matarazzo Pavilion as part of the program of the 34th Bienal de São Paulo – ​Though it’s dark, still I sing​. Timed with the exhibition opening, on November 13, at 6pm, a performance by artist Paulo Nazareth was held inside the Pavilion whilst the building remains closed to the public. The performance was livestreamed on the​ ​Bienal Instagram​. While holding this exhibition, the Fundação Bienal is rigorously following health and safety protocols established for the local cultural sector. Access to the show will be free and open to all but advance booking will be strictly required.

Departing from concepts such as that of “relations”, the 34th Bienal adopted an innovative format by expanding itself in space—through partnerships with local and international cultural institutions—and in time—through the shows and actions held in the lead up to the central show, since February 2020. Even though the calendar of solo shows had been interrupted due to the Covid-19 pandemic, and the dynamics of the partner institutions network had been reprogrammed considering the exhibition calendar of each one of these venues, the guiding principles of this edition remain precise.

The newly conceived exhibition ​Vento​ points to an adjustment on the initially planned route—neither an interruption nor a complete new movement. While responding to the changes experienced by society as a whole, this adjustment is in tune with a curatorial project that, from the very beginning, proposed to be constantly open to public reflection, and, therefore, to be conceived as an open rehearsal.

For chief curator Jacopo Crivelli Visconti, “this exhibition functions as the index for this edition of the Bienal, in the sense that it points out some of the themes that will be expanded at the September 2021 exhibition, and at the same time refers to what has already happened, just as the index constitutes, in semiotics, a trail. Adjunct curator Paulo Miyada adds: «The project of this edition has always had the intention of showing the same works more than once, in different contexts and moments, to emphasize that nothing remains the same, neither the works of art, nor the public, nor the world around them. This movement is starting to materialize with this exhibition, it gains momentum with the shows held in the partner institutions which will be presented from now on, and will be completed by the making and unveiling of next year’s larger exhibition” (to take place between 4 September – 5 December 2021).

For José Olympio da Veiga Pereira, President of the Fundação Bienal de São Paulo, «the Bienal plays a substantial role in the cultural life of the city of São Paulo. During the period of stricter social isolation, we have intensified and diversified our digital programming, because we believe that contact with art is essential for society, especially in moments of crisis. We are now holding this exhibition and reopening the Pavilion with the same intention—that of creating opportunities for us to be together, in a safe way, around artworks that can help us process, individually and collectively, the unique moment we are living”.

Alongside the opening of new exhibition ​Vento​, six other new participants are also announced as part of the 34th Bienal digital programming to develop over the course of the following months: Jaune Quick-to-see​ (1940, Montana, USA), ​Lydia Ourahmane​ (1992, Saïda, Algeria), ​Naomi Rincon Gallardo​ (1979, North Carolina, USA), ​Sebastián Calfuqueo Aliste​ (1991, Santiago, Chile), ​Sung Tieu​ (1987, Vietnam) and ​Uýra Sodoma​ (1991, Santarém, Brazil). The 34th Bienal de São Paulo online program, substantially extended since the decision to postpone the larger group show until 2021, includes an array of supplements to the show. Examples of these supplements are: live streamed events, virtual studio visits and exhibition tours from different Bienal partner institutions, curatorial correspondences, and a six part series during which the curators of the 34th Bienal de São Paulo and the exhibition’s participants discuss the themes of the show.

The exhibition, which inaugurates the dynamics of organizing the works around ​statements​—select historical elements with dense stories that suggest multifaceted readings—, is titled after Joan Jonas’ film ​Wind​ (1968). In the film, the US artist recorded the efforts of a group of performers to execute a choreography on the beach of Long Island, New York, on one of the coldest days of 1968. According to Jacopo Crivelli Visconti, chief curator of the 34th Bienal, “the film not only portrays the performance, it portrays the wind: the role of the dancers, in this sense, is to make the wind visible. Sometimes it is necessary to put something into the void so that it reveals itself full of things we cannot touch or see. We had already decided to exhibit this work in the larger group show of the 34th Bienal (and the visitors will be able to re-encounter this piece next year), but now, in the context we are living in, it has gained new layers of possible reading and interpretation”.

One of the most remarkable aspects of this exhibition is its installation: unlike the usual, no exhibition walls will be built for this show, and the architecture of the Ciccillo Matarazzo Pavilion will remain in its original state, welcoming the artworks directly, without elements to create a mediation between the human scale of the works and the monumental dimensions of the pavilion. By including mostly immaterial works (in audio or video), the exhibition seeks to emphasize a sense of space and distance that can rarely be experienced by the public at exhibitions and events usually held at the building.

This format creates a dialogue with the present moment both because is has been conceived as a way to comply with social distancing regulations and because of its conceptual motivations: “the distance between the works invites the public to look not only at the artworks, but also at the space between them, and to read in this gesture a poetic resonance of the need to distance oneself from others and from the world. At the same time, to trust that few works will fill such a large space is to invest in the capacity of art to reverberate infinitely, making it an irreplaceable tool to face and overcome dark moments such as those we live”, explains Crivelli Visconti.

The relationship between what is seen and unseen, the material and the immaterial is also featured in the performance by Paulo Nazareth ​[A] LA FLEUR DE LA PEAU ​[[ON] THE FLOWER OF SKIN]​ (​ 2020), never before presented in Brazil. Underlining the exhibition opening, yet without generating agglomeration, the performance was held on Friday 13 November, at 6pm (GMT-3), inside the Bienal Pavilion whilst the building remains closed to the public. The performance is aimed at online audiences, and was livestreamed via the​ ​Fundação Bienal Instagram page​. In the work, non-white people punch a bag of wheat flour hung from the ceiling and use a broom to rearrange the white powder on to the floor, shaping it into a defined circle. In so doing, the performance problematizes, in a symbolic way, colonial relations of power, both by the gestures and bodies on stage as well as by alluding to the various meanings and uses attributed to the circle (and geometry) by different Western and Eastern systems of knowledge. From the following day onwards, visitors will be able to see, in the space, the remains of the performers’ action, which will also be then transformed throughout the exhibition period and through the action of the draughts that flow inside the building.

The fact that ​Vento​ unlocks the dynamics of organization of the artworks around the concept of statements​ is a key milestone in the wider programme of the 34th Bienal. The ​statements​ are select historical elements, elected by the curatorial team, with dense stories that suggest multifaceted readings. The dynamic of organising the exhibition around such ​statements​ will be expanded in the larger group show in September 2021. In ​Wind​, the curators resort to two statements​ to create resonance: the ​Sino de Ouro Preto​ [The Bell of Ouro Preto] and the Tikmũ’ũn​ ​chants.

Represented in the exhibition by a newly commissioned video, the ​Bell of Ouro Preto​, cast in Germany in 1750, is placed in the the bell tower of the chapel Nossa Senhora do Rosário dos Homens Brancos, known as Capela do Padre Faria, in Ouro Preto (MG), Brazil. This bell was the only one to toll on April 21st, 1792, the day of the execution of Tiradentes, main leader of the Inconfidência Mineira, a Brazilian Independence movement against the Portuguese colonial rule. Such action had openly gone against an official order which prohibited any tribute to the appointed enemy of the Portuguese Crown. With the following independence of Brazil and the proclamation of the Republic, the martyr Tiradentes was declared a national hero, and the bell that honoured him became a symbol of the fight for independence, to such an extent that, on another April 21st, it was taken to the country’s new capital, Brasília, where it was hoisted next to the cross that had been used in the very first mass celebrated in Brazil, and rung on the occasion of the inauguration of the new capital. In the exhibition ​Wind​, works created in different times and places will be grouped around the image of the bell, and occasionally bathed in its sound, alluding to the return, either as a tragedy or as a farce, of dark moments, and the need to oppose them with ideas, bodies and chants—be they literal or symbolic.

In its first appearance as part of the 34th Bienal, recordings of some ​Tikmũ’ũn ritual chants ​will be incorporated into the exhibition to serve as a poetic counterpoint and symbolic catalyst for a set of works that have among their triggers a reflection on memory. The Tikmũ’ũn, or Maxakali, are an Indigenous people from a region between the current Brazilian states of Minas Gerais, Bahia and Espírito Santo. After numerous episodes of violence and abuse, recurrent since colonial times, the Tikmũ’ũn population was close to being exterminated in the 1940s. Forced to abandon their ancestral lands to survive, they are today divided in ​aldeias​ (Indigenous villages) settled along the Vale do Mucuri (Mucuri Valley), in Minas Gerais. The Tikmũ’ũn chants organize life in the villages, involving their rich cosmology—constituting virtually an index of all the elements that are present in their lives, such as plants, animals, places and objects. Most of these chants are performed collectively, and are often intended for healing. Among the Tikmũ’ũn, the act of singing becomes an integral part of life, as it is through the chanting that they preserve their memories and the community is formed. 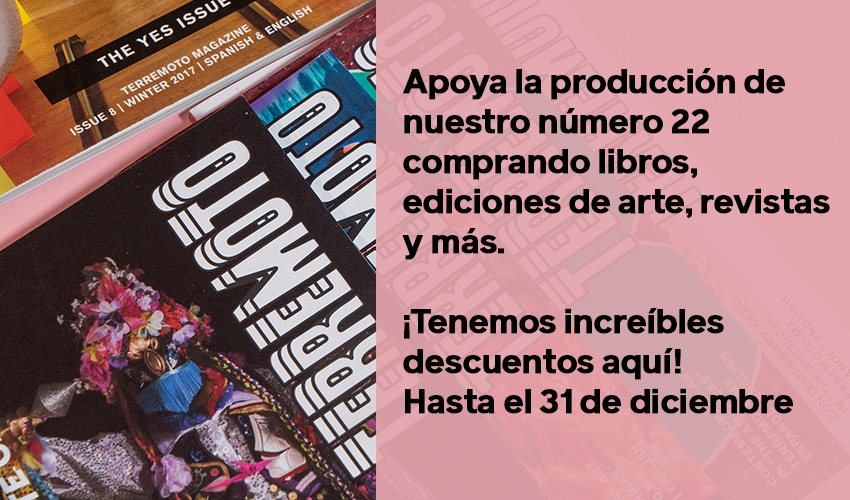