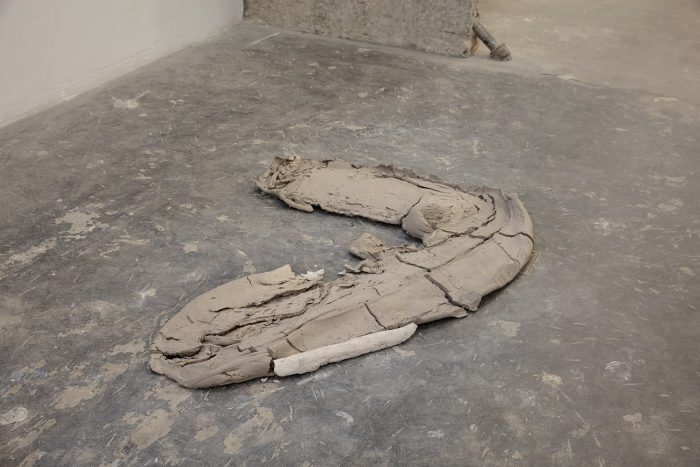 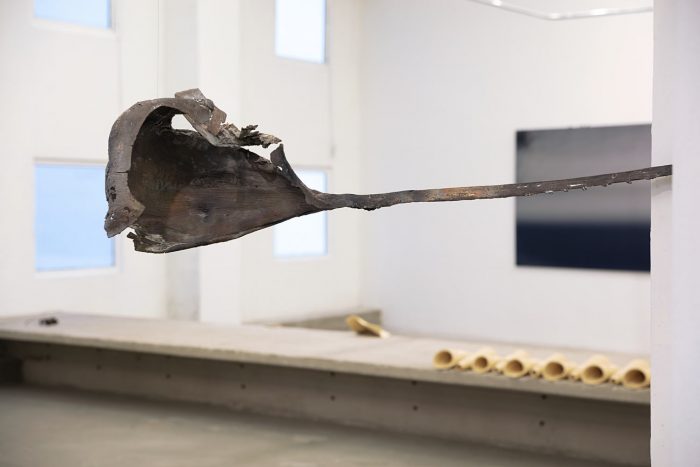 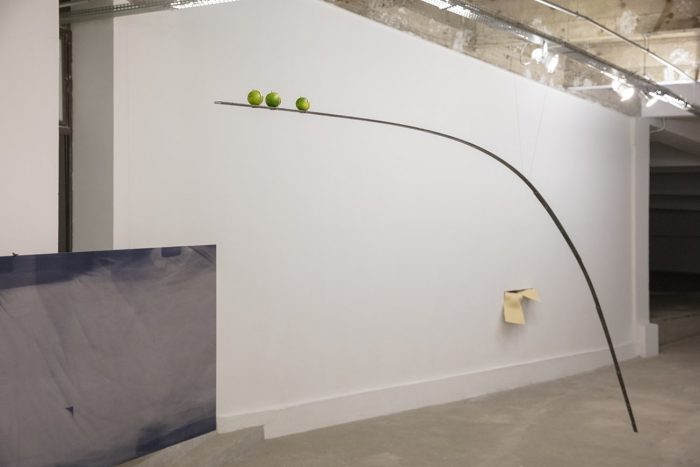 The exhibition is about places where people live together, populations, problem zones, contact zones and tenderness, polluted bodies, loss of control, suspended moments, reasons to hold together. Cities are all different but the same.

Paris and São Paulo, who cares, humans and animals, concrete and words, vessels and cracks, maybe it’s just a question of temperature and intensity. In the end it’s about dignity.

Avalanche wraps Pivô’s annual exhibition program in 2019. This is the first time the Paris based, German artist Katinka Bock presents her work in South America. The project is comprised entirely by new works informed by her recent visits to São Paulo, and by a thorough investigation of the building that houses Pivô, the iconic mixed-use giant Copan, projected by Oscar Niemeyer in the sixties. Bock presents a series of sculptures made out of bronze, ceramics, unfired clay and other materials, organic or inorganic, all recurring in her production.

Bock’s work often responds to specific geographical contexts and space. Taking into account the architectural, urban, social, climatic, temporal and environmental features of the place she is currently working in. Her works build an ongoing movement between the interior and the exterior of the spaces where they are installed, also affecting the social interactions that inform these places. The artist uses sculpture to address the relations between time and space, history and geography, natural and artificial, perennial and ephemeral. Interested in natural processes of transformation, Bock produces sculptures and installations that result from events that seem to challenge the chosen material, generating a symbiotic relationship between static artificial constructions and nature in constant motion. The artist frequently uses natural materials, such as leather, wood, stone, fabric, plaster, ceramic or graphite, in addition to found objects.

Avalanche is the combination of a series of sculptures and spatial interventions inspired by Copan’s microcosm, in which the artist confronts her usual working materials with the local context and the space’s unusual architecture. Horizontal word, Copan (2019) is perhaps the most radical gesture in the show, in which the artist drops a large block of unfired clay from the top of the building. Like a falling body, the piece will bare in its final form the violence of the impact of the raw matter on the ground. A type of violence that points out to the complex living conditions of a large and dysfunctional megalopolis like São Paulo, in which its high social injustices are often imprinted on the bodies of a great deal of its inhabitants. In Fountain for
avalanches (2019), Bock creates a mechanism to capture raindrops with a funnel connected to copper pipes running through the space. The water runs over the gallery, falling first into a sink borrowed from one of the apartments and then finds its way to the street again through a hole on P ivô’s floor.

In the work For your eyes only, parte pelo todo (2019) Katinka Bock stretches a 20 sqm piece of blue cloth on Copan’s rooftop. The fabric was placed during her visit to São Paulo in April, and after almost four months of exposure to the weather, it was framed and hanged in the exhibition space, showing the marks of time passage. Bock is also presenting a group of ceramics made in a workshop at Centro Universitário Belas Artes and built a large hammock-like structure with a cut-off piece safety net wraps the entire building (Copan is under a renovation process for the past years).

This kind of appropriation of elements of civil construction as starting point for sculptures and installation also can be seen in Sand (01046-925) (2019) in which the artist crashes debris into tiny pieces until they are transformed in a kind of “sand”, as Bock calls it.

Literally, an avalanche refers to an abrupt and massive displacement of snow. As a figure of speech, however, the phenomenon refers to anything that strikes with violence. If the climatic conditions of a tropical country like Brazil do not allow the occurrence of real avalanches in its territory, catastrophes of another nature arise from the country’s political condition. Bock is interested in the changes these kinds of abrupt irruptions can provoke.

Katinka Bock (Frankfurt, 1976) lives and works in Paris and Berlin. Among her solo shows are Radio/Tomorrow’s Sculpture, IAC (2018); RADICETERNA, Manifesta 12 (2018); Smog, Meyer Riegger (2017); Horizontal Alphabet (black), MUCEM; «-0-0-0», Mercer Union (2017). She received awards and grants from Fondation d’entreprise Ricard Prize (2012); Museum of Contemporary Art of Detroit (2010) and Cité Internationale des Arts (2007). In October 2019 she had a solo show at Center Georges Pompidou as part of the Prix Marcel Duchamp, the most important art prize in France. Her work is regularly discussed in publications such as Le Monde, Vogue, Beaux Arts Magazine, Frieze Magazine, Art Press, ArtForum, Artnet, among others.