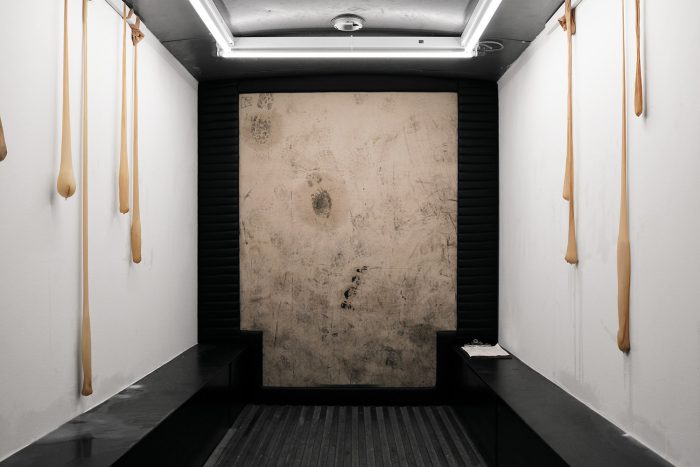 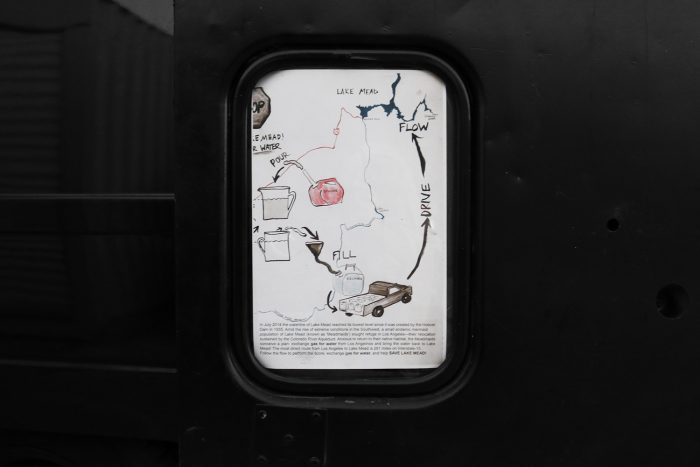 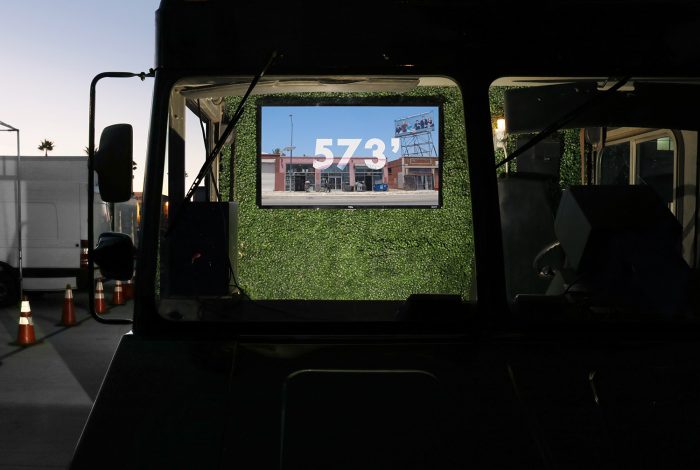 Anatomy of Oil is a group exhibition exploring oil production around Los Angeles. The oil industry greatly influenced the development of the city, which continues to maintain many active extraction sites, often in close proximity to schools, homes, and parks. In some cases, companies build creative solutions to hide oil derricks, disguising them as trees or towers. The derricks are a particular, and sometimes overlooked, feature of the Los Angeles landscape. An object that is itself an invention of oil dependence, Gas’s converted delivery-truck gallery parks at active and former oil extraction sites around Los Angeles (in addition to art spaces) to encourage an ongoing conversation about the hold of the oil industry on all levels. Named after a poem by Marcella Durand that examines these issues through an eco-feminist lens, Anatomy of Oil includes sculpture, drawing, painting, and video in the gallery truck, a browser plug-in available for download at the gallery’s website, as well as a series of site-specific performances and a reading group. [1]

One theme in Durand’s poem is a ceaseless, roaming hunger for oil, and the destructive path that follows each discovery. Coinciding with this violence—realized in the form of environmental damage, the displacement of populations, pollution, etc.—is the routine presence of oil in most aspects of modern life. The works in Anatomy of Oil focus on the effects of petro-capitalism on everyday lived reality.

Molly Tierney’s Untitled (2018) is a canvas stained with oil-based household products. Interested in the web of connections within local economies and the dialogue that comes with collaboration, she orchestrated the work with a crew of mechanics at Brake Masters in Altadena, Javier Vega, Fausto Molina, Jose Felix Vega, Gabriel Piste and Guillermo Gutierrez, who used the canvas as a drop cloth during their workday, and a vinyl upholster, Lio Ebenezer in Highland Park. The result is a quilt-like tableau of oil’s material circulation and application in the day to day.

Nina Sarnelle’s piece Sound for the long hole (2018) also attempts to make the scale of oil production less abstract. For her new work, she researched a hidden oil drilling site on Washington Boulevard, one block from where she resides. This lot, concealed from view by a solid topiary wall, inspired a performance and a video and sculptural installation in the front driving cabin of the gallery truck. Using publicly available data, Sarnelle discovered the depth of one well to be 9,514 ft. The work aims to make this depth comprehensible, and uses it to address the complex system that produced this “long hole,” from engineering to landscaping choices. For the performance, Sarnelle wears a costume that mimics the topiary, and performs a 40-minute music composition that addresses the urban legacy of oil drilling in LA, a Ross Dress for Less on Fairfax that exploded in 1985, and her own gastro endoscopy. A 9,514-foot-long pile of twine appears in the performance, installation, and video. The video captures a daylong shoot, where the twine snaked down Washington Boulevard for this exact length while attached to the Gas gallery truck. Rather than remaining in the abstraction of rarely read city infrastructure permits, the flat calculation of the oil well’s depth provides a chance to explore our personal and material relationship to oil production.

Other works find strategies to disrupt the built structures that obscure the presence of oil wells, such as LA Transcendental Listenings, a collaboration between artist David Horvitz and curator Asha Bukojemsky. The group organizes walking and listening tours of various sites around Los Angeles, and on the occasion of Anatomy of Oil, they will take a group to the shore closest to THUMS Islands in Long Beach. THUMS Islands are four artificial islands built in 1965 to tap into the East Wilmington Oil Fields. In order to hide the wells visually and sonically, theme park architect Joseph Linesch was hired to transform the exterior of the drilling rigs into a replica of a futuristic cityscape. This architectural anomaly still stands today, and LA Transcendental Listenings will lead a listening exercise at the water’s edge in order to circumvent the structure’s intended purpose of sound dampening the oil drills.

Works such as Elia Vargas’s sculpture Oil rituals for the future #6 (2018) attend to the material qualities of oil itself, and how they formally contribute to its pervasiveness both economically and culturally. The work is made of paraffin wax, a hydrocarbon derived from petroleum. Paraffin wax was discovered in 1830, transforming home illumination, and it continues to be used in food, beauty products, and manufacturing. Contained in nylon stockings (the first synthetic material, derived from petroleum in a DuPont research lab in 1935), the sculptures are designed to melt in concert with the heat conditions of the truck gallery. This slow and unpredictable transformation mirrors oil’s mutability and relentless impact on the cultural formation of the body.

The economy’s complex and pervasive ties to oil are made explicit in Michael Mandiberg’s Oil Standard (2006). The work is a web browser plug-in that transforms US dollar amounts on any web page into their equivalent value in crude oil barrels. The plug-in adjusts for the rise and fall of market prices, revealing oil’s real-time fluctuations to the user whenever they browse online, for instance reading the news or shopping. Like the vacillation of the dollar itself, these shifts are intimately connected to geopolitics. The work was originally produced in 2006 as the first artist-made plug-in, and Mandiberg has restored and updated the code on the occasion of Anatomy of Oil so that it operates properly with current technology.

Susanna Battin and Kate Kendall’s piece Gas-for-Water (2018) also addresses oil’s value through trade. The project began on a road trip from Lake Mead in Nevada to Los Angeles during California’s extreme drought. It imagines the plight of “meadmaids,” or mermaids whose livelihood is dependent on the lake, formed in 1936 when the Hoover Dam was completed. Set in a dystopian future where gas is plentiful but fresh water is scarce, the meadmaids exchange one for the other as they journey back to the lake and replenish its holdings. At a performance at the opening and later at Mentryville (the site of the first successful oil strike in California), the artists will dramatize the exchange of water for gas in a choreographed piece, the score of which will be on display in the back windows of the truck gallery, along with a hand-drawn map of oil extraction sites in the LA region. A limited-edition water bottle emblazoned with an intentionally misleading logo stating its contents as “Gasoline” will be available for sale, and the origin story of the meadmaids will be reprinted in the zine that accompanies the exhibition.

Whether imagining futuristic fictions, as in Battin and Kendall’s Gas-for-Water, or using petroleum-derived products in a collective pastiche, as in Molly Tierney’s Untitled, the artists in Anatomy of Oil rely on simple, poetic gestures to speak to oil’s omnipresence. The industry’s ubiquity, and simultaneously its strategic invisibility, intentionally normalize oil, making it appear inevitable and necessary. This aim is succinctly communicated in the widespread efforts to hide the wells from public view around Los Angeles. Anatomy of Oil resists oil’s assumed permanence, which is itself a fabrication.