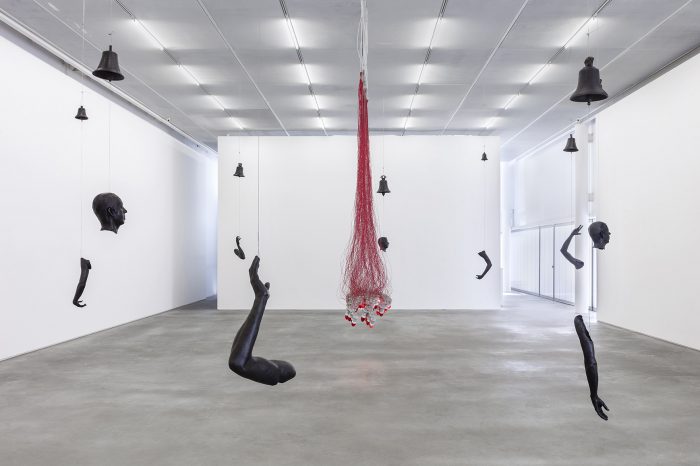 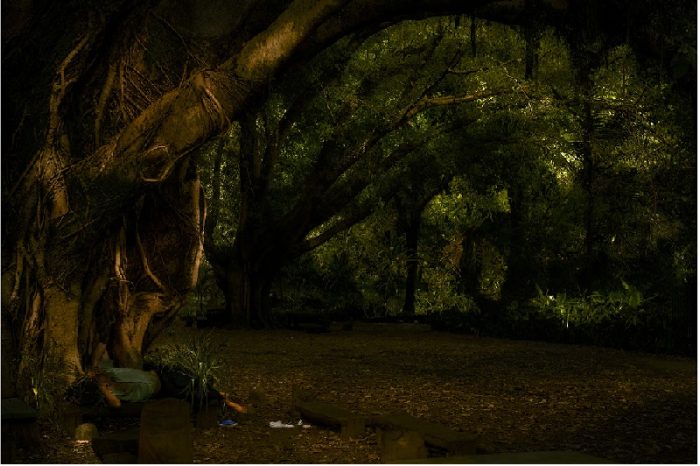 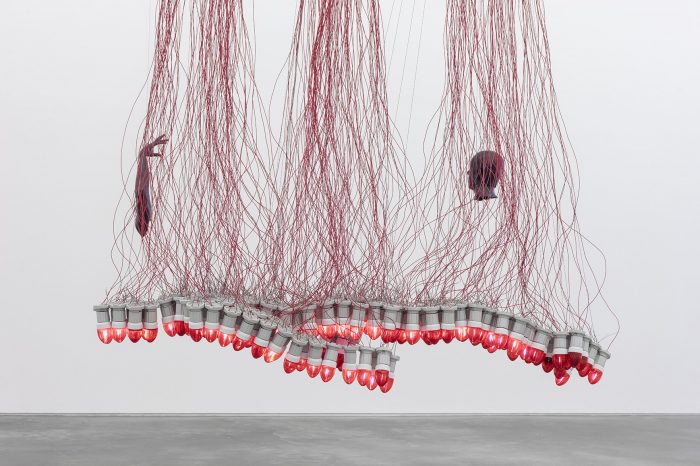 It’s What Your Arms, Lips and Voice Were Made For

Close your eyes for a few moments, as though they were breathing in a rarefied atmosphere, renew your nonverbal speech. This gesture is required to make contact with images arising from our experience with the contemporary, since the now is completed with ideas and images that arise at the moment when there is a blockage in the circumstantial field of view. Then take a nap to chase away hypnotic states that arise without our awareness, in the absence of what is important to life. Another way of closing your eyes is to blink, which works as a ceaseless invitation to the maintenance of the contemplative state, while also ensuring the lubrification of the corneas throughout the state of vigilance. The automatism that interrupts the vision can associate visible images, interspersed between one gesture of the eyelids and the next, with scenes preserved for immemorial time. The setup of Viver em um mundo abstrato [Living in an Abstract World] features a group of artworks that corresponds to the act of closing one’s eyes to rejoin disconnected parts of the body and of memories, like a rite of ecdysis in reverse. Heads with the eyes closed and bells that echo inaudible sound waves, disconnected arms that give caresses and try to hold what there is of the inestimable in the world – these are pieces of bodies in metal that present the wandering path, of distancing and approximation, which the work of Albano Afonso suggests as a means of access to the abstract contained in the power of base ten. Only the limitation of sensorial perception defines the abstract as an unintelligible image. Both close and far, the addition of negative and positive exponents indicates the loss of definition of what appeared to be precisely delineated in the world. Experiencing the abstract world, inhabited by figurations, instants and pulsations, occurs with the perception potentialized both toward the infinite and toward the infinitesimal. In this context, breathing and blinking work with the same purpose: seeking parts of bodies lost over the years, recovering them within the body/memory. Upon questioning the amount of bodies that we obtain throughout a lifetime, look long and closely at heads, arms and hands over which we assume temporary ownership, just like the veins that multiply and allow the pulse through the body, abstractions take form and become the experience of the eternal, which moves through the body of the artist, a manifestation that slows down stimuli and allows the shedding of skin without the experience of bitterness and anguish.

With silent landscapes, invariable marks of the passage of time, the artist arrives at an exercise of great simplicity, which consists in overlaying primary colors, able to create an infinite field of chromatic variations. The result, however, contradicts the multiplicity in question, with a flat painting that aims above all for the synthesis of the experience of the contact of matrices. As if the primary colors, by generating many others, could also annul them in a way that creates a body that serves only for the preservation of its own strength. The setup also includes a striking group of still lifes that operate as reflecting mirrors of desires. Coexisting with bells without their clappers, with disconnected arms and lines arranged to measure the infinite, a
mortal, motionless life runs through collages of scenes and objects found in different parts of the world, in a way that considers the abstraction that qualifies it, contained in small gestures, meldings of things nearly invisible to the hurried eye, along with entities that pursue the artist while he shifts through worlds that constitute his singularity. According to the idea that closed eyes promote the encounter of images that mark the contemporary, we should consider the hours spent in the production of the series of self-portraits as part of the process of the still lifes, understanding them as the tool for the construction of monuments of the moment.

Um dia na vida [A Day in the Life] is a twilight image, which combines hope and utopia. In the song “A Day in the Life,” a perpetual motion machine that lends its title to the image, the first line goes, “I read the news today, oh boy.” The interjection of the English phrase leads one to close one’s eyes for a moment. The reading is interrupted, with the added advantage of lubricating your corneas. After this, consider some action, no matter how simple, that facilitates the sheltering of the alterity in the world in which you live. Close your eyes to celebrate and to embody anonymous people who desire to echo existences pursued by the fear of the extinction that touches them. Should we return to the cover of the newspaper Jornal do Brasil? Will the air go back to being breathable? In the heat of the hour, in which existences are forcibly fragilized, arms, closed eyes and subtle voices contradict the idea that the abstract world in question is separate from protests demanding the right to life. Rather, it is transformed into a verb and strives to erect and structure affections. The repetitions of tonalities of the sky reminds us that looking into the distance will diminish our uneasinesses. “Tomorrow will be another day” and the day will dawn again, the poet tells us. When it takes place like that, we should consider opening our eyes slowly, so as not to dazzle the vision. Too much light causes momentary blindness to eyes accustomed to the dark. Perceiving the world with eyes half open strengthens our immunity to the perceptible.

With arms to resist, to struggle courageously, to hug, and to raise flags, to carry and write the world in which we live, “to hug your brother and kiss your sister in the street” or in the public square of Light, we should remember how much “living is better than dreaming.” In dark times, use your arm as a pillow beneath the tree while taking a nap, but remember to take care with the system that aims to fog the vision and transform living into a privilege.

I Don’t Wanna Wait For Our Lives To Be Over