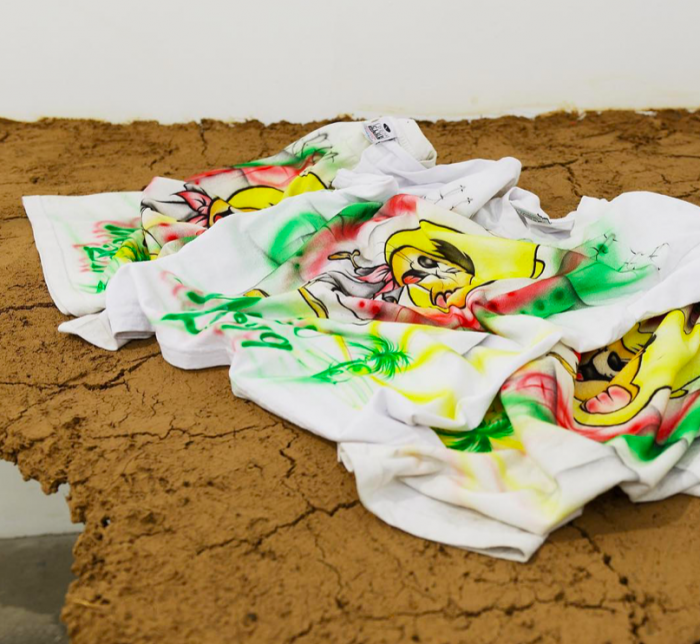 From among the fissures: review of nepantla and Una piedra rota no es dos piedras [A broken stone is not two stones]

The art of our days has been devoted to abolish certainties. The challenge and dismantling of categories, the means of production and the exhibition space were the starting point, but the constant mobility and precariousness have also taken up the core of the works, to the discourses that interweave them and to the ideas that go through them. The curatorial discourse is planted between the certainty and the unanswered questions: it raises new possible ways of reading, contextualizes, and unites elements.

In recent years, the curatorial practice has begun to occupy a privileged place in the world of contemporary art, but particularly in the comfortable space of certainties. One asked who was the curator before knowing who they would be exhibiting. Curators were thought of as certainty, since the curator is that infiltrator who finds himself with an ear on each side, between the artists and the public. If the curator was recognized, the exhibition already represented a certainty, beyond the artists or the pieces that figured in it. For the institutions, the curator had become their letter of introduction. But like any structure that solidifies in this not so firm land, its destiny is to, little by little, crack.

The curator will not disappear, but every day different projects that question the way in which the work has been carried out arise, proposing multiple ways of thinking and developing the act of curating. 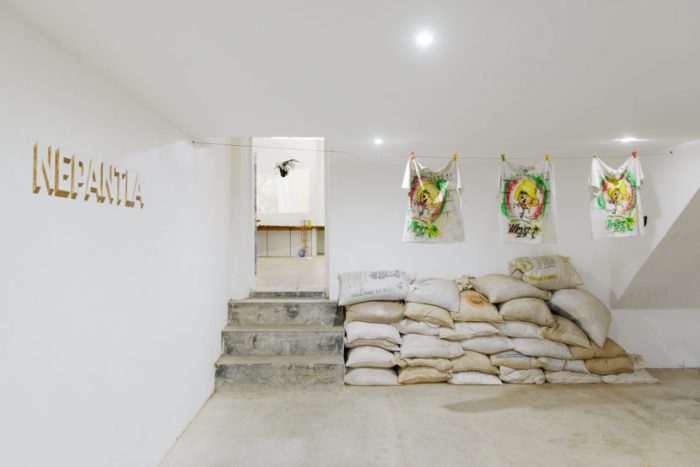 In the beginning of February, a couple of exhibitions were inaugurated in Guadalajara that play within this field: nepantla at Gamma Gallery and Una piedra rota no es dos piedras at Estudio Hospital. nepantla arises from the collaboration of the artists Rafa Esparza and Timo Fahler, who participated as curators and artists, simultaneously. The artists delimited the space of the gallery by structures that emulated three geographical delimitations in relation to the to the United States: the border with Mexico, the Pacific coast and the edge of the Panama Canal. These pieces were structures made with rods for construction and were covered with adobe. The borders delimited, in addition to the exhibition space, the field in which the pieces of the other seven artists, that Esparza and Fahler selected for the exhibition, were developed: Diana Yesenia Alvarado, Nasim Hantehzadeh, Mario Ayala, Karla Canseco, Daniel Gibson, Alfonzo González Jr. and Mar Citlali. The nine participating artists reside in Los Angeles, but they also share an ancestry from another country—from Mexico in its majority. Hence the title nepantla, a word of Nahuatl origin that means “in the middle”, a concept that relates and gives meaning to the exhibited pieces.

The structures of rods and adobe are located right in the middle of the walls, as a horizon from which the pieces are arranged and related. When being in the gallery, bewilderment is made present. The pieces are so interrelated that it is difficult to know which piece is from whom or if who exhibits is one or nine artists. But it is in this confusion that the project takes on its meaning: when those edges that cross the exhibition space function as a platform, as a territory for those who were born everywhere and nowhere.

Hence the dislocation of the curators: to curate is not only to select pieces that illustrate one’s thought, but, instead, it is to curate a space to rethink what one has in common, to situate oneself right there in the middle of nowhere, at both ends of the border. 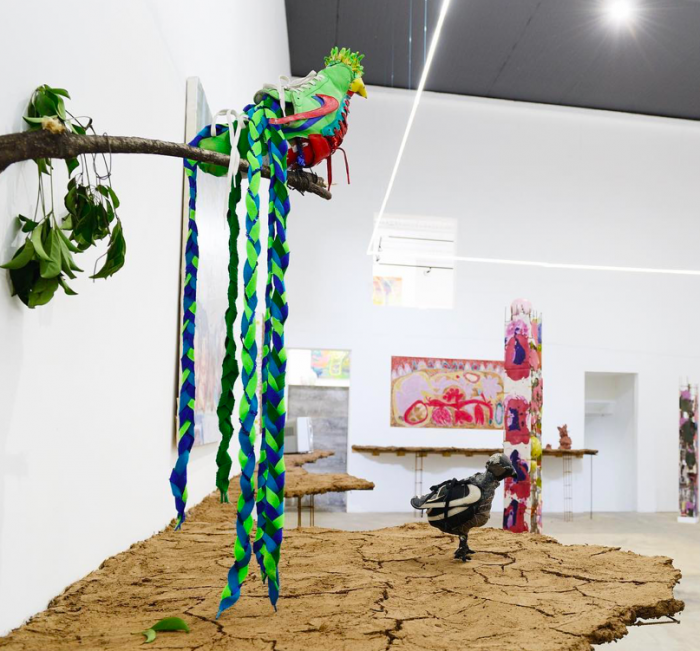 On one of the adobe platforms there was a television that played a video, a piece by Karla Canseco. In the video, cliché images of what apparently a Mexican must be were superimposed, as well as random homemade videos, mixed with the voice of the artist. With a lagged timing, in one dialogue in English and another in Spanish, the artist talks about what it means to be in between being Mexican and American, about having to respond to a culture that she simply does not recognize as her own. The piece appears as a dream that needs effort and attention to listen and understand what appears on the screen, but even so, there is a feeling that something is missing. As if in the confusion between image and sound was where the piece happens, in the “I can not fully understand”, such as the exhibition itself, as well as the experience of the selected artists who produced from that not belonging at all to neither of the two sides and consequently, or by elimination, fancy themselves in between.

In the case of Una piedra rota no es dos piedras, the curatorial process has been a long-term job. Faena, the name of the group that includes the artists Daniela Ramírez, Bruno Viruete, Ramiro Ávila, Napoleón Aguilera, Aldo Álvareztostado and the curator Paulina Ascencio, the participants of the exhibition, have been meeting, since the end of 2017, to think and discuss their pieces, readings and the work of other artists. These discussions sometimes end in exhibitions; for the first time, in July 2018, they intervened a bar with pieces that emerged from their readings of John Baldessari, and this time, taking as a starting point the book of poems by Luis Felipe Fabre, Cabaret Provenza, they mounted the exhibition at Estudio Hospital.

For this group of artists, the curatorial process was understood as mutual accompaniment. The exhibitions are not the main objective of Faena, but the outputs of what happens in the group discussions; they are not the end, but the means to continue with the dissertations on or from the referents that the group chooses. Again, the model of artists as producers and the curator as the one who gives meaning is questioned, and although there is the figure of the curator, Paulina Ascencio, the development of the exhibition takes place in a process of exchange, of community. 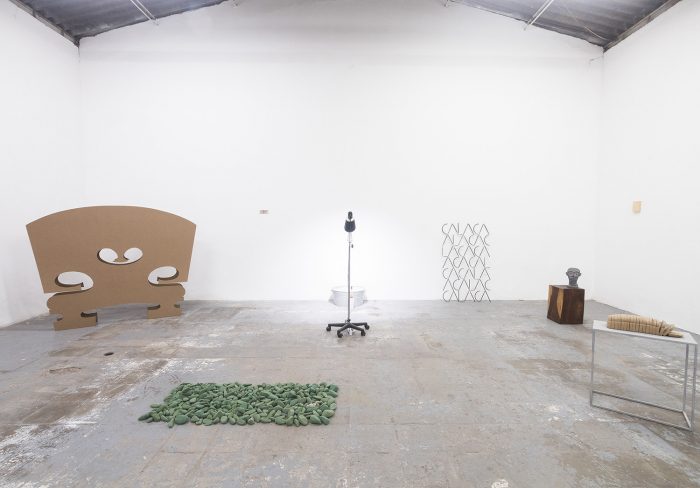 A particularity of Una piedra rota no es dos piedras was that the hall text of the exhibition was the same Luis Felipe reading a selection of poems by Cabaret Provenza during the opening, so the attendees had both the pieces exhibited and the poet, to find the threads that tense between the pieces and the verses.

Among the works stood out a large cardboard figure, the work of Bruno Viruete, whose monumentality and geometry resembled a pre-Hispanic deity (the poems continually refer to the pre-Hispanic world), but just on the opposite side of the room, the same figure was reproduced on a coarse gold leaf—which actually was the laminated paper that covers the top of some beers—on a small wooden panel. In this game of dimensions, between the cardboard monument and the golden miniature, Jack Mendoza was revelaed, the seller of bibles, a character in some of Fabre’s poems, to whom his life was not enough to learn to play the violin. The figure that reproduced the two pieces was no more than the bridge of a violin, which as a tribute and commemoration of the frustration, of that to which he is very close but yet so far, Bruno Viruete built.

The poems of Luis Felipe Fabre are plagued by these ambivalences, as are the pieces in the exhibition. At the center of the room, a set of green river stones formed a rectangle on the floor. When one approached the piece, one found that the stones were made of oasis (the foam in which the flowers are stuck once they were cut so that they continue to receive water) and were hand-carved one by one. Un camino es un río, a piece by Daniela Ramírez, takes up one of the constant elements of Cabaret Provenza: the stones.

One of the poems says: “The stones have never been alive: the stones are/ something to be born”; the stones are like that object where all the stories are possible, but none is. Daniela Ramírez’s piece is placed in this possibility, using a material that like stones is pure potentiality, but on the contrary, has the characteristic that it deforms, breaks and crumbles at the first contact. A double space of possibility: as a representation of the stones that suppose a river after them and as a presentation of a material that is revealed in the moment that it disappears behind the flowers. If the stones were river and water and movement, Un camino es un río will be the illusion of all that, but with thirst instead of river and water, and total stillness by movement.

nepantla and Una piedra rota no es dos piedras are two fissures that open as ways to think about the curatorial practice today, to use the exhibition spaces as meeting places, where the only certainty is that everything is vulnerable, gives way and is ready to fall. 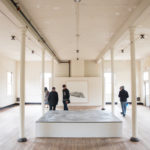 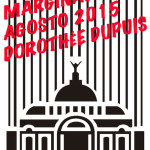 Drive-By-Art (Public Art In This Moment of Social Distancing) 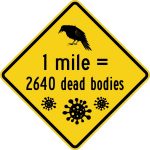