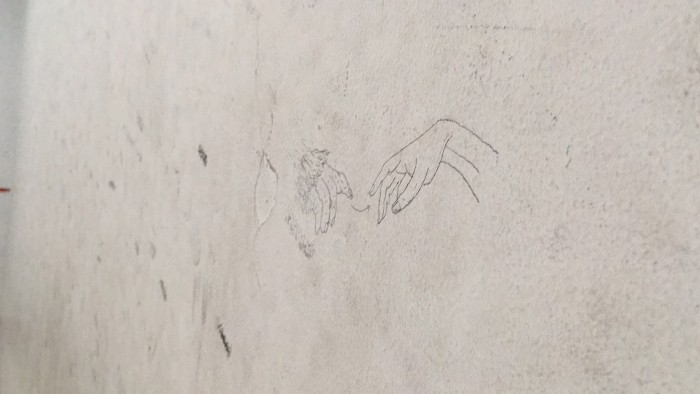 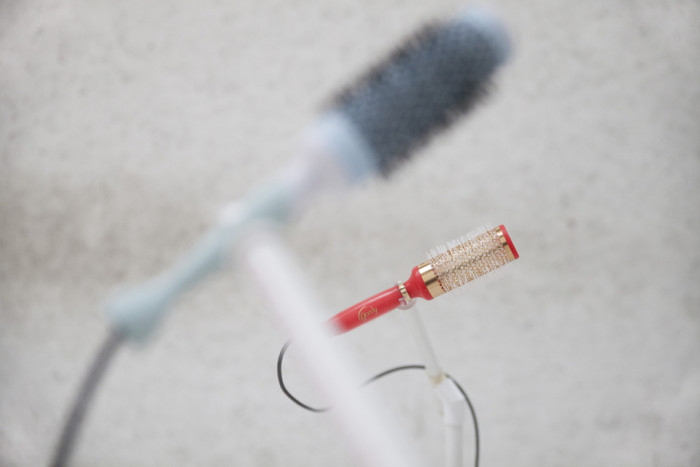 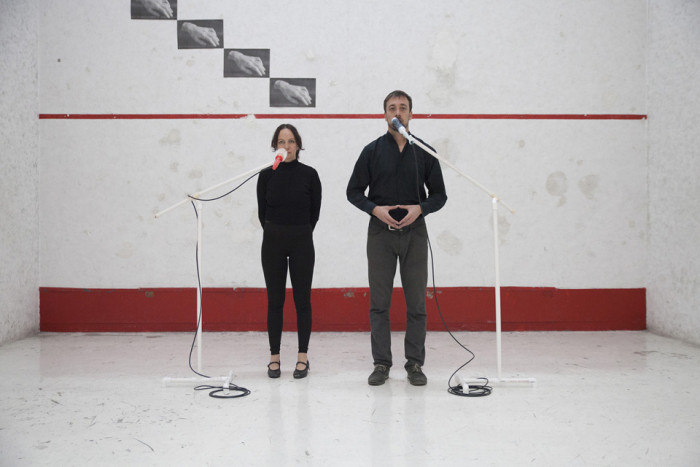 Interested in silences, pauses, the invisible and in the dissonances that participate in the writing of history, María Isabel Arango (Medellín, 1979) has developed Los gestos muertos [The Dead Gestures], a visual research project that performs a sort of dissection of the testimony by focusing on the portraits of Colombian politicians while they deliver speeches during the recent peace process with Colombia’s Revolutionary Armed Forces (FARC) –the very same process that now exists as a frustrated and futile attempt after it was rejected by the South American country’s population (even if only by an incredibly small margin).

Making use of newspaper and magazine clippings, web image searches, and exploring different archives and libraries, Arango gathered a vast collection of images that mostly depict politicians discussing the peace process. These were later classified and catalogued according to the intention denoted by the gesturality of the depicted person’s hand(s): persuasion, modesty, temperance, conviction, threat, reiteration, among others. The orator disappears from the image once the artist isolates his or her hands and the frame is strictly focused on these: as the gesture is emphasized, the referent becomes absent. Even if the voice, the testimony, has no space within the photographic register, in here, the image fails to connect the spectator with that which has not been possible to see with his or her own eyes.

Given that the peace process took place behind closed doors, this visual compilation replicates to a certain degree the spectatorial experience lived in said country: the discussion dominated the public sphere yet the only way to gain access to its progress –or the lack thereof– was through the press itself or via the official government reports. Once again, the process was carried out, in its entirety, in an absolute secrecy that was apparently necessary for it to continue. Therefore, the Colombian population lived this process in two separate registers: the first, on a visual level, and the second one, through the written word. Herein lies the conceptual point of departure of Arango’s project, the emphasis on the fact that the writing of history –political or otherwise– happens based on the dissociation of politics itself as a performative act, hence the result is nothing but dead gestures.

In Lines: A Brief History (2007), anthropologist Tim Ingold carefully unravels the way in which societies built under a Western conception have undergone a long process of dissociation of the voice from corporality. He delves into different domains –theater, music and, I suggest, politics– to grant primacy to the written language as the main, if not the only, support of history. Consequently, the dismembering of politics as performance, as a form of playing a role, may be read as a violent act in which orality, gesturality, and the written language will follow different paths and, of the three, only the last will survive.

Ingold’s reflection starts by wondering about the presence of lines in almost any human activity, that is, how a fair number of actions are conformed by the tracing out of a line that would afterwards become (or would be disciplined) into a straight line. The writer suspects that such “linearization” is spawned from Western writing and its straight linear character. Curiously enough, his research derives from his inquiries about the estrangement of voice from words; that is, when we speak and think about discourse, we make reference to its existence as written words. “Yet we have somehow arrived today at a notion of music as ‘song without words’, stripped of its verbal component. And complementing that, we have also arrived at a notion of language as a system of words and meanings that is given quite independently of its actual voicing in the sounds of speech. […] The search for an answer led me from mouth to hand, from vocal declamations to manual gestures, and to the relation between these gestures and the marks they leave on surfaces of various kinds.” [1]

Ingold explains that, in the modern era, music was purified of its verbal component and language of its sound component. According to him, it is the composer’s task, as much as the writer’s, to inscribe graphic marks of one kind or another onto the paper’s surface. The voice is merely an interpretation of whatever has been written: at an abstract level, words, as their meaning, do not lie on it. What happens then with the timbre, tone, and rhythm? Within music notation, they have survived as indications marked by small symbols, becoming then mere adornments of the voice. And with stammers, hesitation, repetitions, and silences within political speech? Once the voice is left out of the field of oratory, its inflections shall remain forever inaccessible –the intentionality that is revealed by its interpretation of words is relegated from history. The violence contained not only in speech on paper but in its representation disappears together with the ephemeral elements of voice and gesturality: the dead gestures are joined by a writing that does not speak.

It is by emphasizing the loss of voice that The Dead Gestures is not a project interested in the restitution or rediscovery of the intentionality with which one or several speeches were delivered. Rather, it situates itself in a position that fully assumes a crisis in representation. In “The Intolerable Image” Jacques Rancière claims that “[r]epresentation is not the act of producing a visible form, but the act of offering an equivalent –something that speech does just as much as a photograph. The image is not the duplicate of a thing. It is a complex set of relations between the visible and speech, the said and the unsaid.” [2] These are the tensions propelling Arango’s project through a series of registers that evidence both what is seen and what is not seen in the peace process. For example, what does a fist hitting a table witness or hide?

The isolation of the gesticulating hands of the orators provokes a Brechtian rupture. These apparitions out of context, as well as the improvised execution of an absurd choreography arising from the navigation within more than 350 images, open up a space in which to interrogate the forms through which history is transmitted in Western-shaped societies (where writing is the privileged medium for the transmission of memory). The rupture or estrangement is reinforced by the sudden appearance of hands that inhabit contexts apparently unrelated to the grand decision-making of politics and its ideal of representing a people (I would like to suggest here that, in this case, to represent also means to affect): The hands of a woman breaking an egg, a man’s dirty hands and fingernails impregnated with soil and dust, a hand-cuffed person, and a few other hands in marble that suggest a praying gesture also become part of Arango’s selection. Despite the faces being left outside the frame, The Dead Gestures is inspired by the Colombian context yet it proposes a more abstract analysis that could easily be applied to many other geographies where inequity prevails. In whose hands, literally, is the power of doing politics? The consistent repetition of hands gives us some clues regarding gender, race and economic strata of those individuals.

A pointing finger, a contorted hand, a firm handshake: as mentioned by Ingold, gestures leave marks on different kinds of surfaces. That is, they do not leave physical inscriptions but their movement is aimed at the spectators’ psyche. It is interesting that gesturality, producing such a strong impact, does not succeed in surviving the passing of time.

The image archive from which The Dead Gestures departs is built as a constellation in which, in the words of Walter Benjamin, past and present are fused to produce sense. The hands are not a testimony but a simultaneously silent questioning of the structures under which history is built. Can that which is embodied be considered history, knowledge? The Dead Gestures turns itself into a journey through the peace process by undertaking a rhizomatic wandering which follows the death drive of the archive: its holdings show nothing but pauses, silences, and empty spaces.

For the second iteration of the project, somewhat of an experiment in exhibition-making, Arango decided to create a choreography –in collaboration with Andrea Chirinos– inspired on her image archive. The squash court in which the performance takes place becomes the perfect scenario to stress the idea of politics as a play, a game to mess around with its pre-established rules. The gestures’ vacuity makes itself evident in it: the hand movements are repeated incessantly, they become accelerated and they slow themselves down —they turn into signs with no signifiers. The failed transmission of gestures and voice alike is reinforced by the microphones placed in the exhibition space which are, in turn, sculptures made of domestic materials. Their stands are made of water pipes and the microphones are actually utensils incapable of transmitting the voice: hairbrushes, dish and toilet brushes, aluminum fibers, and scourers. If the image archive refers to politics as a practice predominantly executed by men, the sculptures –a maladroit exercise of assemblage art and bricolage– conversely point to a predominantly female practice: domestic labor. The sum of all elements –the archive of hand images, the choreography, and the sculptures– emphasizes a great number of fractures. If the archive generated dead gestures in the first place, its mise-en-scène points as well to the absent voice.

Following the tune of a negative history is how I understand the compulsive collection of the thousands of press images by the artist. In Hito Steyerl’s words, “it is a misunderstanding that cameras are tools of representation; they are at present tools of disappearance. The more people are represented the less is left of them in reality.” [3] Witnessing and the documentary are certainly on the fringe of a crisis. María Isabel Arango does not attempt to restore a lost faith in these practices but hints at the many processes that make the transmission of historical memory not only a failed process but also a violent one. 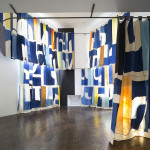 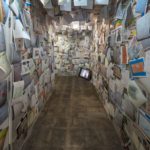 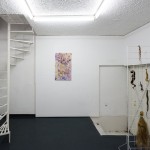 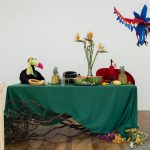