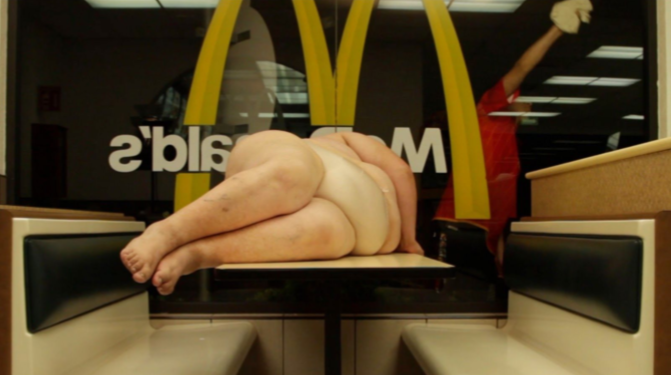 Poder [Power] is the name of the monographic exhibition by Mexican artist Yoshua Okón (1970). An exhibition that was inaugurated on April 10th, 2019 in the Galería Artes Visuales of Matucana 100 (Santiago de Chile), and that deals with the multiple social incarnations of power in the 21st century, especially those that are generated after the rise of governments of ultra-right to a post-capitalist Latin America. “The return of conservative governments, in a time dominated by corporations, has generated different mobilizations of the sectors affected by their skin color, their sex/biological condition and their place in the social scale”, explains the artist.

The Mexican artist proposes epoch documentation in which the notions of order, State, consumption and borders are the protagonists. The eleven works, in video installation format, photographs, photo installation, installation and sculpture, play parody in a crude manner. Proof of this are works like Chocorrol, which shows a Mexican dog, mounted on a pedigree dog (metaphor about the cultural gap between races and ethnic groups), or the image of a naked and morbid body on a McDonalds table, entitled Freedom Fries. The exhibition includes the work Chille inspired by the replica of the dictator Augusto Pinochet’s funeral, which the artist found in a neo-Nazi bar in Santiago.

“I think these strong nationalist tendencies are ironically a weapon that, in a very perverse way, the transnational corporations have been able to use for their own advantage. Although it may seem like a contradiction, in reality the system of global neoliberalism could not exist if it were not for the facade that nationalism offers. Chile is a perfect example of this global situation, since ironically it was the ultranationalist regime of Pinochet that laid the foundations of neoliberalism in the country,” says Okón.

For the Mexican artist, each work proposes the spectator to witness an era, taking a physical and emotional position in front of situations that affect us and reproduce them as subjects within a complex social plot. Okón’s work is characterized by being quasi-social experiments performed for the camera where acted situations, documentation and improvisation are mixed, questioning the habitual perceptions of reality and truth, individuality and morality.