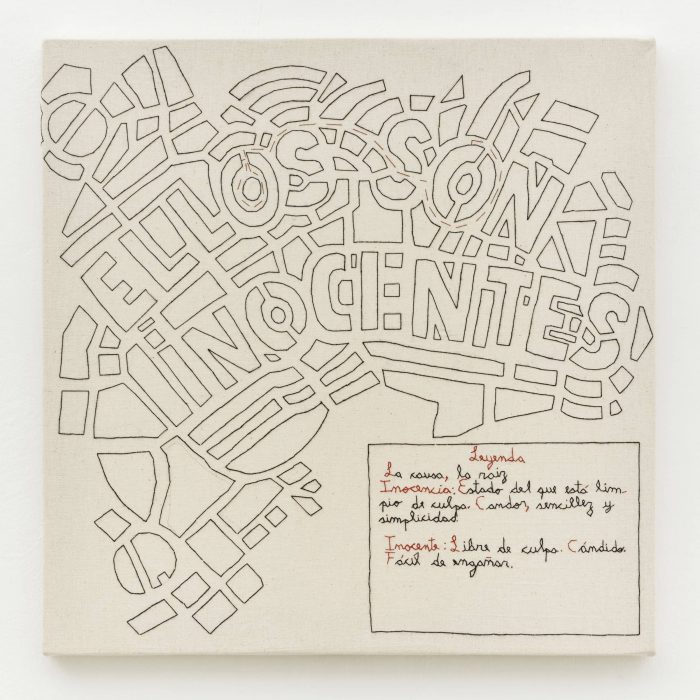 La luz de la oscuridad, Peruvian artist Nereida Apaza’s first solo exhibition at the Galería del Paseo/Lima, curated by Élida Román, shows works produced by the artist during the quarantine months in Peru, after returning from London where she was a guest artist in residence at the Santo Domingo Centre of Excellence for Latin American Research of the British Museum.

In La luz de la oscuridad, Apaza shares a visual testimony of the times of uncertainty, doubt and obstinacy, resisting the submission of his sensibility, and finding possible meaning and hope through the persistence of the image and the fragility of the words.

The exhibition consists of a series of works built around a visual axis—seed, egg, tree, flower—each of which carries a symbolic charge and a poetic expression of an intimate and meditative nature. Her work is dominated by the technique of embroidery on canvas, complemented by short poems written by her.

It is important to mention, and a starting point for the works indicated above, the series La causa, la raíz, a set of eight works embroidered with urban map designs that contain forceful inscriptions of segregation and marginalization, feelings that are even more evident in times of health crisis.

The exhibition can be visited from August 18 to September 19, through our new Viewing Room.

The gallery will also be visited by appointment, under strict biosecurity protocols. Appointments will be booked at least one day in advance by writing to lima@galeriadelpaseo.com, Monday to Friday, from 12 to 2 pm and from 3 to 7 pm.

Nereida Apaza (Arequipa, 1979) graduated from the Carlos Baca Flor School of Art. Her work is presented through various techniques such as sculpture, artist’s notebooks, video art, painting and engraving. Among her individual exhibitions are Vivir in the Peruvian-American Cultural Center (2019), El tiempo es un mito in the CC. Chaves de la Rosa (Arequipa, 2018), and El fuego de los niños in the Convento Santo Domingo-Qoricancha Museum (Cusco, 2010). Her short animation film Historia Secreta was one of the winners in the competition of experimental works of the DAFO (2019). She won the first prize in the national painting contest of the Central Reserve Bank of Peru (2012), among other recognitions. In 2019, she did a residency in London invited by the British Museum’s Santo Domingo Center of Excellence for Latin American Research.