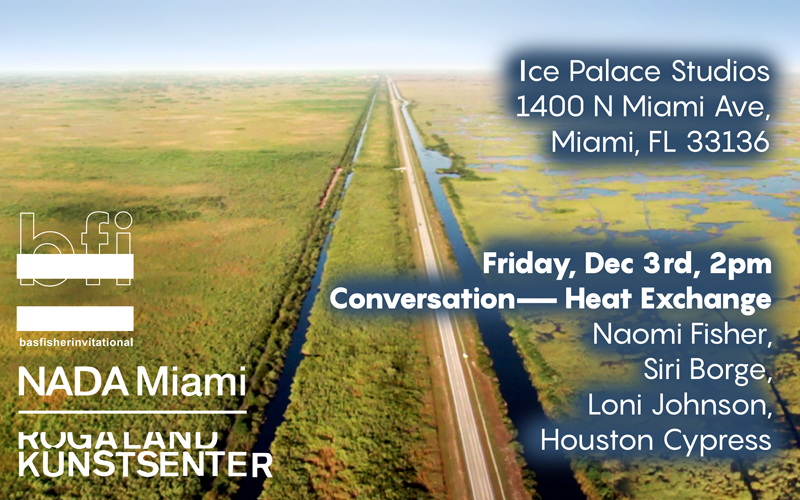 Bas Fisher Invitational (BFI), Miami, Florida, and the Rogaland Kunstsenter (RKS), Stavanger, Norway are co-presenting a booth at NADA Miami to showcase the work of the six artists participating in Heat Exchange, a new reciprocal residency program offered between the organizations. The booth presentation includes works by Loni Johnson, misael soto, Houston Cypress, Siri Borge, Hanan Benammar, and Máret Ánne Sara. This panel conversation will feature three of the artists involved, and Naomi Fisher, director of BFI. The speakers from Norway and Miami will compare and contrast our differing arts ecosystems, which are defined by unionization and privatization respectively, and identify lessons to learn from each world of arts and culture funding.

Artist communities in Norway have a unique history. The unionization and political initiatives of UKS (Unge Kunstneres Samfund/Young Artists’ Society) started a century ago in 1921, 48 years before the country discovered it’s lucrative oil reserves in 1969. When Norway became a wealthy nation as a result of their taxation of the oil industries, artist communities were organized and prepared to advocate for aggressive public funding programs.

In Miami, the art community’s association with Art Basel has influenced our community to grow in a way that understands a commercial, collector driven, privatized art world as the primary support structure for life-long practice. Fortunately Miami’s global artistic relevance has been anchored by a supportive cultural affairs department. BFI and RKS believe that local artists can advance this infrastructural-level supportive work after learning how Norwegian artists have self-organized for over 100 years.

Open thru Oct. 9.
Thursdays to Saturdays or with appointment

Listening party
Tracks from the album of the same name and an improv around the show
Saturday from 12 to 7pm
Praga 35, Col. Juárez
Mexico City

Mónica Heller to represent Argentina at the Venice Biennale 2022