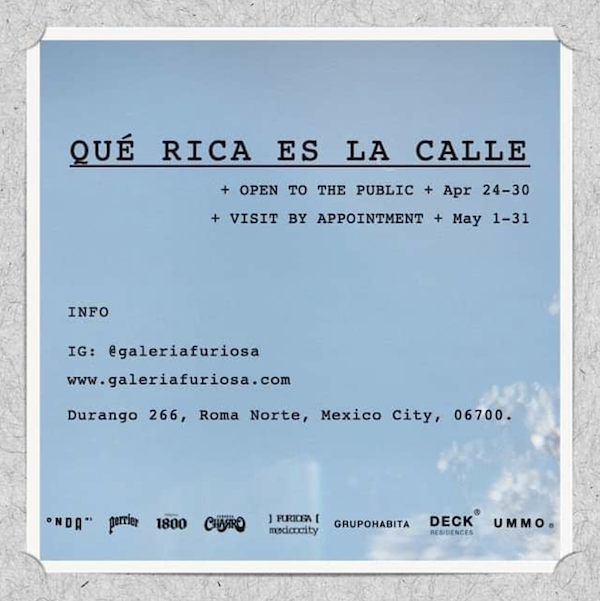 In the heart of the emblematic Colonia Roma, FURIOSA positions itself with a forceful artistic proposal, translating the latest pulse of Mexico City’s creative scene into a cutting-edge curatorial effort.

FURIOSA stands as a gallery-concept that bets on a hybrid formula where the work and its exhibition environment generate a synergy of high creative value.

Urban dynamics allow us to contemplate a connection between places and images that go beyond what appearance represents in the collective imagination. It’s enough to wander, even if just for a brief moment, through the streets of the city to see a set of factors that revalue and produce a reaction of identity and social cohesion that serve as testimony of a quasi-abstract experience.

QUÉ RICA ES LA CALLE is an exhibition that shows the extraordinary resources of living in the great megalopolis of Mexico City, where cultural, social and economic factors become intrinsic elements of the absurd and, in parallel, codifies the perverse relationship that occurs between the different exclusionary processes where the city dissolves in the sarcasm of what it means to “inhabit”.

The exhibition and its curation confront the viewer in “disarticulated” points of the city, as it extracts every condition revealed as a fetish and seduction object, granting an opening to the urban experience that is lived as a result of the daily walks and that can be described through firsthand street emotions that delve into the adventure of the unknown. The imagined city is captured from light and darkness, as well as the unfulfilled desires of its own essence–particular and unique, complex and absurd, majestic and decayed–, which are conveyed in a framework of the everyday and the usual. It’s a city of stories and journeys that transit and vanish in its own incoherence, where past, present and future are confused and create “realer realities” that replace the adventure of describing the improper qualities of an almost imperceptible city.

Material is thrilled to present the first edition of its traveling Mexican fair, Estación Material

From October 28th through the 31st
Cerámica Suro in Guadalajara, Jalisco

BFI presents at NADA Miami: A Requiem from a Reindeer By Siri Borge