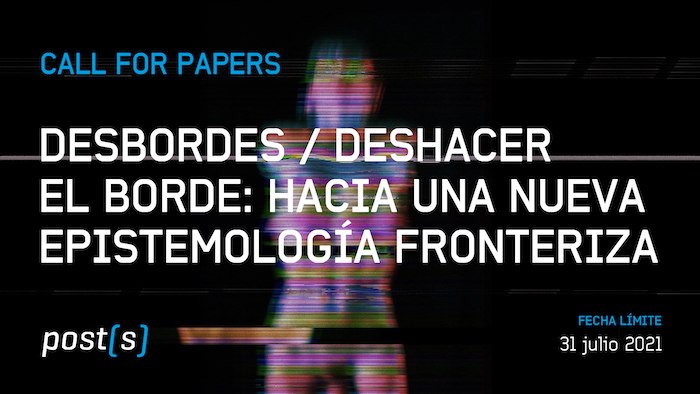 In which ways can artistic practices undo borders? What does an undoing of borders entail? What type of new border epistemologies arise in interstitial spaces?

This issue of posts(s) provides a space for explorative investigations of different approaches to borders, borderlands, border knowing, and the undoing or unknowing of borders, focusing on interactions between material and immaterial manifestations of the border and the various forms of medial, visual, literary, and other cultural expressions.

The papers in this issue thus may address a wide spectrum of topics and questions concerning borders and desbordes: queer borders, posthuman borders (between nature/culture, human/machine/species), im/material borders, intersectional borders (between race/ethnicity, class, sexuality), etc. What visual forms speak to the many lived border experiences? How can borders be undone? Which cultural artifacts form part of border cultures and border imaginaries? What forms of cultural hybridity, of “multitemporal heterogeneity” (Canclini 1995) occur in borderlands which have the power to undo borders? In which way can cultural practices then constitute powerful counter-formations to the view of borders and border regimes as infrastructural events, technological operations, and forms of “border bricolage” (Dijstelbloem 2020), that is assemblages of various human actors, technology, and surveillance apparatuses? In other words, we are interested in the creative and subversive potential of bordertextures and the multilevel encounter of surfaces of border cultures and the many ways in which they serve as powerful decolonial practices.

Full text: Call for papers
Questions may be addressed to posts@usfq.edu.ec

Have you heard of the Museum of Contemporary Art of Querétaro?