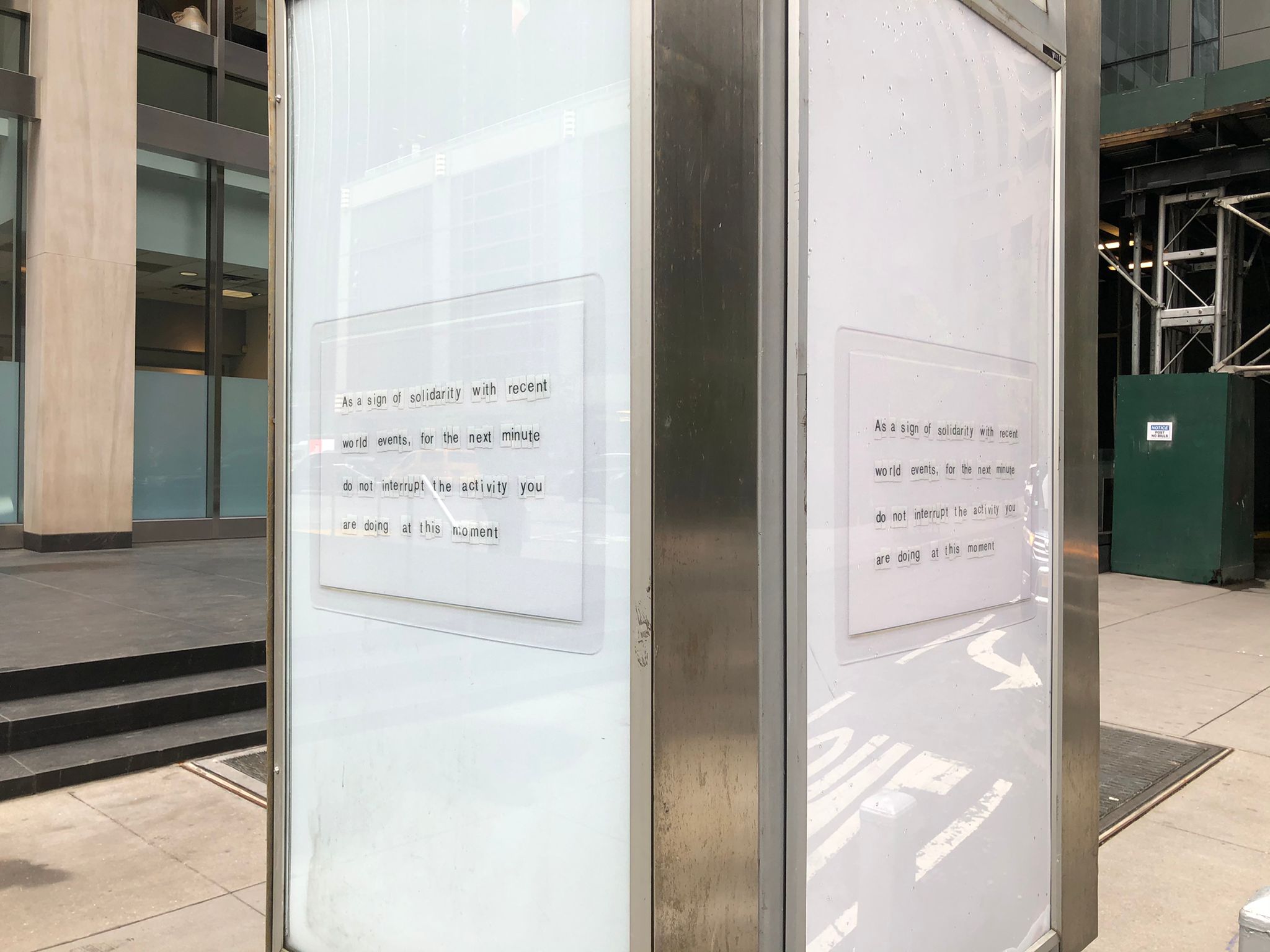 For the third project in TITAN’s solo project series, Roman Ondak presents Announcement, 2003, a work that seamlessly transits the invisible line between conceptual art, performance and instruction. In Announcement, a placard placed on all three sides of the kiosk asks viewers for their complicity in a performance of non-performing. Created from a collage of cut letters, pasted as ransom, it states: “As a sign of solidarity with recent world events, for the next minute do not interrupt the activity you are doing at this moment.” This invitation to passerby to suddenly become part of an artwork, is one of the many ways Ondak develops intimacy with people he will never meet, involving them as actors in his work. As a subtle intervention into everyday life, and imagination, Announcement blurs the line between creator, producer and a  subversive sense of space.

Ondak’s work plays with ideas of  relocation, representation, and the  duplication of experience, shifting and sharpening the viewer’s  attention to everyday life. Growing  up under the communist regime  of former Czechoslovakia, the  artist became attentive to systems  of inclusion and exclusion that  ordered this particular society.  Questioning the failure of the communist structure in his work,  Ondak explores the potential for  different orders—new patterns  of behavior, and ultimately, alternative social and political  possibilities. His work is often  quite subtle, infiltrating the  spectator’s surroundings in  imaginative and quiet ways,  suggesting a renegotiation with  reality. Adopting an almost  anthropological approach,  he recombines aspects of the  quotidian with his incisive  artistic wit, opening up space  to challenge the rules of the  everyday through his poetic  alterations. Ondak’s work is  not only curious about the  rituals and assumptions that  govern our lives; he is playfully  interrogative of the art system as  well as society at large, urging  us to greater awareness. Roman  Ondak is represented courtesy  of Esther Schipper, Berlin; GB  Agency, Paris; Galerie Martin  Janda, Vienna; and kurimanzutto  Mexico City / New York. A  variation of Announcement,  was previously exhibited at the  Kölnischer Kunstverein in 2002.

The second phase of TITAN,  continues as a solo project  series in a solitary phone booth,  conceived by the artist Damián  Ortega and Bree Zucker. Initially launched as a group exhibition, the TITAN project now begins  a new stage, focused on a single  kiosk, like a pin on a map, at the  corner of Sixth Avenue and West  53rd Street in New York City.  During the course of the year, six  individual voices will each present  a solo project, using the phone  booth kiosk as they see fit.

The TITAN project takes as its  premise that a gallery may exist as  an open space, free for all viewers,  at any hour, even in the middle  of the night. It aims to open a  space for experience, imagination,  and dialogue during a decisive  time of great potential change.  Like a newspaper, or public  bulletin board, the solo series  of the TITAN project continues  kurimanzutto’s ongoing dialogue  with a broad audience in the public  sphere. Since its inception in 1999,  kurimanzutto has consistently  promoted projects and exhibitions  outside of a traditional white cube  to stimulate cultural dialogue.  Previous projects have included  exhibitions and performances in  local markets, floating gardens,  parking lots and airports, alongside  the recent billboard project Sonora  128, in Mexico City. TITAN  marks the first citywide project by  kurimanzutto in New York.