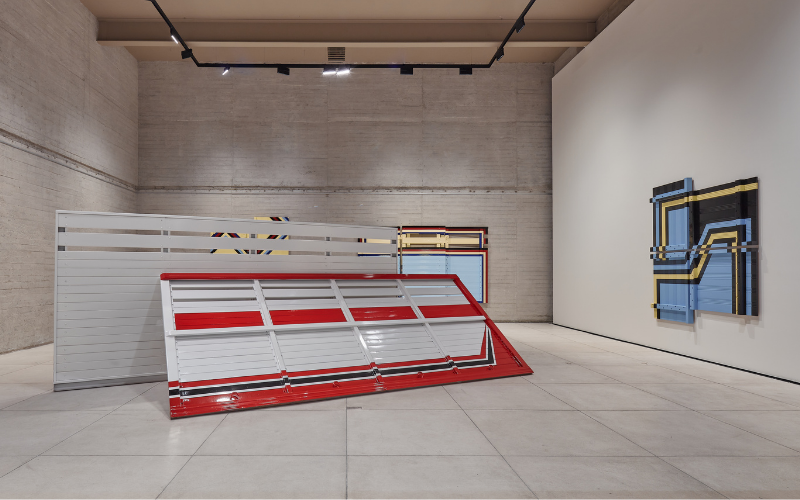 Galería RGR is pleased to present A veces las cosas funcionan por las razones equivocadas [Sometimes Things Work by the Wrong Reasons], by Guatemalan artist Darío Escobar and curated by Daniel Garza-Usabiaga, which includes works that are part of the series Geometric Constructions and Modular Constructions, made from 2012. Through a formal and conceptual research, within the territory of the pictorial, the artist offers a critical and incisive reflection on geometric strategy. Escobar’s starting point is the Latin America’s “popular culture”, which dialogues with the “universal” geometric art history. From this encounter, some questions arise: How we can define “the cultured” and “the popular”? Who is in charge of defining them?

The pieces included in this exhibition examine the geometric abstraction of the second half of the twentieth century, and use as its starting point the designs in the boxes of the “redilas” trucks: commonly known vehicles that transport fruits, vegetables, passengers, textiles and materials, from distant places to the business centers that sustain the economy of some regions of Mexico and Guatemala, among others. That frameworks tend to be painted with clearly delimited bands of color that they play with horizontal and diagonal lines.

Regional references in Escobar’s works highlight the presence of a broad and shared aesthetic sense, that seems to express itself in a —roughly speaking— intuitive way, within the kind of design that runs on top of the rack boxes and on countless everyday objects and surfaces, such as the facades of some houses, visible throughout the Latin American territory.

Through this research, the artist showcases a proposal for geometric abstraction, which originates in the attention to a non-specialized practice, in contrast with the highly intellectualized processes that generally have defined this kind of painting in Europe and the United States throughout the twentieth century. With this, Darío Escobar questions the solutions that are recognized or have been institutionally legitimized as valid forms of abstraction geometric and those that don’t. At the same time, his structures, colors and shapes are mixed to make us reflect on whether the promise of modernity — that was so desired in Latin America— hasn’t come yet, or if it has already arrived and went unnoticed.