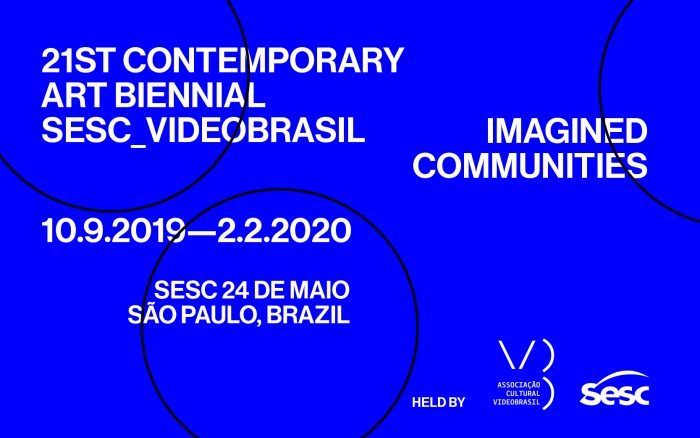 The presence of nationalism as a means to understanding the disputes that mark our time. That is the background of the 21st Contemporary Art Biennial Sesc_Videobrasil | Imagined Communities, which will run from October 9, 2019 through February 2, 2020, at Sesc 24 de Maio, in São Paulo, Brazil comprising over 60 works of art and two collections, 55 artists from 28 countries, among video, painting, photography and installation.

The artistic director Solange Farkas, the trio of curators Gabriel Bogossian, Luisa Duarte and Miguel López and the members of the selection jury Alejandra Hernández Muñoz, Juliana Gontijo and Raphael Fonseca analyzed together 2,280 submissions from 105 nationalities to select works from Brazil, Latin America, Africa, Asia, the Middle East and Oceania. To these and so many works are added projects by five guest artists

The 21st Contemporary Art Biennial Sesc_Videobrasil | Imagined Communities borrows the title from Benedict Anderson’s classic study to reflect on forms of social and community organization existing beyond, on the fringes or in the breaches of nation states: religious or mystical communities, refugee groups uprooted from their original land, clandestine, fictional and utopian communities or those constituted in the underground worlds of bodily and sexual experiences.

That is the horizon featured in the works by artists from indigenous groups or original peoples that deal with the issues present in the making and representation of those cultures in art and the world, in works that address the queer/LGBT universe, racial issues and border conflicts. The Biennial is divided into three platforms: exhibition, public programs and publications.

Spanning over 35 years of existence, the hitherto called Contemporary Art Festival Sesc_Videobrasil takes on the name of Biennial, joining the international Biennial calendar and strengthening its position in the global visual arts scene. For Videobrasil director Solange Farkas, rather than a mark of periodicity, “the term Biennial reflects the perception that our investigative practice brings us closer to the role played by international biennials such as those of Sharjah, Cuenca, Havana and Dakar.”

For the regional director of Sesc São Paulo, Danilo Santos de Miranda, “Sesc is charged with reflecting and mediating multiple perspectives through cultural action devoted to casting off shackles inherited from the colonial past and imposed by a peripheral geopolitical condition. The curatorial selection of the 21st Contemporary Art Biennial Sesc_Videobrasil brings together artistic experiences engaged in conceiving the commons and its respective ties from non-hegemonic elements and commitments.”