Based on the synergy between flesh and stone present in two photographs by artist Laura Aguilar, curator Marco Antonio Flores proposes a rethinking of hegemonic ways of seeing, while recognizing, through a queer poetic, intrinsic vulnerability of inhabiting and making bodies present. 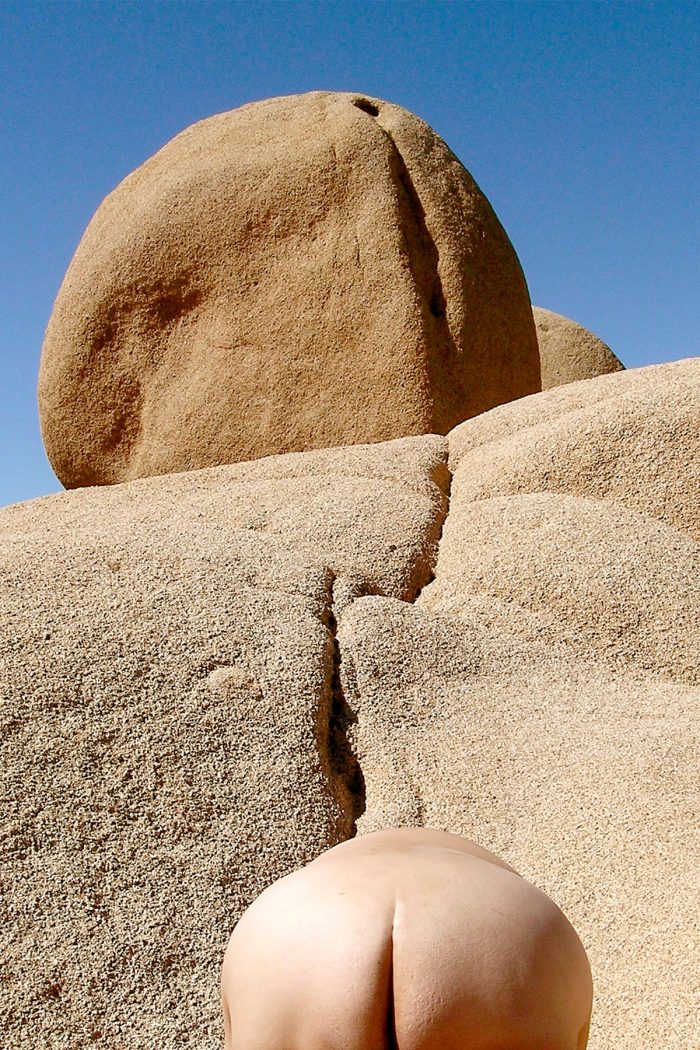 Let us begin slowly. Running along the dents of the stone, a curvaceous line splits the photograph. A jagged scar runs along the contours of the boulder, its circuitous movement leads to a scenic landscape: looming boulders, rocky forms, and surfacing shadows. At first glance, if we deviate away from the jagged line, towards the horizon, we are drawn to an expansive assemblage of stones. There are weeds growing too, but the largeness of the boulders takes precedence. Going further into the photograph, the sky illuminates the landscape. Shadows emerge along the surface of the smoldering rocks as the blazing sun resides above. Even without color, the textures of the photograph are vibrant.

Let us return to the serpentine line and trace the photograph from the bottom center. The line illuminates a splendid sense of movement adding texture and depth to the boulder’s asymmetrical outlines. We may even claim to feel them in flesh—afterall, who does not have memories of the rough and smooth textures of stone? Following the line, its dents and fissures, we arrive to two stones. If we slow down our gaze, we see the abstract stone-forms taking shape. At the center of the photograph, contours and shadows oscillate between stone and flesh. What bodies have taken presence before us?

Aguilar explores the body as a way to decode social constructions of identity and to expand corporeal form in more infinite ways.

The image is abundant yet it requires a stillness. Light, shadow, stone, and flesh must all be sensed anew. In this time of the rapid circulation of information and the proliferation of images on social media, Laura Aguilar’s American Grounded #106 offers a moment of suspension. What are we looking at? The mind is quick to want to assign meaning but perhaps by “slowing down” we may find a more playful way of looking—one where the viewer must remain still in order to sense the movement propelled by the image.[1] In the case of this photograph, we are allowed to witness the subtle revelations that emerge as the contours and creases of stone gently unfold. Ultimately, we allow slowness to become a mode of inquiry that refuses the hyper-accelerated gesture of clicking, tapping, and scrolling. So, I return to the question: What are we looking at? What has this photograph set in motion?

Ruminating along these stone-bodies, the line allows the viewer to witness what may have been missed at first glance. Facing away from the camera, a human body restsnext to the mass of boulder. With only a limited glimpse of hair, the folds of the curled figure reveal rolls of flesh. Unlike the rough crevices of the boulder at center, made literal by the crack that runs from its top, the smooth texture of the figure is accentuated by light. Is it stone or is it flesh? Is it a body made of stone flesh? And what of the folds drawn by light caressing the body? As Deleuze has deliberated, the fold is a process of becoming a “body.”[2] To fold is to enact a vibrant subjectivity which allows the body to assume multiple forms. Thus the body holds the potential for an infinite transformation of flesh. An infinite becoming. Always folding with/in itself, and with other bodies, human and nonhuman, to create affinities of capacious forms.

Yet, again we must ask: is it flesh or is it stone? Through exposing the folds of her flesh, Aguilar’s contours generate “friction and leakage”[3] that challenge the restrictive colonial categories of race, sex, gender and age imposed on bodies. Refusing to be marked as ‘this’ or ‘that,’ Aguilar’s feminist self-portrait challenges such Eurocentric ways of seeing. Art scholar Laura E. Pérez elaborates on the possibility of Aguilar’s nude portraits, as they unfold and “peel away racialized and gendered associations.”[4] Elaborating on this poetic oscillation between flesh and stone, she writes, “Aguilar moves away from socially identifiable and readable bodies, seemingly seeing more environments or settings in which to play with and explore the body’s capacities.” [5] Aguilar explores the body as a way to decode social constructions of identity and to expand corporeal form in more infinite ways. By placing her body beside stone,[6] either in a gentle touch or as an extension of her own body, Aguilar goes beyond linear logics that enforce the dualistic thinking of normative ideas about the body imposed by Eurocentric ideologies. For Pérez, Aguilar’s stone-flesh body, in all its strange splendor, makes visible the un/shaped possibilities of the human body and render visible a body that is expansive in form. 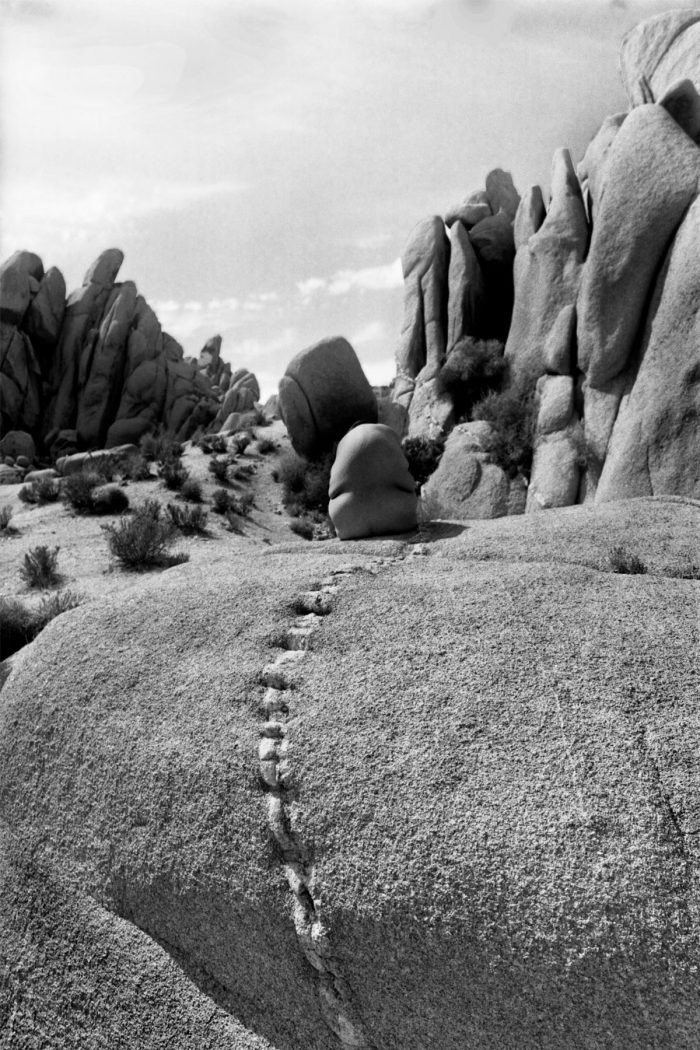 In a poetic sense, Aguilar offers us the potential for a porous body to emerge: one made of both stone and flesh. A hybrid body that is infinite—folding between human and non-human forms. It is a body that is continuously becoming yet refuses to be any one thing. It is composed of dimensions embodying “all manner of ‘becomings’,”[7] and establishes connections among multiplicities. To further elaborate on this bodily expansion, let us return to the playfulness of Aguilar’s photography. This time, let us consider American Grounded Untitled from 2007. Looking away from the viewer, Aguilar’s body not only refuses to be objectified but also obscures any possibility of being traced to ‘humanness.’ Aguilar molds herself into a boulder by posing nude and folding her body in a way that conceals her “identity.” She emulates the body of the stone in order to become an extension of the desert while simultaneously rejecting negative impositions of the female nude. Stone and flesh merge to create an assemblage
of infinite connections and semiotic flows.[8]

To become infinite is to bend, fold and dissolve into the nonhuman.

In this photograph, the line between her buttocks extends to the crevice of two assembled stones. Extending from the bottom of the image to nearly the top, the line of her body extends to the fissures of the boulders. It is this line that accentuates the playfulness of bodies oscillating between flesh and stone. There are no ruptures between the pinkish-brown of Aguilar’s body and the brownish-beige of the boulders.[9] Like Aguilar’s body, the rocks are also alive. The boulders are vibrant matter filled with potential to un/shape the human body. They are an integral part of Aguilar’s infinitude. Their proximity is integral to their porous becoming. Thus this is not about imitation but rather “fostering connections” and “opening of bodies” to create rhizomatic utterances in which “each individual is an infinite multiplicity.”[10] Simply put, another way of being beyond human form.

In the words of Deleuze and Guattari, the body is capable of “becoming among others… becoming-animal, -vegetable, or mineral; becomings-molecular of all kinds, becoming-particles.”[11] It ties together “heterogeneous [and] disparate elements”[12] to create affinities, proximities, and leakages among multiple entities. Aguilar’s photographs incite such multiplicities of becoming in which there are no differences, and no hierarchies, between stone and flesh. Her flesh-stones offers the possibility for the body to transform in an infinite amount of ways. What can the body do? Continuous in variation, both smooth and rough, both flesh and stone, Aguilar extends the human body to reside within a queer “in-between” to create capacious ontologies. Even if incomprehensible to the viewer at first glance, as they may “fail” to fall within one context, the photographs are an aesthetic strategy beyond “humanness” that precludes comparison and are devoid of any kind of homogeneity. Aguilar’s flesh-stones remind us that the human body exists in infinite forms, sizes, and textures across space and time.

Cultural theorists Mel Y. Chen and Dana Luciano further assist in the thinking of the body’s potential of infinity. Writing on Aguilar’s porous body formations, they discuss the “boulderish turn” in the overlap between the nonhuman and human. For Chen and Luciano, Aguilar’s photography of flesh-stones provide new sensations and perceptions made possible by the body. Aguilar’s turn toward the nonhuman, as boulders are not simply landscape in her photography but rather an extension of her own body, is a gesture “[considering] the suggestively queer connections between flesh and stone, between human and nonhuman.”[13] These photographs are queer symbiotic assemblages that negate the perceived advantage of the human body and intellect within nature. Aguilar’s flesh-stones are a source of tactile erotics that afford the body a playful and abundant possibility. Aguilar suggests a new articulation of the body, one beyond ‘humanness’ while offering a new way of sensing an image.

Where does the body begin and where does it end? Perhaps this is the embodied poetics which Aguilar offers: a porous body without a beginning or an ending. It is a body that oscillates between stone and flesh, between human and nonhuman, always arriving to more infinities. To become infinite is to bend, fold and dissolve into the nonhuman. To stay with these flesh-stones is to arrive to one’s own body while simultaneously un/folding into the promise of infinity.

What Kind of Rest Is That of the Blink?