Yɨsɨrihaɨ: Healing that rescues the shadow from genocide

Colombian artist Bárbara Santos gives an account of the making of the book Los Jaguares del Yuruparí (2015), which presents the outcome of more than 10 years of research conducted by indigenous young people from the communities of Pira-Parana in the Colombian Amazon -under the guidance of the traditional knowledge of their elders- on cultural and sacred knowledge related to the territory and its management. 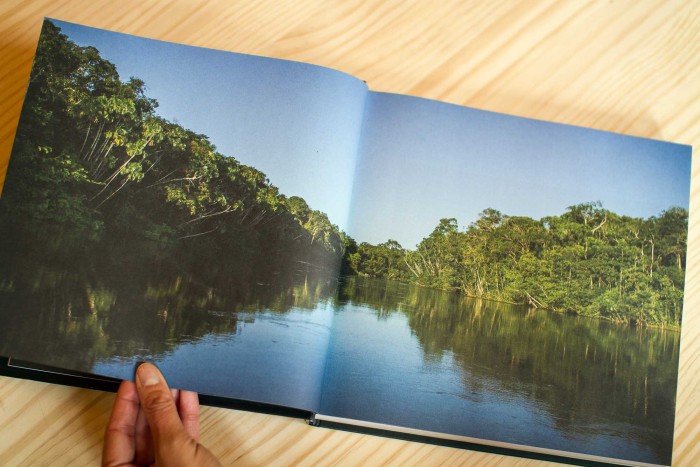 In Colombia, there are 476,400 square kilometers of tropical rainforest that are fundamental for the regulation of the global climate. This regulation depends, in large part, on adequate conservation of this specific territory, which is not possible without the traditional knowledge of thousand-year-old indigenous cultures that have existed to date in a harmonic relationship with these ecosystems.

The literal translation of Yɨsɨrihaɨ is “shadow,” a word from the Barasano language, one of the languages spoken by certain ethnic groups (macuna, tatuyo, itano, eduria and barasano) and the Anaconda People that inhabit the Pirá Paraná river in the Vaupés department of Amazonian Colombia whom wrote the book, – Hee Yaia Godo ~Bakari-: The Territory of Jaguars of Yurapari.(1) Traditional knowledge of environmental management from the people ethnic to the Pirá Paraná river.

The history of this book, in particular, ends at the beginning. It was created and protected by many people in recent years and by past generations alike. It was published in November 2015, after 15 years of research and 10 years of editing. The book presents the legacy of the ancestors, Ayawas, through knowledge transmitted thanks to the guidance of traditional medicinal shamans, the ~Kubua. It was written and illustrated, in its entirety, by 90 indigenous researchers accompanied by a team of advisers from the Gaia Amazonas Foundation, as well as editors, linguists, anthropologists, lawyers and artists from “the outside world.”(2) 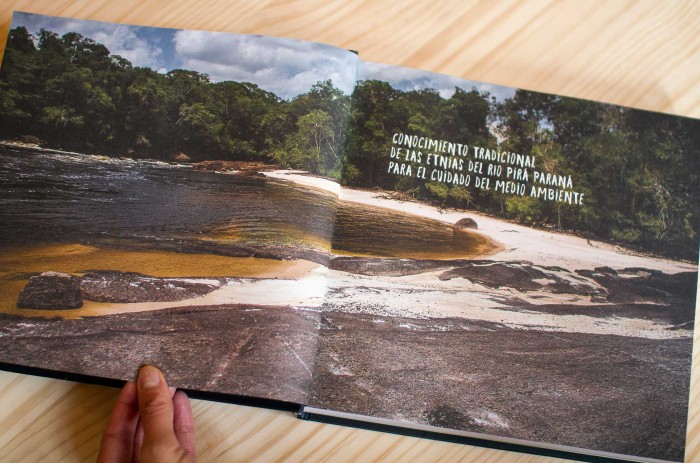 The knowledge or origin of life story of the Hee Yaia Keti Oka ancestors has been recognized by UNESCO as Immaterial Cultural Patrimony(3), in recognition of the spoken knowledge of Keti Oka as a thousand-year-old technology transmitted from person to person through a network of outposts and sacred places in the Great Territory of the Hee Yaia – Yurapari Jaguars.

“Keti translates to “news” or “story”; Oka means “tongue” or “jaw.” Keti Oka is “origin story” – ritual singing and knowledge that comes from the body, sacred dance and words at the same time.”(4) In this way, the research, editing and creation of the book was a generous precipitate of Keti Oka, not only because of the texts narrated, but also because of overlapping temporalities, matrixes and dimensions used for the translation – represented through images, comics, photographs and maps of landmarks or thousand-year-old sacred elements.

According to data from the ONIC(5), 35 indigenous people were murdered in 2015 and 3,481 where forcefully misplaced. Between 1998 and 2008, there were 1,980 registered homicides of indigenous people. There is no trustworthy data about the missionary acts of torture and annihilation of hundreds of Amazonian cultures between the 1920s and 60s. The genocides of more than 70,000 indigenous people by the Casa Arana Company during the rubber war at the beginning of the 20th century hasn’t been recognized either.

For those of us in Colombia who were “educated” far away from the Amazon, from the deep plains and high mountains, at the beginning of the 90s (when the declaration of the 1991 constitution recognized the country’s ethnic and cultural diversity), the indigenous population was apparently extinct. But in recent years we have seen a resurgence of a sparse indigenous population that makes up 3.43 percent of Colombians.(6) In this way, today they are somewhat recognized, but, at the same time, they have become more vulnerable. The imminent threat from mining (legal and illegal) and the ominous apocalyptic visions of the ~kubua has led to this knowledge – protected by the Anaconda People with bravery and wariness since the beginning of their domestic lives – being translated and written by the same group into the book, The Territory of Jaguars of Yurapari. At the same time, the resurgence makes our ignorance and lack of comprehension more evident, about a knowledge that lives in the forests, cooling them, calming our relationship with the natural environment. This book (interface) demands that we amplify out vision, recognize our losses and accept the intrinsic relationship between word-dance, technology and nature. 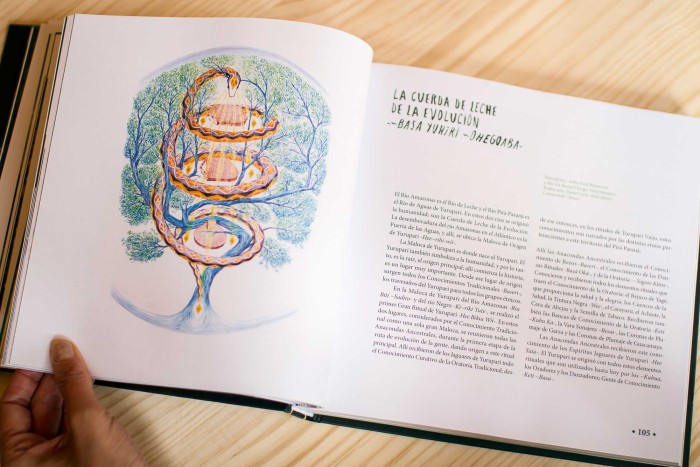 Here I transcribed fragments of a conversation we had a few days ago in Bogotá with Yeba-Boso Roberto Marín of the Yeba-barasano people, member of the editorial committee of the book and one of the most important regional leaders. His work, as he puts it, is to communicate with “the outside world” and uphold the necessity of the instructions of the traditional Hee Yaia Keti Oka “system,” for the protection of the territory and the environment for future generations.

Bárbara Santos: What does Yɨsɨrihaɨ mean?

Yeba-Boso: How should I say it? It’s like the shade of a tree. Like how trees have branches that leave shade beneath them, where it isn’t hot anymore, different from the earth where the sun falls directly and there aren’t any trees. For us that shade is Yɨsɨrihaɨ, that is to say that the cures serve as shade against illnesses, for the protection of the people and the land.

BS: If Yɨsɨrihaɨ is shade, is that shade a form of healing?

BS: If it’s a form of healing, a cure of the Hee Yaia territory, does that same cure protect you when you leave the territory?

Yeba-Boso: No. Every time I leave the territory I lose a special healing. As prevention, like a shadow that will protect me, the shaman, ~kubua, studies the exits to streets in Bogotá, like a diagnosis, in order to recommend one.
If we want to call the cures protecting shade, that’s what it is. That shade isn’t anything more than remedies and it only works if someone complies with what the ~kubua traditions recommend to them, because the system isn’t going to attach to you, but what every person does is their own decision. 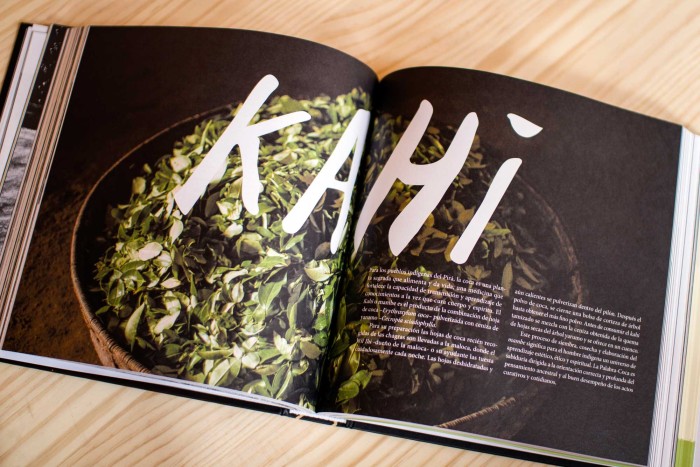 BS: Is that to say that this shadow makes us invisible? Does this explain why those who inhabit the Pirá Paraná River were protected from the indigenous genocide in the amazon?

BS: That is all so beautiful. That form of curating is a form of resistance for me.

Yababoso: (Laughs) ~Kudi Saare – disguise, hide. It’s like the uniform of the body, Hoa tuti~bidire, like the Water People (macuna) say, like adding another layer over the uniform of the hairs, something like that.
It’s giving the power of protection to you.
My father in law said it even included protection for the boys that were recruited by the army or the guerrillas, the cures have to hide the recruited one. Pistols have bullets, no? But between those bullets there are some that are empty, between one bullet and another. So, the ~kubua hide the recruited one there in those empty spaces, between the bullets they are protected and no shot will hit them. His life is protected in those empty spaces.

BS: What an example!

Yeba-Boso: I have never thought about it. (Laughs) 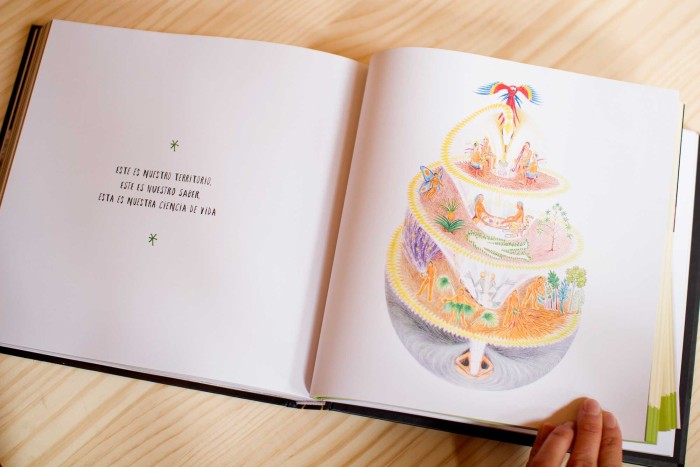 Even though this book was configured generations ago and required years to be elaborated, in some way, it’s only recently begun. Being read makes it real, but within its pages there is only a breath of the Hee Yaia Keti Oka knowledge, which is impossible to grasp and departs from the way those in “the outside world” have configured the world and our relationship with nature.

The force of the Keti Oka knowledge has already been attacked by mining companies like Cosigo Resources, which sought to extract gold from within the Yaigojé Apaporis National Park. After six years of litigation, in September 2015, the National Constitutional Court of Colombia ordered an investigation and the suspension of mining activity by the company in the region, planting a one of a kind precedent.(7)

Keti Oka rises up as a form of resistance that invites us to rethink collectively, requiring our combined effort and togetherness for its protection. Colombia is in the middle of a peace process that will soon be finalized. Hopefully the effort of the Anaconda people to translate this knowledge doesn’t fall through the cracks and our blindness can be fed by the resilient courage implied by the words of lawyer Álvaro Velasco(8): “This book shows how the process of dialogue and exchange during recent years has moved us, has connected us somehow with the origin of life, from which we have been disconnected for some time. Those who were born in this country have to be able to preserve and create dialogue between such unique cultures so deeply rooted, so integrated into one another. This will continue to be a country to be deciphered, a deep Colombia, that’s what we are.” 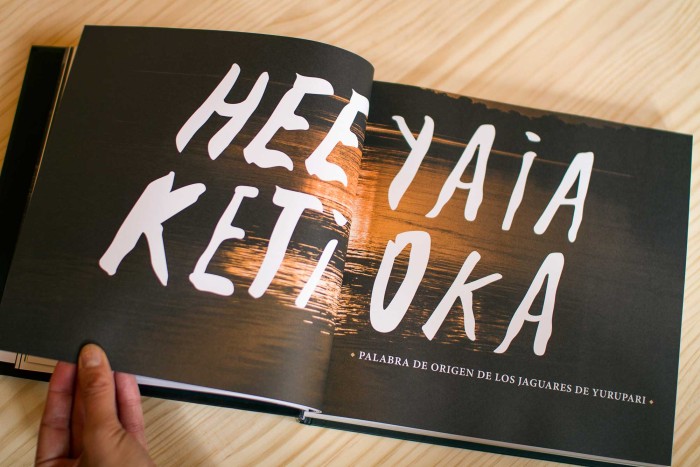 Coming back to the words of Yeba-Boso, Roberto Marín, it is important to frame and recognize this book, – Hee Yaia Godo ~Bakari-: The Territory of Jaguars of Yurapari, as an interface, because, without a doubt, it’s a technology that necessarily requires action. It’s a medium that speaks about respect and allows for the discovery of health through preservation and care for the forest. Health from a living thousand-year-old spoken knowledge, Yɨsɨrihaɨ curing Hoa tuti~bidire, through the rituals that communities practice today to attack the systematic extermination of the people and beings of the forest.

Hee Yaia Godo ~Bakari-: The Territory of Jaguars of Yurapari, implies, without a doubt, stopping the rampant development of excavation in the Amazon, in order to rethink our socio-environmental contemporaneity constituted by unique cultures and knowledge. Curing is the health of the forest, which isn’t anything other than the air we breathe. 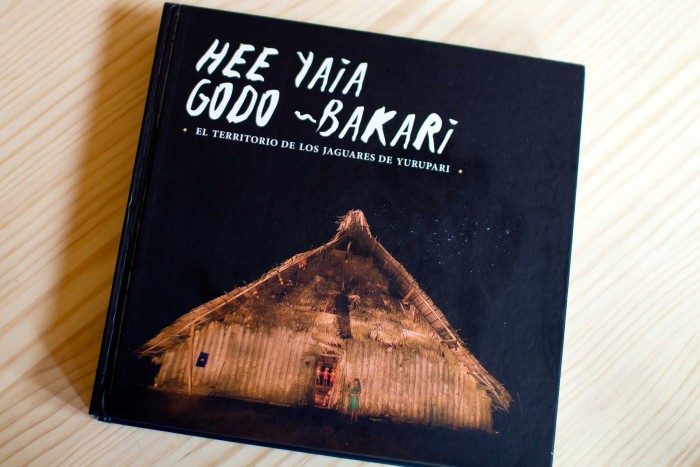 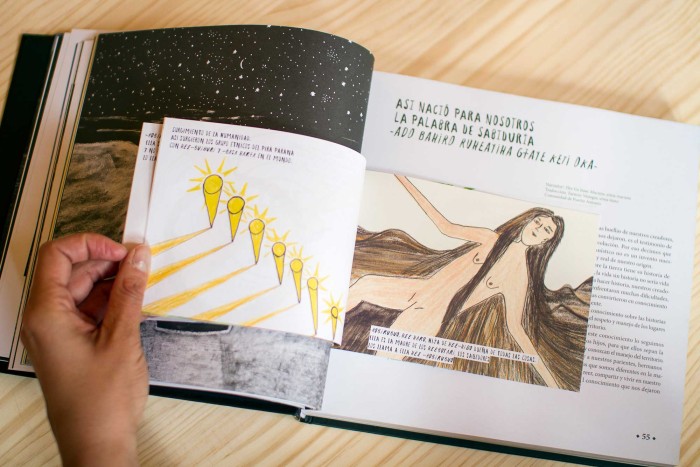 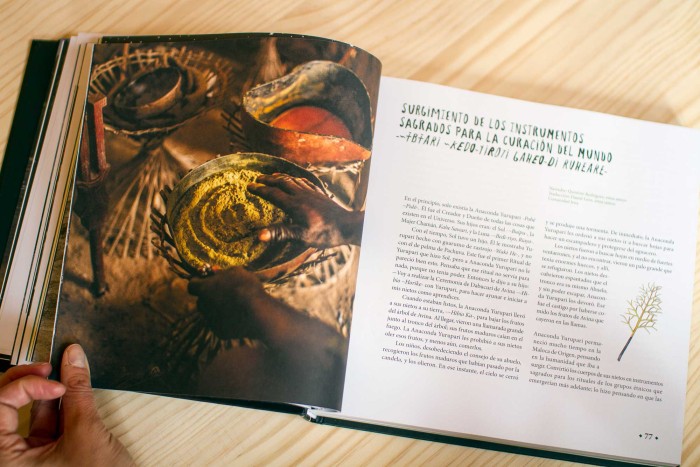 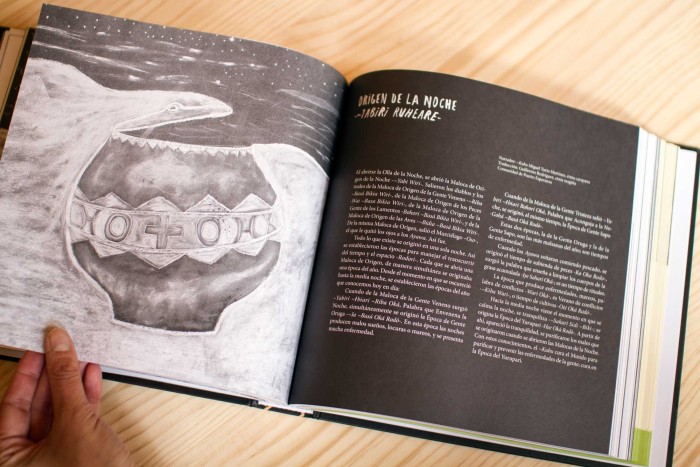 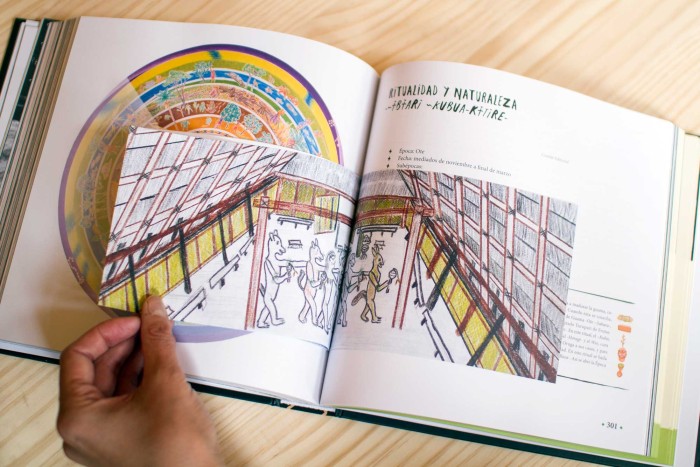 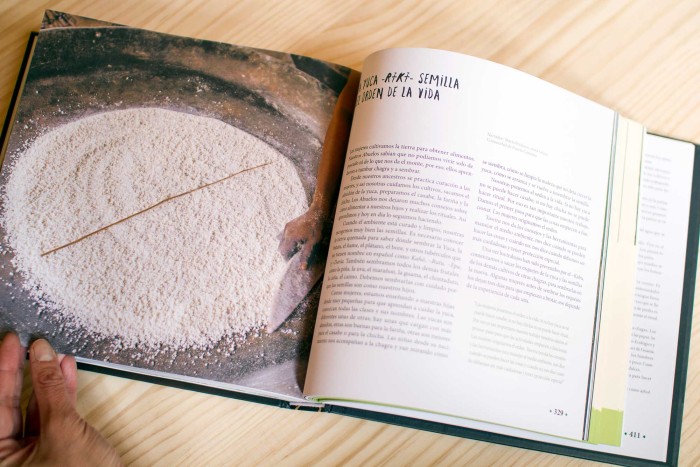 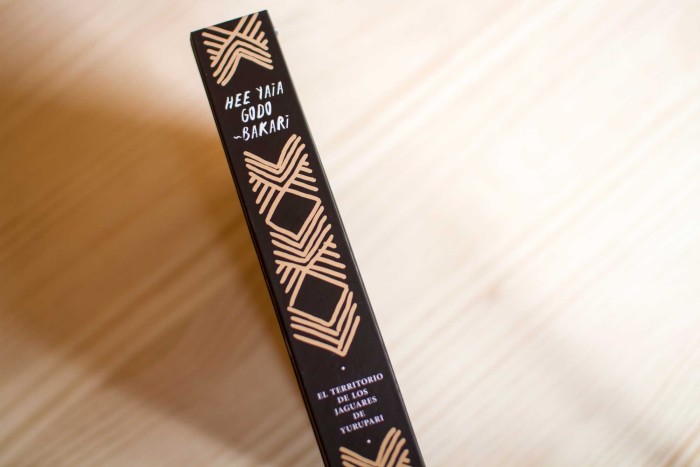 A discussion with contemporary Nicaraguan Artists