…and how it may resonate today. 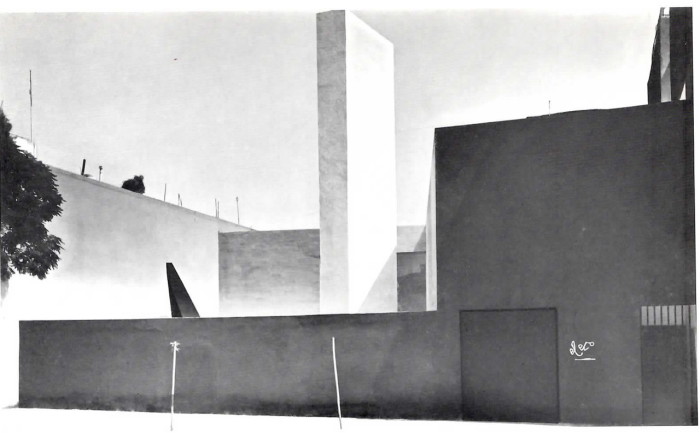 Mathias Goeritz and the hegemonic impulse

Long respected as something of a Mexican national treasure, the German-born, naturalized-Mexican artist Mathias Goeritz is at the time of the writing of this text the recipient of significant international attention, thanks largely to his retrospective, “The Return of the Snake,” at the Reina Sofia, which ran from November 2014 to April 2015 in Madrid. This traveling retrospective, which just opened at the Palacio de Iturbide in Mexico City and will thereafter travel to the Museo Amparo in Puebla, Mexico, offers a unique and valuable opportunity to appreciate and evaluate the overall output and ongoing impact of this complex, highly controversial and protean figure, especially within the context of postwar modernities. Perhaps more importantly, it offers the opportunity to not only consider his work then and now, but also the similarities between his epoch and our current one, as well as some of the issues at stake in each moment. 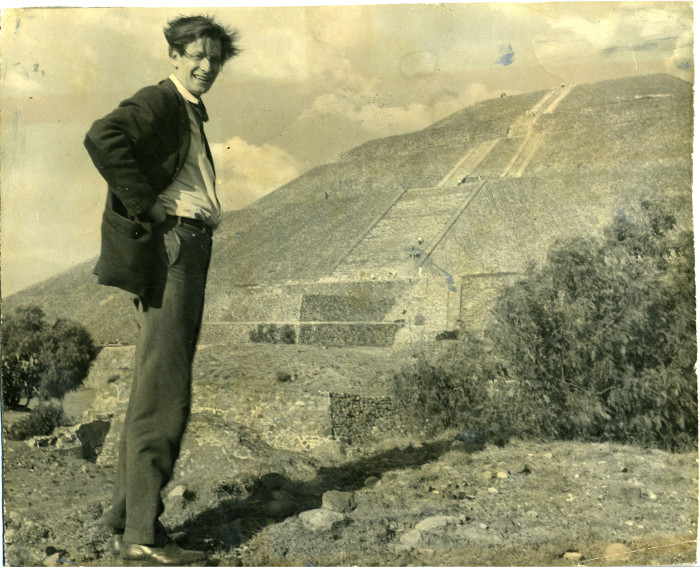 Probably most famous for inventing the term “emotional architecture” (which is in fact, something of an architectural hapax legomenon), Goeritz was born in Danzig, Germany (today Gdansk, Poland) in 1915, and after a stint in both North Africa and then Spain, moved to Guadalajara in 1949 and then to Mexico City, where he lived until his death in 1990. An art historian, sculptor, and painter, he came up with the term and corresponding manifesto “emotional architecture” at the inauguration of the Museo Experimental El Eco in Mexico City in 1953, which he designed (also the city’s first museum of modern art). Devoid of so much as a single right angle, this singular piece of architecture, which resembles a cross between a set from Expressionist German cinema and a De Chirico painting, was conceived in response to what Goeritz saw as the stultifying effects of the rationalization of international style in modern architecture. Having arrived in a post-revolutionary, heavily pro-nationalist atmosphere steeped in the social realism of the muralists, Goeritz’s many innovations, ranging from non-figurative or abstract sculpture to monochrome painting, represented a kind of taboo cosmopolitanism, and for some figures even represented a damnable complicity with capitalist imperialism. As such, he and his work were severely criticized and in some cases rejected, and he was ultimately undermined (for instance, in a well-known incident of public opposition, when Goeritz was named museógrafo at the Universidad Nacional de Mexico in 1954, David Alfaro Siqueiros and Diego Rivera published a letter of protest in the newspaper Excelsior demanding the repeal of his position, which was actually met with success). 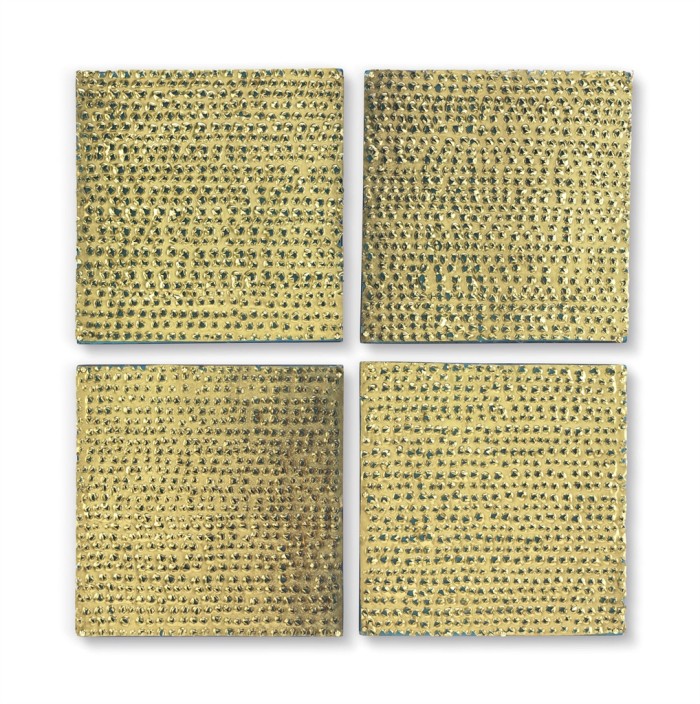 From the point of view of the current moment, the most intriguing aspect of Goeritz’ practice are his Mensajes. Started in 1959 after the death of his wife, the photographer Marianne Gast, and carried out through the beginning of the sixties, this series consisted both of two-dimensional gold monochromes and monochromatic murals. According to the meticulous study of Goeritz’s work by Daniel Garza Usabiaga (1), these works belong to the openly and intensely religious period of his artistic output. Categorically spiritual, they were meant to counteract the chaos of modern life through gesturing toward some kind of religious and transcendental experience. In other words, their intense materiality was about immateriality (a splendid pirouette of illogic of which only art, at least for the time being, is still capable). Of course, even at the time of their production they were riddled with retrogressive contradictions regarding the spiritual in art. For all the progressive and revolutionary aesthetics of the monochrome, mostly unseen in Mexico at the time, they were still rooted in a retrograde tradition of early European modernism and so-called spirituality. 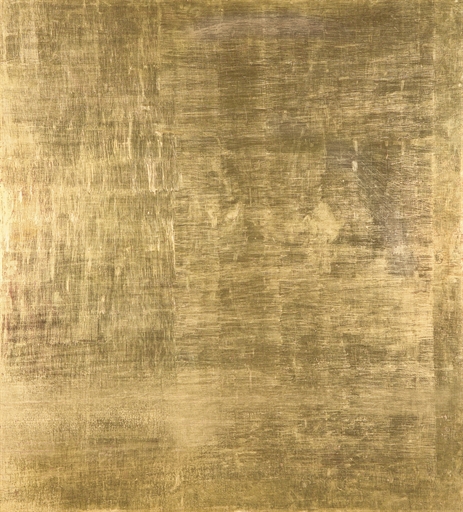 As such, it is difficult to call them monochromes in the sense that is now generally associated with the monochrome, which is more about its own materiality and color than a means to an end, which in the Mensajes is light and spirituality, and even more to the point, god (In hopes of underlining the work’s relationship with light, Goeritz created dramatic strategies of exhibition in which the Mensajes were, for example, lit only by candlelight). According to Garza Usabiaga, Goeritz was critical of the so-called realism of some currents such as the Nouveaux Réalistes in France, in the sense that their work merely replicated and perpetuated the chaos of everyday life. “To counter this type of practices [sic], Goeritz championed an art of stable referents, and as he said, God was the most stable of all. […] Light is a perfect way to represent this religious referent. The monochrome works in the same way. As the zero-degree of representation, it is a symbol of ‘the whole and of nothing.’(2) Almost ironically, once abstraction and the monochrome later became accepted in Mexico – and largely thanks to his efforts – Goeritz himself became critical of their apparent status as mere merchandise. 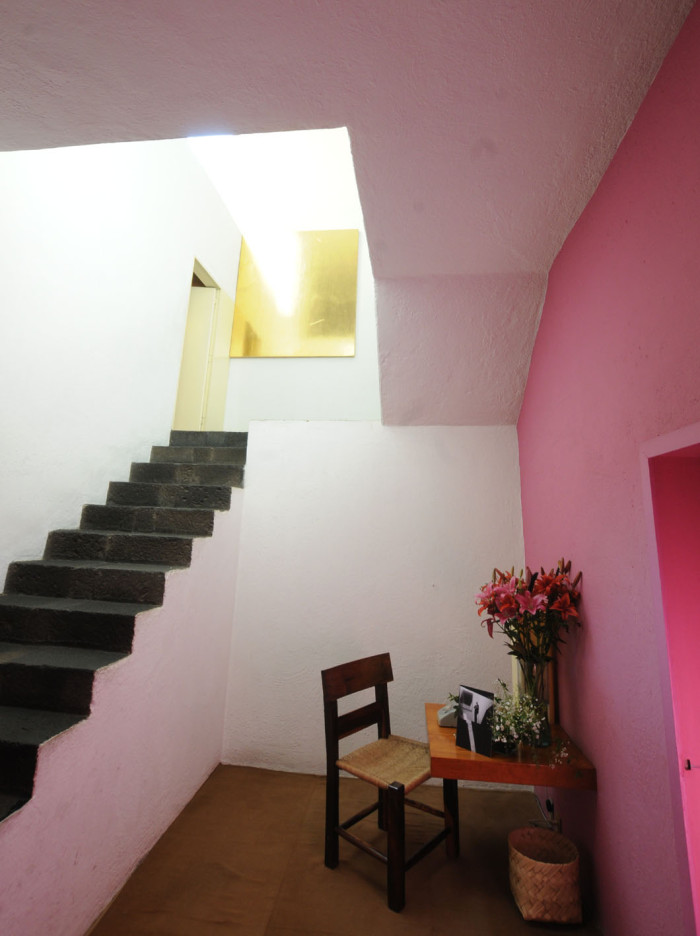 View of a Mensaje (Message) at Casa Luis Barragan, Mexico City. Via arteycultura.com.mx

It is for these reasons that when all is said and done – and this is admittedly a radically ham-fisted simplification of a very complex historical conflict – one can finally recognize similarities of agendas between the muralists and Goeritz. In the truly dogmatic spirit of the European avant-garde, and whatever their relationship to the production of objects might have been, they both essentially saw art as a means to an end, which was as pedagogical as it was ideological, and which zealously promoted, or rather proselytized a “correct” way of life. They respectively fought for a hegemonic position, as it was natural for an vanguard artist at the time, at the natural exclusion and ideal suppression of all the others. Therein lies what is possibly the greatest “evil” of not only modernity, but even contemporary art (unfortunately, this intolerant, anti-pluralistic, winner-take-all mentality is still very entrenched in certain parts of contemporary practice). Artistic manifesto positions of the time can be seen from our times as essentially retrograde and conspicuously reminiscent of religious fundamentalism, as they always sought to establish an aesthetic orthodoxy, which itself inevitably led to conservatism (we know now that orthodoxy must always be protected from the unorthodox and protected from heterodoxy). But here’s the good news: The conservative and retrogressive always loses, historically speaking.  For better or for worse, this is an immutable law of (art) history, and if there is any lost cause in the history of art, it is the repression or retardation of change –  which, it just so happens is often enforced by either the academy or totalitarian states. Of course, for any art professional who is truly committed to what they are doing, the hegemonic temptation, retrograde in of itself, is always there, but this is the temptation that must be resisted.

How objects from processions turn into anthropological artifacts

Curator Diego Ventura Pac-Coyoy shares reflections on the bicentennial celebration of independence in Central America to raise questions about the relationship of cultural work with that narrative, inviting a reimagination of the idea of “nation” that the Central American community forms through the arts.